If you’re going to Boomtown for the first time this year, you might have heard about the Boomtown Maze. But do you know what it is or how to get round it?

If this is something you have been wondering, or if you want some inside information on The Maze this year, I have written this guide for you! 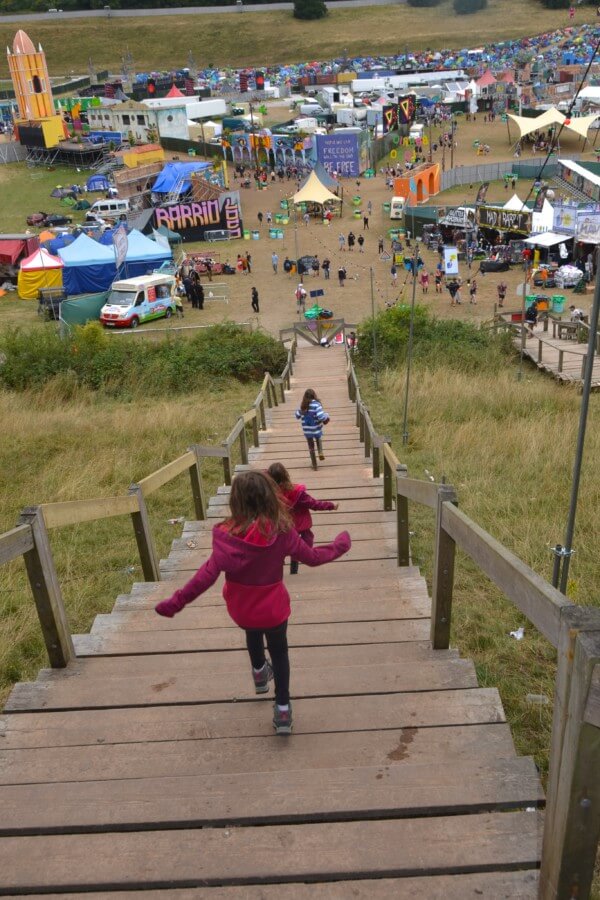 So what is it?

The Maze at Boomtown is an incredible work of creativity, on an immense scale.

The best way I can find to describe The Maze, is as a giant interactive theatrical treasure hunt. But this does it a disservice because it is so much more than that.

It’s the largest interactive event of its kind in the UK, with a cast of nearly 2000, and an ongoing story that has developed and progressed over ten years. There are so many buildings, areas and secret rooms to explore that most of the festival goers only ever see a tiny fraction of it.

My children described it as “like being inside a story and you’re one of the characters; like a detective trying to solve puzzles”.

Last year was our first year at Boomtown. Although I had heard of The Maze, I was unprepared for the sheer size and complexity of the thing. We thought it would be easier to get into the secret venues. But if they were part of one of the storylines we got turned away. We didn’t know where to start! With children in tow it’s more difficult to just wander round and find out for yourself.

So I picked the brains of the Creative Director of The Maze, Martin Coat. I have put his inside knowledge together with my own experience to produce my top 5 tips for getting the most out of The Maze with children.

I hope this helps you to dive straight in!

Top 5 Tips for playing The Maze at Boomtown

1. Download the app or get the Daily Rag newspaper

The app has been improved this year to make it easier to get into the story. It is best to download it in advance. It is called Access AMI and is available now on IOS or android.

The best way to play The Maze is using the app. It will show you where to start your adventures in each district. You can also tailor it to suit what sort of experience you want.

If you don’t have a smart phone don’t worry you can still play. You can find clues in the Daily Rag, the Boomtown newspaper. The Daily Rag is available around the Town Centre or at the Daily Rag office, on the Main Drag.

Another good place to start is the Post Office also located on the Main Drag. There they will give you a clue to get you going. It’s great if you’re stuck. I asked them for a ‘short quest’ at one point – if you explain you’re with children the staff will usually help you out.

The app has an interactive map. If you are new to Boomtown you definitely need one! There are also paper ones available or you can always print out your own. 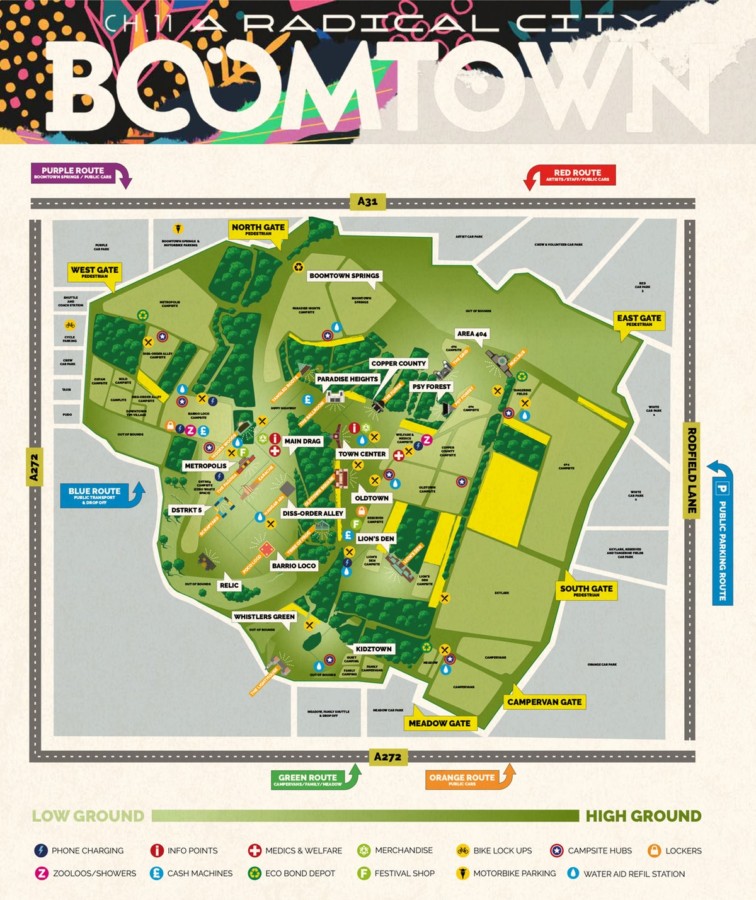 2. Talk to all the characters

The main part of The Maze runs from 1pm to 7pm on Friday, Saturday and Sunday of Boomtown Fair. Although there are events that happen outside of these times.

During this time in every district there are characters wandering around, and all of them have information. If you go up to any of them and say “Do I know you, friend?” they will give you a clue. However there’s no harm in questioning them further!

Don’t worry too much if you don’t know what’s going on all the time. Sometimes things won’t make sense, as there are so many paths through The Maze. There are also lots of dead ends and red herrings. It’s best to go along with the fun, and just enjoy it.

3. Collect several stories at once

Some of the storylines are short or involve solving a puzzle or doing a task to make some money. These are usually the best ones for the children to do. But many of them are like a treasure hunt through the festival and send you to several different venues. This was a bit too much walking for my little ones. 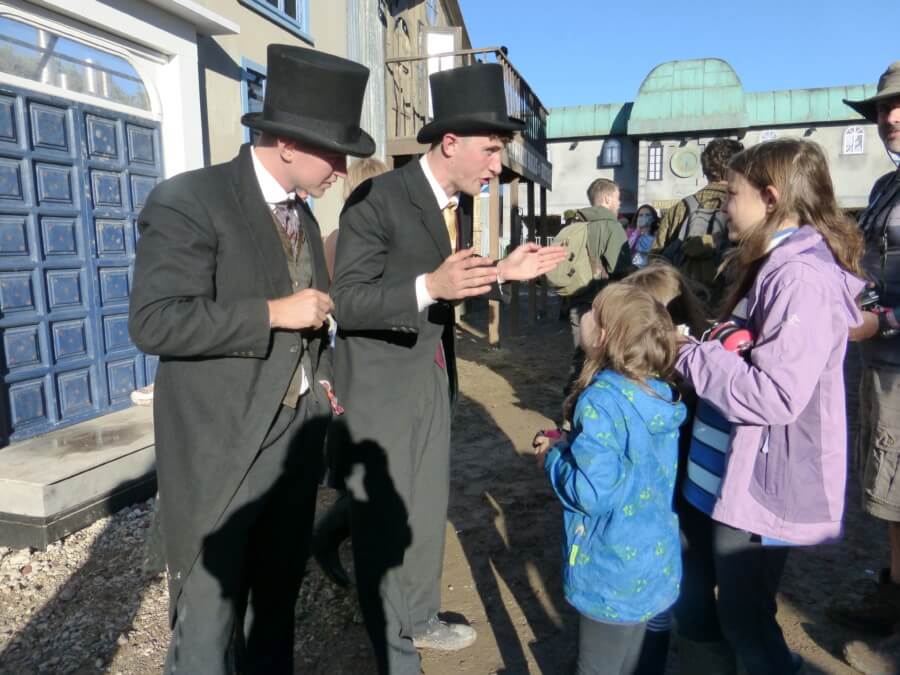 We found it was good to pick up as many storylines as we could whenever we were in one district. If one of them led to another district we’d put that on hold until we visited it. It allowed us to complete more of the story with less walking.

Good places to try: The Job Centre and The Police Station (in Town Centre), Hotel Paradiso (in Paradise Heights) and The Croaker Club (in Copper County).

Ivory Towers Academy in the Town Centre is a new venue; a University actually run by Bath Spa University! Here you will be able to study for a profession, which will definitely appeal to your more academic kids.

Try to make some Boomtown money early on. The Job Centre is a good place to start. Then, if you can’t get in somewhere or are stuck for a clue, you can always try a bribe.

Bribe, bribe and bribe some more!

It’s one of the best ways if you’re with kids. I found that the kids got offered more paying jobs too, and characters were more likely to give them money than me.

The Maze is a place where being cheeky and asking for more than you’re offered sometimes pays off – so is perfect for children who are always doing this anyway!

I heard you can also use the money at some of the bars… I didn’t know this last time but I’m definitely trying it this year!

The Maze gives you back as much as you put into it. If you become characters in the story when you talk to the other characters they will treat you differently. Dressing up as characters is the next step and a great way to get your children more involved. We didn’t do that last year but this year we have our costumes ready!

There are so many different options – wild west, pirates, scientists, time travellers, futuristic – just go for it! Although be aware that responses from characters will be different depending on who you’re talking to. For example someone might not trust you if you’re a pirate!

If you have the time before you go you can read up on the full background story of the city and its characters. There is even an online part of The Maze to crack before you go, that will get you into secret areas. The best place to start with this is the Boomtown Story Facebook group. I had a go and it’s lots of fun. But it’s not necessary to do any of that if you don’t have time. You can just explore the story once you’re there.

Although The Maze is suitable for children of all ages, it does explore some serious adult themes. It is up to you to decide whether you want to approach these things with your children.

For example, last year we ended up in a religious ceremony which was an obvious parody of religion, which might offend some people. We also bribed our way through a door into a demon barbers which was decorated in doll parts covered in ‘blood’. My kids thought it was funny but younger children could be frightened. If you are worried, check the room before you take your children in there. It’s also good to ask the characters; they are always helpful.

We didn’t have any problems, although it opened up some serious conversations with the kids afterwards that I found quite refreshing!

What do you think?

Have you attempted The Maze with your children? What were your experiences?

See more information on how family friendly Boomtown is…

Have a look at what’s new for families this year..

Read our reviews from previous years..

Go to the Boomtown Website for more information and tickets!

One thought on “Into The Boomtown Maze…”