Yup – that’s what I thought when I came back from a weekend away and found Steve had bought an old builder’s van that he hadn’t seen on eBay. I wish I kept the photo – it was nothing too pretty, just an ordinary VW T4 Transporter:  Why???!!!

The next day I was dragged out to go and pick the sorry thing up from a decidedly dodgy bloke in a decidedly dodgy area.  I hated that van.  I hated not being asked if it was OK to buy a bloody van.  I hated looking at that ugly white hulk of metal sitting sadly on our drive day after day.  I was convinced it would fail its MOT, turn out to be stolen, or show up on some HPI checks… but it didn’t. 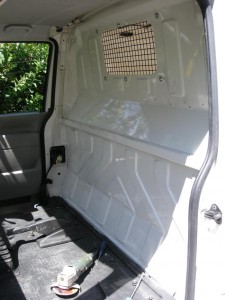 I’m not against campers.  We had a lovely camper before, we even used her as our wedding car – she was gorgeous, a 1972 lemon yellow VW Bay, lowered, resprayed and very customised.  We sold it because we didn’t have a garage for it and felt it was time to move on but I don’t think Steve ever could stop feeling that was a big mistake.  So I could’ve handled having another camper, I would’ve welcomed it with open arms… but this thing on our drive was a soulless builder’s van – it didn’t even have enough seats for us all!  But it was going nowhere soon so eventually I had to give up hating it and make my peace with it.

Towards the end of last summer, Steve started to work on it.  He obviously had a vision that I just couldn’t see.

First he had to get the bulkhead out… I think he wore out two angle-grinders in the process and made enough sparks to convince the neighbours that Fireworks night had come early.  Thank God the kids have ear defenders – the noise was awful!

The next stage was to send it off to have a pop-top Reimo-style roof fitted so the girls could have a bedroom to sleep in.  When she came back, suddenly something changed for me.  I even stopped calling her an ‘it’.  You could actually sleep in her now.  The girls were besides themselves with excitement.  Bizarrely, they rushed to get their ukuleles and do a spontaneous gig in the back of the van!  So maybe this was going to be fun after all…

Putting the windows in really scared me.  Cutting a big hole in the side of a perfectly good van just seemed wrong!  I mean, what if we got the measurements wrong?  That would be an expensive mistake… but I just held my breath and trusted my genius husband and now look at them:  blinging nice windows if I do say so myself!  Of course Steve now wants to lower it and get alloys (honestly, what is the point?!) apparently most people would understand why alloys are important… but not me! 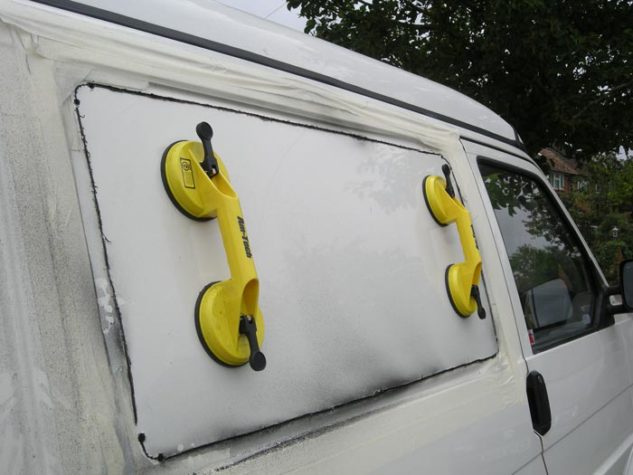 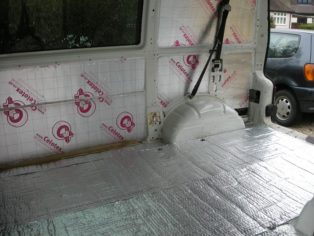 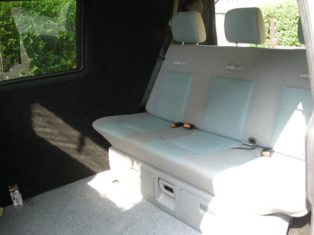 Steve finally tracked a back seat down on eBay,  ‘Ah great!’ I said, ‘does it turn into a bed?‘ – ‘Err no,’ Steve replied,  ‘it hasn’t got that section…’ Well, we never did track down the section for the bed so Steve ended up making one.  One day I’ll get round to upholstering it but it works just fine for now.

Steve insulated her all over with those fancy insulation boards with foil on the sides to keep us cool in summer and cosy in winter and then covered the walls with a felt fabric and carpeted the floor.  She’s starting to look great, and she’s definitely not a builder’s van anymore!

Next on the to-do list is swivel seats, and getting my Festival Kidz decals on, and somehow getting a kitchen unit in there.  I’ll let you know our progress.

I’m properly trying out my new fabulous Outwell Country Road awning from Just Kampers weekend after next.  I’ll let you know how we get on. 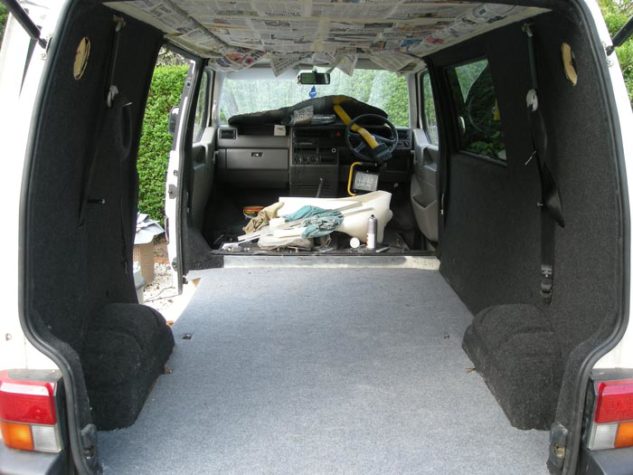 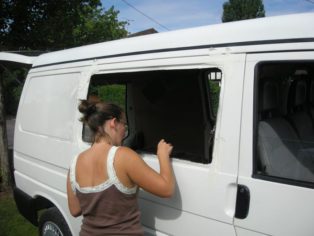 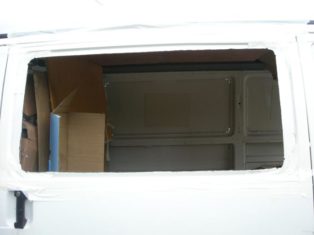 Cutting holes for side windows 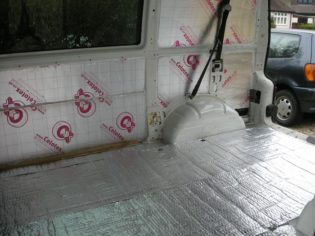 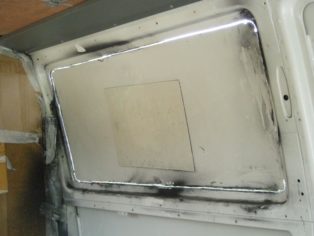 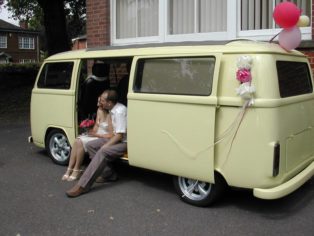 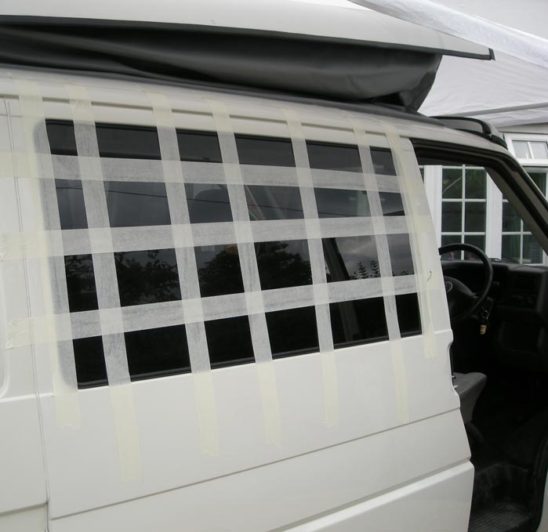 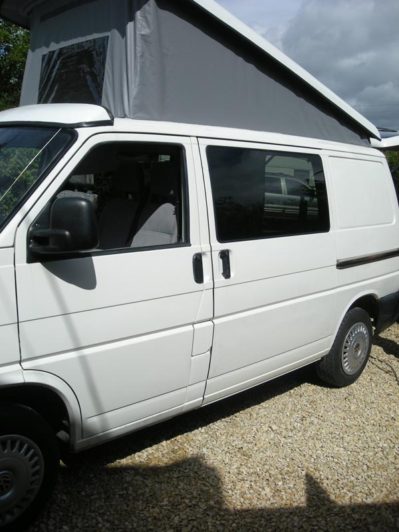 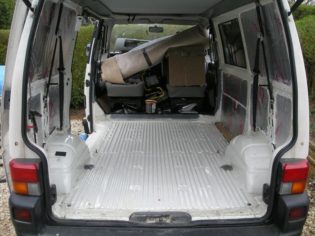 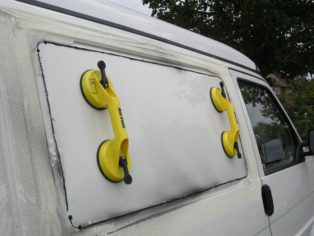 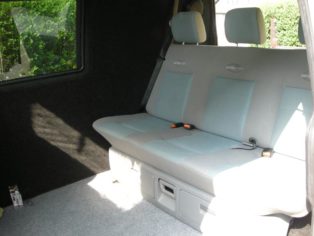 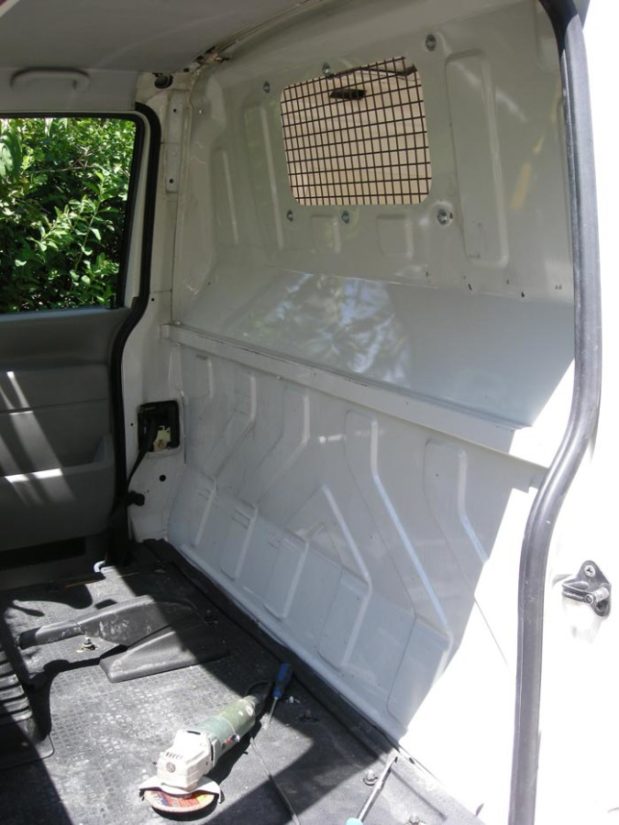 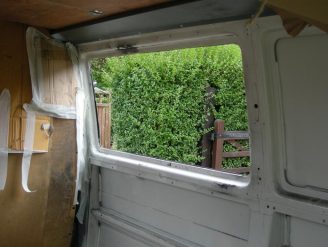 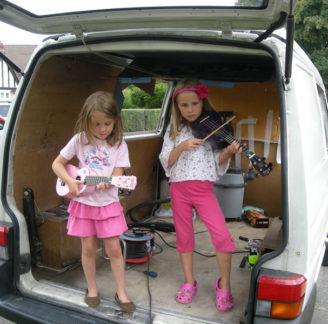 Spontaneous gig at the Van Stage 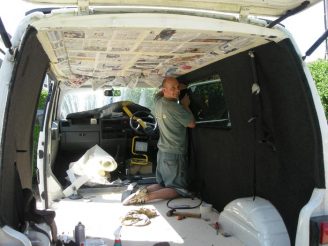 7 thoughts on “The Camper Van Saga”