This year England’s Medieval Festival celebrated their 25th year. There was drinking, dancing, feasting, fireworks and (historically accurate) fighting. We were there with Evelyn (8), Martha (4) and baby Ada to party like it’s 1399. 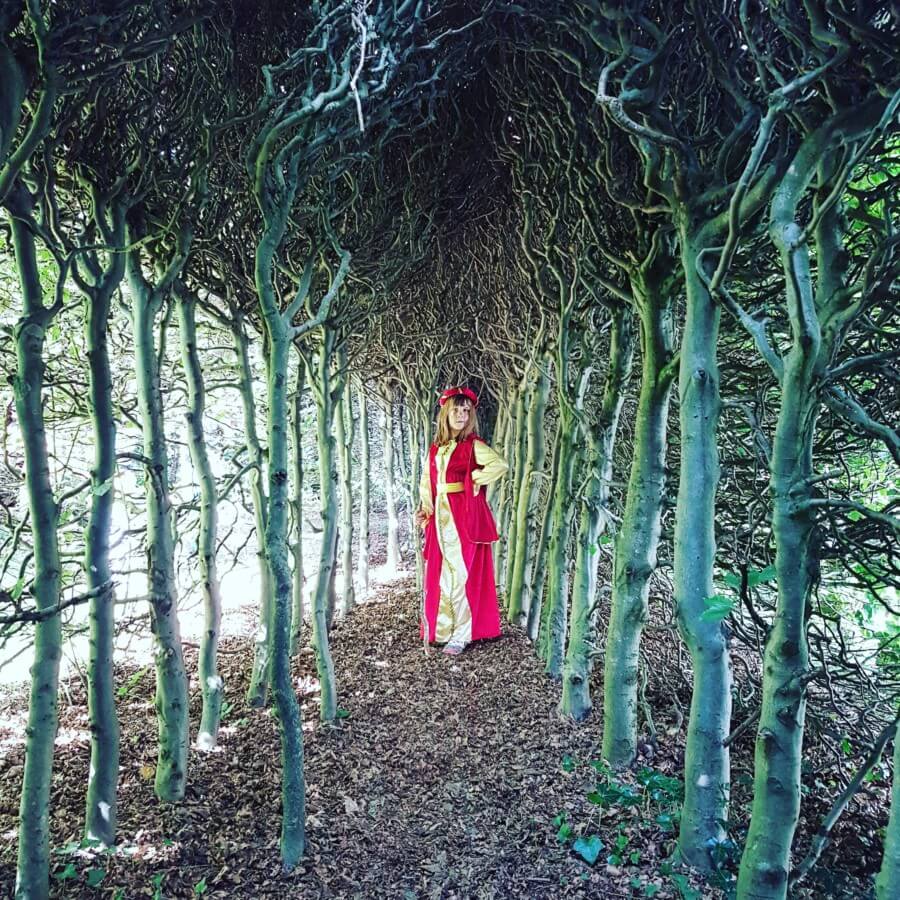 I’ll be honest, most of my knowledge of the Medieval period comes from the trashier end of historical novels, so I wondered if I’d be a bit out of place at a festival full of historical reenactors. I needn’t have worried. You could turn up for the day in Jeans and T shirt, full armour or anything in between with a bit of cosplay thrown in too if you prefer. For children it was heaven and within minutes of setting up camp there were princesses with battleaxes chasing knights with swords all around the field.

Most visitors to England’s Medieval Festival come for the day but we decided to camp and were very glad we did. For one thing there is so much to do we would never have fitted it all in a single day, but there was also a program of evening events just for those who stayed.

The camping itself couldn’t have been easier. We were directed towards the family area and easily found a large, flat (some of the field was on a slope) area of thick, comfy grass. We were even able to park the car next to it while we got set up, so no lugging kit from the carpark. There was plenty of room and, even when everyone was set up, there was space for kids to run around and play / do battle. 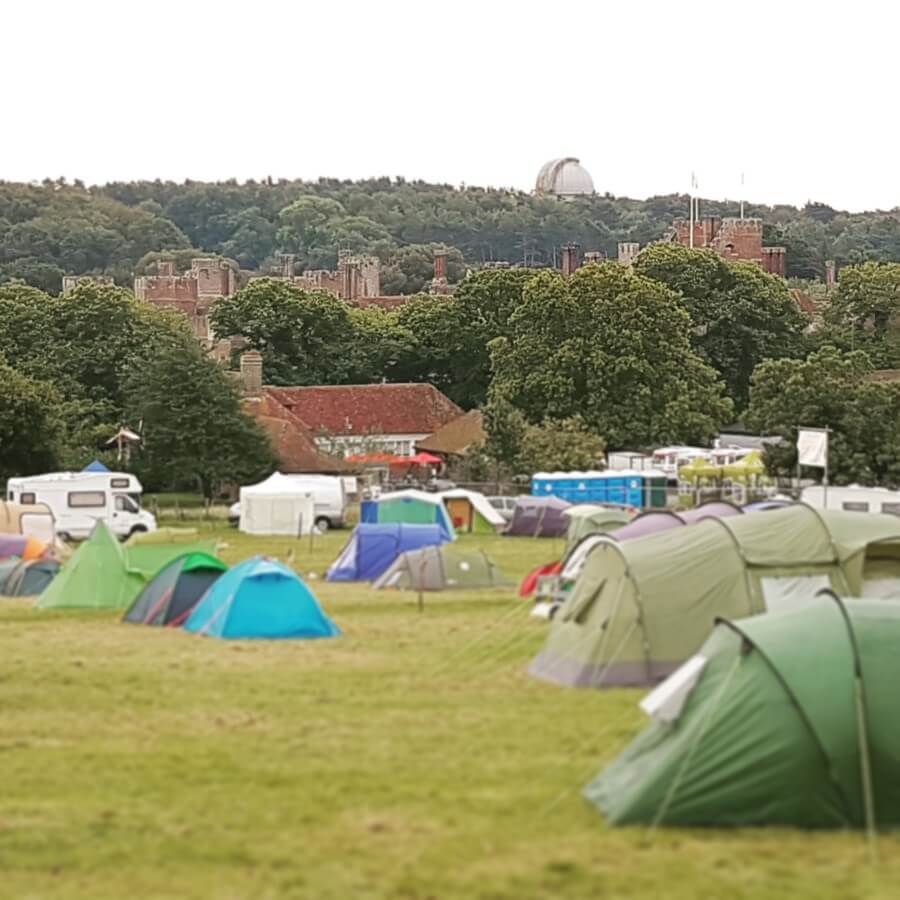 There was also a glamping area, a general camping area, a separate section for the participants and, within the site itself, several groups camping and living as they would have in Medieval times. If you didn’t fancy camping but wanted to join in the after hours fun there was BnB accommodation on site too.

In the evening the campsite was full of little campfires (firepits could be rented on arrival) so even though we had to head back to the tent early with happy, exhausted children, we were able to enjoy sitting outside under the stars watching the smoke drift past the castle, listening to the music from the Buxom Wench tavern. If you ignored our rather 21st century tent it was possible to imagine we were a Medieval army laying siege to the castle.

We spent our first day at the festival seeing the big shows. In the morning we watched the grand parade and castle siege complete with arrows, guns and even a trebuchet. Then the Knights of Camelot took to the main arena with stunning horseback displays of knights training games and jousting. I had assumed this would all be carefully choreographed but it wasn’t.

The horses genuinely thundered towards each other at great speed with lances splitting as they struck armour. It was  all the more impressive given the sudden return of summer. Apparently you could fry an egg on a knight’s breastplate afterwards.

Also in the main arena we saw a falconry show and learnt something about the history of an activity dating back 12000 years. 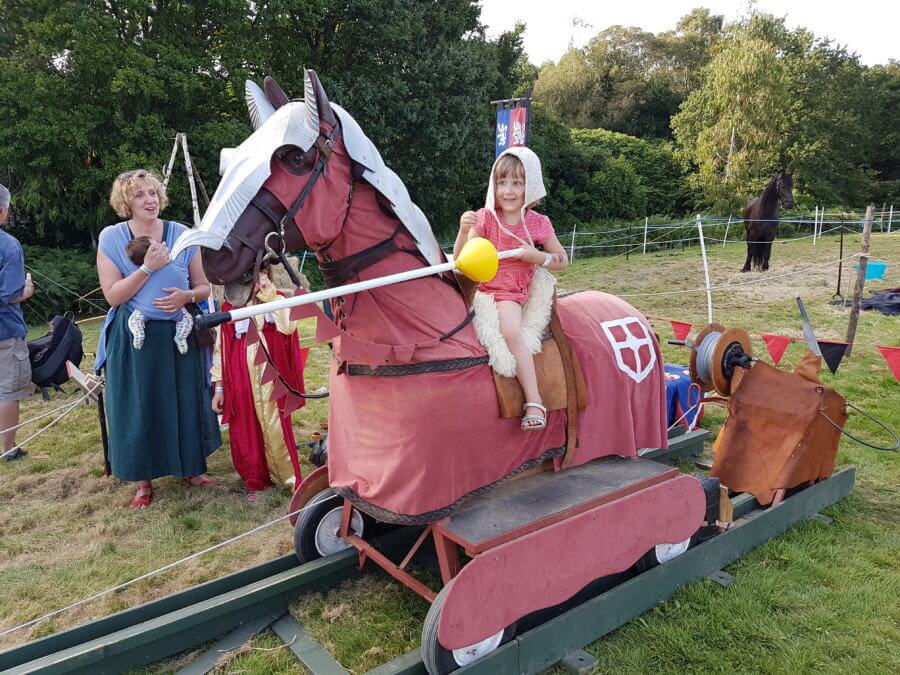 By day two we were ready to explore the rest of the site. The children’s area provided a welcome shady spot in the heat and the girls were delighted by the puppet shows and storytellers.

Like most festivals there were plenty of things the kids wanted to spend our money on but it wasn’t the usual loud flashy fairground rides and buckets of candy floss which always make my heart sink a little. I didn’t mind paying £3 for them to have a go at archery with mini longbows (Martha turns out to be worryingly good at that) or a couple of turns on “Henry” the mechanical jousting horse. Besides, there was so much free entertainment to balance out the paid for stuff, that nagging could be easily deflected.

On a couple of mornings we took shelter from the heat in the Robin Hood Woods where Helen and Penny, the wonderful forest school team, provided a never ending array of activities from painting with colours made from berries and charcoal to whittling daggers and spears, cunningly using potato peelers so it was safe for even quite little children. 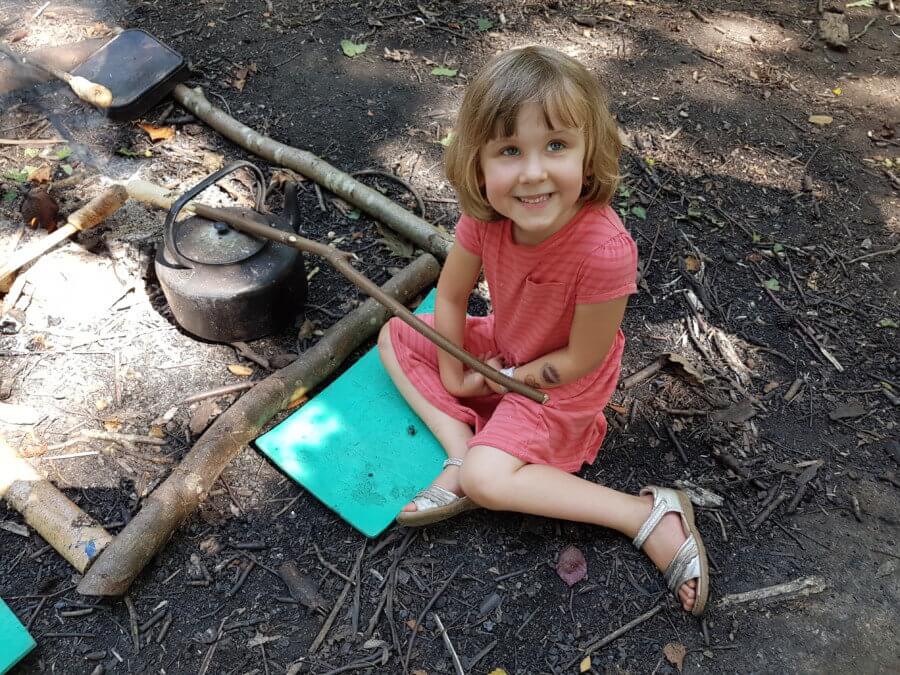 This review would get very long if I listed everything on offer but let’s just say we were never bored.

After the day guests had left, there was a little break, perfect for heading back to the tent for a bit of a rest and some warmer clothes then the drums struck up at the top of the campsite and led everyone in a torchlit parade back to the castle for the fire show and the return of the Knights of Camalot, this time with flaming lances.

The Saturday night show was the main celebration for the 25 years and featured some spectacular stunts from the knights and their horses and a fireworks display that we enjoyed from our tent. The girls also loved the outdoor cinema which showed medieval themed kids films each night. 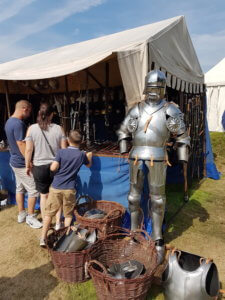 The fact that this festival has been going for 25 years can be seen in the organisation. There were lots of things I’d love to see at all family festivals. There were large tents with benches and tables near the food stalls so we could sit and eat in relative comfort and protected from whatever the British weather happened to be chucking around at the time.

I never found a toilet queue more than two people long despite the event attracting around 30,000 people over the weekend and they were almost always clean, never far away and had plenty of loo roll and usually a proper sink to wash your hands.

The main sets of toilets also had a disabled loo although I did meet one lady who was struggling a little with a standard toilet in one of the smaller areas.

Sadly we didn’t get there quick enough to book a seat at the medieval banquet but we found plenty to like at the other stalls, a lot of this could be summarised as meat in bread so vegetarians may have found the choice a little limited. The BBQ pork felt vaguely English medieval, the paella perhaps less so, but it was very nice. The Smoothie van provided some welcome cold vitamins. Meals were around £7-£9.

At one point I made the mistake of giving my husband directions to “the thing opposite the mead stall” a mistake as it turns out there were at least three of them. There were also several bars serving some pretty nice beer and cider, the main one being the Buxom Wench tent which also provided food and entertainment opposite the castle entrance. 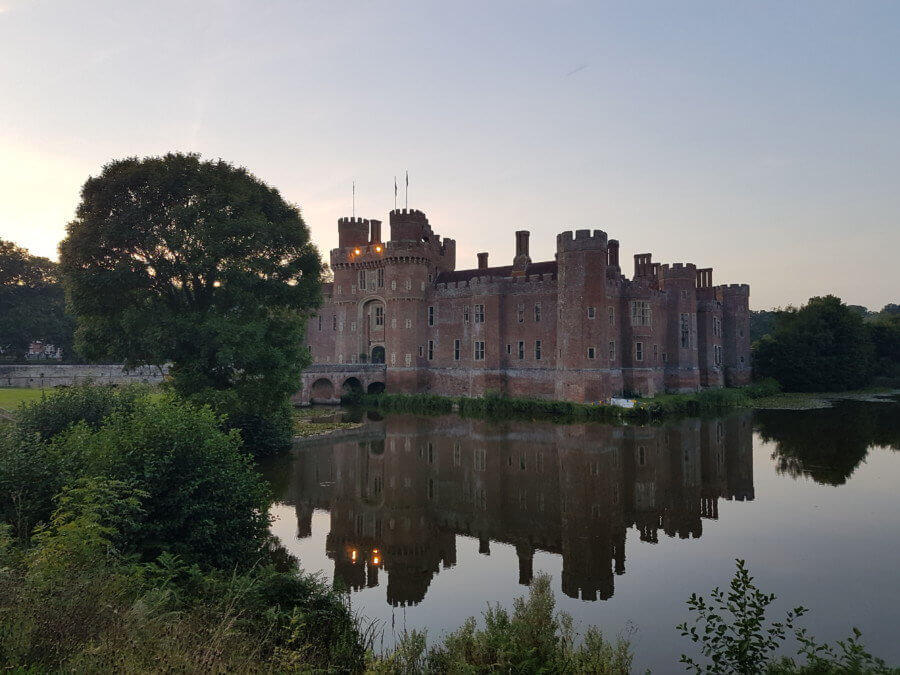 Chatting to our neighbors in the camp site it seemed they had all come the year before, had a great time, and were delighted to be back again. I’d say that’s a pretty good recommendation. It may not have the big name bands of other festivals, but with small children and busy lives what I really want from a festival is the chance to escape for a bit, experience something new and, if I’m honest, with the final days of the school summer holidays approaching, have other people think of things that will entertain the kids.

England’s Medieval Festival laid all of that out before us like a fine Medieval Banquet and there was lots of dressing up too. We had a great time.

Read more about England’s Medieval Festival on our factsheet here.