With a new baby in the family we wanted our first festival this year to be fairly small and very easy. Lakefest certainly fitted the bill and, although it lacked some of the little extras that I’ve come to love about family festivals, everyone had a good time. The kids were wowed by BMX riders, the grown ups saw some old favourite bands and the ducks had a great time too.

For a fairly small festival, Lakefest draws a good and varied music lineup. On Saturday night we lay on the grass under the setting sun with a cool pint of cider and listened to Aswad play a great set of chilled out reggae hits and covers. The band seemed to be enjoying it as much as the crowd.

Unfortunately, with all the stages in tents, the price for being able to spread out on the grass was watching the band on a big screen while trying to ignore the noise from the other stages and the fairground rides.

But with so much rain this year and such a compact site, the tents do make sense and we were glad of them on Sunday afternoon, when everyone was a bit tired/hot/cold. We found a patch among what was left of the hay bales and relaxed for a bit to Badly Drawn Boy.

The older girls had a much needed nap and somehow slept on right through a lively set from “Folk Royalty” Seth Lakeman. Baby Ada and I had a good dance though and despite being in a tent there was plenty of space with a raised viewing area to one side for wheelchair users. Other headline acts included Feeder, Imelda May and The Charlatans.

Beyond the main tent there were four other stages. It was hard to miss what was going on in the Secret Ibiza tent, there was nothing very secret about the pounding late night drum and bass DJ. It sounding like everyone was having almost as big a party as the ducks (I’ll come back to the ducks). But I think we might have missed out on some of the lesser known live acts.

I love discovering new bands at festivals, but the only program option was a £5 lanyard with a basic map and a list of the acts so it didn’t seem worth the effort of shifting three kids and all our clobber around the site in the hope we might find something we like, based only on it’s name.

Aside from the music, the BMX shows were the real highlight, especially the gasp inducing high jump competition on Saturday night. Full marks to the MC who kept up a relentlessly enthusiastic commentary for two shows a day. 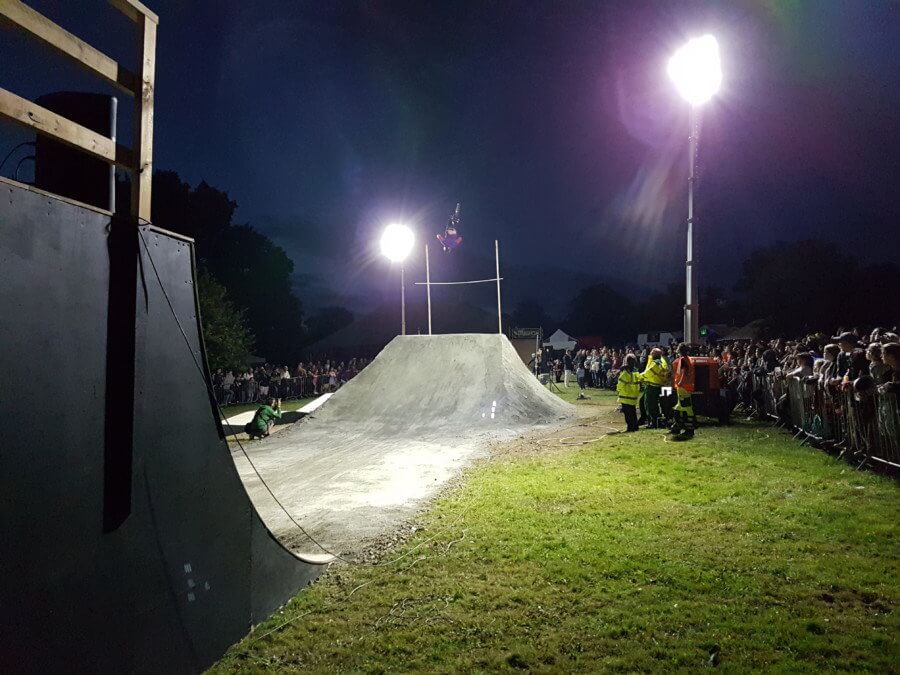 I gave a little internal groan when I first entered the main arena. There seemed to be half a fairground, noise and lights blaring right next to the main stage, with a Ferris wheel on the other side of the site (which was centered around the shops). So you were always in full view of something to spend money on.

For me, one of the great things about taking kids to festivals is that, once you are there and all set up, life is easy. When there is lots of kids entertainment I have a rare opportunity to turn my Mum brain down a little and relax. I don’t want to continually hand out money to do that, or worse, continually say no.

But by the end of Friday we’d heard the dreaded phrase “I’m bored” and were wondering how best to get through the rest of the weekend without going bankrupt. Thankfully on Saturday we began to discover that there were free things for the kids to do, we just hadn’t found them, again the lack of a proper program wasn’t helping here.

Tucked away between the stalls and the fairground was a tent with various activities listed on a blackboard, along with a few outdoor toys. Next to it the circus skills area was a favorite as were the juggling shows, which again we only found out about from the blackboards. There was also a slack lining area and a few craft stalls (for a fee) The kite making (£4) seemed to be the most popular. By Sunday there was a small flock of them floating cheerfully in the sky.

If all else failed, there was always the time honoured game of destroying the hay bales to build mountains and nests. Thankfully the bored phrase never re-emerged! 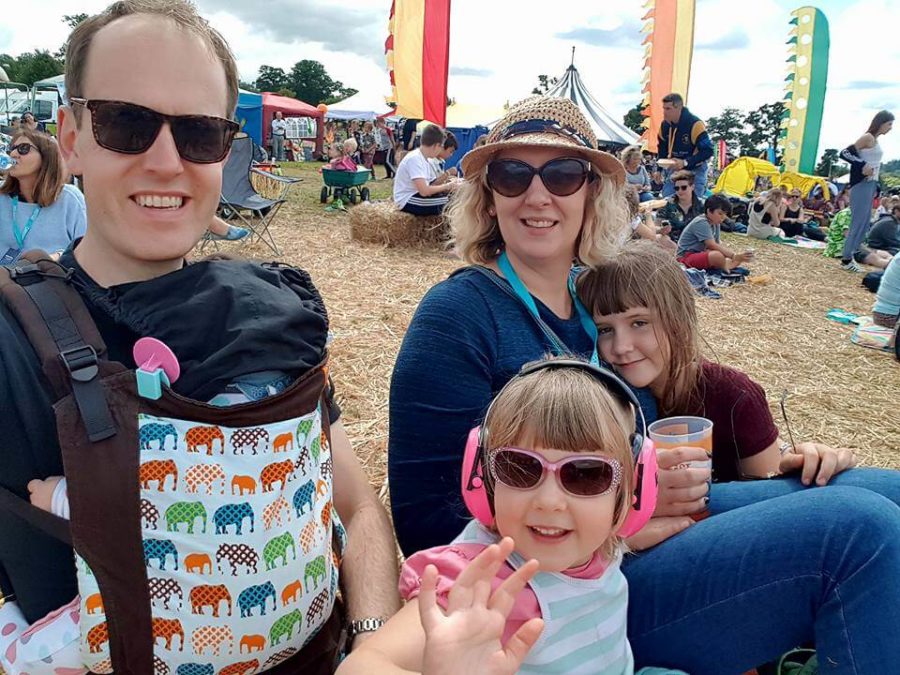 Outside the arena, our older girls’ favourite activity was making friends in the camp site.

With a baby who refuses to sleep in a buggy (and no room for one in the car anyway) I wasn’t looking forward to lugging all our stuff from car to campsite, carrying the little one, and trying to keep an eye on the mobile children. So we opted for reserved camping.

This did cost extra but meant we could park up right next to our tent and also be sure we’d have a space big enough (it’s a huge tent). The girls soon found some others of a similar age and had plenty of space to run about, although we did have to keep an eye on them near the duck ponds which looked quite deep.

At least the Ducks were behaving themselves at that point. Neighbours who had arrived the night before warned us of their late night antics… 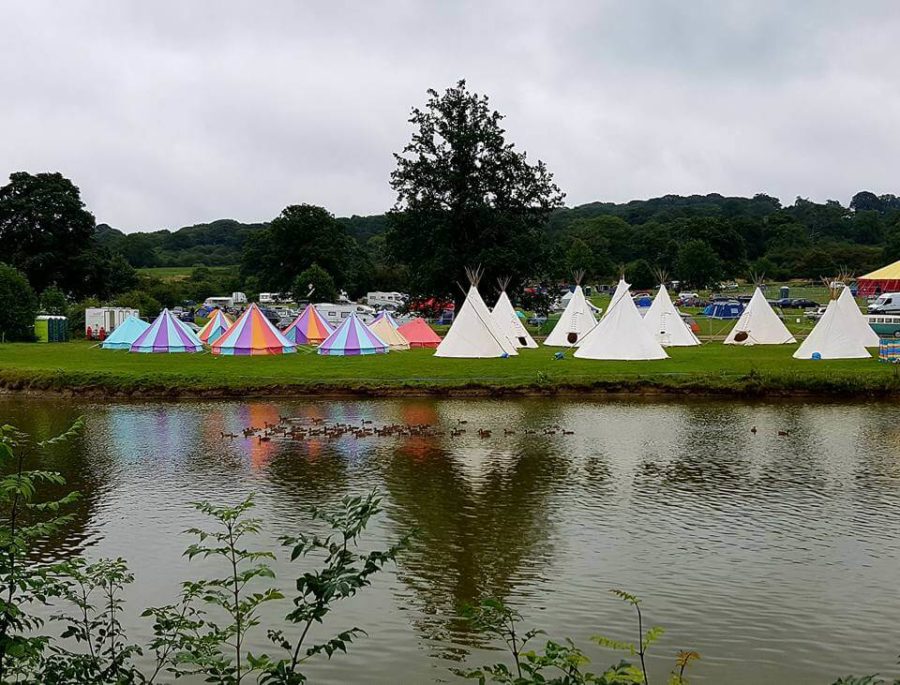 But back to the human camping, On arrival there were plenty of friendly stewards to help us find our marked out spot but the “extensive” toilets and showers promised by the website turned out not to be very extensive at all. There was almost always a queue for the loo, often this was 20+ people long.

They were kept pretty clean but a few more would have made a big difference, especially with young children who don’t give you much notice. Proper hand washing facilities would also have been nice. I didn’t bother with the showers, there were only ten for all of the reserved camping and live in vehicle fields combined.

At our end of the site there was also a small glamping area with tepees and bell tents (with it’s own showers and toilets).

The accessible, general and family camping areas were on the other side of the arena. These were among the most spacious I’ve ever seen at a festival. There was a full sized game of rounders going on at one point and groups had spread out with gazebos, lights and wind breaks claiming their patch. I needn’t have worried about space for our tent and the setting was gorgeous, surrounded by green hills and topped off with a castle. 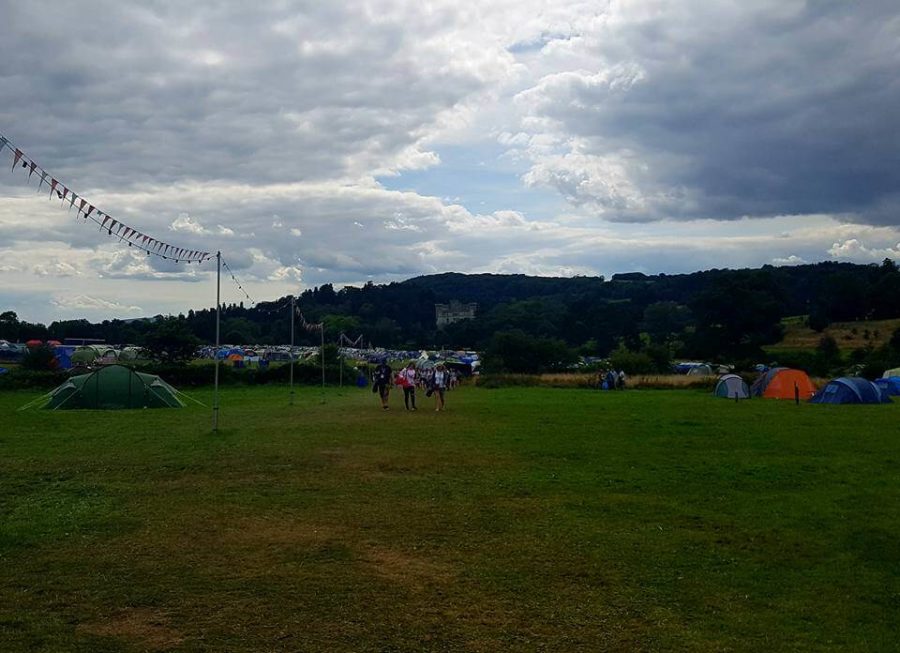 There was a reasonable range of food on offer, although only one of the stalls seemed to be offering a kids’ menu and quite a few of the options, especially the vegetarian meals, were spicy. This limited the choices for our currently rather picky four year old but she was happy with repeated trips to the pie and mash stand  (I’ll just have to feed her vegetables in between festivals).

It cost around £6 – £10 for a meal. Drinks were about £4.50 a pint plus the cost of a reusable cup, we also had some very nice cocktails for £6.50. There were plenty of bars and the queues were small apart from at the Pimms tent which did a roaring trade, especially in the brief moments of warm sunshine. 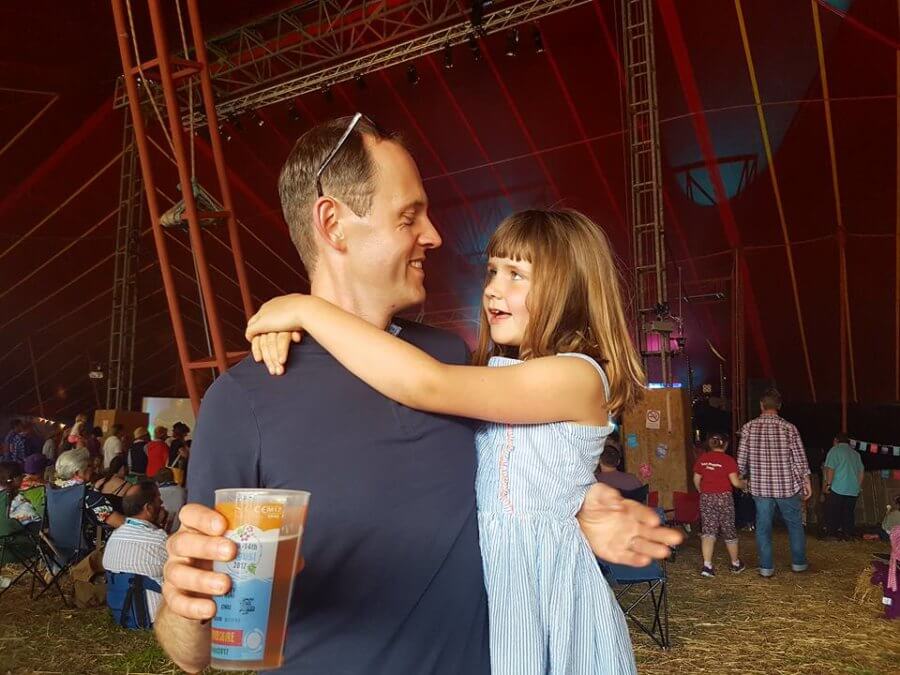 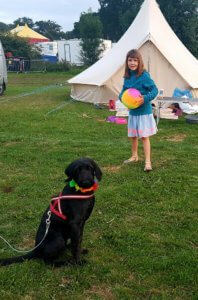 If I’ve made a few complaints here, that perhaps doesn’t do justice to the weekend. The negatives are relatively minor and come from comparison with other festivals. But Lakefest isn’t other festivals and overall we had a really good time. The kids had fun and made friends and the grown ups got hassle free camping and some old favourite bands.

It’s clearly a festival with a loyal following and has something to offer everyone with a range of music almost as wide as the age range of the guests. The biggest group was probably families with pre-school and primary age children but we saw plenty of teens, twenty somethings and much older adults too.

A lot of people had brought Dogs and these were universally well behaved and kept on leads. My girls were particularly delighted to meet a Chihuahua puppy with pink angel wings.

She wasn’t the only one dressed up either. This year’s theme was “Lakefest Goes Hawaiian” and lots of people turned up in grass skirts and flower garlands. Sadly that seemed to be about it as far as the theme went though. It would have been nice to see more of it in the decor and entertainment. For me, the site as a whole lacked the decoration and sense of theatre that I love at festivals. 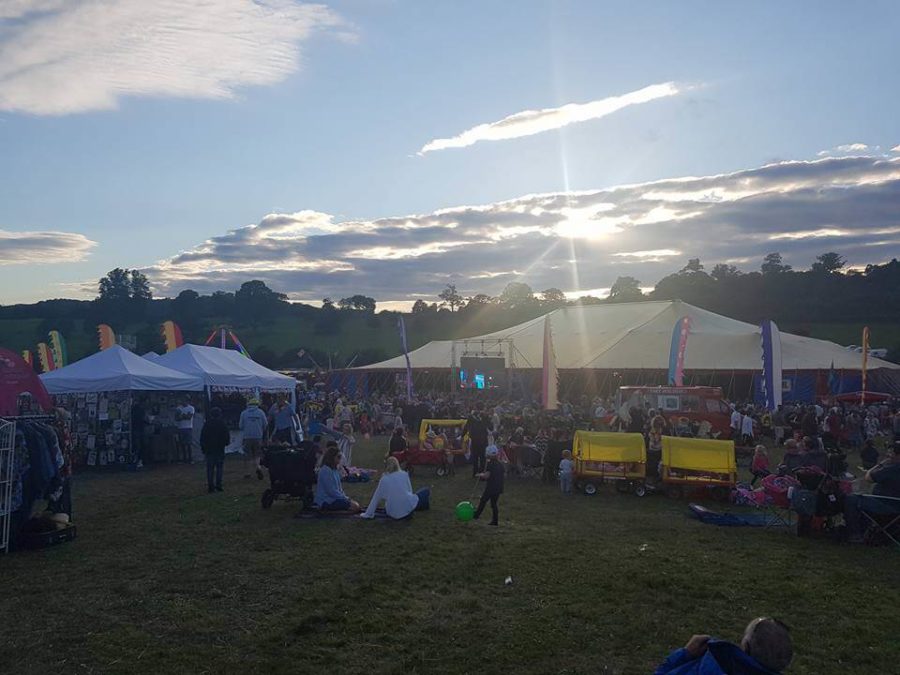 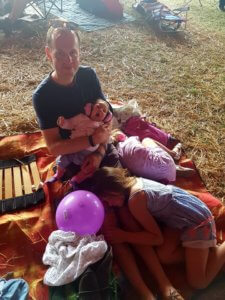 I’d say the best way to get the most out of Lakefest would be turn up as a group with kids of all ages and a fair bit of cash for the extras (the tickets are at least a bit cheaper than a lot of other festivals).

There is plenty to keep everyone happy with lots of room for the little ones to play and a fairly safe environment for older children to go off alone and get a taste of freedom. Adults can enjoy the bands of our younger days or, for those with more stamina than me at the moment, party until 2am then let the kids watch movies on the main stage screen in the morning while you recover.

Which brings me back to the rowdiest group at Lakefest, actually the only trouble makers I saw (or rather heard) all weekend. For my fellow alumni of reserved camping left, the biggest party animals came out at 4am each morning, when voices were raised louder than I thought possible and a tent shaking flypass took place.

However much effort you put in in the Ibiza tent, no one parties harder than a Lakefest duck. 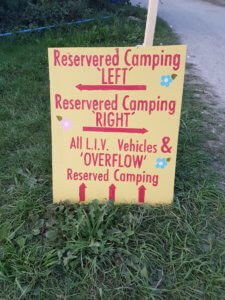