Our friends at LittleStuff.co.uk have kindly let us share this great review of Larmer Tree Festival 2010:

The Larmer Tree Festival Review – what we really thought

by Emma, on behalf of Littlestuff

When Laura asked on Wednesday if I wanted to take her place at the Larmer Tree Festival for five days she didn’t have to ask twice. I imagine she chose me because I had easy access to four enthusiastic children. What she might not have considered was my previous experience working at numerous festivals in the past, delighting children with a huge inflatable bouncy dragon, and more recently taking my own children to experience the fun for themselves. 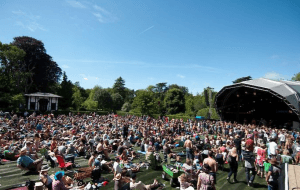 So it was that Rob and I found ourselves on Larmer’s main lawn that same evening watching Jools Holland, having roped Granny in for some impromptu babysitting (it was a school night after all). Jools did his best to dispel the rain showers but no one seemed to mind them. People were well prepared with raincoats and golfing umbrellas…. at times a bird’s eye view would have revealed a giant sea turtle of colourful umbrellas. With his Rhythm ‘n Blues Orchestra and impressive guests, Jools gave a wonderful show, and after a raucous encore we joined the flow of the crowd to take in the beginning of Newton Faulkner’s mesmerising set in the Arc marquee  before reluctantly heading home to return the next evening.

Danny was my companion for Thursday evening, my relaxed eleven year old who, having been to Glastonbury a few times, wanted to try something different. We started off with a circuit of the site and he was heartened by the manageable size and how quickly he got his bearings. We sampled three bands, one crêpe and an ice cream, and I could sense Danny’s excitement at the prospect of coming back on Friday to enjoy as much as we could pack in to the weekend. I honestly haven’t heard him talk so positively about a family weekend away.

Friday afternoon saw our return, with Rohan (14), and our huge tent. Not the ideal tent to take for two nights’ stay so I was glad of a teenager to help me lug our car-full to the large open space we found a few hundred metres from the car. There were carts available for this “lugging” but they were located some distance from the parking and involved hefty deposits and hire charges. Surely at a small and friendly festival such as this the carts could be used as needed and returned to locations dotted along the length of the parking.

With beds made we headed up to the Village to choose some tea. There’s so much wholesome, well-made and interesting food on offer at reasonable prices that this wasn’t difficult. Rohan chose a perfect cheese burger, Danny had a mushroom pizza made to order and I had pie mash peas and gravy, washed down with an ale from the bar. All delicious! Now I’m no connoisseur of such things but the selection of beers and ciders seemed as well-chosen as the food outlets. 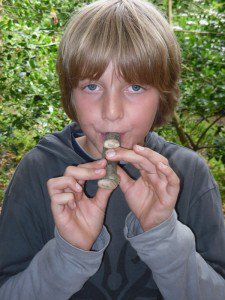 Replete, we joined the crowd of people in the sunshine of the main lawn. This really is a beautiful lawn, framed by masterly mature trees which are colourfully up-lit as darkness falls, creating an awesome setting where whole families were gathered together with the party-goers. DJ Derek was playing from the smaller garden stage and this was the highlight of the weekend for Rohan. Yes he enjoyed the reggae, ska and rock steady blend but the dichotomy provided by this man’s appearance, born in the 1940s, wearing shirt and waistcoat, dancing and speaking with a Jamaican lilt, had him transfixed.

Standing in the crowd later, dancing to Toots and the Maytals with my lovely boys, summed up the atmosphere of the festival for me. In front was a large group with children on shoulders and snuggling in blankets on camping chairs. When revellers stumbled forward to get to the front they were easy to divert to a different route when I pointed out the smalls. Everyone was so considerate and friendly. Toots set was summer bliss and rounded off with a fifteen minute encore, involving dozens of the audience being welcomed up on stage to dance with the band. Truly a night to remember!

A popular new dimension to the festival this year was the comedy sessions in the ARC. Rohan was keen to see Russell Howard so this is where we went next. We laughed our way through the compère’s and Steve Hall’s “adult humour” as Danny called it, but we just couldn’t cram in comfortably enough to stay for Russell. 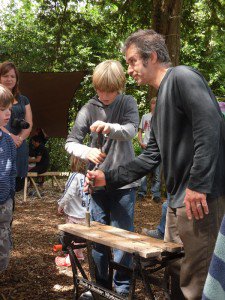 Saturday was our first “doing” day. We arrived early at the Woodland crafts area, nestled under trees and beautiful wooden and rush sculptures, where adults and children could watch demonstrations and make crafts of their own. We watched the making of a whistle carved from a length of green wood using hand tools.

Children queued patiently for their turn to make their own and Danny came away with a fully functioning treasured whistle, after an hour and a half wait. The clear guidance and calm assistance given by the man running the workshop as well as the exemplary behaviour of those watching and waiting, made this as pleasant a wait as possible, and I’m sure that they will be better prepared for the demand next year. We knew we would be back to try our hands at some rush crafts and wooden mobiles Danny had spotted, but for now we had some hoola hooping to try. 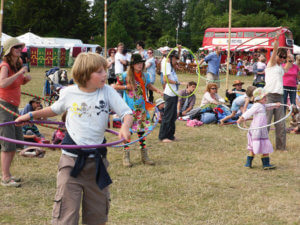 Later in the day the other half of our troupe arrived in the form of Rob and his twin ten year old girls who were keen to attend their first festival. A tractor ride transported their camping essentials virtually to our tent door; then we showed them around the site and ate another delicious selection of meals, before absorbing the excited atmosphere of the main lawn with a brilliant performance by the French band Babylon Circus.

On Sunday morning we ventured up to the Larmer Parler marquee. Organisation was slick as we were greeted at the entrance by helpful ladies with clipboards who described the activities on offer and found free spaces or gave us an idea of waiting times. 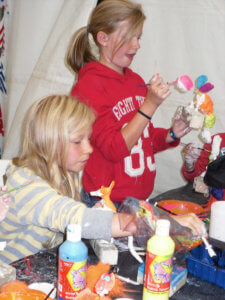 They added Emily’s and Laura’s names to the list to join the Modroc workshop and ten minutes later they were happily modelling dragonfly and kangaroo from wire, newspaper and masking tape, then covering them in plaster of Paris bandage before a final lick of paint. The operation was very impressive: three different tables for the various stages of production with crafts people helping and advising with such enthusiasm you would have thought that it was their first make too.

At no point did the girls feel pressure to move on and they came away with accomplished models to be proud of. Other workshops in the marquee looked similarly proficient and inspiring. Children could try their hand at making jewellery, hats, ornate lavender bags, tie dye T-shirts and bunting.

Meanwhile back at the Woodland crafts area Danny had finally got to the front of the queue to make a greenwood mobile, involving the use of intriguing bench horses and tools. 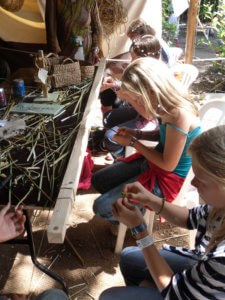 This was Danny’s fourth attempt at lengthy queuing for this activity so a big relief when he wasn’t turned away holding back tears. And it was worth the wait as he learnt to use some impressively sharp tools.

We all made some simple but gorgeous bracelets and dragonflies at Rushworks which I found so satisfying I’m determined to get the materials and do some at home. Finally Laura and Emily learnt to make woollen friendship bracelets in the craft yurt with the patient whistle-making man, before having to head home.
Larmer Tree really is unique. Its setting, with landscaped gardens and wandering peacocks, gives it a feel of sophistication. We stumbled upon secluded areas beautifully decorated with fairy lights and crafts. People are friendly and take the time to strike up conversations so you find out about what they’ve been up to and can recommend.

Camping is civilised with ample grassy fields and excellent flushing loos with decent showers, if you’re prepared to queue. Music may not include top names but has the essentials of a top festival, with tight musicianship that gets the crowds dancing. Above all the workshops are brilliant. Ambitious, and perfectly planned, they enable everyone to make fabulous memories to take away.

Since our return home I’ve been browsing through the programme, noting all the things we couldn’t fit in this year. The literary performances in the Lostwood appeal as do all the adult workshops, and one of the many holistic treatments available certainly wouldn’t go amiss to ease muscles weary from camping. Rohan should definitely check out the teens youth zone and next time I’ll go prepared for the dress-up days! It may not be the cheapest festival to take the family to, but many see it as an annual holiday which really has so much to offer to every member of the family.