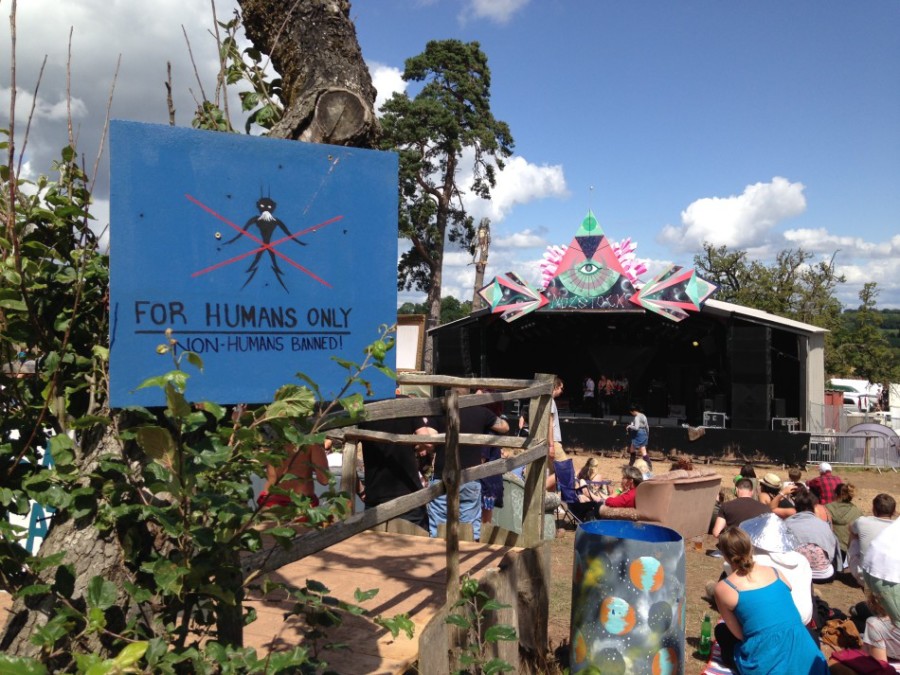 Myself and my family (husband and two sons, 6 and 4) went to our first Nozstock this year and despite heavy rain on occasion, we had a brilliant time! The festival is set in the beautiful rolling hills of Bromyard, Herefordshire and is a really magical place to visit. Compared to some, Nozstock may be a fairly small festival with an attendance of about 5,000, but there is such a large variety of entertainment on offer. There are 9 stages offering a large variety of music, comedy, theatre, dance, film and endless activities for children of all ages.

The festival is well signposted and admission onto the site was quick and efficient, with plenty of marshals about for assistance. There is a short walk (less than 10 mins) from the car park to the family camping area and when we arrived on the Saturday morning it was busy but we still managed to find a decent spot for our tent. Out tent was just a minute’s walk from the toilets, and 3 minutes from the showers which were all regularly serviced. Even by Sunday they were still in pretty decent condition. The portable toilets around the site only offered hand gel and not running water for handwashing which I was did find disappointing. 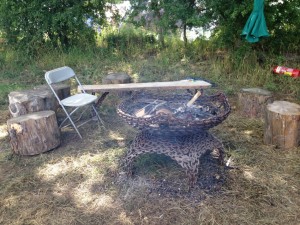 The family camping area also included a large communal fire pit for cooking/toasting food in and lots of benches which was a nice touch.

There were a few water taps around and sinks for washing up as well. The weekend saw a lot of heavy rainfall, and in order to keep the site from becoming a mud-bath woodchip was regularly laid down in the main walkways which really helped.

The family camping area is just a 5 minute walk away from the main festival and the Bandstand stage, and you can hear the music clearly when it is playing. At night time, you can hear drum and bass until the very early hours. My children slept through this though and so did I with the help of some earplugs. It wasn’t really loud but you could just about make out what the MC’s were saying! 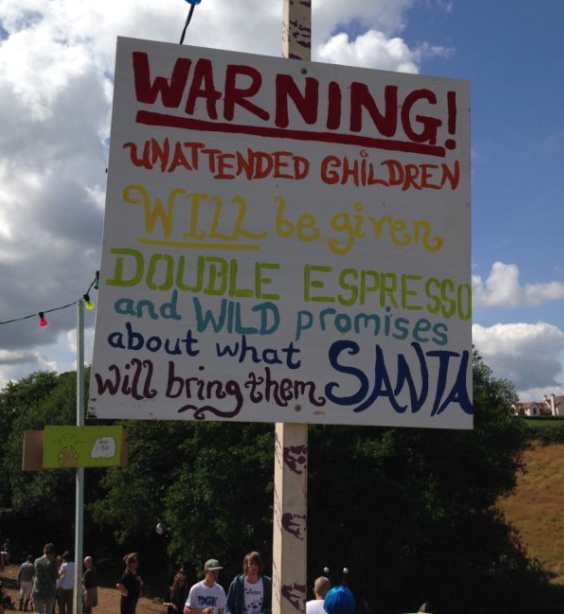 At Nozstock there is a specially created area just for children know as The Dingle which was simply fantastic. Over the course of the weekend my boys partook in space rocket building and painting, music making, story time, dressing up, costume designing, Lego building, a mud pie kitchen and so much more besides! The children’s area was always buzzing with families so while your children are having fun there are always others about to chat to. A good deal of this is under cover too – handy for when the heavens opened (and open they did for most of Sunday morning!) 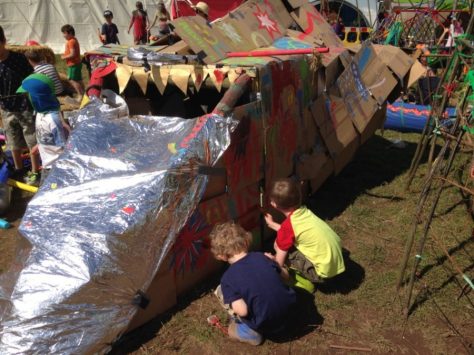 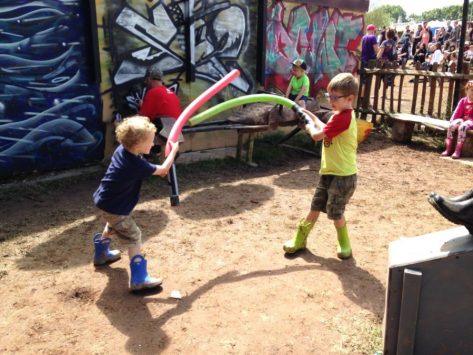 Available all weekend was a geodesic climbing frame and vintage swing boats as well as a huge amount of toys, books and games available anytime in the large undercover play tent. 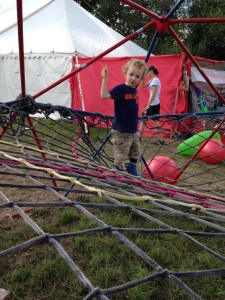 Some of the highlights of the scheduled activities were a juggling workshop, hula hooping, an animation workshop (they offered to email you your child’s own creation), jewellery making and painting, creating an edible garden, a puppet theatre and musical instrument making. 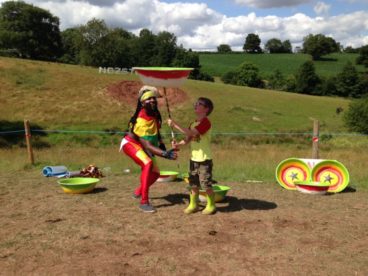 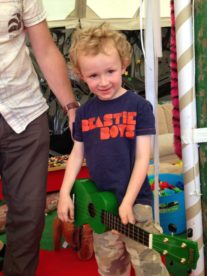 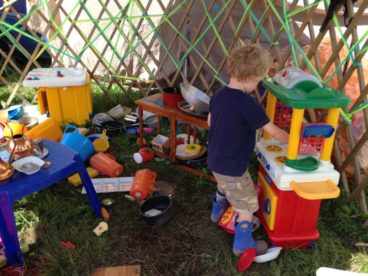 In terms of child safety, there is a Lost Kid’s area in the Dingle where they will add your mobile number to your child’s wrist band. They also offer bottle warming and baby changing facilities there.  Between the campsite and the main festival site was a security check which you needed to pass through each time you went from one to another. We got the impression that security and safety were taken very seriously at Nozstock.

We found that Nozstock felt very safe and relaxed, even after dark. The festival site once dark is illuminated with floodlights, fairy lights and no shortage of glow sticks! Although we were back at our tent just after 11 some friends of ours who also went to the festival went to the drum and bass tent and stayed until 1am along with their 11 year old with no issues to report at all. 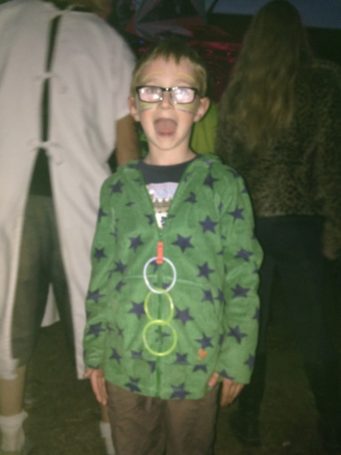 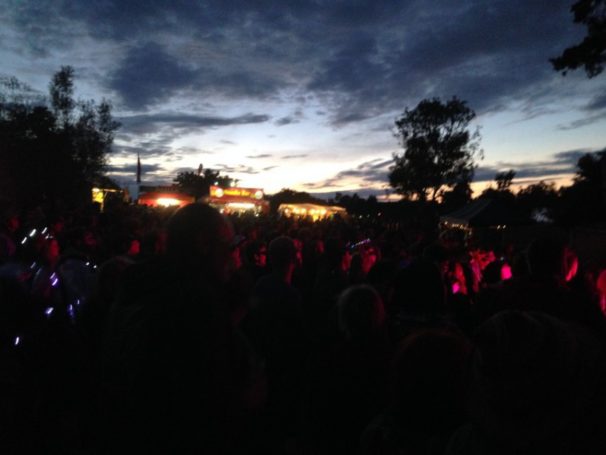 There was a large variety of food and drink on offer day and night and most of it was quite reasonably priced as well. As a vegetarian family we were really glad to find that there was a good selection of food for us, ranging from chili to pizza to a good old veggie fry up!

We were charged £1 for a cup of hot chocolate, £3 for a veggie breakfast bap, and £9 for a large, freshly cooked (in a wood-fired oven) pizza which were all very reasonable and really tasty. There were also plenty of stalls selling ice cream and sweets.

Nozstock really does have something for all tastes and you can find everything from pop, rock, ska, electric swing, folk, funk, soul, indie, drum and bass, psytrance, house and more. You can also immerse yourself in the arts and enjoy stand-up comedy, poetry, workshops and a cinema.

As a family we danced along to acts from the main stage (Orchard stage) including Molotov Jukebox and Electric Swing Circus and saw a lot of excellent up and coming talent at the Bandstand such as Pink Cigar and Another Band. We danced to the psytrance in the Coppice and bopped along at Swing Theory. The boys’ had a brilliant time jumping about, dancing and playing air guitar and were thoroughly entertained by all the music on offer (as were we!) 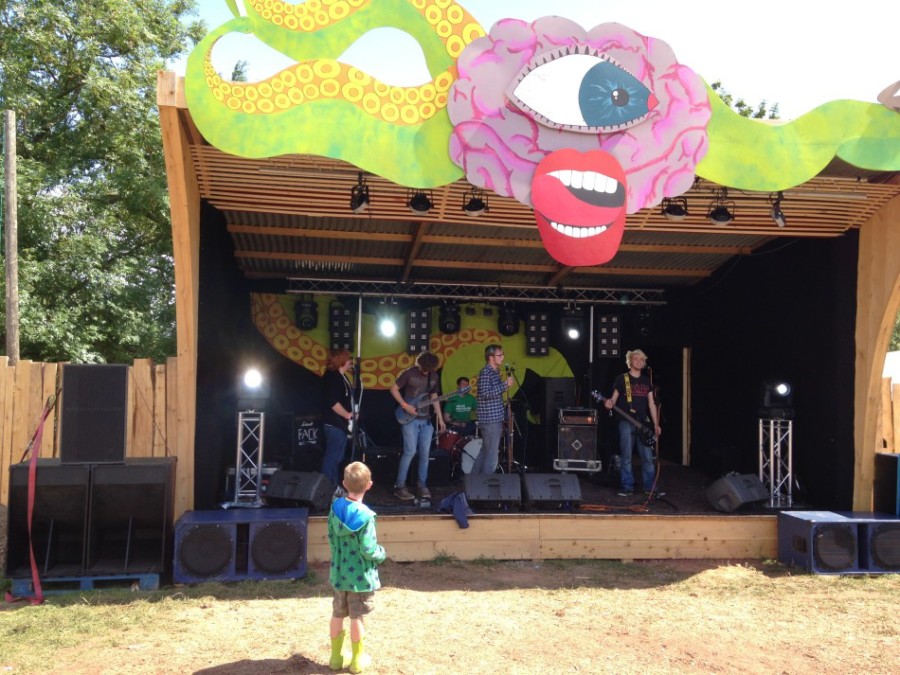 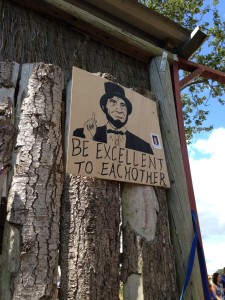 Nozstock prides itself on being a green festival and it’s not hard to see why. The site is kept very clean and tidy by the many volunteers who do an amazing job at keeping litter at bay.

Recycling is encouraged and different bags for recycling and waste are provided at the campsites for you to use. Around the festival site itself there are no shortage of recycling bins for cans, plastics, paper and card which all help to keep the environmental cost of the festival to a minimum.

This is a real gem of a festival and so family friendly; we will most definitely be back. There is so much to entertain all of the family in terms of music, arts and kids entertainment in what is a beautiful, clean, and safe environment. One of the biggest pluses for those attending with small children is that due to the small size of the festival, there are no long walks to reach any part of it, excellent for small, tired legs (and larger tired backs from one-too-many piggy-back rides!) 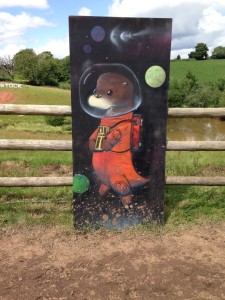 One thought on “Nozstock 2015 Review”