Something small but beautiful happened in the National Forest, Staffordshire in July 2018. A brand new festival was born. Timber Festival is a celebration of nature, our relationship with the forest, a chance for children and adults to be free, to play, relax and be inspired.

The first thing that struck me about Timber Festival was how relaxed it was. No huge queues for the wristband exchange, a short walk from the camping area to the festival arena, friendly security. As I get older this is becoming increasingly important, they had hot showers with no queue and drumroll….some flushing toilets with sinks which were immaculately clean.

The site is beautifully maintained. I saw no litter and there were recycling bins everywhere. As the festival prides itself on its sustainability, there were reusable cups available for a small deposit, recyclable plates at the foot stalls and the programme was available as either a digital download or on recycled paper.

There was one child’s amusement ride which was a beautiful, hand carved, bicycle powered merry go round. In fact the kids built their own playground in the forest canopy using hammers and nails.

We walked into the main site past two beautiful flocks of carved flying birds and down the hill into the main area. Everything is within a 10 minute walk, from the main food area on The Common, to the wooded area called The Canopy, to the main stage which was the Nightingale Stage and at the end was an area with a farmer’s market, a maze within the coppice and a board game tent. My son and I spent a happy hour in there learning how to play new board games – watch out he is a demon Ninja Paw player now. We then watched an acrobatic demonstration where performers danced suspended by silks in the trees.

We sat in the sun and watched a band called This is the Kit. This is one of my favourite bands this summer and to be able to sit on the grass and watch them just 10 feet away was so lovely. The majority of the audience were relaxing on the grass and at one point the band asked the children to stand up and do the floss to their next tune. My son duly obliged by flossing as fast as he could and received a cheer from the band as well as the crowd.

There was a flat area in front of the stage and then a hill behind this, which was perfect for rolling down, cartwheels and watching the sunset. The lead singer commented on how lovely it was to be able to look out from the stage and watch the children playing on the hill. As there were no crowds there was plenty of space to run around and be free. Another thing I noticed was the beautiful construction of the stage itself, which appeared to hand carved out of wood, with perfect joints. Even though the festival was small, everything was high quality and constructed with love and care.

After the band ended we walked into the woods, where we saw the most incredible piece of art called The Museum of the Moon suspended in the trees. Strangely it seemed right at home there and there were lots of children playing underneath the moon and looking at the detailed surface, which was taken from NASA photographs.

We then walked down to the Woodland disco. My son relaxed in a sky pod suspended from the trees- accessible by rope ladder and too small for adults while we had a dance to funk, soul and hip hop classics. We then walked back to the main stage and started chatting to a very friendly man who we found out was the laughing yoga instructor. He told us that when he was a teenager he was a break dancer and started teaching my son to dance on the grass.

On Saturday we all started the day with a hot shower and wandered back into the festival site. We explored the areas at the top of the festival site, including the Idlewood field which featured craft stalls, artists, a Greenpeace tent and a yoga area. This is where you access the bathing under the sky area-  wooden hot tubs which were arranged at the crest of a hill to capture the stunning view of the forest. The hot tubs didn’t seem to be busy. I’m not sure if this was because the price was too high (£30 for a two hour session) or because children are not allowed. Anyway it looked like a very relaxing treat for the lucky people who were enjoying them. We also spotted a mermaid and unicorn tent which was run by two very beautiful women who were dressed as mermaids. Just magical for the little children, who sat on cushions in the shade having their faces painted with glitter.

Then we retreated from the sun into the woodland canopy, where we took part in a beat boxing workshop with Jason Singh. Jason inspired the audience to be inspired by the natural world around them, the wind blowing in the trees, bird song, a baby crying to create new sounds which were then made into pieces of music using a loop pedal. Jason also brought along his own children who participated by making incredible sounds into the microphone. We had a turn at slacklining in the forest, watching children build their own forest playground using hammers and nails before watching a piece of interactive theatre called “Seek, Find, Speak”. This was based upon Robert MacFarlane and Jackie Morris’s book “The Lost Words” which reintroduces children back to words about the natural world which are frequently not used by children…otter, raven, bramble, willow, dandelion. This delightful performance took us into the forest, out into the fields of wild flowers and beside a stream. The children chased the performers in delight and loved looking at the words suspended in the trees, touching the objects and reading poems from the book. 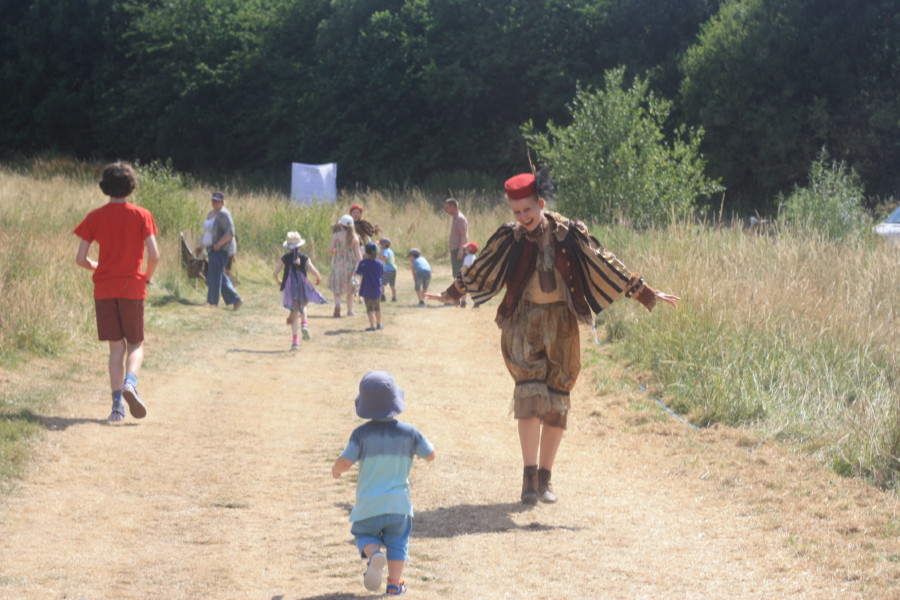 We were able to sit in the tent and listen to Robert MacFarlane do his own version of Desert Island Discs and discuss his inspiration before watching the football match. What an atmosphere to watch England win with a crowd of several hundred children and adults dancing for joy!

There were a few nail biting moments when the projector overheated and we lost the image, but the Timber staff worked their socks off to get things right for the crowd. This was responded to with big cheers and clapping.

Once we had recovered from the excitement of the football we took part in the most incredible workshop run by Polarbear, a respected spoken word artist and author from Birmingham. Within minutes he had adults and children developing their own characters within their own worlds, which he turned into stories with effortless ease.

Some of the characters were so believable the audience thought they should meet up and go on a date. The workshop ended with a teenager standing on stage and reciting rap he had written that weekend about nature. It was inspiring to see a shy looking teenager getting on stage and speaking so eloquently about an issue he was obviously passionate about.

After eating we went and sat on the hill and watched the sunset to the sounds of Jane Weaver. Then we ended our day sitting around the campfire,listening to spine-tingling stories by Ian Douglas. The stories alternated with a campfire band, daft magic and silly games to win chocolate prizes.

On Sunday my teenage daughter arrived with her friend. I wasn’t sure what she would make of it as Timber was a lot smaller and quieter than other festivals we have been to. However they both loved it, especially the art work, relaxing in the hammocks, exploring the maze and taking part in the workshops. The girls went to a workshop run by artist Jane Bevan who creates art out of natural materials. The girls were able to use a range of tools to make a necklace for £3 each which was very reasonable. Watching the girls confidently picking up tools and carving holes in objects was really enjoyable to watch. We played board games (some trickier ones this time as well as Ninja Paw), discovered a Nordic singer called Siv Jacobsen who the girls liked so much we watched her again on the main stage, watched Seek Find Speak again and then back to the campfire for stories, games and listening to the choir before watching another glorious sunset from the top of the hill.

Timber had a great selection of food on the main common area. A large tent was provided with tables, chairs and highchairs which was a nice touch and provided welcome shade. There were plenty of options for children including pizza (£7 for a margarita which was big enough to share), kids hot dogs (£3), classic burger (£5) vegetarian options such as the Cheesey Vinyl kids meal which was served up on a record (wotsits, dairylea, crackers, cheese and a string yoghurt for £3.50)and vegan options. There were sweet treats too including the flat doughnut stall which was very popular with the kids, ice cream made of sheep’s milk for £2 and iced coffee for the teenagers for £4.50. There was also a selection of food at the Farmer’s market at the other end of the festival.

Real ale, cider and fruit juices were available in the main tent (£4-£5 a pint) and there was also a gin and prosecco bar next to the main stage (£5 for a glass of prosecco).

Babies and toddlers had their own feeding and changing areas and I saw many mothers who were breastfeeding whilst watching the bands. A sling library was available as well as free biodegradable nappies. There was a lost child tent, although I thought it might have been better to have this in the main area rather than at the top of the hill. I saw several very happy toddlers riding on the bicycle powered merry go round, shaking hands with the woodland animals who walked around the site. Because there is no loud music or crowds I thought this was an ideal festival for younger children. The site was also quiet at night so everyone has a chance of a good night’s sleep. I saw one little baby splashing around in the sinks having a great old time! 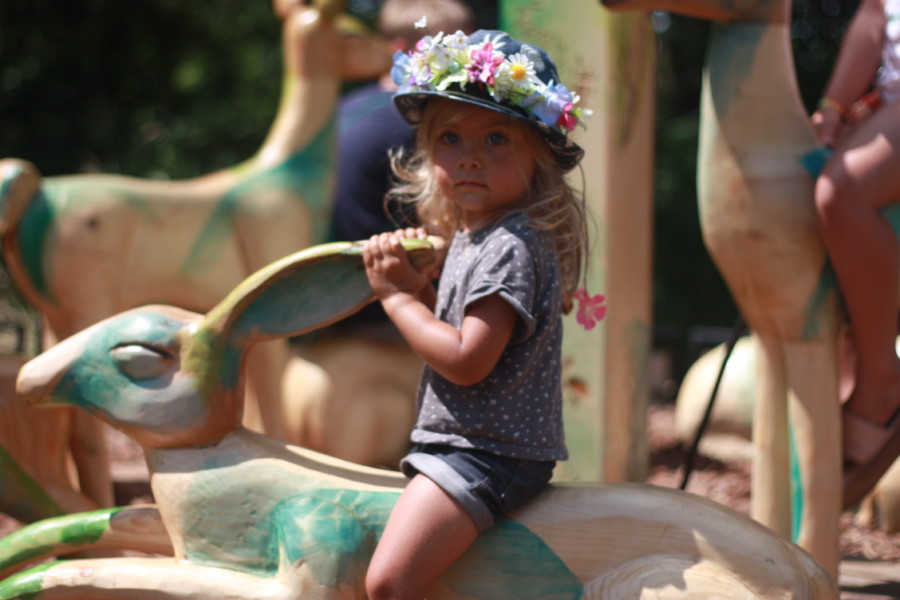 There are some small hills on site but I did see some wheelchair users. There were disabled toilets available and a large shower which could be accessed easily.

To conclude, Timber is a very different kind of festival experience. If you are looking for big name bands and lots of moshing then this place is not for you. However if you are looking for relaxation, refreshment, connecting to nature, chilled out vibes and a family friendly experience then I would thoroughly recommend it. My kids are already asking if we can go back next year.

More news about 2019 dates and details of early bird tickets will be available at www.timberfestival.org.uk