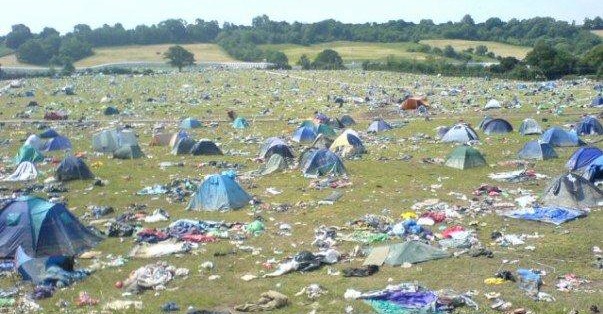 Last year, in the pouring rain and gale force winds, I spent several hours at a festival packing discarded tents. All the camping gear (tents, chairs, sleeping bags, roll mats, and water carriers) was destined for local scout groups. It had all been abandoned. Left just as the festival punters had used it, tents up, beds made, chairs in little circles.  We packed it all up and loaded up our trailers.

Whatever has changed, it has to be a change for the better.

A new lease of life

The thousands of pounds worth of equipment left after festivals is perfectly serviceable. Given a good clean, it can last for years. Charities, school groups, youth clubs and other organisations will all take the stuff off my hands. Some even offering to come along and help with the clean up.

So the question is: do you take everything home with you?

I have to own up to leaving a broken tent in a bin at Glastonbury once. And to giving all my food to a hungry looking steward, but that’s all….

Do you drum it into your children that we should tidy up as we go? or is it OK to leave things behind? I’d love to know when in a child’s development the ‘ethics’ switch goes on… if ever!!