Reviewed by Lisa Morris and family

Every small festival calls itself “friendly” but with Beverley Folk Festival they don’t have to apply that label to themselves. Before you even pull off the road to Beverly Racecourse, where the festival is held, you are greeted by the friendliest stewards imaginable. We must have stopped for a quick chat three times on the way to our campsite parking space. The campsite itself was on ancient pasture land (hayfever sufferers beware!) and had plenty of space. My husband, our 11 month old daughter and myself headed towards the “quiet” area and parked up. The parking area was right next to the camping field making it very easy to unload and we selected the perfect spot away from other tents who might not appreciate an early morning wake up call from a baby. Our neighbours were a field of sheep and cows who were definitely the noisiest things down this end of the site.

I was a little concerned when I saw only fifteen toilets and five showers for the whole of the site but I needn’t have worried. With fewer than a thousand people camping I never had to queue for the toilets and being pregnant I visited them A LOT. As well as having my pick of the cubicles they were always fully stocked with toilet paper and had soap and water. This was the same for the toilets by the main stage though ironically the spotless indoor toilet block with real flushing toilets and running water was devoid of soap. 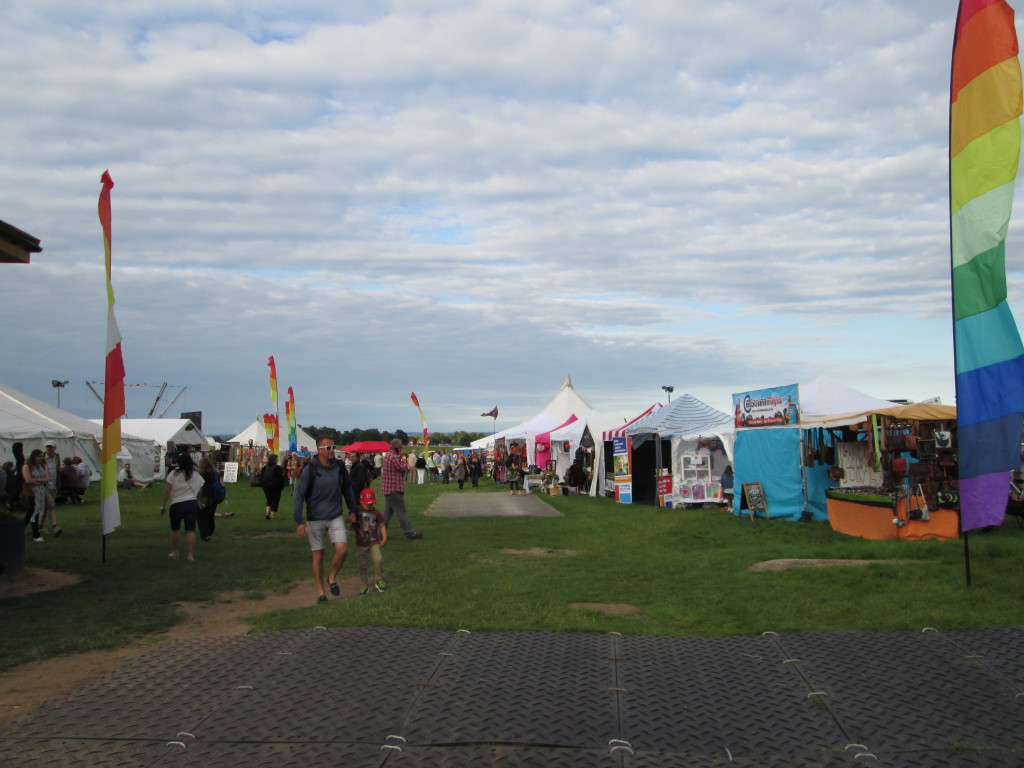 Inside the arena were a range of stalls from local organisations, many with activities for you to take part in, and about three main show tents along with an outdoor performance area. In the racecourse building itself there were smaller rooms used for workshops and the film club. The stages were split into different performances with about three or four acts following each other and it was possible to buy tickets for a single show, as well as weekend passes. People queued prior to doors opening, but with the space inside it was rarely necessary as you could arrive partway through a performance and still get a good view, if not an actual seat. As they did the soundchecks beforehand the changeover between acts was swift and there was little hanging around. The main stage finished around eleven, but there was further entertainment in one of the bars until 2am. The festival site itself remained open all night I believe (didn’t go out to check at 4am) which gave it a nice unhurried atmosphere. As people could stay and chat and play music in the site itself it also helped to keep the campsite quieter for people to actually sleep.

The children’s marquee’s peak time was in the mornings apparently but even then it didn’t seem too busy, especially considering the number of families on site. They offered face painting and craft activities such as mug painting for a donation and had a small performance area for story telling and kids shows. In addition to the tent there was further kids entertainment dotted around site, such as the pirates on the outdoor stage or the Scalectrix track powered by ecobikes.

There is a shuttle bus running into town for £1.25 each way, though it’s only a 15-20 minute walk and I would recommend a trip on one of the days, if only to visit their stunning minster, which has a fun trail where children can spot characters in the stonework.

Food options were varied, with Mexican stalls, a range of pasta, vegetarian, thai and good old Whitby fish and chips. Even the burgers were a cut above – nice thick patties from the sort of farm where they know each of the cows by name. A nice touch was a covered seating area with tables and chairs in addition to the open air picnic tables. No fires or BBQs were allowed on the campsite to protect the pasture but you could take gas stoves raised off of the ground to cook for yourself and many people came in campervans.

Beverly Folk Festival is exactly as you would hope. A really relaxed small festival with the nicest crowd you could imagine. Everyone looks out for each other and it’s almost like a day out with lots of friends you’ve never met before. It has restored my enjoyment of festivals and I can see why quite so many locals popped down to the racecourse each day simply to take in the atmosphere.