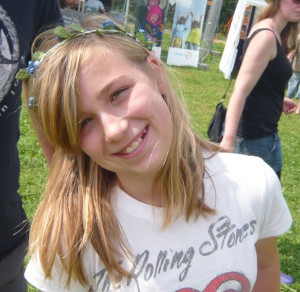 Farmfestival invited us to come and see how family friendly their quirky, hat-tastic, small festival is, so we sent along Danielle with her 2 kids (8 and 10) to try it out:

Luckily, the weather was glorious at Farmfestival this year, except for a heavy downpour on Saturday morning.

We arrived on the Saturday lunchtime but had intended to go Friday with friends. We arrived to lots of parking and no queue. The family camping area was right inside the main entrance so we did not have far to walk. We found a pitch easily enough also although this could be because people who were only coming for the one night had packed up to go home.  Camping areas were all up hill and the stages and arena were all at the bottom, so even in heavy rain the campsites were located on a good spot. 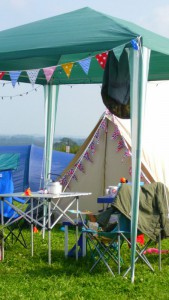 The site is pretty small and accessible. The Family area was pretty small and reasonably full with ‘mostly’ other families. There were some very large groups of teenagers also camped here.  On the Friday I believe the security team had told them to move into the main camping area but they came back. Most of the other campers were all families with quite young children. There were tiny babies to young teens with their parents. The atmosphere was very relaxed and chilled out.

Toilets were Portable loo’s in the campsites with sinks and running water next to them. These got pretty horrendous as the weekend went on and kids struggled with these towards the end of the weekend. They were also not lit at night but this may be something only the larger festivals do?

Next to the main arena was a long drop and these were much better than the portable loos although none of the toilets were maintained. I have previously been to larger festivals were they try to hose them down each day… The queues for the toilets were never too big. 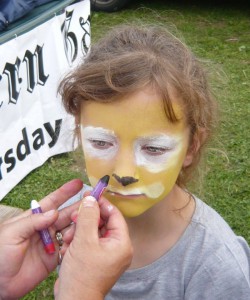 The Farmfestival site is really small and all in one field. My kids were able to run around to the tent and back to where we were sitting with no problems of getting lost. They loved the freedom it gave them.

There were a couple of stalls selling knick knacks and a sweetie stall. There were 2 food places one doing burgers and hog roast, etc. and one doing chips. They were surprisingly reasonable (£3.50 for a cheese burger / hog roast). Other foods were quite small portions though. It’s definitely a the sort of festival worth taking your own BBQ and stove to.

We loved the huge Art Tent where everyone could make paper mache animals and also the infamous hat parade and competition. There was a Punch and Judy show and a bouncy castle, face painting and crazy golf. There were only a couple of rides to pay for so not loads of amusements for you to be asked for money for.  The kids were kept very busy on the Saturday. I am not sure if it would have been enough for the 2 days.  There was a very family time atmosphere during the day. 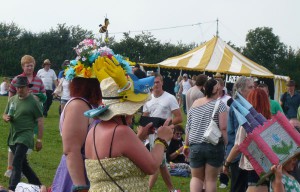 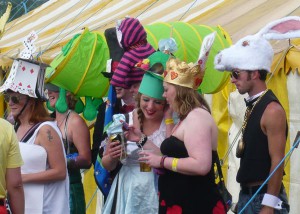 Line up was good. My son is now a huge Dodgy fan. Pete and the Pirates also went down a storm. The ultimate favourite was the Laser Cave Tent which was fantastic. Kids got to queue jump and were greeted with someone setting the scene and giving them some laser protection (tin foil). We then went in to a real experience involving lasers and mirrors and smoke machines. They went back a 2nd time later in the night they enjoyed it so much. 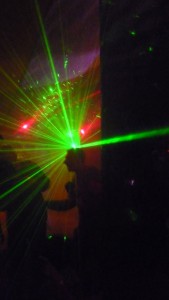 We did try the Drum ‘n’ Bass Tent although this was a bit too grown up and very smoky.

The large Blue tent was decorated beautifully inside. There were lots of acts (ska bands etc) and this was brilliant too. The evening also had Fire Artists in between the acts on the main stage, which was a nice touch.

There was always mobile coverage which was great for when the older ones went off to do their own thing.

All weekend, the only problems we had was around the teenagers in the family camp who were drunk morning, noon and night and kept falling into everyone’s tents. The drunken teenagers would not have been a problem in itself if it wasn’t for the falling in tents part! They fell into ours twice. The kids felt a bit nervous about them being so drunk and falling on them in the night and the shouting and swearing led to a bit of explaining to the youngest too.

The only other gripe is that the music goes on until 4am. The family camp is in the main field so you are listening to it all night. The kids got hardly any sleep at all. A must would be to bring ear plugs! If we had of been there Friday we might have come home on Saturday due to lack of sleep… The main campsite for others was further away.  Perhaps it would have been better to put the family camping further away from the arena so there would be less disturbance at night.

All in all a great small festival really reasonably priced and located. You need to be a prepared camper with all your goodies for the kids as facilities are basic. I think it’s only going to grow!!

We are going back next year, I have already promised my son 🙂