If you’re well prepared then nighttime at a festival can be the best bit, especially if the little ones fall asleep and you guys get to have a beer and a boogie next to the buggy.

If the babies and kids have a crash pad on wheels for the evening then you can rock on.  Taking a buggy, wagon or Croozer for kids from 0-8 is great.  When they get tired they can cuddle up under their cosy blankets, pop the rain cover over, or their Snoozeshade

to keep in the warmth and muffle the sound and then fall asleep to the soft sounds of Muse playing in the background! 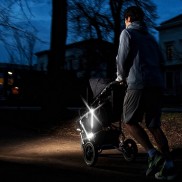 Festivals are a different place at night, and if you are lucky they turn into a magical place full of fairy lights and mellow vibes.  But at other festivals when the sun goes down folks can become somewhat ‘disoriented’.

The main areas fill up more as everyone heads to the headlining acts, and the crowds start jostling, oblivious to families.  I’ve even known gangs of twenty somethings who had been inquisitively watching the kids all day and cooing over the festival babies soon turn into buggy-hating extremists.  It is at this point I would recommend a hasty retreat to the more spacious areas further back in the arena so the partying dudes can do their thang without your great big buggy getting under their feet.

I have been amazed over the years at having not seen people light up their buggies.  The very first festival I went to with a buggy (Wireless 2007) I knew straight away we needed to help people see the pushchair – so a few weeks later when we went to Glastonbury we were fully prepared – we took 5 packets of battery-powered lights, gaffer tape and plastic bags to keep the battery packs in. Get battery powered

It seemed no-one else had even thought about lighting their pram up.  Now I wish I had photos to show you but it did look pretty damn cool!  We had an Urban Detour so the rain cover was raised, inside we gaffer-taped the whole of the inside with lights, and we’d have all the battery packs threaded into a freezer bag where they’d be protected from the horrific rain we had for 5 days.  At night we’d put over the Shade-a-babe, and then the rain cover.  Connie would be flat out from 6:30pm to 6:30am!!

Instead of getting irritated by falling over some stupid pushchair on their dancefloor, tripped out festival goers loved it: “Woooohhhaaa SPAaace Buggy, Maaannnnn!” “Dude, check out that raving baby!” “Can we ride on your disco on wheels?”

Every time people saw it they smiled, they’d say “Hey guys!  Watch out!  Buggy coming though!”  Everyone was just lovely and smiling… such a contrast to the festival experience we’d had before where people were getting so hacked off tripping over the random buggies in their path!

The trick is to always been seen… this means that it’s not a hazard getting round in the dark, and you don’t become a hazard to others.

Light the buggy up with lights, attach a bike bell so you can gently let people know you are there, even pop a head light on the front!  Or use the fantastic EL wire