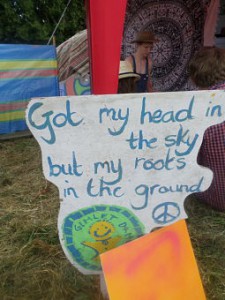 I have a confession, I live approximately 15 miles from where Nozstock festival is held and I have never been before. I have friends that have been but for one reason or another I have never made it there. How I could miss out on such a local gem of a festival? Madness! A mistake I do not plan to let happen again!

Due to the fact we do live so close we thought we would have a slight change of pace and go each day rather than camp. This is due to the amount of camping we have planned this summer so a weekend at a festival and coming home each night was a bit of a novelty for us. I spoke to several families who were camping and I had a quick look round the campsite and it was really good. Family camping was furthest away from the main stage but did not seem like a big trek and of course it had the advantage of  being quieter. There were ample water points and toilets in the family camping area which is always a bonus. The bit I really liked and a great idea that other festivals should consider is that they actually had entertainment for the children in the campsite, so the children were kept busy listening to stories and playing whilst the parents could set up camp.

Entry to and from the site and the arena was painless and I have to say all the security staff and Oxfam GB Stewards on site where incredibly helpful. One family told me how one of the security had helped them carry all the kit to the campsite as they had a broken trolley. Little things like this make such a difference when you first arrive at a festival with children.

The first day was just Dylan and I. The first time I have gone to a festival on my own with him, and I suppose I was a little anxious about it but I really did not need to be. The site is a perfect size for 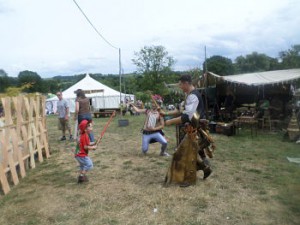 children. They can easily walk around it and there is space for them to play safely. I was more than happy to let Dylan play with the brilliant entertainers in the children’s area whilst I was able to watch the music on the bandstand stage. I could keep an eye on him but actually listen and watch some performers.

We spent the first part of the morning watching everything going on in the craft area: blacksmiths at work, willow sculpting, copper work, chainsaw carving and even some life drawing. We stopped for a lovely stone baked pizza and got comfy on one of the many sofas dotted around the site to watch a couple of bands on the main stage.

The Theme of Nozstock this year was ‘Wildest West’ so Dylan was in his element with Cowboys and Indians all over the place. By the time we had finished lunch we headed to the little wonderland kid’s area where the Nozstock entertainers had made their base. Dylan did not waste any time in getting involved in the high noon shoot out with the cowboys. For the older children there was sock wresting, turkey twizzler game (the game involves gunging and feathering yourself), human scrabble, human drafts and moving basketball.

Children roughly Dylan’s age and younger had the ‘Nozstots Area’ they could escape into. In this area there was a library, sandpit and different crafts activities happening all day every day, a story corner, soft play area and toys for babies, plenty of toys, they had so much you could spend the whole weekend in this area and not need to go anywhere else to entertain young children.

Just across from the little wonderland was the ‘Bantam of the opera stage, they had a variety of workshops, theatre, play sessions and tales happening. Dylan loved the ‘learn to walk and talk like a cowboy’ workshop. The rest of the day was spent having a dance together at the Garden stage, we had a good dance to a great band called Cazal. Over on the Bandstand we enjoyed John Dignam and so impressed with The Man Who Painted Boats, Dylan sat right down in the front and looked like his greatest fan. We left early evening and could not wait to come back the next day. 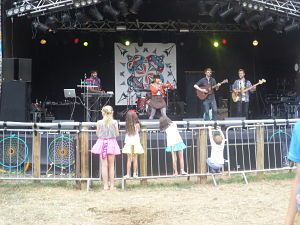 Saturday, we had Mr Lane with us and as he had not been before Dylan could not wait to show him around ‘his festival’ as he was now referring to it. We started off by having a walk around the Cubicle area, this is really not a area for children but in the day Dylan was bouncing around with the ravers and we felt very relaxed with him being there, I think it is important that there is an area people can have a good time child free as well and Nozstock really does feel like they have the balance right, a family friendly festival that is relevant and entertaining to music fans.

Noz, the festival organiser, is a Drum ‘n’ Bass aficionado and the lineup reflects this with some of the most current and well respected artists from the genre on the bill.  We had a stroll to the coppice, again not really for the children at night time but in the day it was peaceful and felt very much like an area that would be lively without children to say the least.  We then headed off to the Little Wonderland area.

Dylan got involved in a kite making workshop. This was so lovely to see as Dylan is a child who really does not bother too much with arts and crafts, he enjoyed it and got stuck in with the ribbons and glue – a great example of how children can learn from festivals. After running around in circles whilst we checked out the first acts on the bandstand, the solo circus started to set up in the main children’s area. He was wonderful and Dylan was immediately drawn into his many circus tricks. He did a show then stayed on and spent time teaching the children. He was incredibly patient with all the children… and big kid Mr Lane who was determined to learn to ride a unicycle!

After this it was time for some lunch and to check out what was happening over on the Orchard Stage (the main stage) again such a lovely relaxed atmosphere, we found a spot on a sofa to sip a couple of pints of very reasonably priced beer and Dylan found a spot with some other children right at the front of the stage to watch Velvet Stream. We made our way back to the bandstand to check out ‘Let’s Get Dollied’,  basically lots of people dressed about as Dolly Parton singing Jolene. On the way to see the Dollies, Dylan excitedly pointed at a stall, The Festival Tails Company, who  make and sell tails for children to wear and encourages imagination and play, Dylan adores his and has not taken it off since. The rain started just before the Dollies but did not stop a crowd (including myself) having a sing along. We stayed for another hour or so but the rain was showing no signs of giving up and as we were not camping we had nowhere to hide so called it a day, much to Dylan’s disgust – he loved it and did not want to leave at all!

I gave this review the title ‘Got my head in the sky but my roots in the ground’  from a sign I saw at Nozstock, I thought it summed the festival up so well. It reminded me of how festivals used to be, small, friendly and intimate. It had a family run feeling about it. So very relaxed and not in the slightest bit pretentious. I know Dylan had a ball and he will continue to walk and talk like a cowboy for weeks to come. He keeps asking when we are going back to the cowboy festival? I have told him without a doubt we will definitely be back next year and every year! Long Live Nozstock!

For more great photos of Nozstock 2013, check out our album on Facebook

One thought on “Nozstock 2013 Review”