Hazel and Gwilym were fascinated to catch Shlomo’s beatbox workshop for kids on the Sunday afternoon and were even more excited to meet him. He turned out to be the most affable and friendly guy you could ever meet and he was great with our two. 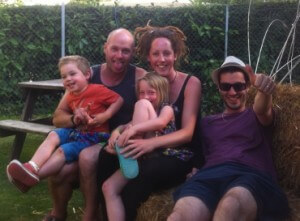 He tells us that he was sick of being away on tour and missing bath times when his first child was born. Realising there must be another way, he started doing more composing and directing and formulated a show for kids that he could do in the afternoons before doing a set int he evening for an older crowd. He now even prefers doing two shows as he says it takes the pressure off both of them. We talk about how he nearly got upstaged this afternoon by one talented nine year old.

Hazels asks Shlomo how often he practices each day

He explains to Hazel how he is quite strict when practising on a show and if he is not in the he will be performing or collaborating.

She also wants to know how long can you do a piece of music?

He duly obliges and makes the sound of a cheese grater and encourages our children to do the same – just one example of how he works so well with kids and can really enthuse them.

We ask Shlomo about his children and how old they are?

He tells us that he has a four year old and a four month old which works really well as his older boy was old enough to cope and the second baby is really chilled. Shlomo is a natural with children and asks them how old they are. This leads on to Hazel telling him that she has some beatboxing to show him. Her attempts are ‘interesting’ but he is such a nice guy he responds with ‘sick’. He thinks that she should show her new skills to her new class mates at school (but will they be amazed or think she is mad?)

What place does beatboxing have in schools?

Whilst Hazel continues with her P, K and T and with her ‘beatboxing’ in the background he goes on to explain how kids can latch onto it really quickly and get inspired quickly. Compared with being given an oboe and some paper with dots on, beatboxing can capture the imagination. It allows children to express themselves and there isn’t a right or wrong with it. Shlomo goes on to say that he has worked with kids from all backgrounds who have taken to it really well and its very rewarding to see them undertaking the process.

So where does the name Shlomo come from?

Unbeknownst to us who thought it was some cool hip hop moniker it is just his name. It is an Israeli name that is actually as ubiquitous as ‘Dave’ although perhaps sounds slightly more cool!  In fact he has found out that there is another Shlomo out there, one who makes electronic music. Don’t be confused!

What are your major influences?

Expecting him to say Afrika bambaataa or the Roland Rat Rap he surprises us by listing a range of musical artists such as Stevie Wonder, Paul Simon, Elvin Jones (a jazz drummer) and Michael Jackson. Hip hop doesn’t really figure too heavily but his real passion is jazz.   He is inspired by odd stars like Freddie Mercury who are one in a million (or perhaps billion) and possibly make his varied output understandable and has even worked with names like Björk and Mike Patton.

He then tries again to get Hazel to beatbox and we tell him that we would love to see his adult show but would be leaving beforehand. That’s definitely one for another festival (maybe Shambala) and he tells us that his biggest gig was playing Glastonbury in 2007 on the pyramid stage. This year just involved Lily Allen and Rudimental!

We leave with our two being inspired to chase around pretending to be motor bikes. Shlomo says ‘It’s great to be five’, which is true but it’s also must be great  to be that good at beatboxing. FestivalKidz think you should check him out if you ever get the chance.