2010 Camp Bestival weather: Warm in the day and a little chillier at night but not really cold cold.

Getting to the festival and setting up camp:

We got there about  10.30 am and still had quite a queue to get in. We hired a cart to take our stuff into the camping field which were quite expensive. Didn’t have a problem getting a space as we were early but it filled up quickly and people were squeezing into any available gap by mid afternoon.

Had been very dry in the few weeks before so was very dusty and hard to get pegs in the ground, make sure you take robust ones!

There was loads of stuff for the kids to do and shows to watch. Large kids field for the younger ones and another small farm animal area.
The kids knew more of the bands than I did which was great as we barely saw them, off doing their own thing. Ellie Goulding was the highlight for me & the finale put on by Rob da Bank was brilliant. Human League & Madness brought back a few memories too. Themed dressing up was fun, some great costumes to be seen. The kids can’t wait to go back!

What would you change / improve (if you anything)?

Would like to be able to use the childcare facility one evening but £60 for a four hour creche session is getting up there. I don’t know what other places charge though.

Any other comments and your Top Tip:

Take tons of baby wipes and if you can, take/cook your own food. Food inside is expensive.

If you have little ones, people had wheeled trollies like the ones Festival Kidz sells to pull them around in and sleep in at night as it’s a large area for little legs and an uphill walk from where we were into the entrance from tent.

Queued for ever to get out and we left it quite late thinking most people had gone, so take plenty of things to entertain the kids in the car.

Tons of loos but as you would expect very smelly and rarely any paper left so take your own. they have antibac gel in dispensers in them not sinks.

Very easy to get around and well signposted. My phone coverage was fine mostly with vodafone but t-mobile and orange wasn’t so good. Walkie talkies are a better way to locate the kids

Absolutely, everyone around seemed friendly and had no worries about stuff going from your tent although obviously you wouldn’t leave anything of value.
Had no worries about letting the kids go off but they were a bit older. Will be a different experience this year as I will be taking a 4 year old, yikes!

Yes, we are going again this year.

Submit your own festival reviews HERE!

Our friends at LittleStuff.co.uk have kindly let us share their great review of Camp Bestival 2010: 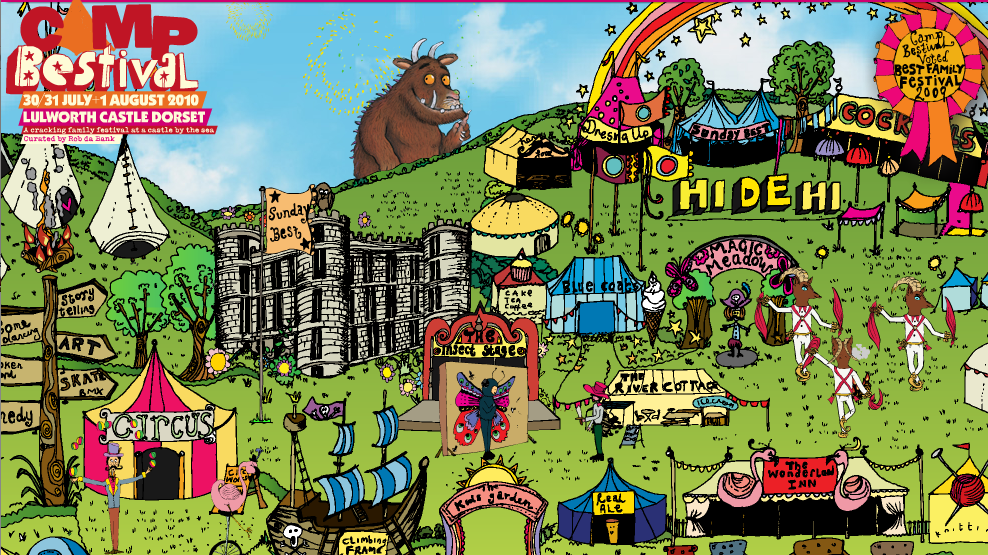 Camp. Bestival. Is over. for another year.

I have to review… but it was such a monumentally HUGE weekend, it would be difficult to be concise. I couldn’t tell you about everything, it’s just not possible, Camp Bestival is too huge an experience. For those who don’t know, it’s the first proper real grown up festival – that’s actually aimed at families. You know, those of us who grew up on the 90′s, have now got sensible jobs and partners and children… They say it best themselves, actually –

“Mix in entertainment of the highest order, splendid music, the biggest boutique campsite ever, excellent facilities for the outdoor life and a generous sprinkle of Bestival magic and you’re in our world.”

Think Glastonbury – set in a Butlins camp. We pretty much spent the weekend just meandering around. The programme told us there was no way in the world we would get to do everything we wanted, so we decided on the gentle approach and just waited to see what would cross our path.

Which was how we joined the Air guitar competition, spent a fab half an hour furiously wheeling and dosey-do-ing to Skinny Lister, watched Shakespeare become rap, stretched out in a family-sized hammock, made head-dresses out of the strongest leaves in the world… and simply discovered so many amazing things.

The food. Oh, my, the food! So much, and so varied. We sampled some, but would have quite happily stayed right in the food alley and tried lots lots more. Pies and mash, fish and chips, burritos, beef burgers, lamb burgers, veggie burgers, fish burgers, jacket potatoes, curry, chilli, Greek, Italian, French, Indian, Chinese, Japanese… Oh, and not forgetting some of the very finest hot chocolate ever to be tasted. 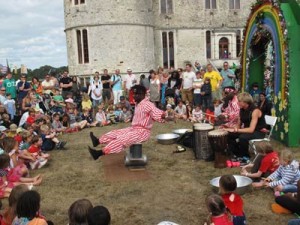 There was a rather fabulous Pimms double decker bus (right next to Boden’s pavilion. Such fortuitous planning).  Stacks of activities for the children (a lot you had to plan in advance for, as they are in group sessions, so our just-mooch-round approach went against us there), tumbling acrobats who were genuinely hilarious, the tiniest caravan in the world who held a group of beat-boxers which I physically had to manhandle the husband away from, The Gruffalo, Mr Tumble (OH! SO wonderful!), the Penguin Books tent, the Victorian circus, the English National ballet…

Of course, this is a festival for families, and children need to be kept entertained, so every corner may hold a surprise – box forts, medieval jousting, a slippery slip, ,puppet shows, madly-put-together bicycles to ride backwards, giant blank statues and free paints – all available to delight and keep quiet whilst mum and dad slip off to the Pimms bus watch proudly.

We are lucky enough to live right on the doorstep (ish…), so we had day passes, which are only available to local people and headed back home at night. But next year we plan on Family Camping – we felt we were missing out by going home, despite the lure of the hot shower. And I have my eye on one of the Yurts, or maybe hiring a ready-built tent in the Tangerine Field. Saturday was much busier than the Friday, and not quite as relaxed in atmosphere – but still a wonderful, amazing place to be with your family. 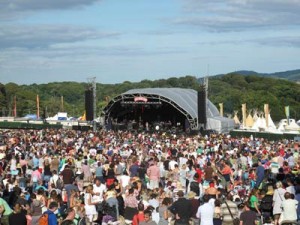 Standing on the castle wall, looking out over the festival grounds was a perfect place to stop for a sit down and a bite to eat – you could people watch for hours. So very many people laughing, shouting, dancing, singing, meeting and greeting… Everywhere there were men dressed as fairies, ladies with rose head garlands (where from? I never did find out, and I SO wanted one myself), people in wigs, waving fairy wands, faces painted with butterflies and red toadstools and children of all ages running around wearing wings and mad colours. We felt quite under-dressed in our jeans, to be honest.

The whole weekend battered our senses at every turn. one minute we were in a room watching a 3D film preview, and then ten minutes later we were gawping at BMX-ers flying over our heads. The children learned circus tricks and rode wacky vehicles. We sat quietly under a tree, drinking long cold cups of fresh orange juice whilst we listened to Ellie Goulding. And as the sun went down on Saturday evening the magic really came out and sprinkled everyone. 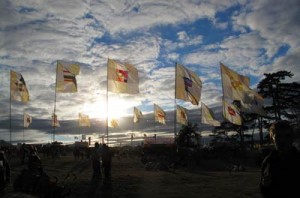 Walking back from the Freestyling Sports Field, watching the flags snap in the breeze, bubbles floating seemingly from nowhere and everywhere, lit by the golden rays of the summer sunset, my tired family content to walk in silence, smiles fixed to their faces. 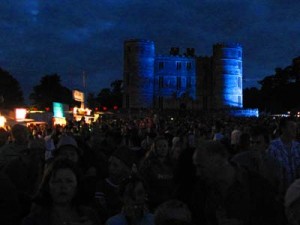 After a brief fling with DJ Yoda (I wish we’d seen his Disney set on Sunday), we headed for the main stage area, the field right in front of the castle, and threaded through the children-nodding-on-blankets-filled  crowd towards the front (ish) so the boys could watch The Cuban Brothers – and jump, and roar, and sing, and dance and be enthralled. Finally, the smallest had had enough – I headed out to the sidelines with them whilst husband and No.1 son set their shoulders and dug further in to the crowd to see Madness.

And so, I rounded off my night with a 3yr old asleep in her pushchair, two boys lying on a rug 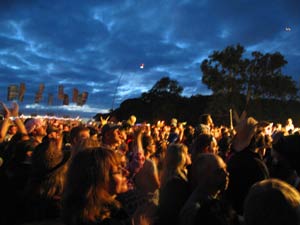 listening to classic ska and watching the stars through the fluorescent lights of the food vans. Looking around me I realised I was in a bank of pushchairs, laden with rugs and water bottles and small children as Mummies gathered contentedly to watch and enjoy and avoid the crush in the middle with their sleepy offspring. To my right was a rather elderly couple in their striped fold-up deckchairs and flask of tea – who got up and danced to It Must Be Love with their grandson.

And that was exactly everything that Camp Bestival is all about. Families, music and fun – topped off with a whole heap of quirk and happy-mad-ness. I’d show you – only I left my camera in the rucksack which I thought was adorning the husbands back. But which was actually being used as a step for the boy to see Suggs. When they finally made their way back to me at the end of the (stupendously excellent) concert, No.1′s radiant beam of joy at his very first live concert was reflected in the husband’s Madness-inspired euphoric grin – and pretty much made up for the broken phone and camera.

Next year we’ll be a little better prepared – we’ll take more cash (there are cash points, but there’s a queue and they charge), and a big Radio Flyer wagon to pull around tired children, a big blanket and more water. Plus, of course, next time we’ll be wearing fairy wings, tutus, flowers and sparkly wands aplenty.

Brilliantly Weird and Utterly Wonderful; Camp Bestival. We  can’t wait to ‘do’ you again.

For more from Little Stuff visit their blog on www.littlestuff.co.uk

One thought on “Camp Bestival 2010 Review”