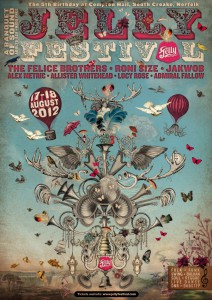 Set in the beautiful grounds of Compton Hall in Norfolk, Jelly Festival celebrated it’s fifth year and landed on one of the hottest days of the year so far, lucky considering so many festivals have either been cancelled or had difficulties due to the dreadful British Summer we have had so far.

We arrived at midday and drove in easily and were directed by stewards to the carpark. The walk to the main arena was less than 5 minutes.

The first thing we noticed was how small the festival site was and yet there seemed to be a lot crammed in. There was a main stage called the Living Room (which was decorated like someone’s living room funnily enough) the Bedroom Big Top, the Observatory Dance Dome,  Summerhouse Cocktail Bar, and the Reggae Rumpus room. Due to the small size of the site there was a lot of sound bleed and I found I couldn’t really hear the individual stage’s music. So possibly too many stages for the size of the site.

That said, it was an easy to navigate site and we felt confident to let our 3 year old run around.

The children’s area consisted of 3 tents, a sort of gazebo and a little “curiosity” caravan. On offer was making fairy houses using natural materials, a story telling tent (I’m guessing at this, it had hay bales to sit on but it was empty) and a tent that was signposted ‘lost children’ but inside was a mat with a few baby toys scattered on it and two girls painting cardboard and encouraging children to paint plastic bottles and cover them with glitter, another lady appeared and started painting and a child next to her started painting. Not long after the two girls packed up and disappeared. I found this odd, not only was I confused as to what they were “expecting” from the activity they packed up without a word, but there was no schedule or idea as to what activity was going on and they seemed to run out of materials very quickly. (Eila asked for some paper so she could paint, she was given a sort of polystyrene plate to paint on on which the paint didn’t sit on which I thought was pretty poor considering the lady painting had a basket filled with paints and painting boards)

Outside there was a variety of circus like equipment to play with, like plate spinning, poi balls, diablo and juggling but there didn’t seem to be anyone helping the children. I also noticed a few groups of young people doing finger knitting and making pompom balls but again this seemed so random, someone would sit down with a bag of wool and others would just sit and join them, then they would get up and go off again.

I didn’t feel there was enough activities to keep a 3 year old entertained at all and in the “craft” tent the sound bleed was throbbing in our ears so much that it gave me a headache and we had to keep the children’s ear defenders on all the time.

I really felt the children’s area was a little half hearted, poorly organised and not terribly well thought out, and after five years I would have expected better. That said, it seemed a very friendly atmosphere, an intimate site  and there were lovely local food stalls there. But the extreme heat, coupled with the aforementioned soundbleed and a very grumpy hot and bothered baby meant that we only stayed for few hours, I would have not liked to have been camping as I overheard there was a severe lack of toilets in the campsites.

Would I go back? Maybe with like-minded friends or my husband, and minus the children, but certainly not as a family.

One thought on “Jelly Festival 2012 Review”