Review by Amy Battle and 3 children, aged between 9 and 12.

There comes a moment at any Festival where the adults want to collapse/drink beer/listen to their type of music/visit their inner hippie and the kids don’t. The younger generation wants to roam and wade in mud and buzz around doing their own thing in their own time. And it’s just this balance that the Larmer Tree Festival has cracked.  There’s something for everyone and then there still is somewhere to sit and chill when you just don’t want to be doing any stuff at all.

I didn’t think that I had pre-conceptions before I went to Larmer Tree but maybe I did. Or maybe now I will be using it as my benchmark for all other festivals I go to.  It wasn’t what I was expecting from a festival – it was so much more. 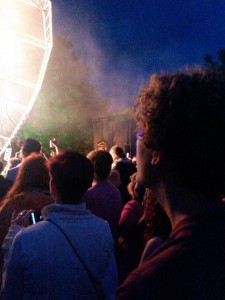 Larmer Tree Festival is located in the beautiful Larmer Tree Gardens, just outside Salisbury, with numbers strictly limited to 5,000 so you don’t get that crushed-by-people feeling. This in turn means that, if your kids are old enough, you can let them wander and do their thing without constantly worrying about them.

We arrived on the Friday night in time to hear Frank Turner‘s superb set on the Main Lawn. Our gang of 7 kids quickly took themselves right to the front and were exhilarated by po-going and letting loose at the front of the stage.  This was a first for the younger ones and it was fantastic to watch as they lost themselves to the moment and became a part of the bouncing throng.

After that we walked back to our tents via the Lostwood, which was a very beautiful, calming and creative area with lots of interesting things at each turn.

We were at the festival with 2 other families who had arrived before us and set up camp in the General Camping area. Whilst this is close to the festival, the General Camping is an unrestricted zone which means lively groups of teenagers and a throbbing bass from the Dub in the Big Top which in turn equals not much sleep! The next morning one of the families moved to the Quiet Camping which was probably more suitable for adults in their 40’s who have been there done that and just need a good nights sleep… We couldn’t be bothered to move so braved the next few nights amongst the party people. Note to self: camp in Family or Quieter Camping next time!!

Friday night and all morning Saturday we had thunder, lightning and rain. Lots of it. And whatever you say, it’s a drag and takes some of the fun out of camping at a festival. But then the sun came out again and kids over the age of 10 got involved with the Youth Zone and they all got involved with Teleconfusions and the Comedy Club for Kids. The adults went off to Creative Writing Workshops, Slam Poetry Film talks in the Pavilion and a bit of everything in The Social. 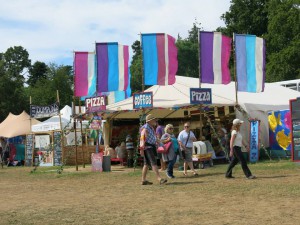 When you get hungry there is lots of choice of really great food, but it isn’t cheap if you’re feeding a lot of mouths. Be prepared to pay £7 and up for a plate of food and around £4 per pint. The toilets weren’t that great and regularly ran out of toilet paper (although I’m told by more experienced festivalers that they are far better than most!).  The demographics appeared to have a definite Hunter Welly vibe, but I suspect the cost of tickets makes it prohibitive to some people.

Sadly I had to leave at lunchtime on Sunday.  Romany (Festival Kidz founder) stayed on and told me later that I had missed the most amazing day of music! She raved about an incredible high-energy set from a Spanish group called La Pegatina that got the entire crowd on their feet, Coco and the Butterfields and their genre-busting ‘Fip Fok’, and of course headliner Tom Odell who couldn’t quite get over the beauty of the gardens he was playing in! A couple of the remaining kids in our gang even got to watch Tom’s set from the photographer’s pit in front of the stage with Harry from Hudson Taylor! Lucky lucky things…

The music was diverse and all the acts I heard were of great quality.  Our teenagers made long lists of bands they wanted to find out more about after seeing them.  There were many new discoveries for all of us (Staff Benda Bilili was a highlight here), as well as a few more familiar names such as Stornoway, Dreadzone, the Dub Pistols and Gentleman’s Dub Club.  I had missed the legendary Tom Jones who opened the festival on Wednesday night, but I hear he went down a storm!

Despite leaving early, I have a weekend full of fantastic memories.  For me, the real beauty of Larmer Tree Festival is in the small and often unpredictable random moments; the weird and wacky street performers, early morning yoga on the lawn with the peacocks, feral children and hanging out with friends.

Would I go again?… “Can we come again next year, pleeeeease, Mum” – think that’s a definite yes then! Maybe see you there?  😉 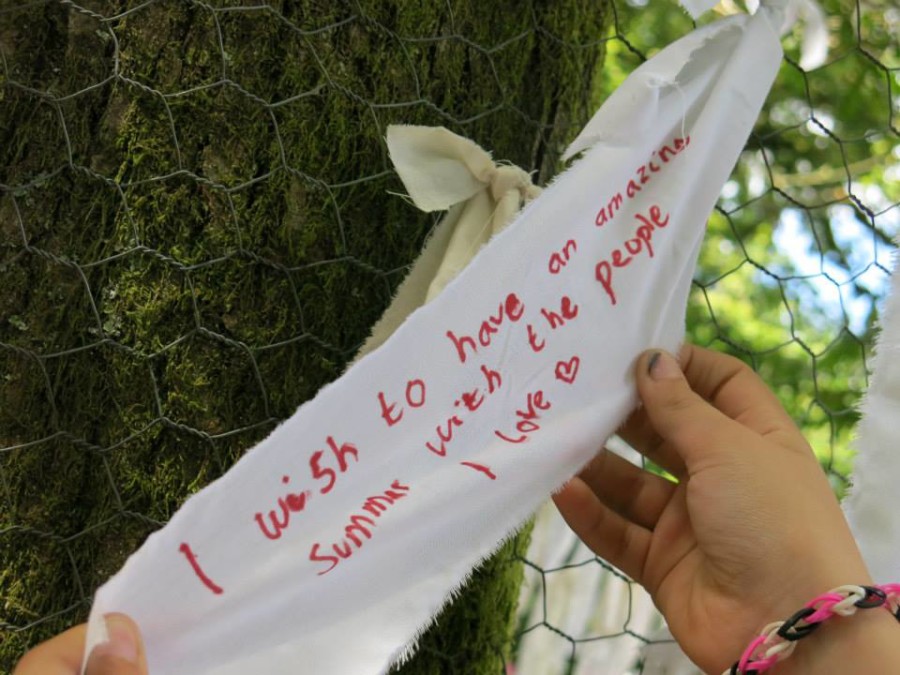