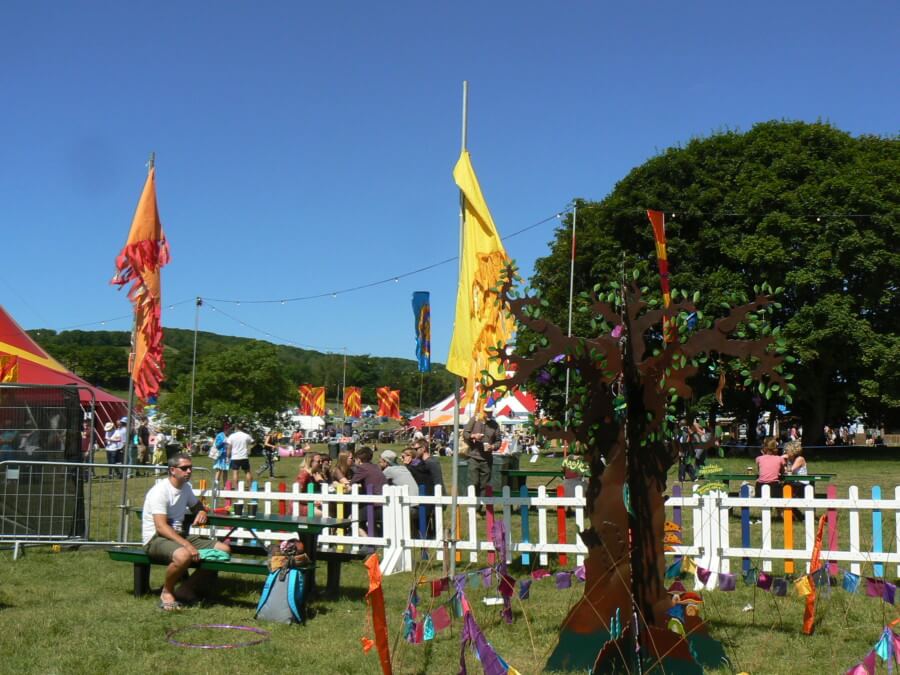 The size and diversity of Love Supreme was a big and brilliant surprise. For the last few years, the South East’s best jazz event has boasted some fantastic line-ups, and this year’s was just as strong. For some reason I had envisaged Love Supreme as Pimms and picnic in the park. What we actually found was a proper full on festival. 30,000 tickets were sold in total. These were a combination of day tickets and weekend camping. It’s only twenty minutes up the road from where I live, so I’m quite disappointed with myself for the fact that I haven’t attended with my family every year!

There were three main stages, plus a bandstand, and bars playing music into the night. The Verve Jazz Lounge venue had a cinema screen showing films about jazz, and also playing full albums. The bandstand was primarily a jazz stage, but the big stages featured a whole host of music genres including motown, soul and pop acts.

Corinne Bailey Rae was lovely and did a gorgeous cover of Bob Marley’s Is This Love. She performed Put Your Records On fifteen minutes before the end of her set though. I found that quite perculiar but assumed that the rest of her songs must have been well known to everyone except me!

The biggest crowd pullers of the weekend were undoubtedly The Jacksons. My two loved bopping along to their classics such as ABC, Boogie and I Want You Back. Again though, the show seemed a bit back to front, with the first half featuring a lot more favourites than the latter!

I caught a few minutes of Sons of Kemet in The Arena, who were excellent, and definitely an act I will look out for in the future. 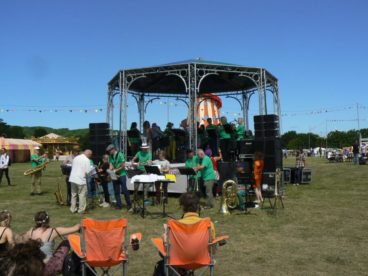 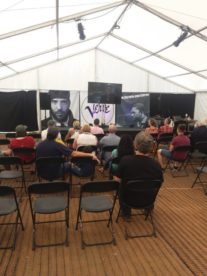 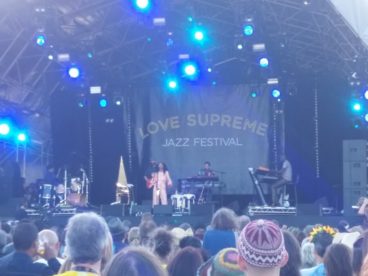 We stayed in accessible camping. Apart from the rule that we had to arrive before 6pm Friday and leave after 8am Monday, which was only observed half the time, it was great. There were only four or five toilets and two showers, but because the campsite was so tiny, so were the queues.

General camping was much bigger, with a short walk from the car park. There were ten showers oddly located just outside the campsite, that had queues of about an hour in the morning. If there was a camping shop, I didn’t find it. (This meant I had to borrow my son’s blanket after my shower as I’d forgotten to pack my towel! He was thankfully very good about it!)

The amount of glamping options was astounding! There were traditional gypsy caravans; various sizes of yurt; bell tents; tipis; teardrop pods; normal tents; huts (similar to beach huts); if you can think of it, it was probably there. There were a number of different providers, also offering facilities such as free tea and coffee, and phone charging.

I counted twenty showers for the boutique campers, and they also had plenty of flushing toilets. 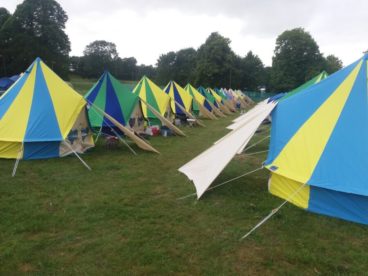 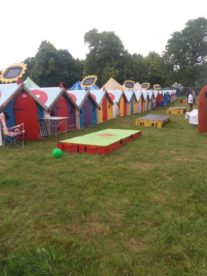 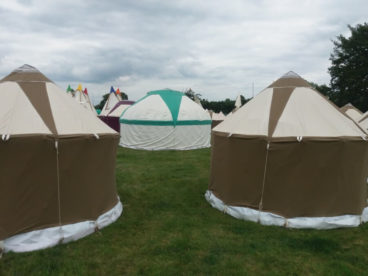 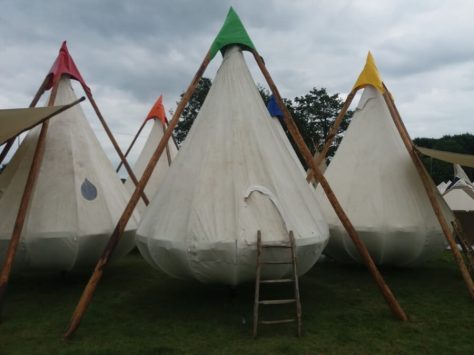 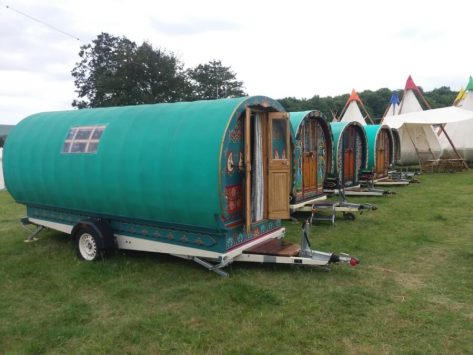 Love Supremium and other extras

If guests were prepared to pay a bit more for their tickets, they could access Love Supremium. This fenced off area had a fantastic view of the main stage. There were a large number of wooden picnic tables and chairs. (However, these were all generally claimed and held on to from quite early on in the day.) Love Supremium had a few food outlets and a bar for the exclusive use of the Supremium wrist band wearers, and of course the added luxury of proper flushing toilets. My two children enjoyed the table tennis in the corner of this area. That suited me as I could watch the bands as they played. The bar had a mini grand piano for anyone to play on. The drinks were served in real glass glasses – very posh for a festival! 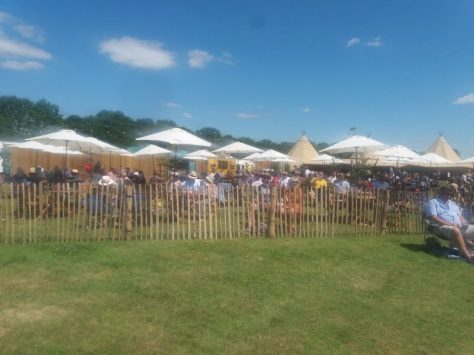 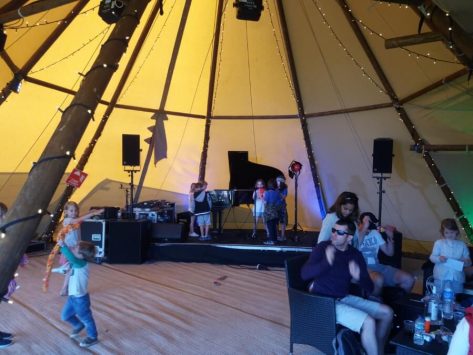 Love Supremium customers could also pitch their tent at one end of the glamping field, with the extra showers and toilets. There was even wifi at the end by Glyndebourne Manor! They also had their own car park, with a compimentary trolley service. 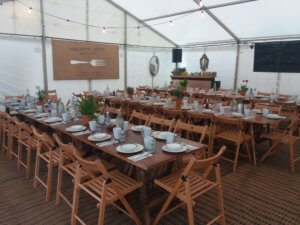 Outside of Love Supremium was a fine dining tent. I didn’t try the food, but it looked splendid. Diners could enjoy their fine food on proper crockery with drinks in stemmed glasses. Breakfast was £20 for two courses. Lunch and dinner each consisted of four courses and a welcome cocktail and would set you back £45 for a meal. I have seen this concept at a few festivals, and while I like the idea of good food on real plates after days of fast food on paper, I haven’t been convinced to push the boat out this far yet.

The kids’ area was simple and yet wonderful. About half of it was shaded, which I was so grateful for in the heatwave that we had over the weekend. In this part, children and their families could practise yoga, weave Gods Eyes, make candles, learn about bees, and then later conduct science experiments. There was music and a Naughty Fox! The uncovered side had a swing ball, a low badminton net with plenty of rackets and shuttlecocks. There was also enough space for an impromptu makeshift mini football pitch. In one corner was a trapeze, and in the afternoon there was a session to learn how to use it. 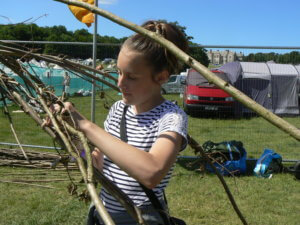 The folk from Wild Wood Fun ran a bender building session which was extremely popular. Hamish and Charlotte were absolutley amazing with the children who were thoroughly engaged and gained so much enjoyment from learning from their expertise. Wild Wood Fun is a group based in Hurstpierpoint, West Sussex, with the sole purpose of enabling children to enjoy the great outdoors – making fires, foraging, slacklining and of course building dens. At their Hurstpierpoint group they have even had sleep outs in the dens that the children have made themselves. At Love Supreme, they taught children the art of building just such a den. All activities were free of charge in the kids’ area.

My two happily spent hours just hanging around the kids’ area, making friends and playing with the different games that were set up. It ended up actually being me who suggested that we go off to have a go on the fairground rides. 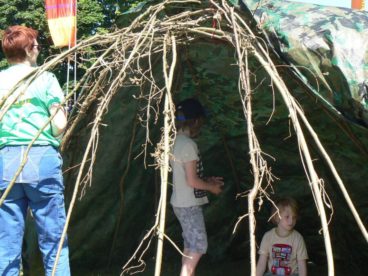 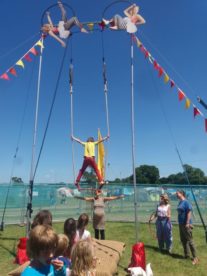 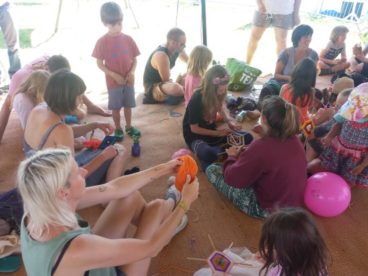 There were about half a dozen traditional rides in the centre of the festival arena. These included a helter skelter, coconut shy, hall of mirrors, mini train and merry-go-round. The Ferris wheel had an awesome view of the stage from the top, and we noticed lots of people not blaming it on the sunshine when the Jacksons were headlining on Saturday night. Considering that we were at a home counties festival, I found the prizes quite reasonable. Two rides down the helter skelter were £5.

They had everything! The queues were odd, as most of the curry vendors had massive queues while others such as the falafel stall had none. (I opted for some very tasy falafel as a result!) Prices were at the upper end of the festival scale, for example, a pizza was £9. There were lots of bars with lagers and fruit ciders selling at between £5 and £6 a pint. Fentimans ran a very popular little cocktail bar.

I think some improvements are needed here. There was a large viewing platform for the main stage and we just about managed to use it for the Jacksons, but there were no stewards. There was a small sign indicating that the platform was just for those who really needed it. However there was noone to enforce this. They also provided chairs, which may have been thoughtful but was also a little naive if they were expecting people to assess their own level of need for them.

The accessibe campsite was almost ideal. It was easy to get to from the road, and was perfectly located next to the main arena. We could hear and half see the stage as well, which I loved. It was flat and well laid out, although nothing was done about a tent being erected in the fire lane. It had good facilities and everyone was very friendly. They had a bizarre health and safety rule, that I’ve never come across at other festivals, that anyone wishing to park there had to arrive by 6pm Friday, and not leave before 8am Monday. I was aware of this rule before we arrived on Saturday and was happy to observe it and just go wherever we were directed. We were directed round in a circle and then to the accessible campsite, and told to drive in and unload. This I did, and then the security guard on duty told me that I could park there as well, and assured me I would be able to leave the next day. “Great!” I thought. We had a lovely time at the festival. We slept fine on the Saturday night, only a little disturbed by the noise of all the day ticket holders making their way back to the car parks in the night.

Fast forward to when we were packed and ready to go on Sunday afternoon: I let the security guard on duty know that we were about to leave. I thought this was curteous but it turned out to be very foolish. Of course he couldn’t let me leave, it was against the rule! I explained that the previous security guard had okayed it. He then had to radio to his superiors. Their hands were tied so it went through to event management. After an hour of me being very polite about it all, they still weren’t going to let us go. As I’d had enough of everyone being terribly friendly but not very helpful, I informed them I would be leaving and started my car. At this point they hurriedly made the decision to let me drive out with a member of the event management team waking in front of me. Problem solved.

I found all this extremely unnecessary and it meant that an otherwise great weekend ended on a sour note. If they can’t do away with this rule completely next year then I would suggest that they have two distinct areas for camping and parking for those with access requirements. It works well at other festivals and there is never much of a distance to lug everything from car to pitch.

Would We Like to Go To Love Supreme Next Year? 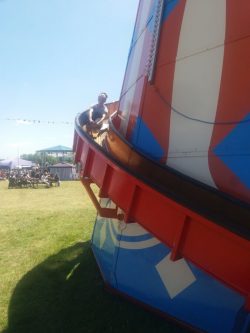 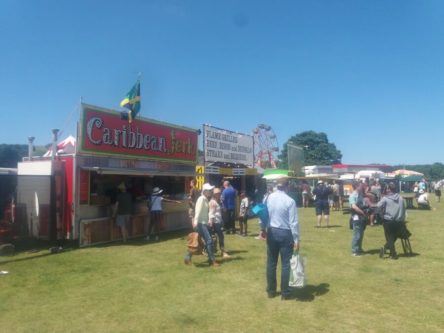 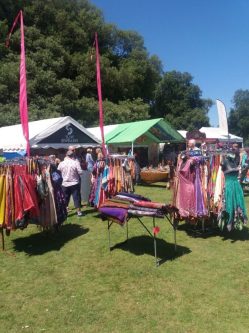 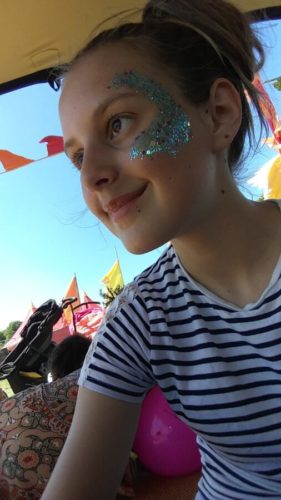 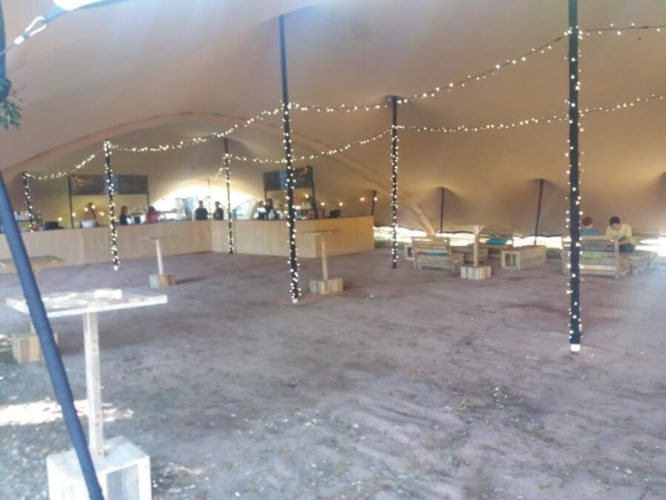