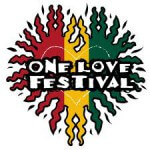 One Love 2012 weather: Lovely sunny weather with a breeze – couldn’t have been better!

Parent Review by Nancy (with a 2yr old)

Getting there and entry:  We arrived on the Saturday morning: no queues to get into the site and immediately found really helpful staff in the car park who were happy to help us out. The campsite was a short (and flat) walk from the car park and was really well appointed with incredibly clean toilets – with loo roll! – and a shower block. My daughter was very happy to be given a wristband.

No dedicated family camping area, but lots of families around; my 2 year old and I made lots of friends. There were a couple of drunken hollerings at 4am, but nothing too antisocial: certainly nothing like my pre-children memories of Reading festival. Our lovely neighbours were happy to chat to my daughter while I wrestled with the tent. A really friendly atmosphere.

Entertainment:  Line up was pretty good: we both enjoyed Frankie Paul who played a fantastic set.
One point for people with young children is that it was really very loud, even at the furthest point from the stage: my daughter found it too much any further in, even with ear defenders. The stages were a bit too close together so it was hard to hear individual songs unless you were close to the front of a particular stage. Given my daughter’s aversion to loud noises, we had to steer clear of the Sound System tent which was a shame – what I could hear sounded good!

My biggest gripe was that many of the bands advertised on the website didn’t appear: the Lively Up Yourself stage (and performers) didn’t feature at all, several other acts only appeared on the VIP stage which you couldn’t access with a standard ticket, and this wasn’t clear enough on the website. This seemed to be a common complaint on the campsite. I hear there were a number of problems with the venue and the local council though, which probably had a lot to do with it.

Children’s activities were mainly a couple of bouncy castles,which cost an additional amount to access. The website also promised that Rastamouse would put in an appearance, which turned out to be some storytelling in a tent: this was fine as far as it went, but led to a lot of children wondering where Rastamouse (or any Rastamouse music) was.

There was a tent offering space-hopper rides and some art/craft activities which were a little old for my daughter, but she quite liked running around.
Again my main gripe here was that the festival did advertise that there were lots of activities for children at the Hop Farm – there are, but it is next door to the festival and needs a separate entrance ticket – not part of the festival itself. Not great when you’re trying to explain to a toddler that the Victorian roundabout is next door and can’t be accessed, even though you can see it over the fence. It would have really helped if this had been made clearer.

What improvements would you make?  Much clearer information on the website and in advertisements – please please make it clear that the Hop Farm is next door and not part of the festival!
Is the VIP area really necessary? This does not seem to sit well with the One Love ethos.

Top Tips…  Bring food, or bring more money than I did!

Site and Facilities:  Daughter flatly refused to use the portable toilets, but the campsite ones were great.
Food stalls were fairly expensive and not a lot of variety; next year I’d bring my own food.
Very easy to get around the site and it was surprisingly pushchair-friendly.

Did you feel safe?  Yes but there were no specific child welfare/ lost child arrangements though, so had to watch mine at all times. Friendly crowds though, so it felt very safe.

Would you go again?  Possibly – more tempted by Shambala though

What was your most memorable moment?  Watching my daughter dance to Frankie Paul.

If you took your family to One Love (or any other festivals) this year, please share your experiences using the comments below.  Hearing it as it is from fellow parents really helps families to decide which festivals are right for them.