A sign on the way in says “Literary Festival”. But at Port Eliot we found something far more wide ranging. While other country estate festivals are relegated to farmland or perhaps the deer park, at Port Eliot there is music in the church, short stories in the walled garden and history, both listened to and lived, by the glorious meandering river. 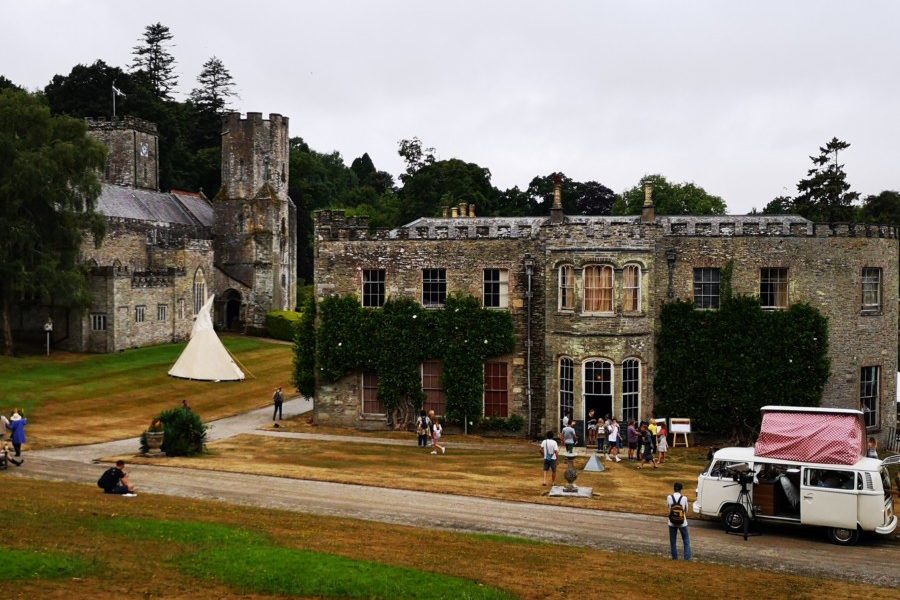 The festival feels like it has grown gently across the estate. The size of it means the program can be very varied and packed full without the site ever feeling crowded.

There was always a spot to sit and relax by the river or take shelter under a tree. Although on our first walk around we saw lots of people cooling off in the water and instantly regretted leaving our swimming costumes a trek away up the campsite hill. At that point a quick dunk in a cool river would have been much appreciated. 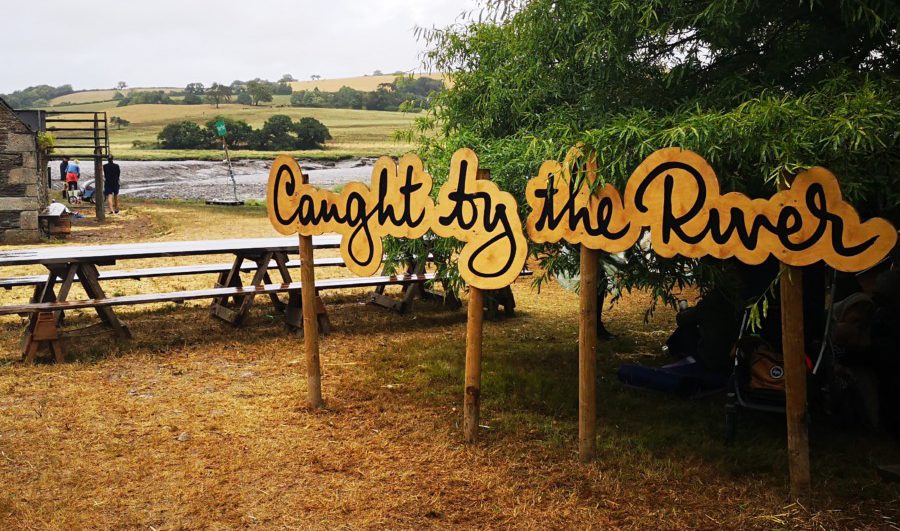 We’d arrived in glorious sunshine but didn’t enjoy it so much when we found ourselves in a long and slow moving queue to get on site. This was caused by bag searches, which is understandable.

But while our kids’ backpacks of toys got a thorough check, our fully loaded trolley received only a cursory squeeze. So I’m not sure the safety benefits made up for the time spent baking in the sun.

There was also some confusion over which queue was for what. But the friendly stewards did their best to sort it out and I’m told things got more organised later on.

The campsite itself is spacious but sloping. We chose to stay up at the top of the hill in the family area but you could camp right down among the action if you wanted.

There’s a large live in vehicle field, a pre pitched tents area and a huge array of glamping options.

Toilets in the campsite were the plastic cubicle kind and were generally fine apart from the breakfast time queue. Showers were down the hill a bit and cost £2. Elsewhere on site there were some toilets with sinks and a lot of composting loos. There was also the option to pay for a premium toilet pass though personally I think decent toilets without a massive queue shouldn’t be considered a luxury.

Port Eliot is probably quite happy with a luxury tag though. I found champagne and oysters before I spotted burgers and beer (£5 a pint) and many traders offered clothes that would go down well in a London boutique.

There is a great range of food stalls with vegetarians well catered for and everything from local seafood to Persian street food. A whole section of the festival is dedicated to culinary talks and workshops.

The entertainment was comfortably high end as well. I expect everyone who went could give you a different highlight from the weekend.

As a mum to small children it was great to have the opportunity to attend a few talks and readings (rather than just singing twinkle twinkle for the umpteenth-billionth time). This required a bit of negotiation over childcare with my husband as we were too late to book the kids into the woodland creche but we both managed to get to some proper grown up things.

I really enjoyed Hollie McNish in the Poetry tent. Ok my break from parenting was listening to someone talk about parenting but she was very funny and it’s refreshing to hear the gritty realities of motherhood spoken boldly in verse. I also managed to sneak into the back of the Idlers Academy for some other talks while baby Ada slept in her sling. 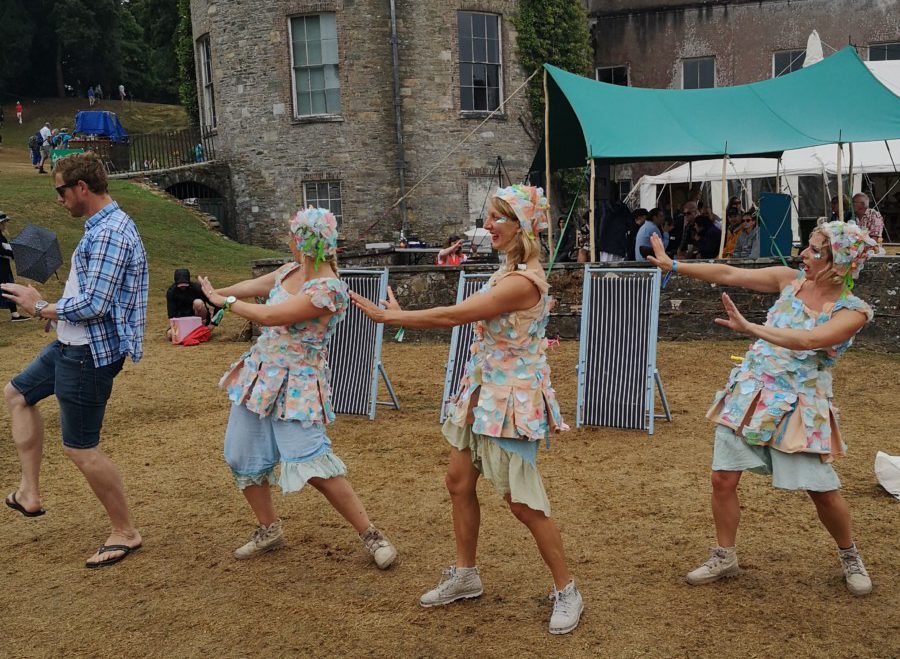 That sling turned out to be an essential bit of kit for the weekend. Our tiny city buggy was near useless on dirt tracks, especially with the Wildlings Wood children’s area being on top of a steep hill, and not the hill we were camped on. I expect our big off roader would have made life a lot easier, especially when we also had to drag waterproofs around with us.

Port Eliot is perhaps better suited to families with slightly older children. We didn’t find a huge amount to entertain Ada other than a small ball pool in a tent in the kids area. Our 5 and 9 year olds coped well with the terrain and had a great time. There was a big teens tent that seemed well used too.

Our “big” girls loved the trapeze act and the Mossy Crow group, who kept them spellbound with a show in the children’s area before leading them in procession back down the hill for storytelling, crafts and games.

Martha (5) had a great dance at the Caught By The River tent when Gwenno Saunders played on Thursday night. We even learned how to say cheese in Cornish.

But for me the best moment was watching a storming Flamenco performance. Warm and dry in huge tent, while a real storm battered the valley around us.

The storms have to make it into the review somewhere. I always feel hugely sorry for festival organisers when they are hit with bad weather.

It must have been particularly galling this year. Most of us have been baking for what seems like a very unBritish length of time so why did we have to have pouring rain and high winds on the last weekend in July when people were pitching up at festivals all over the country?

Port Eliot seemed to weather it fairly well though. With most of the entertainment taking place in tents there was no reason to miss anything.

We had to get home on Sunday, so sadly it meant an early exit for us. We packed up on Saturday night before the second wave of wind and rain hit. I’m told that by Sunday morning a lot of people had left and quite a few tents had been wrecked but the brave festival goers who stuck with it were rewarded with easy access to the previously fully booked workshops.

I was sad we had to leave early, Port Eliot was a lovely festival and even if we’d stayed the whole time I’d never have managed to see and do all the things that interested me in the program.

It was our first trip to a Cornish festival, but  I can see why so many of the people we met keep coming back year after year. 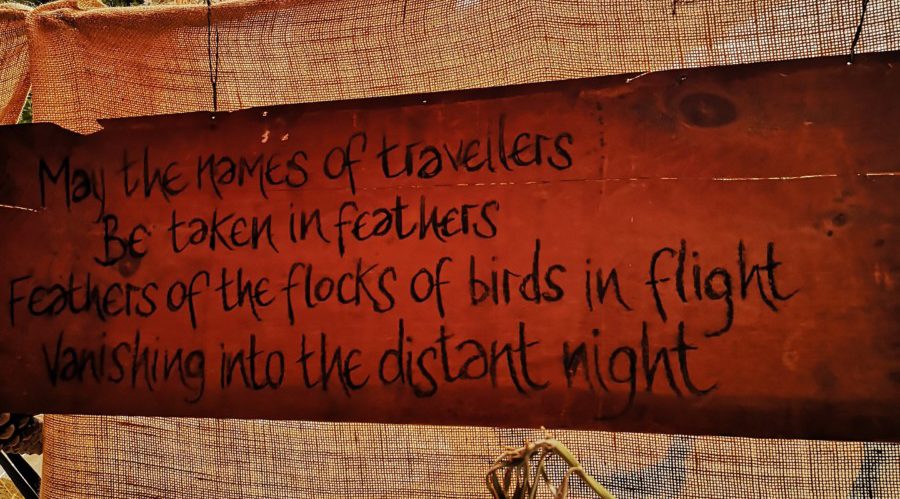 Please see our factsheet for more information on Port Eliot