It’s hard to think of Bearded Theory without remembering the delightful Red Barrows.

Festivals often have regular acts that are invited back year after year due to their unwaivering popularity. Bearded Theory’s staple favourites are The Red Barrows from Bonsall.

Who Are The Red Barrows? 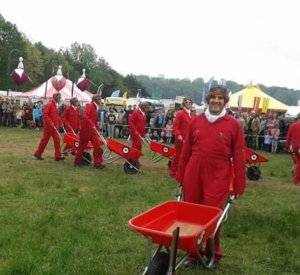 The Red Barrows were first formed by a group of merry men and women in 2009. They have been wowing crowds at every Bearded Theory festival since 2012.

In a nutshell, imagine the Red Arrows, with just as much flair and panache but without the aeroplanes. Instead, these daredevil pilots execute their (Arrows inspired) routines with bright red wheelbarrows. They are no less impressive than the more well established display team. However, you can watch the Red Barrows’ performance without having to crane your neck (unless you have someone tall blocking your view!) The music is fun, ranging  from Motorhead to Johnny Cash to The Village People. The team have even employed professional ballet coaches to make their performance even better than it already was.

What else to expect?

The routines involve skillful, red suited pilots balancing on top of the wheelbarrows, and each other. Much like their counterparts, the Barrows demonstrate immaculately timed patterns as they weave in and out of each other. Not wanting to be outdone by the similarly named group, they also feature pyrotechnics. The coloured smoke emitted from the wheelchairs is a wonderful sight. There is also some circus influence evident as the impressive wheelbarrow pilots race up ramps to launch themselves through a “ring of fire”. These performers are truly fearless!

At the end of the show, the Barrows invite children and sometimes adults to join in the fun. I have seen children been armed with waterpistols and waterballoons, and driven in the wheelbarrows around the arena. Who wouldn’t want to be a Red Barrow?! If you do want to join in for more than a few minutes, The Red Barrows are always seeking new members – prerequisites being that you know your left from your right and love to enjoy yourself. If you are interested, then head over to their website and contact them through that page.

Why Are They So Great For A Festival?

The Red Barrows usually open the festival on the weekend. They perform their awesome stunts in front of the main stage just before the music acts start at 12pm.

This unique exhibition of colour, skill and all round entertainment brings with it a level of fun that is a perfect way to ease yourself into another day at Bearded Theory. 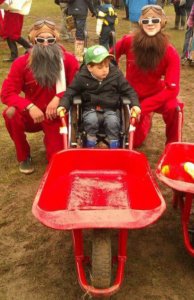 Festival Kidz caught up with Mark from the Red Barrows, who was kind enough to answer some questions that we had for him:-

Did the group come about with the aim of entertaining festival crowds?

We started in 2009 after someone in our village saw a Barrows performance on TV and it seemed like a good idea for our local carnival. After that first performance, word spread and we found ourselves performing at Carnivals and Village Fetes across Derbyshire and then further afield. In 2012 we performed at Bearded Theory for the first time with a performance of the Barrows as well as our Pantomime Horse Trials (lovely Bearded Theory even arranged for our horses to arrive out of the back of a horse box!)

Did you go to festivals before you started performing at them?

Many of our pilots have been to festivals before we started performing at them. The fun, brilliant music and family atmosphere of Bearded Theory particularly attracted us and we have been exceptionally fortunate to have been invited back to perform in front of main stage ever since.

Do you have kids? Do they think the Red Barrows are cool?

Nearly all of us have kids of various ages and three have joined the team over the years with one of them currently performing cartwheels as part of the show. The rest of us are a little worried we will all have to learn how to do this! When we are practising the kids will fill in for missing pilots either with or without barrows.

How often & how long do you train for?

Every year we meet in February to work out how we are going to update the show with new songs and routines. We start practicing from April on Sunday mornings and carry on through the season especially in the lead up to events. We practise on the village green and often find little crowds of passing hikers and walkers stopping to watch – which is useful when we need extra volunteers to practice jumping over.

What is your biggest ambition for the Red Barrows?

We all just want to carry on having fun and seeing the smiles (or custard pies) on the faces of our audiences. We have a secret plan involving 10 mobility scooters, fire extinguishers, ramps and handbags – however there is the small matter of the mobility scooters….

What do the Barrows kids enjoy about Bearded Theory (if they go?)

They definitely enjoy the kids area, all the activities and friendliness of all the volunteers and other kids. The food choices are always brilliant and the music is varied enough to keep the grown ups happy. The fancy dress is fun on the Sunday and the little festival trucks are always a great success with the tired younger members of our troupe.

If you could also elaborate more on the children’s audience participation, that would be really helpful.

Getting the children to bring along a grown up to join in with us on the Sunday mornings has proved to be very popular. We are not sure, but suspect the chance to cover the Barrows with custard pies has been the main reason why this has been so successful and nothing at all to do with covering their grown up with water and generally creating a big mess.

You can find out more about Bearded Theory from our factsheet.

See how much Festival Kidz enjoyed The Red Barrows and the rest of Bearded Theory 2016 in our review of last year’s festival.