For many festival goers Glastonbury is their spiritual home, but for me and my daughter it is Camp Bestival.

It was our second visit to Camp Bestival, set in the amazingly beautiful setting of Lulworth Castle, Dorset. First time was our first festival with our daughter and I was pregnant, this time was very different with the children being of the age where they could immerse themselves in things much more. 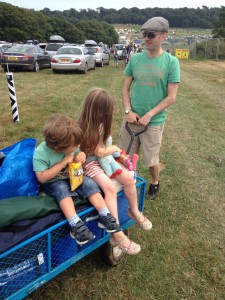 It wasn’t too bad although the nearer we got to the site the more the traffic built up. Once we got to the main site there was a lot of queuing to get in but it seemed to be managed in a fairly organised manner.

Mr Trolley provided us with a trolley to get our gear from the car to the campsite in one journey. The children loved hitching a lift.

There were a range of camping areas, most being dedicated to family camping with a small area for non family camping and forum camping. We were in Boutique Camping with was a short downhill walk from the car park; the folks from Mr Trolley were there which was extremely popular.

Campervan and caravan parking was further away from main camping as was the Camping Plus area where you could pre book your pitch so you had a guarenteed spot. Boutique camping was a smaller area with a number of companies providing facilities. I couldn’t understand why Tangerine Fields were not in the same area and were in the main campsite. 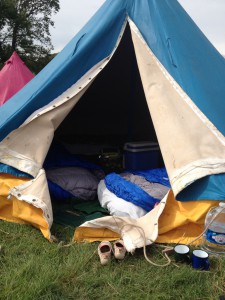 We stayed with Podpads and the crew were friendly and efficient; however I was disappointed with the accommodation as we had booked a Beaupad and it looked completely different to what was pictured on the website. The quality of the beau pads were poor and some looked like they had seen better days as they still had what looked like Glastonbury mud on them! Our tent had been poorly erected and the ground sheet was loose meaning my son got stuck between the main tent and the ground sheet! The guys did come and try and sort it out for us but it leaked on Saturday morning during the rain so I asked to be moved which they did with no hesitation. Our neighbours also had to be moved for the same reason. Having fed back to the company I was assured that these tents would be taken out of service now and they apologised for the inconvience.
We were moved to two podpads for the night which in hindsight I should have booked in the first place. They were very cute and cosy and the children loved them, however they kept falling out of bed as the air beds were quite slippery. 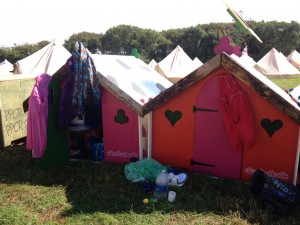 The site was very large and I love the way that you don’t have to line up to walk into a “main arena” and that although there is separate camping fields you can camp as near or as far from the main areas as you chose. 3 years ago we were quite far away and had the “hills of doom” to contend with each day, this year as we were in Boutique camping we avoided those hills and had a fairly easy walk in and out. 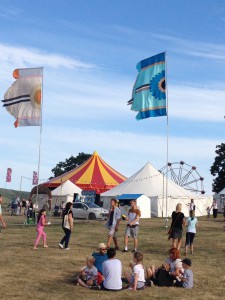 There was a mix of portable chemical toilets and compost toilets across the site. The main comments I heard (and I completely agreed with) were that there were simply not enough toilets and on the first day there was not enough toilet paper or antibacterial gel and I also heard that some children had accidents while queuing which is totally unacceptable. I did see the toilets being cleaned but there were points where they were so full that many children came out gagging. On my previous visit to Camp Bestival I remember the toilets being of a much higher standard.

The compost toilets were very good and they had children’s ones which my daughter bizarrely loved going in. They always had paper and were clean.

In boutique camping there were chemical flushing toilet blocks with decent hand washing, however there were not enough for the size of the site and I felt it unfair that they put the boutique showers over the other side of the site, I didn’t realise there were any until we left.

Showers were provided by Posh Wash across the site and as expected had long queues at premium times.

One thing I really think this festival would benefit from is pot wash areas, being as this is a family festival and most families cook meals back at camp surely there should be areas provided to wash up your cooking utensils? We had to wash ours at the drinking water point in cold water which wasn’t ideal.

This is where Camp Bestival really shines. The entertainment on offer is really second to none, there is something for everyone going on, sometimes so much that it’s rather full on! But there are places to go where it’s quieter, like the dingly dell, the soul park and the Pimms bar but there really is something happening everywhere you look. We loved Big Top Mania who had an excellent range of activities on offer, we spend most of our time here and the kids loved it. We didn’t see a lot of the music on offer but what we did see we enjoyed. Mr Tumble drew a huge crowd and was fantastic, my daughter loved it but my son fell asleep before it so missed it!

There was comedy, the brilliant Blue Coats with their unique form of entertainment, various little bars providing music in their own little space, there was music galore for every taste, the wonderful chill out zone and the skate park for those skateboard crazy kids. 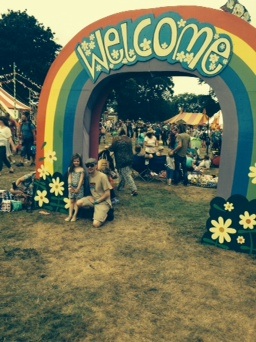 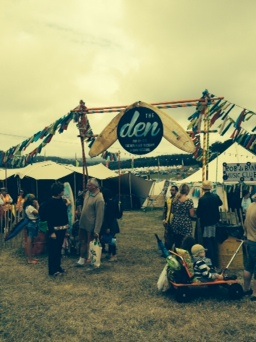 There was a huge range of food on offer for any diet or palate. I LOVED the Feast Collective which was my highlight of the weekend. I always have a rule of eating vegetarian food at festivals so I really enjoyed a Buddha bowl which was full or virtuous goodness and I loved the gigli veggie stall where I enjoyed a mini portion for £3 and for the first time enjoyed the taste of beetroot. I didn’t think the food was too expensive as I would prefer to pay more to get high quality food which I did, every time.
The brilliant WI tent is one of the cheapest places to eat on site and did children’s sandwiches for £1.50, also Pizza and Puppets was a bargain £6 for a margarita and additional 50p per topping.

Beer was £4.50 a pint including 10p for the cup; we mainly drank Bestivale which was brewed especially for the event and was really nice so I didn’t mind paying our for that but not so happy paying that for Tuborg! While I’m on the subject of drinks I do not agree with the 10p for each returned cup scheme. Ok so it may help people clean up but all I experienced was children going round asking if you had finished your drink and collecting at least 20 cups at a time, some might say it’s a bit of fun but I just thought it encouraged children to scavenge and beg and go through bins, with so many other things to do why spend the whole time collecting cups. The design of the cups was beautiful and I would have happily paid £2 for a cup that I could keep rather than seeing kids dive head first into bins or hang round them waiting to be emptied.

A child is never going to get bored at Camp Bestival, there are so many things for every age. There were 3 areas for under 5s, and a specific teen area which looked fantastic.

Big Top Mania ran the Upper Kids field and had two tents offering workshops on circus skills, and creative workshops. There was a toddler area partly under cover which Evan spent a great deal of time in. Eila entered herself into a talent contest by doing cartwheels and loved watching older children doing a trapeze workshop. This was one area we kept coming back to each day, big thumbs up all round.

Art town looked brilliant with a huge tent full of creative activities for all ages, I loved seeing from tots to teens all painting the giant “ART TOWN” letters, it was constantly busy in here and all the children were fully engaged in what they were doing.

Also in the Lower Kids field was the Duplo and Lego stands, Disney Planes 2, under 5s soft play, a giant sand pit and fairground rides. The fairground rides were rather expensive in my opinion, £2 a go on the Helter Skelter and £2.50 a go on the carousel, the big wheel at the bottom of the Castle Field was £2.50 per person and they had a no lone riders rule, this made things a little bit expensive, and I’m sure I’m not alone in this. Eila kept going on about going on them and although we had allocated money for this I felt their presence distracted her from the many other wonderful things going on.

In the Dingly Dell the National Trust and Project Wild Thing had loads going on, I briefly walked through to have a peek and planned to take both children the next day but we never got round to it.

On the whole what was on offer was amazing, in fact I probably haven’t covered it all because I didn’t get to see it all!

I was really looking foward to dropping for a rave with my glow sticks with Big Fish Little Fish but my two year old wasnt keen (the five year old was having a nap back at camp) but it sounded BRILLIANT! I do hope I get the opportnity to attend one of their events again.

I met a young lady called Grace McLaughlin, 11, in the Podpads drinks hub,  who was very excited about what Camp Bestival had to offer. She was doing daily short sets  for  Comedy Club 4 Kids and was telling me how she was considering reviewing Camp Bestival for her blog, Ive never met an 11 year old so beyond her years and I really hope she had a great time. 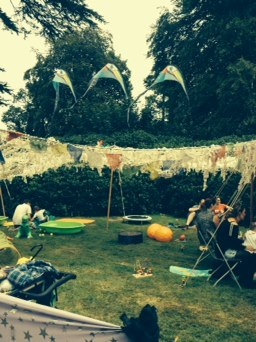 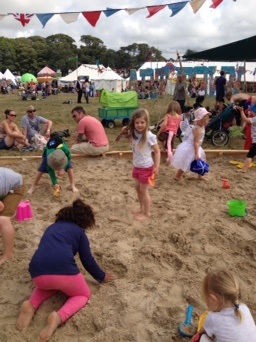 Would I go back again?

I have mixed feelings about Camp Bestival. As a festival it has an amazingly friendly and welcoming atmosphere and really has a festival vibe, the venue is perfect and the entertainment on offer is second to none, the children’s entertainment is excellent and there is more than enough for the grown ups to enjoy.

However I did find it expensive, the toilet situation wasn’t great, and I also wasn’t keen on the increase of commercial advertising such as BMW, Arsenal, Joules and Bear. It felt like it was a county show and I don’t feel they have a place at an event like this, although I do appreciate the difficulty covering the costs of the festival.

On the whole though, what a place! I’m still smiling when I think back to the sun soaked grounds of Castle Lulworth. Rob and Josie Da Bank and their team have put all their years of festivalling experience into this and it shows. A few things do need addressing but they do listen to the festival goers so I am sure they will take opinions on board.

One thought on “Camp Bestival 2014 Review”