It’s been said that Latitude is “more than just a music festival” and we can certainly vouch for that.

Latitude is no stranger to us but there was something different about this year… most notably the sun was shining!

We arrived in our campervan Thursday at around two o’clock and were surprised to see no queues.  We had planned to get there as early as we could knowing how far away from the festival site the family campervan field is.

Once set up, we went into the festival arena and all of the familiar sights and sounds of Latitude became quickly recognisable, minus the mud of course!

We headed to the i Arena to catch a bit of Mary Anne Hobbs and Craig Charles. As there is a limited amount of entertainment available on Thursday evening the woods quickly filled with crowds of revellers and so it was off to bed for us.

Friday was going to be hot hot hot and we were raring to go. First up for us was to head to the Obelisk Stage to meet up with the lovely Lucy who had been in touch with us on Wednesday following a request from @BBCRadio6 via Twitter. They were looking for kids who were going to be at Latitude to choose their Good Day Bad Day tunes and we were off to record the feature with Steve Lamacq for his show to be aired later that day. It turns out that 5 year old Boo was the youngest guest they have ever had on the show. 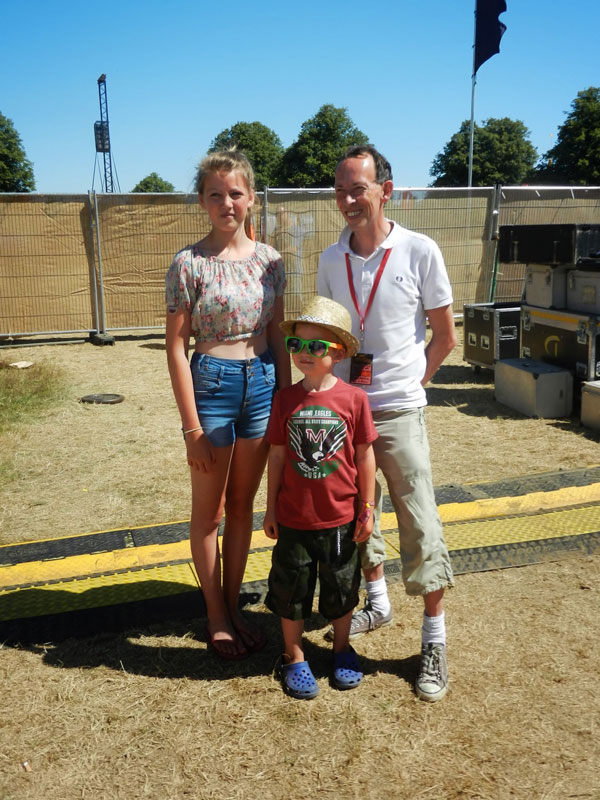 Interview done and it was time to discover the Children’s Arena.  We had been to Latitude before, and I had been given the opportunity to interview Sharon Reuben (Curator of Latitude Children’s Arena) for our Latitude Factsheet, so the kids knew exactly where we were headed and what they wanted to do.

First up a visit to Suffolk Recycling Group where Boo remembered making a boat the year before. A lovely touch for us was that when we turned up the lovely folk had remembered Boo’s name. One funky rocket badge made and proudly donned and it was time to move on. 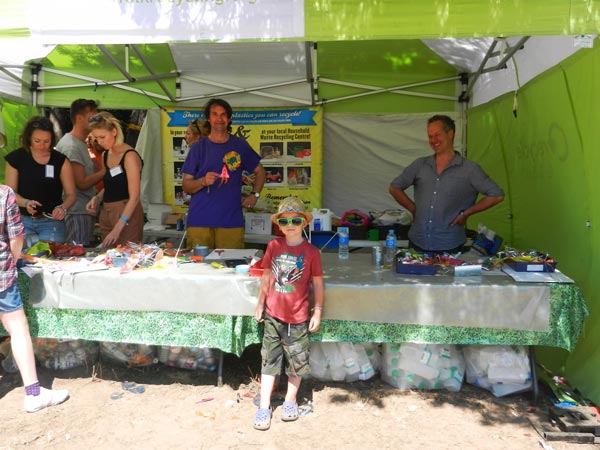 Next up a visit to The Inbetweeners Area and CULTURE WORKS. Emily and I had been really interested to learn more about the opportunity Culture Works were giving 12-17 year olds and we had spoken to them prior to our arrival to find out more. Culture Works East were working in partnership with Latitude so that they could be the first UK festival to become an Arts Award Supporter organisation and were going to be helping young people at the festival to achieve elements of their Arts Award qualification through providing the opportunity to take part in numerous on site arts activities. Emily spoke to Emily from Norfolk and Norwich Festival Bridge to discuss what sort of activities were on offer and for the next two days got to work discovering all the delights of Latitude. 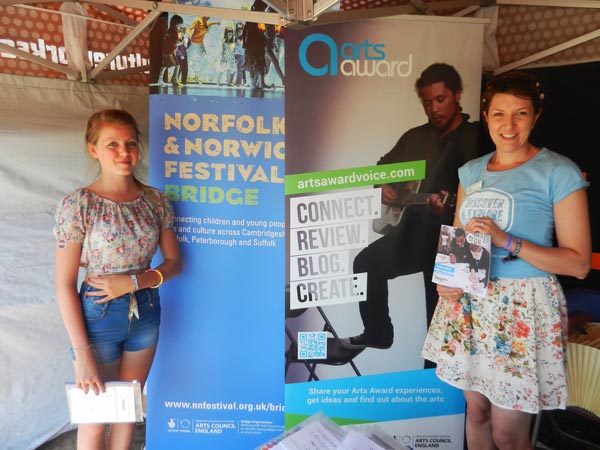 Boo’s turn again to choose and it was off to see our friends in Angel Gardens and time to make a lantern. Temperatures were rising and the chance to sit in the shade of one of Angel Gardens bell tents for half hour was most welcome. Angel Dan sat with Boo helping with the tricky bits and ta-da we were on our way with Boo’s creation and big smiles. 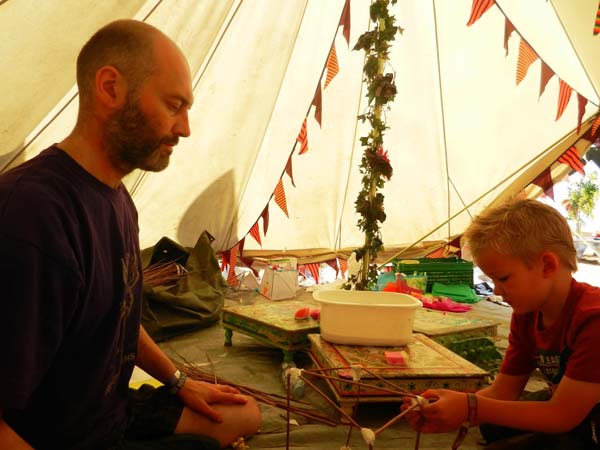 Something for me now, so we were off to the BBC RADIO 6 MUSIC STAGE for some John Grant, always a highlight for me.

TIP:  Having asked other families for their feedback, one point that was raised on more than one occasion is that the Obelisk Arena and BBC RADIO 6 MUSIC STAGE are a fair trek from the Children’s Arena so you will need to leave plenty of time to get there.

As far as the weather goes, Friday was the hottest day at Latitude and (putting it mildly) we were extremely disappointed when a couple of bottles of squash that we were taking in for the kids were confiscated at the entrance. We saw this happening to lots of other families and although I could completely understand that if we had been walking in with a crate of beer or glass bottles this would not have been acceptable, I do however feel discretion on the part of the organisers would have been more in keeping with the family friendly vibe that we have previously experienced at Latitude.

Saturday and I woke to the familiar sound of rain drops on canvas. After the last two years at Latitude it seemed we were not about to escape! Thankfully it was only a few light showers and nothing more. Today was going to be all about the music and I kicked off the day listening to and enjoying Gaz Coombes. The heat of the day before, all the activities and walking meant that I was happy to kick back at the BBC RADIO 6 MUSIC STAGE and listen to some music. The rest of our party flitted between stages and reports of enjoying an array of different acts were exchanged. Richard Ashcroft as usual blew me away, and I was then looking forward to listening to Alt-J with Emily. Unfortunately it seemed that everyone else at Latitude had the same idea as ten minutes before they were due on I felt that I needed to get out of the tent as it was getting too overcrowded for me! We did get to listen from outside the tent but looking over to the Obelisk Stage I did wonder if maybe the headliners and stages could have been swapped!

Sunday and it was back to the Children’s Arena. A visit to Culture Works to hand in Emily’s project and I am proud to announce that Emily gained her Discover Arts Award at Latitude and looks forward to receiving it in the post. So if there was ever any doubt that festivals are educational that’s just one more way to prove our point… they are!  You can read more here:– Can you justify taking children out of school to attend a festival?

Next Boo wanted his face painted, so after a visit to the incredibly talented Faceinations team we had one very happy Camo Tiger and Emily was looking very pretty too. Then onto visit some Mini Monsters at The Creepy Crawly Roadshow. On show was  Salsa the Sinolean Milk Snake.  Watching Boo and the other extremely attentive audience members listen to Kate was truly magical and I couldn’t help feeling that this was mostly due to Kate but also partly due to our beautiful surroundings at Henham Park. 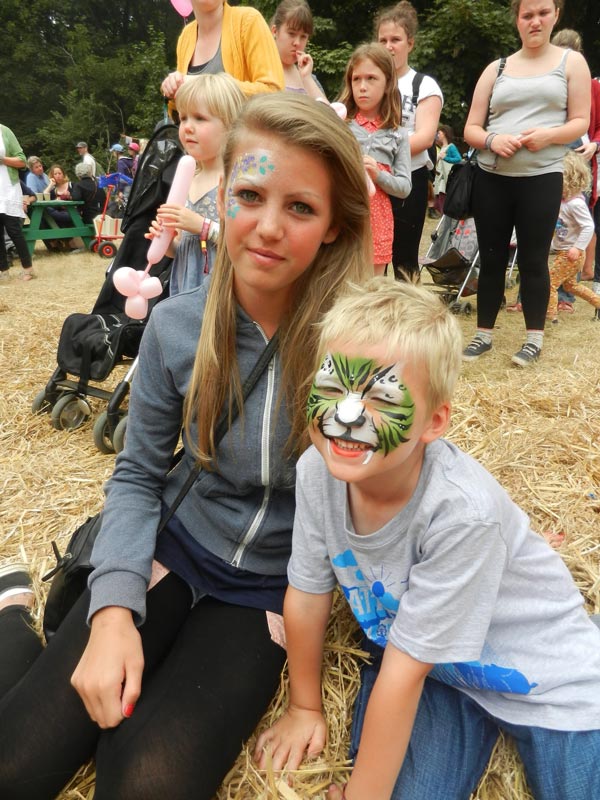 Noisy Toys next and there was certainly lots of fun to be had experimenting with sound, electronics, vibrations and amplification, and lets face it who doesn’t love banging out a tune on the drums, even if you can’t play!

We could have spent all weekend in the Children’s Arena as there is so much on offer and I still think we wouldn’t have covered it all! There is something for everyone, little kids and big kids, whatever your age you are guaranteed to have the time of your life! 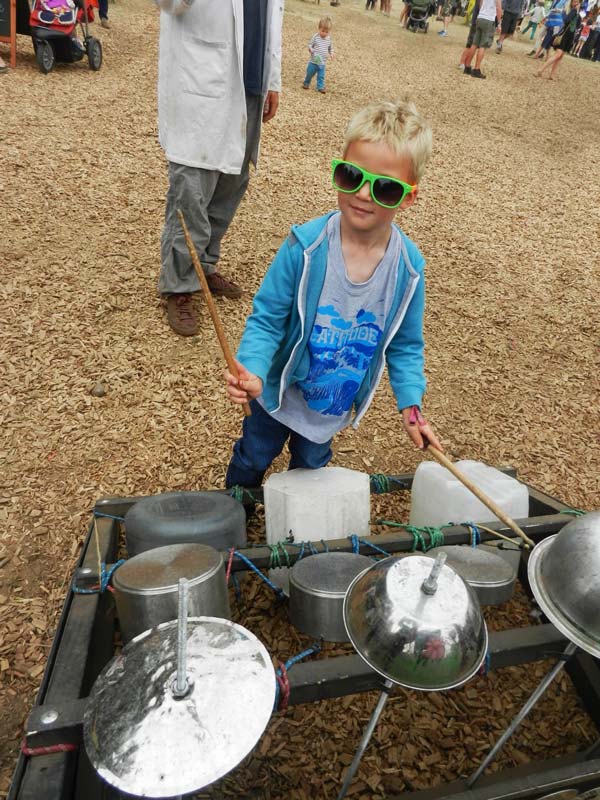 Time to head up the hill again and settle into some Sunday afternoon sunshine at the Obelisk Stage. James Blake was very pleasant listening and we were working up to what we knew would be one of our highlights of our weekend seeing Rudimental at Latitude. Unfortunately once again we were not able to get into the BBC RADIO 6 MUSIC STAGE but nevertheless hearing them followed by Disclosure and we were all on cloud nine.

I would like to take this opportunity to wish Jessica from the Festival Kidz team a speedy recovery as unfortunately after taking a tumble, Jessica and her family had to leave the festival early due to her injuries. A special mention must go to the BeWILDerwood team who helped Jessica out after her fall. Unfortunately Jessica was not offered any help elsewhere when it came to the struggle of packing up and leaving site, help which I am sure would have been very much welcomed!

While we were at Latitude we took the opportunity to speak to other families and ask them for the feedback. The repeated points raised seemed to be that although toilets were kept clean and well stocked there were just not enough and at certain times queues were, although fast moving, still much too long! Other comments made were that the food outlets didn’t offer a wide enough selection when it came to healthy options, and it would be great to see more offer child size portions so that costs could be kept down.

A lot of families we spoke to in the family campervan area were completely shocked to realise that we had no toilets at all and that the nearest were so far away. We were also taken aback and hugely disappointed that this issue had not been addressed especially after my husband had written to Latitude after 2012 requesting that toilets were added to his Christmas list for Latitude 2013 (he was obviously on Santa’s naughty list!).  We really do feel that this issue needs to be sorted and know that we are not alone in this.

Overall, we had an amazing time at Latitude 2013 but we would ask that it keeps true to itself and doesn’t end up being just another corporate festival.

At Latitude there is so much to do and see – the only trouble you will have is how to fit it all in.

For more photos, check out our Facebook Latitude 2013 album