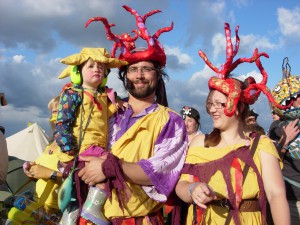 Shambala deservedly won Festival of the Year in our awards last year. Could they deliver another award winning performance?

The answer as far as our family goes is – yes!

Another truly wonderful weekend from the festival that keeps on getting better and better!

The best things for families are

There are so many amazing things about Shambala 2014 that I have decided to write about the new additions. If you want to read more about the festival read my review from last year too.

New for this year 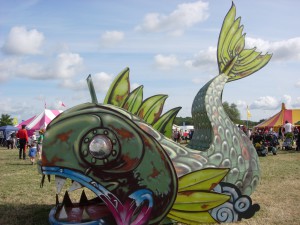 Shambala is not a festival that rests on its laurels. This was our third one and each year the organisers listen to the feedback and make changes and additions.

Most notably this year were the information stands. They had several of these across the site, providing directions, and information. Because they were always manned they also provided a general sense of security.

We were camped close to the one in the family field and we picked up some recycling bags from there. They were also giving out containers for food waste which is an initiative I haven’t seen at any other festival. They were always friendly and helpful, and made the camping area feel very safe. 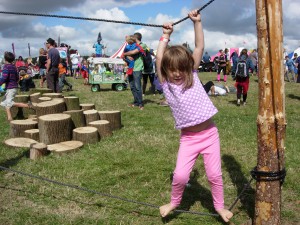 As well as all the wonderful workshops the kids’ field had added climbing walkways and a huge water play area.

This did mean we spent far more time in there, but this was no bad thing. The workshops were superb. We spent a couple of hours decorating fabric owls which made lovely souvenirs.

There is one manned entrance to the kids’ field. Which, for us as a large family, meant we didn’t have to worry so much about losing the little ones. When, inevitably, one of the four year olds wandered off I found her very quickly. She was being looked after by the steward at the entrance.

The woods contained more for children too. They always open dramatically on Friday evening. We joined the crowds heading through to find all sorts of magical lights and sculptures.

They had a lit screen for shadow puppets and musical instruments in amongst the trees, which were a joy for children and adults alike.

During the day, a huge interactive fox hunt game went on. You started the game as a hunter, and when you caught enough foxes (stole their tails) you progressed to be a hound. The foxes had to steal chickens and sausages from the farmers. The game was played in among the trees to the screaming delight of all the children.

To attempt a large immersive game such as this was certainly ambitious. It worked so well that our seven year old disappeared for about two hours, and was talking about it nonstop for weeks.

There was another whole new area in the woods just for children. With cargo nets to climb strung across the trees, and outdoor skills workshops such as fire making and den building. This was a wonderful addition to the festival. 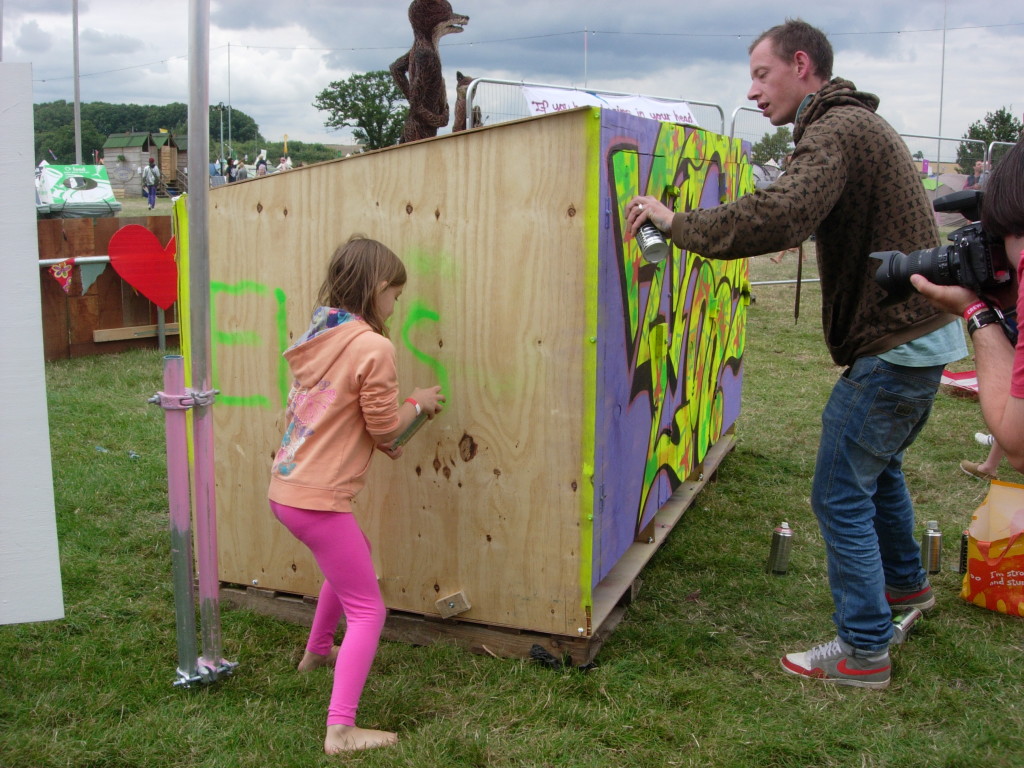 There were only two complaints I have this year. The main one being the queue to get in as there seemed to be problems around the entrance gates. Some families we spoke to had to queue as long as 2 hours.

Our advice is not to unload your stuff but go straight into the queue, get your wristbands and then go back to get everything.

The other complaint was the fact there were no adult toilets in the children’s field! The parents need to be able to use the toilets too.

We were forced to either use the children’s toilets (not such a bad thing!) or leave the field altogether. A problem when you have a number children, as we do. I only hope this was an oversight from the organisers.

Apart from this, the number and quality of the toilets across the site was exceptional. We never had to queue longer than a few minutes and they were nearly always clean. The benefit of proper compost loos being that they don’t smell too bad either.

As well as the main stage, there was a new reggae roots area, and so many small and hidden venues that I lost count. Some venues would only open at night and some were only open in the day.

We went to one of the children’s shows in the seated playhouse. The queue was so long we thought we wouldn’t get in. But there were so many seats we could have showed up on time and still got in.

This was true across the site. Although this is one of the larger festivals we attend (about 12,000 people this year) there were so many venues and so much space that it rarely felt crowded. 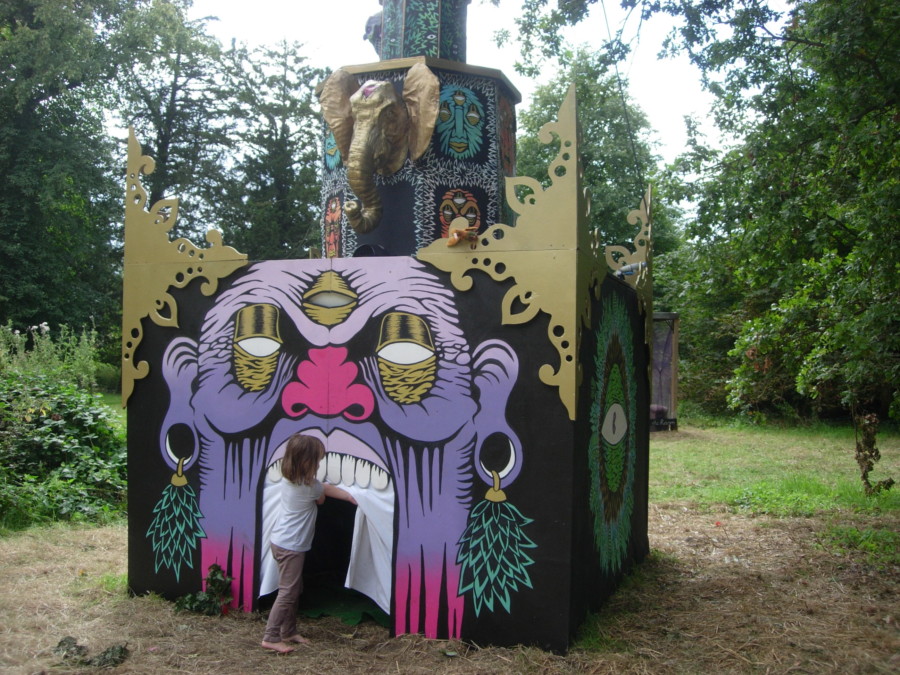 The walkabouts and artwork

By far my favourite part of the festival is all the wandering performers, and special artwork that changes every year.

This year there was a huge mechanical fire breathing dragon, controlled by button boxes. The children were simply awestruck by this (as was I!). There were large artworks in the woods that you could climb into, houses full of lights, and a giant kaleidoscope.

It’s telling that the Shambala 2014 programme is catalogue-thick. There’s so much going on – a healing area, amazing puppet shows, a theatre, a cinema full of sofas… there’s just so much to do here that it’s impossible to get round it all.

But what really makes Shambala special is the people who go. Everyone dresses up, everyone participates, and everyone is incredibly friendly.

Participation is encouraged. There are flash mobs, dance workshops and crazy games for the outgoing among us. But there are also intellectual debates, healing and craft workshops and other gentler activities for the more reserved.

I really can’t recommend this festival enough. If you haven’t been before then buy your tickets for next year now. I can guarantee it will sell out early! 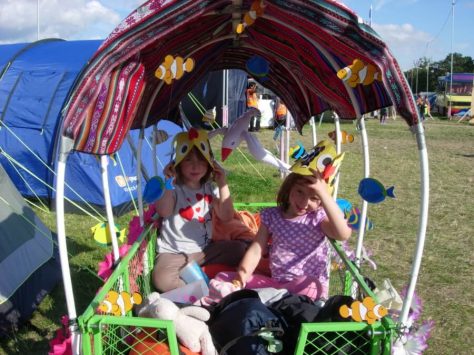 My girls in their aquarium 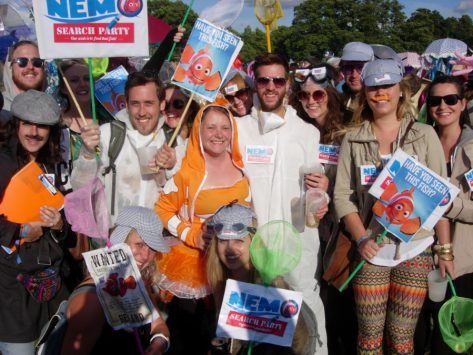 Nemo! We found you!

So many people dress up at Shambala that you might feel a bit left out if you don’t.

The theme this year was The Seas of Shambala. An excellent theme which allowed people’s imagination room to run wild. We went as fish, with our wagon decorated as an aquarium with the twins as fish inside it.

I was a clown fish, and when I bumped into the ‘Finding Nemo Search Party’ I ran over to them and said “I heard you were looking for me?” and received hugs from all of them – “we found you!”. Although I was also constantly pecked by another group of people dressed as seagulls shrieking “Mine! Mine!”

We saw sea monsters, people on rafts, boats, a packet of fish fingers, fishermen carrying mermaids. The effort that went into the costumes was truly astounding. 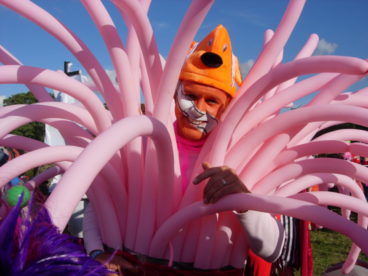 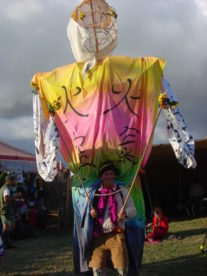 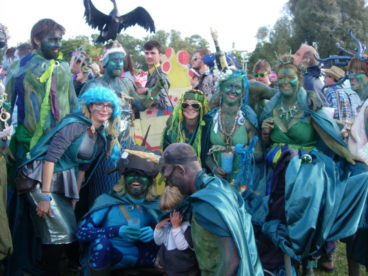 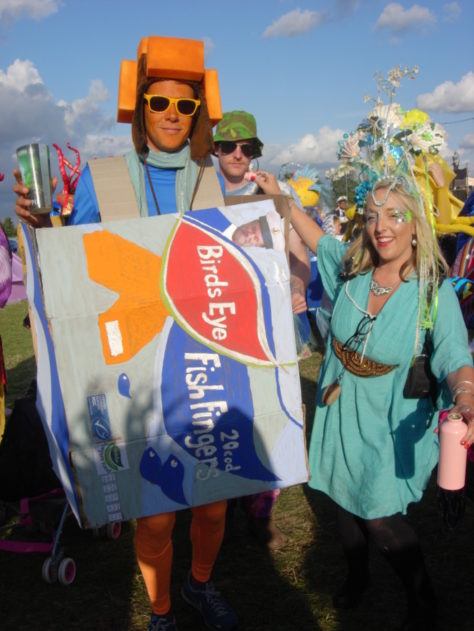 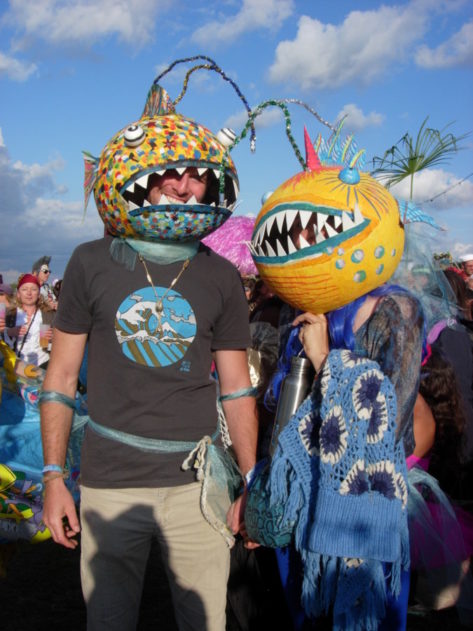 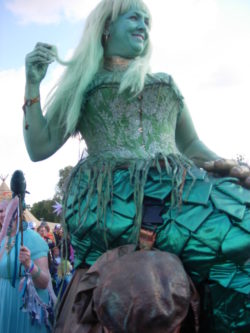 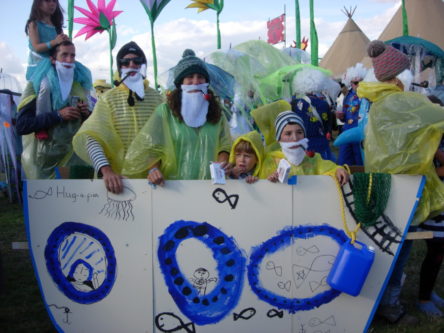 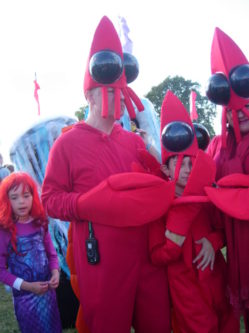 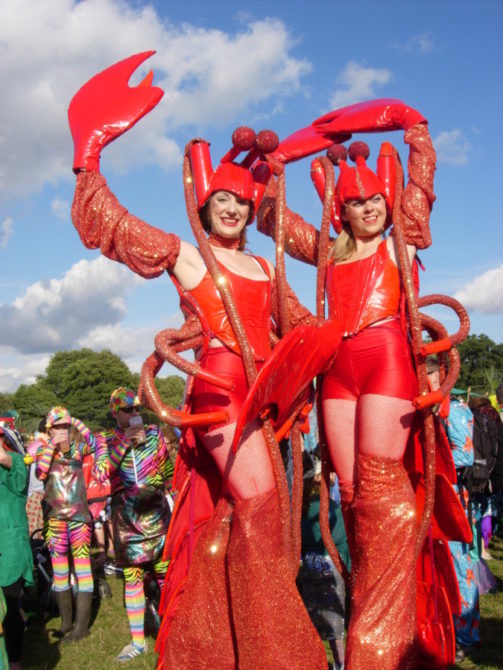 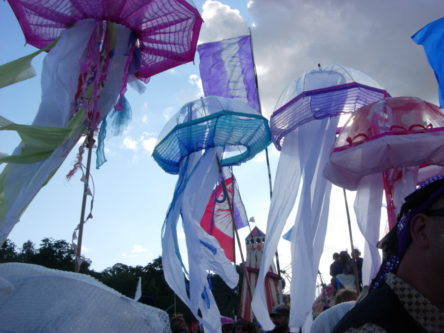 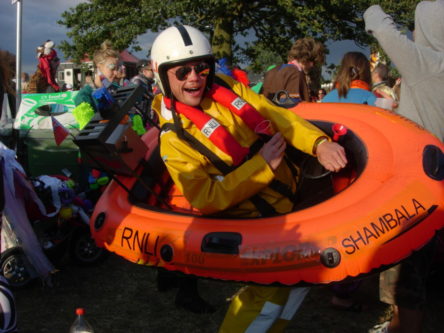 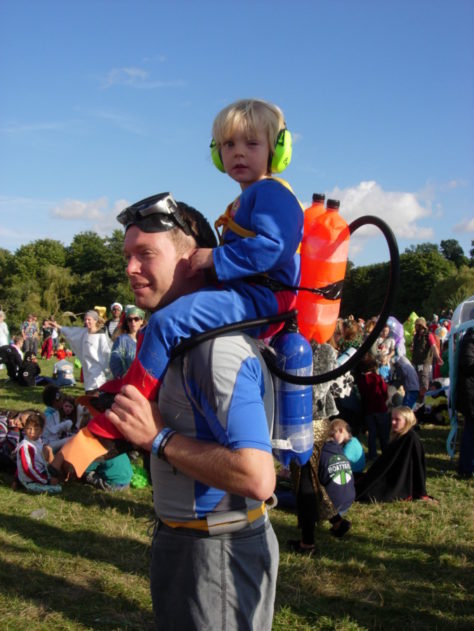 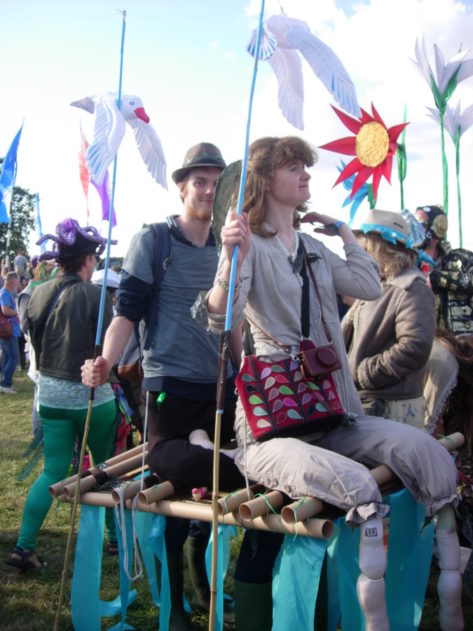 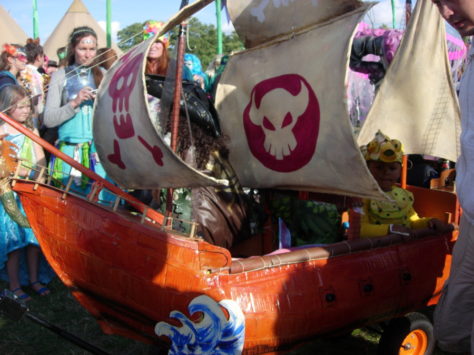 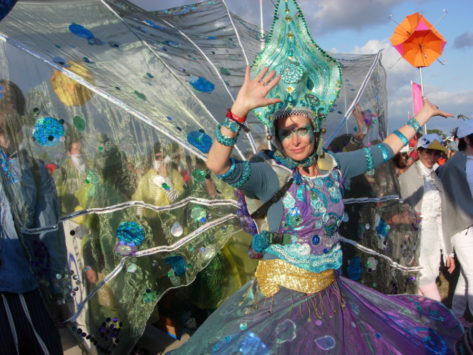 See our Shambala Festival factsheet for more information about the festival.