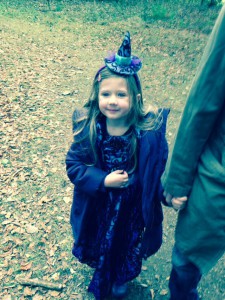 hen the heady days of summer festivals are over for the year I always look forward to the truly magical event that is the real halloween.

From the creators of the annual Fairy Fair, The Fairyland trust, created the real Halloween  in 2010. The main aim to teach the real meaning of Halloween not the plastic horror show we are so commonly exposed to in this day in age.

I for one have never been a fan of the garish, cheap costumes on sale, the idea of trick or treating or even buying a pumpkin just to carve it and not use it as the delicious versatile vegetable it is. So this event is right up my street in keeping with my personal beliefs.

This year we had relatively mild weather, so being outside in the grounds of Holt Hall, Norfolk wasn’t too chilly. As always the atmosphere was pure magic without being contrived, for me this is what makes the Fairyland Trust so special, I love that it’s so grassroots.

On the way into the main site, walking through the trees we were greeted by the joyful sounds of Pennyless, I love how they set the mood of things to come. Once in we found the lovely Abbie Panks for a catch up and then made our way to the woods for the Witch Training workshop. 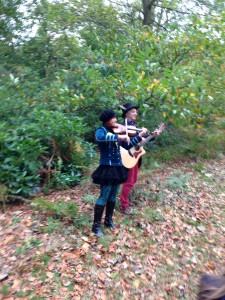 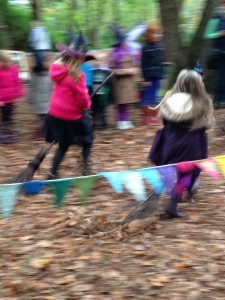 New for this year, the workshop consisted of very important witch skills such as riding a broom, putting a bell on your cat, and mixing potions. It was a very active workshop so good if you have wriggly little ones who like to move around. While I watched EIla participate in the workshop, my husband played among the trees with Evan. This is what I love about the Fairyland Trust events, the venue gives you the opportunity to create your own entertainment and magic and dip in and out of the more structured activities as you please. 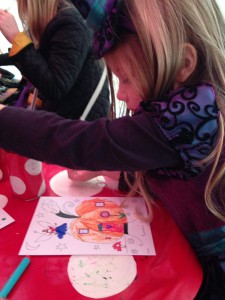 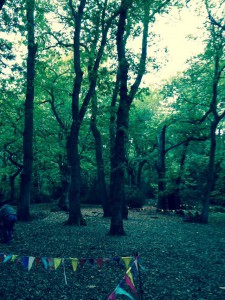 As usual the majority of the workshops were for pre booking and cost from around £3-4. I would always recommend not booking too many workshops for your little ones because it can feel like you are rushing from one to the other and not taking in the other sites. We usually book one workshop and always make a visit to the Pixie Post Office, which Evan enjoys now he is older. 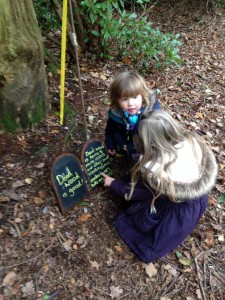 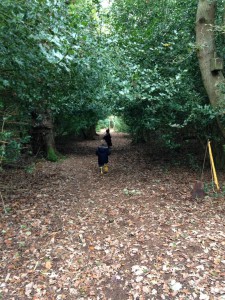 We also always do the rainbow trail and the children love looking out for the little fairy doors and finding out about the different trees in the woods. As usual we didn’t fit everything in, this is why I would love to see a weekend ticket on offer, I have met many families who have arranged holidays around the event so they can come for the two days and do different things.

Around the site were craft stalls which sold some beautiful items, at one stall Eila announced to the trader that she would like to buy everything on it as she loved it so much, what a compliment!

Food stalls included the Proper Pizza co, the Flying chef to name a view. the Good Elf was back with reasonably priced real ale, cider and mulled Apple Juice, and the cafe sold a range of delicious cakes. 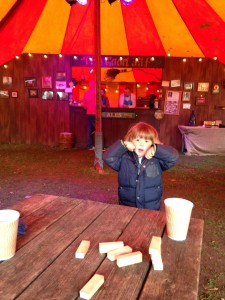 Toilets as always were immaculate and there were quite a few men’s urinals. However they could do with sign posting as there were a number of men queuing up because they didn’t know they were there!

Back for The Real Halloween was the Fairy Photo Booth, you dress up and stand in front of a woodland backdrop and have a digital photo taken for £5 or an instant for £3. This is a fantastic idea and such a lovely momento from our day.

At the end of the fair there was a light parade around the site, we missed this due to Evan being so exhausted he was starting to get grumpy, next year we will go a bit later in the day instead of when it opens so we don’t miss this part which according to Abbie was pretty special. We did make a lantern though, this was a drop in workshop costing £2, it was very popular and busy and could have done with a few more Crew to help or set sessions to come in to ease this.

The Real Halloween will remain our end of season autumnal treat every year. Evan is now getting to the age where he is really starting to enjoy himself and be able to participate more in the activities on offer.

I feel so incredibly grateful that we have such a wonderful Halloween event in Norfolk, people come far and wide to attend (a family came from Norway!) The Fairyland Trust are very successful in creating magic in nature and keeping it real. 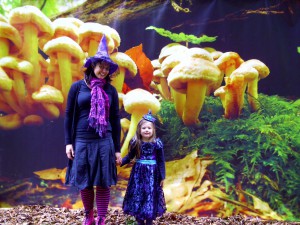