After a weekend at Wychwood Festival, my son ran through the school door telling his teacher and friends all about dragons, staying up late, making friends, eating crumpets, dancing to music, seeing Mr Bloom, bubbles and bouncy castles. So if you asked him if he enjoyed it, I would say it was a big YES.  But from a parent’s perspective, it wasn’t all plain sailing.

We arrived late afternoon Friday and there where no queues to get in and the festival was very well sign posted. We had noticed before from reading information on the festival that we could drive on to site, drop the kit off then take the car back to the car park. When arriving we were advised this is not the case and would need to walk to the site. We asked for directions to the family camping and were told very vaguely which direction to take. This soon became a big problem when loaded up with kit, as it became apparent there were no signposts and no stewards in sight to ask for guidance.

We eventually found the camping with some help from some other lovely campers, who told us they had been allowed to drive onto the site to unload (but were stuck in queues for several hours so with hindsight maybe the walk in was for the best after all!). Other feedback campers gave me regarding the arrival problems they experienced involved the fact you were given a 15 minute window to unload then had to take your car back. If you are a lone parent, how would this work?! Do you leave all your kit whilst you get stuck in a hour queue parking the car then have to walk back with the children? I think the whole system needs looking at and the staff need to have more of an idea about the system. 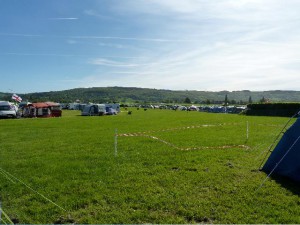 The Family Camping area at Wychwood was great. Lots and lots of space, and my son loved having the freedom to play with the other children in this area.  The horse jumps became a regular meeting point for all ages to play. My son would’ve actually loved to have spent the weekend just playing there!  The family camping area was the furthest area from the arena (and the furthest away from the main flushing loos) but there were plenty of toilet cabins on the campsite and all that I visited were in a great state.  There were showers (again away from the family camping) and all appeared very looked after. 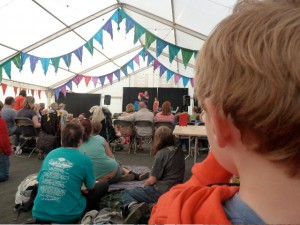 I felt there was lack of organization throughout the weekend. This started on arrival with nobody seeming to even know where the camping was, through to the children’s area opening at random times with very little idea as to when any performances were on.  As said before, my son had no idea of any of these issues and he had a great time.  The problems with the lack of organization had no bearing on his enjoyment, but for me it was a little frustrating and made it difficult to plan our days.

That said, the Circus Tent had plenty going on and the Fire Show on the Friday night was a real highlight. The Children’s Literature Tent was lovely and spellbinding to all those listening to wonderful stories. My son loved Snot the Dragon on the Saturday afternoon.  He got a poster at the end and is still carrying it around in his pocket telling anyone who will listen about Snot! 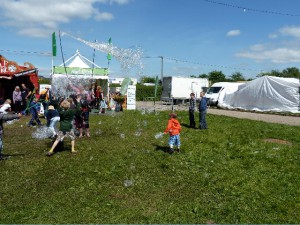 The bubble shop, Bubble Inc, was a great hit – lovely to see all those children running around laughing whilst trying to catch hundreds of bubbles. There was a bouncy slide and castle (roughly £2 for a few goes) in one corner of the arena and some sort of paint-balling activity for older children. The lovely Rose from New Forest Nappy was on site to loan pre-folded cotton nappies and had a lovely feeding and changing area for the smaller festival goers. I just wished the entertainment for children could have started earlier and stayed open later and we that had been given clearer indication as to when things where happening so we didn’t miss out.

Plenty to choose from to eat – the Higgidy Pies were lovely and really filling. Lots of choice for picky eaters.  My son loved the crumpets and cheese on toast.  The wedges also went down well for a mid morning snack. We took everything needed to cook our own breakfasts but there was plenty of choice if you prefer not to carry the cooking kit. 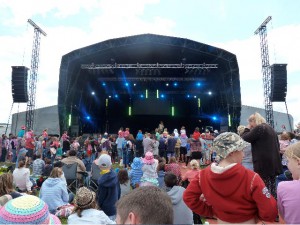 I have never been to a festival where so many camping chairs and blankets took over the area so much in front of the stage, it was a sea of camping chairs but we climbed through them to get standing space to see The Wedding Present.  They played on the Saturday evening as Kate Nash had cancelled and the running order was slightly changed. The Wedding Present are a family favourite here and they did not disappoint, they made the weekend for us all. The Human League put on a great show and had the crowd singing and dancing the night away.

Sunday morning was time to watch Mr Bloom, with lots of children up early to see the cBeebies star – So many dads with children on their shoulders pushing to get a look at the famous gardener singing about vegetables!

Wychwood is a good small festival overall, despite the organisational niggles. Many people we spoke to had come back year after year. It felt safe and secure and the setting of the Racecourse is easy to navigate. I would go again and would recommend to others to go – but as I live locally, I might opt for day tickets rather than go through the camping hassles again!

Wychwood is held on Cheltenham Racecourse.
For more information about the festival visit our Wychwood Factsheet.

One thought on “Wychwood 2013 Review”