junk4funk makes Musical Instruments out of rubbish such as pizza boxes and plastic bottles.  junk4funk runs workshops in schools and festivals across the country, and would love to be involved in more. 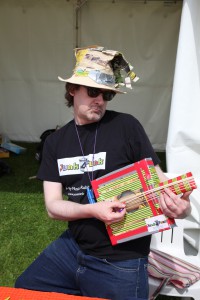 I had the opportunity to interview the owner/director, who wishes to bring his mix of craft, music and recycling to more music festivals.

How did you come up with the idea of

I had been facilitating African drumming workshops up and down the country for around 7 years, when, in March 2007, I came up with the idea of junk4funk. I knew that environmental education would become an increasing part of the curriculum, so I thought maybe I could combine my musical knowledge (professional musician/music teacher for more than 35 years) with the idea of turning waste materials into musical instruments. Hence….junk4funk was born!

What is unique about your workshops?

Certainly in March 2007, not too many people were making guitars (with 3 notes!) from cereal packets. These guitars can even be played through an amplifier!  The real beauty of junk4funk is that they can be made by an attentive 7 year-old in around 1 hour.

I’d like to add that ALL of junk4funk’s travel….from Inverness to Ipswich, Belfast to Birmingham, Poole to Peterborough….is by Public Transport.

Since September 1998, I have facilitated more than 1,600 Music Workshops this way! (Next month…junk4funk workshops in Northampton, Birmingham, London, Felixstowe and Harrogate!)

Describe what your workshops offer

Workshops differ depending on age/experience of the participants. The older the students, the more likely junk4funk will include an element of amplification.  With very young children we make “Samba Shakers” together and use rhyme and chant to explore specific “world rhythms”. 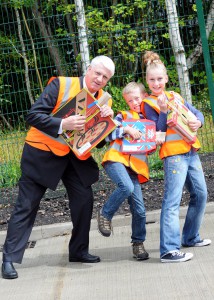 Which festivals have you attended or worked at, and do you have a favourite?

junk4funk has worked at Big Session, Summer Sundae, Wychwood, Leicester Riverside, Nottingham Riverside, Splendour and can I give a special “thank you” to Joe Gibbs at Belladrum Tartan Heart who has been a great supporter of junk4funk for several years.

What is your favourite thing about music festivals, and why do you feel they are important for children?

Variety of experience on offer…Atmosphere of people enjoying themselves…Festivals are a very healthy experience for children in both the mental and physical sense – it’s better for mind and body than sitting in from of a screen all day long!

Go to www.junk4funk.co.uk for further details.