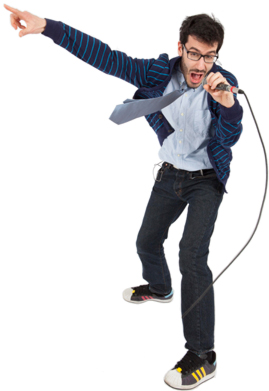 Last summer, Emma caught Shlomo‘s set at Larmer Tree Festival and was absolutely blown away!  She raved about him so much that when we heard he was touring the festival circuit with his all-new show: Shlomo’s Beatbox Adventure for Kids, we just had to get in touch!  The kids got really excited and wanted to know all about how he came to be such an awesome Beatboxer so they interrogated the poor boy…

Kidz: “You’re playing a lot of big festivals this summer.  Do you get really nervous when you perform to huge crowds?”
Shlomo: “Sometimes, but I like to think of it as excitement rather than nerves, and let the adrenaline give me an energy boost.”

When did you start beatboxing?  And how did you discover you could do it?!
“I grew up in a very musical family and got my first drum kit aged 8 years old.  But I wasn’t allowed to practise my drums after 6pm, so I instinctively started making noises with my mouth. I didn’t know it was called beatboxing until much later!”

Did your parents encourage your beatboxing career?
“At first they were unsure but when I started getting on the radio and on TV they were really supportive. My mum even managed me for about 4 years!”

What one piece of advice would you give to kids who want to be musicians?
“Try to put your own spin on anything you do. It’s fine to imitate and learn from others, but if you can flip it round and do it in a new way, it immediately becomes your own.”

Who are your current favourite artists and bands?
“If you’re interested in beatboxing, check out Reeps One or The Boxettes. My favourite artist of all time is Stevie Wonder.”

Have you ever had an embarrassing performance moment?
“Err… well… here’s a video of me falling off the stage…

Shlomo, barely missing a beat while falling off a stage!!
www.shlo.co.uk/2011/02/video-blog-beatbox-fail

… and also once my equipment tripped out the power in the middle of my set at Glastonbury. I had to keep 10,000 people singing and dancing without a mic for about 15 minutes until it came back on again. They were so happy when it did, I was actually grateful for it!”

Do you have kids, and if so, do they think you’re really cool?!
“My 2 year old is always demanding I beatbox while he has a ‘Bath Disco’ at bathtime. Too much fun!”

Are festivals good places for kids to be?  Did you go to any as a kid?
“I didn’t go any as a kid, but my son LOVES festivals. The kids get to be free and enjoy themselves in a safe environment.”