I’ve bumped in to a number of the Twiggle Team over the course of the summer as they were out on tour with their marquee of wonder at various events. They were a godsend at Latitude in family camping where we spent every morning before going into the main arena and were extremely supportive of me and my family when I injured my knee in their marquee on the last day of the festival. They also made Eila’s day at North Norfolk Food Festival as she thought she was back at Latitude!

We were invited to join in with the spooky Halloween half term events at Bewilderwood adventure park, in Hoveton, Norfolk. I had heard that this week long events each day ending with a lantern parade around the woods was rather special so we were keen to join in. We chose a day where it was forecast to be fine, it did rain a bit when we were there but being deep in the woods we were pretty well sheltered.

As the lantern parade was due to start just before 5pm we decided to get to the park for around 1pm so that the children would be able to enjoy it. As it happened they were so exhausted and hungry we ended up leaving just before the parade started so that we could give them some tea before they crashed. Bewilderwood is an outdoor adventure park full of zip wires, climbing frames and slides.Most areas are designed for children 4 and above although there are Toddle Wood areas for the under 5s. 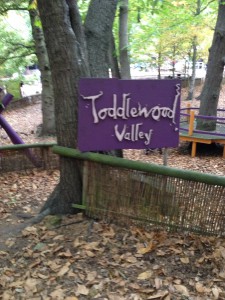 Now I need to address a matter that bothered me considerably, this is in no way the fault of Bewilderwood at all who do emphasise that children should be supervised at all times but sadly this was not the case for many visitors. Eila and a few other young children nearly got knocked off a piece of equipment by older children who barged their way through it, unsupervised. There were children who were clearly over 5 in the toddle wood area, unsupervised climbing up the slides that were designed for much younger children. Evan was unable to get down a slide due to bigger kids messing around in these areas completely unsupervised. It does sadden me that there are many parents and carers who can’t be bothered to supervise their children or even show them how to respect other children on the equipment. Not only that but if their child was injured they would soon be complaining. I don’t like to complain or rant but I do feel it’s important to point this out. 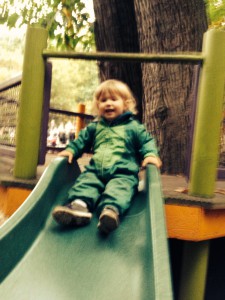 Despite this both children had a wonderful time, Eila went down all the slides and the zipwires and even on the highest bridge! Evan loved running in and out of the Twiggle houses and going down the little slides but he so wanted to be a big boy and go on the larger equipment!

We went to make a lantern for the parade and it was crazy busy! everyone was fighting over masking tape, space and glue in the tent so we took our lantern making kit to a quieter place to start assembling it. I did feel that it was a bit of a crazy free for all and this possibly could have been better planned with maybe set times for people to come so that it was less crowded. The atmopshere and attention to detail was fantastic, there were “Jack ‘O Lanterns” all around which were lit just before dusk, there were twinkling lights and dry ice along the paths on the way into the main wood and once the time came for the parade there was just a gentle glow of the lanterns and a hum of anticipation. 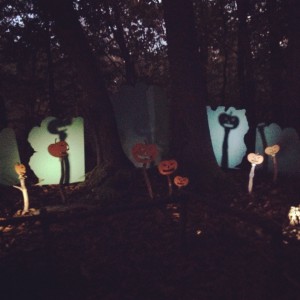 It really was a wonderful day out and the setting really creates such a magical, spooky atmosphere. We loved the fires dotted around the site and the fairylights and “smoke”. I think this photograph really sums up the feel of the place. 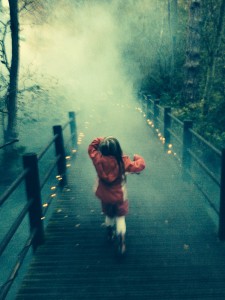 We will definitely back next year when Bewilderwood reopens for the new season. And we will be taking our friends!