As the weather gets colder even festival kids need to head indoors sometimes. Which leads me to the subject of ‘soft play’. The very mention of which induces a panic attack in someone like me – a festival-loving, easy going, more hands off parent.

The last time I went to soft play I was shouted at by a stressed out mother for the crime of sitting in an empty chair (which was hers, apparently, although I didn’t see a name on it). I was forced to crawl through tiny tunnels of sweaty, sick covered plastic in order to rescue one of my crying toddlers who’d yet to learn that getting down from somewhere is a lot tougher than climbing up. At that point I was dirty-looked by another mother who was coddling her (presumably only) child for apparently ‘abandoning’ my poor distressed baby.

Ah yes soft play. I would rather cut off my own feet with a pair of child proof scissors.

So we jumped at the chance to experience some indoor family fun that had been designed for parents like me. Big Fish Little Fish is a family rave on a Saturday afternoon, with real DJs, arts and crafts, a toddler area and a proper bar.

Big Fish Little Fish want to provide an afternoon out the whole family can enjoy, and Festival Kidz wanted to see if this was possible! So we took our six year old, her best friend, and our three year old twin girls.

We arrived and were greeted by very friendly staff dressed as pirates, handing out glow sticks to all the children. They helped carry the buggies down the steps to the buggy park and made us feel welcome.

This is what impressed me most about the event. Everyone was friendly and I didn’t feel at all awkward or judged there. Many people were there with friends, and it was obvious the parents were enjoying it just as much as the children. Catching up with people over a pint while also spending some quality time with their kids on the dance floor.

The venue was separated into three rooms – the arts and crafts room, the dance floor with a small stage at one end and a bar and seating at the other, and the ‘chill out’ room which had sofas and toddler play equipment. This did make it a little difficult to keep track of all four children and we found ourselves running around to check that they were fine, although there were always staff on hand to help and it felt very safe. 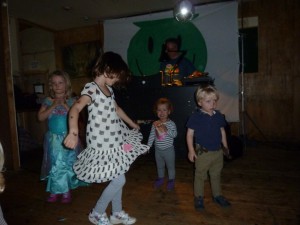 The dance floor was the star of the event. It was a small area with the DJ playing up on a stage.

They’d got the volume level exactly right too. It was loud enough to dance to without any fear of hurting small ear drums. My only criticism is that the music wasn’t consistently upbeat. The DJ was playing more laid back tunes at the beginning than he would at a real club.

Considering this was only a 2 and a half hour event I felt they could have gone straight into the dance music. But once it got going it was fantastic.

I was out on the dance floor (and at one point the stage!) with my six year old and her friend, bouncing around to house music from the old days. One of the dads was spinning his glow sticks enthusiastically and I grinned at him, recognising a fellow former clubber. He smiled back.

I’ve been to family dance events when the adults have sat around while the children occupied the dance floor, but here the parents were definitely enjoying it too. There were bubbles, confetti bombs and balloons, all adding to the fun.

My three year olds preferred the toddler area, crawling around in the tunnels and ball pools. The jazzy chill out music was lovely. I would have liked to have been able to hear the dance music from the main room, especially when it was so good. But it gave the little ones a safe place to go to and they had a great time. 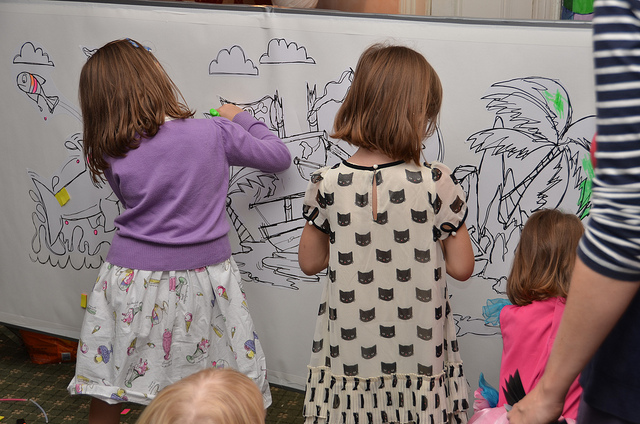 The craft room was popular with all of our children. They coloured in a large pirate mural and made masks and hats. There were also free smoothies which gave them all energy throughout the event.

Lovely fairy cakes were on sale, smaller ones for 50p each were a bargain and we took advantage of that.

For parents, the bar selling beer at pub prices was a bonus and we actually managed to drink a pint and catch up briefly with some friends we bumped into.

Finally, some indoor family fun that everyone could enjoy. And no sign of a stressed out, judgmental parent anywhere. 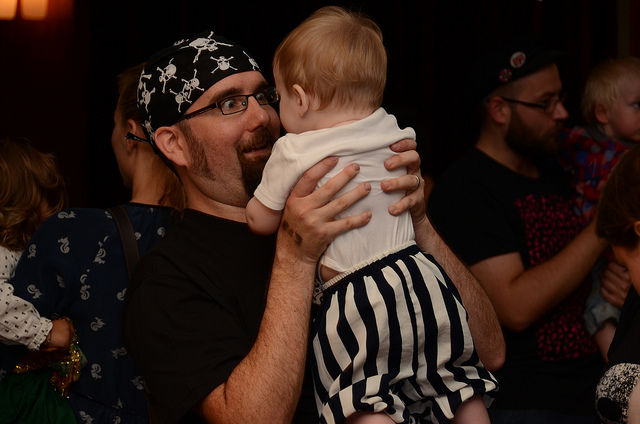 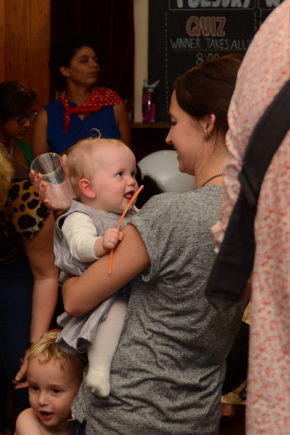 Big Fish Little Fish currently runs in two venues in London. The Effra Social in Brixton and the Dome in Tufnell Park. Festival Kidz visited the the Brixton event on 21st September. The October Brixton event has now SOLD OUT but they are announcing more dates – get your tickets early!