This is a lovely little festival in a great location with gorgeous views of the surrounding Dartmoor countryside. It’s a small festival with a great deal of local influence and the organisers have clearly realised that they can get the crowd that they want by booking The Levellers and New Model Army – seasoned festival goers with a chilled out, friendly attitude.  The bands started at 5pm on the Friday. We arrived at about 8pm and there was plenty of space in all the different camping areas. None of the spots were too far from any of the parking areas, and there were handy helpers with wheelbarrows on hand to carry tents and equipment for a small donation towards their India expedition. 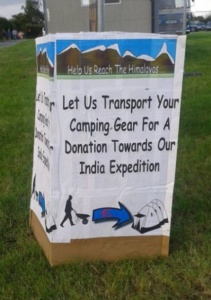 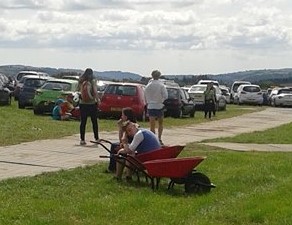 The main festival site had parking on one side of it, and the main camping field out of the main exit at the bottom, with accessible camping the closest to the main site entrance. The main campervan site was also close to the arena, just outside the carpark, but there were also campervan sections in disabled and quiet camping areas. There were two quiet and family camping areas in the next field down from noisy camping and also further away for those that really wanted their peace and quiet at night.

There were disabled toilets in the accessible camping area, but none throughout the main festival arena, and no baby changing or feeding areas, but I don’t think this was an issue, as due to the small size of the even, we were never too far from our tent.

There were easily enough toilets. One luxury was all the flushable toilets. There was a block in the family camping area, and three blocks in the main arena. Sometimes there would be a small queue, but there were portable toilets for anyone that didn’t want to wait. They were kept clean, and stocked up with soap and toilet roll. Lovely. The litter pickers also did a fantastic job in the mornings, completely sorting out the whole site, including approaching campers by their tents offering to take rubbish away. There were easily enough rubbish and recycling points around the camping areas, and no shortage of water points, and fire buckets.

There were no showers, sadly. I believe that they did not have to provide them as it is only a short festival. I felt very scummy after the two days though, and was very relieved that it hadn’t been a muddy one.

There were food vendors for every palate, although not many advertised options for children. My two have unfortunately limited diets and were happy enough with chips and pizzas. The snow cones were also a big hit. There were stalls offering locally sourced meats, and also plenty on offer for vegetarians/vegans with enough variety to see us through all the meals we had at the festival. The food area was close to the second stage in the marquee but as the music alternated between the two stages, so we didn’t have to miss anything, we also got to enjoy Neville Staple while we ate.

There was one bar, done up as a speakeasy, ready for Saturday’s gangster theme. It was well staffed and well stocked with local ales and a good range of ciders and lagers. I didn’t get to find out what the ciders were as we were offered “cloudy, fizzy or blackcurranty” which is really all you need to know, and at £3.50 a pint you can’t really go wrong.

We spent an enjoyable evening browsing the clothes and jewellery stalls,  and rounded it off perfectly with New Model Army treating us to a selection which included more of their newer songs, along with older favourites .

The arena opened up again at 9am for breakfast and tai chi, and the Village Green was open for children’s activities not long afterwards. There were a number of free activities. The Kids’ Marquee was the place to go for face painting, hair braiding, tutu and horn making, painting, colouring and gluing. Outside this marquee were entertainers including a magician.

There was a physics tent for children to try out some great hands on experiments, such as the whirlpool in a bottle. I loved the giant marble run, while the bubble makers managed to get massive bubbles blowing everywhere, and there was a range of bubble wands to play with for the children. One tent was showing old adverts and newsreels, which provided a fantastic history lesson. Another piece of history was brought to the festival in the form of two traditional caravans. Festival goers were invited to have a nose around and find out more for a small donation.

The local influence was again apparent when some of the local firefighters turned up with a fully stocked fire engine which the children adored playing and dressing up in.

Dartmoor Reptiles were also at Chagstock. They had big snakes and small snakes and their handlers were swamped with people wanted to have them draped over their shoulders. I for one was happy to opt out of this, but it was great to watch the children have a chance to get up close.

A  lot of the entertainment was very much akin to that which would be found at a school or village fete.

My children’s school summer fair always, without fail, includes a crockery smashing stall, and yes – there was one of those at Chagstock as well. Children and older revellers alike had great fun throwing and smashing! At £1 for three balls, they must have made a killing, but in no way did it feel like money wasted.

If that wasn’t enough then there were many more activities to entertain the littlies. After the plate smashing, I think my son’s favourite was either the penalty shoot out, or the small fairground train. The bouncy slide was also predictably  popular.

For older ones, if they were brave enough, there was a gyroscope, and a climbing wall. There was also target shooting, banana boats.

One of the grossest things I ‘ve ever seen was the Poopla. For 50p (all proceeds to Water Aid) contestants could throw ten plastic, but ever so lifelike poos into toilets which had different scores according to how far away they were positioned. Ingenious, but completely disgusting! So of course, the kids thought this was brilliant!

I loved that the Saturday theme was gangsters and molls. I much prefer dressing fancy to fancy dress. So many people put in so much effort with their outfits. The kids especially looked fantastic. For anyone unprepared for the theme, there was a great vintage  and vintage style second hand stall, supplying pork pies, fedoras, beautiful dresses, and great suits and waistcoats. 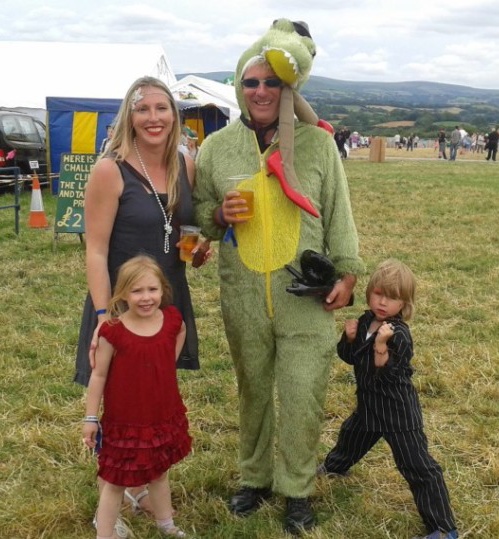 Other entertainment on the Saturday was the samba band, that would find a spot, set up, play for a bit, and then invite everyone watching to come and have a go. Both my children enjoyed cycling smoothies (which I enjoyed drinking!)

There was a holistic area, Peaceville, where it was possible to purchase several different types of massage and beauty treatments and products. I was surprised, however, that there was nowhere to practise circus skills as I thought that it was generally a given at festivals, and something that I look forward to.

Another notable lack was that of an essentials shop. There were free taxis to and from the nearest town to compensate for this, but we missed being able to pop on site in the morning to get a pint of milk and a sausage roll. We managed though – it just meant I had to buy a morning cup of tea rather than brewing it myself.

New band discoveries for me included the very dapper Electric Swing Circus, and also Molotov Jukebox (fronted by the lady who played Tonks in the Harry Potter films). After a day spent Leveller spotting around the festival, the band did not disappoint when they took to the stage. They played a great set for the Chagstock audience, indulging us with all the big favourites from the nineties. It was a perfect way to end a really fun day. (I believe there was a bit of audience participation singing fun after the Levellers, but that was past my bed time, so I don’t know much about that.)

I’d recommend this festival to families with children of toddler+ age, especially if they are Devon, Somerset or Cornwall residents, as we had a lovely weekend.