In 2017 Green Meadows Festival celebrated its 6th year when it was awarded the Festival Kidz Gold award in the ‘Best Small Festival’ category. The festival is indeed quite small, around the 2000-2500 people size, with weekend and day tickets available at a very reasonable price. The festival donates a large portion of money made to the Teenage Cancer Trust every year and most of the event staff are locals volunteering their time for free.

As a regular festival going family I’ll admit that we hadn’t heard of Green Meadows before so I was delighted to be asked along by the organiser of the kids areas to come along to do some photography for them this year as they had lots of exciting new things planned in those areas and they were all feeling boosted by winning the award.

We packed up the trailer tent and headed off to outskirts of Peterborough, arriving at the site around 10am on Friday morning. Green Meadows is a 3 day, Friday to Monday festival, and the public can access the site from midday with the arena area opening at around 4pm.

There are 3 main camping areas to choose from:
• General, for late nights and close to the action.
• Family camping, for the big family tents, away from the noise with a communal family changing and feeding tent, this field also had a few ‘glamping’ bell tents setup at the far end.
• Quiet Camping + Family campervans.

We picked the Quiet/Campervan field to setup the trailer tent. All of the campsites had loads of room for you to setup camp, were reasonably flat and had a bank of chemical loos and two cabin style toilet blocks with real flushing toilets. Unfortunately these were out of action after day 2, but the luxury was welcome while it lasted. There were sinks for washing up and a bank of water taps all to hand as well.

I did notice that near the entrance/exit of the Quiet/Family campsite there were a few caravans setup next to a disabled toilet so clearly the festival had gone out of the way to accommodate a couple of wheel chair users and give them an accessible space close to the festival, which was a nice touch.

It took about 10 minutes to walk from our tent to the furthest end of the arena, so not too bad for nipping back to the tent for snacks, drinks and change of clothes for the evening.

The first thing we noticed when entering the arena area was how compact and flat the festival is. Its held within the estate of Elton Hall, spread across three areas divided by trees, with a rough farm track cutting through the middle.

From our campsite you entered the Village area – this area was where all of the food vendors were set up along with a communal fire-pit and the Village Pub. The pub is the smallest stage venue with a bar inside and it changes name each year to coincide with the fancy dress theme. This years theme was Sci-Fi so the pub was aptly called ‘The Alien’.

The pub played host to loads of great acoustic performances during the day and early evening including some big names like Mark Morriss (The Bluetones), Martin Carr (The Boo Radleys) and Jon Sevink (the Levellers) teaming up with Dan Donnelly (The Wonderstuff) – then the DJs took over into the early hours playing indie music. 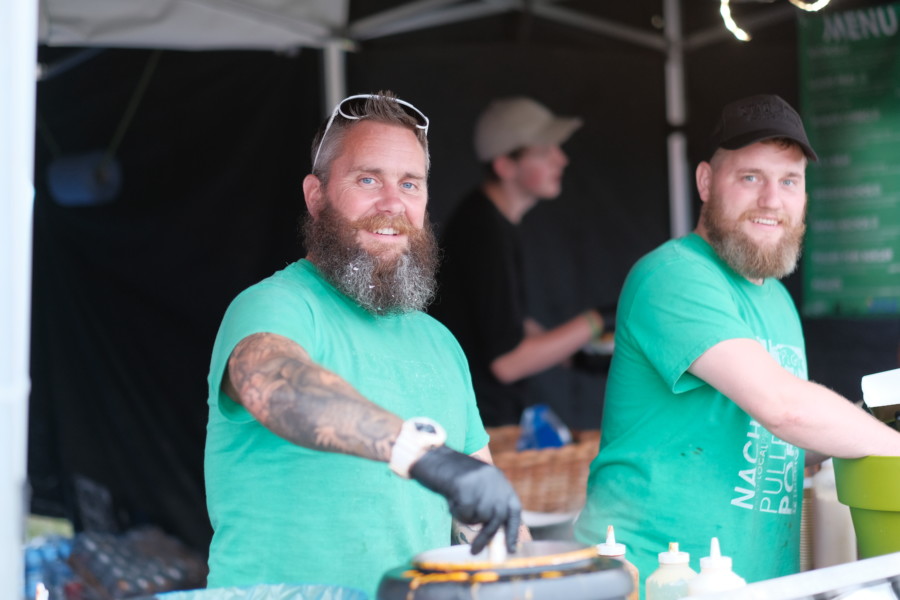 There were only a handful of food options on offer, but most tastes were catered for, with wood fired pizzas, chip shop, pulled pork and loaded nachos, flatbreads and curries. A Coffee spot, cake stall and a Pick & Mix stall were there for those with a sweet tooth and finally a ‘corner shop’ selling festival essentials and offering phone charging etc.

Just off from the village, through a small wood where the kids were doing bush craft (more on the kids later) you entered ‘The Garden’. A rectangular area housing the big-top style ‘dance tent’ called the Garden Stage, this stage hosted the main weekend dance/house/techno DJs and went on until a modest 2am with popular sets from Utah Saints, Shades of Rhythym, Seb Fontaine among others.

There is also another bar here, a wooden Scandinavian ski chalet style structure called ‘The Danish Quarter’ with nice seating in and out and very smiley happy bar staff. Next to this was a new tent for 2018 ‘The Escape Pod’ – Green Meadows new Teenager area (again, more on this later).

The third area, also accessed from the village, is The Meadow. A main arena with two stages, a bar and a large area dedicated to the kids activities. The Den, a smaller stage, has a cocktail bar and bounced to the sounds of DJs playing funk, soul, disco and anything in between from 2pm to 2am.

The large main ‘Meadow’ stage was nicely situated with plenty of room to view the acts from just about anywhere in the area. A good selection of acts played the stage over the weekend, with local bands during the day and bigger names during the evening. Highlights for us this year were a rainy dance-along to Craig Charles spinning his hugely popular Funk and Soul, The Nevil Staple Band blasting out Ska and Reggae hits and (my eldest sons favourites) The Correspondents blowing away the crowd with their energetic stylings. I (Dad) also managed to catch The Hoosiers close the stage on Saturday night after a really heavy downpour of rain, they were on top form showing appreciation to the crowd for sticking it out. 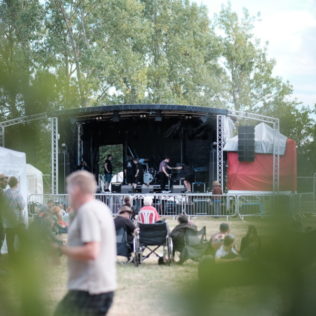 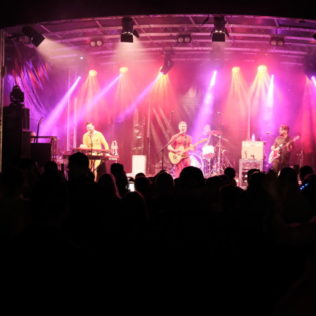 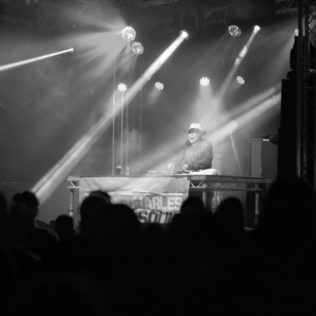 It was great to be able to see and hear the acts while we chilled out in the kids area at the back of the field, which brings me onto –

Our boys are 4 and 7 so we were interested to see why the public had awarded Green Meadows the gold award last year, and if they agreed! First and foremost for a small festival with such a low ticket price the amount of activities on offer free of charge was very, very welcome indeed. It can get very frustrating as a parent at a festival to be constantly handing out money for ‘one more go’ or to have to say “No” for the six hundredth time.

The kids area took up a good 1/3rd of the main arena and there were hundreds of happy kids running around enjoying it. Our kids enjoyed the dinosaur show, the bubble show and the birds of prey – but most of all they enjoyed going on the bouncy castle and giant slide without having to ask us for money, it was a welcome change. 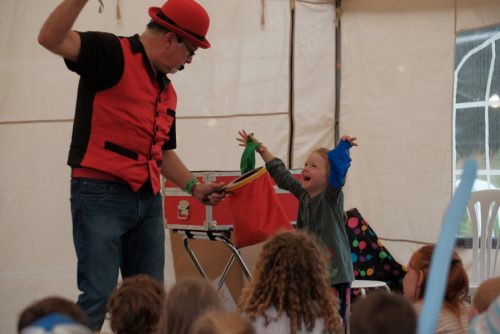 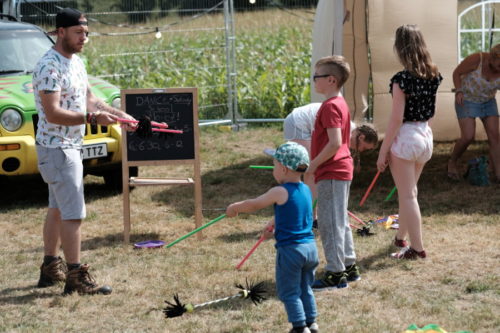 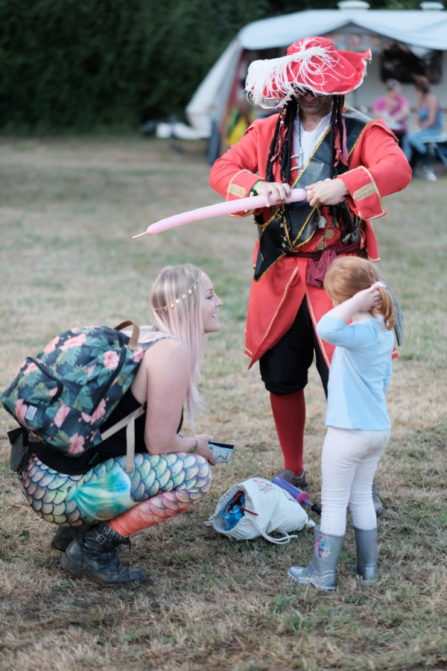 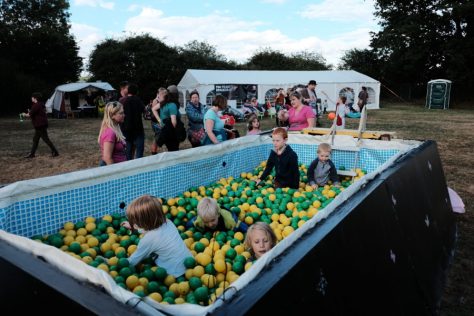 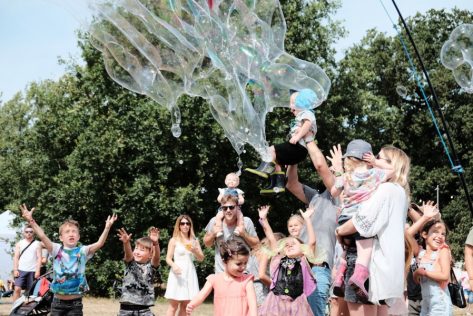 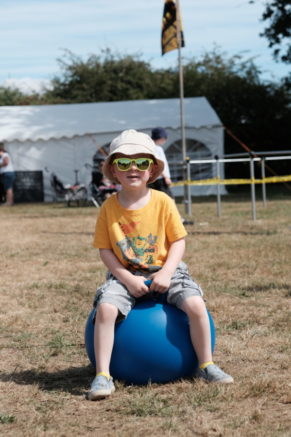 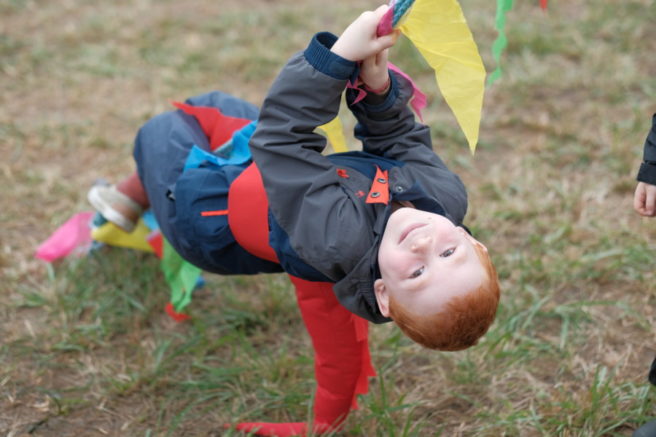 The roaming entertainment was great in the kids area too, balloon models one minute then a bubble show with literally thousands of bubbles, the handlers from the Birds of Prey display walked around site letting you get up close and you’d see & hear the Reggae Rickshaw scoot past loaded with kids giggling and waving.

A popular activity for all ages was the bush-craft school in a small copse of the wooded area, running pre-booked sessions every hour in which the kids got to build dens, cook in a mud kitchen, toast marshmallows and try out slack-lining in the trees, there was great feedback on this and the kids loved getting ‘wild’ in nature.

On the Saturday night a theatre stage ‘popped’ up in the family camping field and there was a live performance by Illyria Outdoor Theatre of “Hound of the Baskervilles” for families to relax and enjoy as the sun set. Unfortunately the heavens decided to open while this was on, but, huge respect to the cast as they carried on and the crowd popped up their umbrellas.

This year Green Meadows added a teen area called ‘The Escape Pod’ – which is a large tent filled with sofas and straw bales for the little adults to hang out and chill with the other teens. Some great activities are provided here too including Beat Boxing, DJ skills, Break Dancing, Graffiti art and a popular wood whittling class. It was great to see the teens enjoying having somewhere to meet friends and get away from those embarrassing dancing parents.

A few older kids wanted to get in on some of the workshops in here (7-12 age group) and when there was little uptake from the teens or quiet periods the people running the workshops gladly got them involved. This was duly noted by the staff and they told me they will be looking to ensure this ‘middle’ age group is more catered for next year.

Green Meadows, now in its 7th year, is clearly a very good small festival. It has a dedicated audience and over the years has pulled in some great acts for the low ticket price, it will be interesting to see where they go from here.

Personally there are a few improvements that I would like to see, these are only minor gripes, but the main one being there were no obvious water refill points in the festival arena. Although its only 10 minutes walk back to the campsite to refill juice cups, in the heat our family gets through a lot of liquid and walking back to refill became a chore. Having a water point near the kids area would really be a welcome improvement.

It would be nice to see a few more food vendors, with more variety, spread across the site and a few snack type vendors by the Main Stage would be good.

The Health and Well Being area (providing Free Yoga, Meditation and talks etc.) was in the general campsite area, and unless you knew it was there it tended to be forgotten about. The Village would seem like a natural spot for this if a few of the food vendors were moved, or perhaps find a nice wooded area off the main thoroughfare. This would also be an opportunity to add a spoken word/comedy/talking shop style tent to this area – something that is very popular at lots of other festivals. 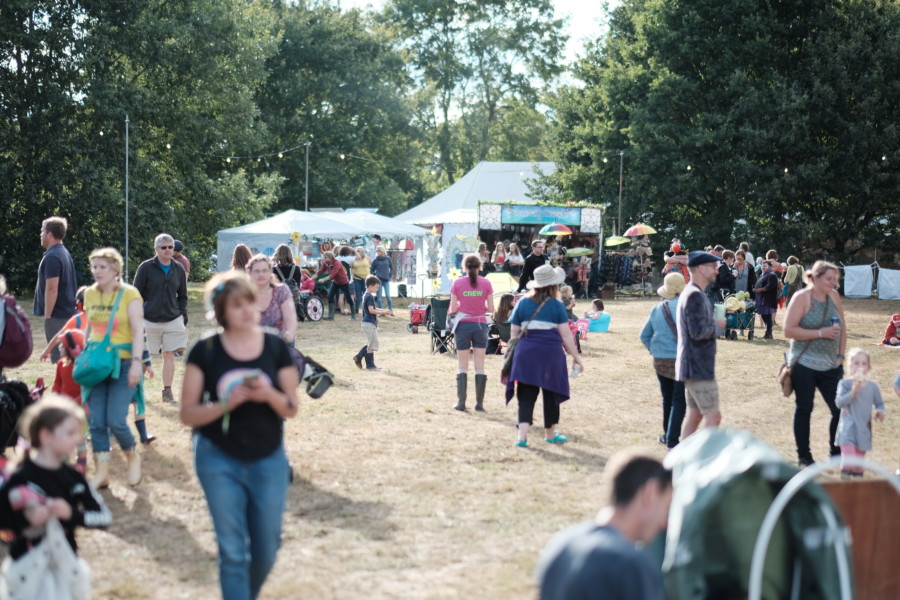 Overall we enjoyed our first trip to Green Meadows, once we got our head around the small size, I can see how the festival won over a lot of parents last year. It is a great, friendly, festival to go to if you want to try ‘festivaling’ as a family without splashing out loads of cash or just want to visit for a day without camping.

It’s small, friendly, flat, cheap, has loads of free kids activities run by a very dedicated crew and a great variety of music genres are catered for. What more could you ask for?