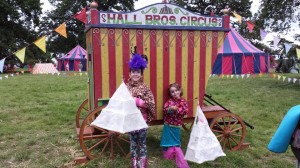 A perfect little celebration of the arts and the glorious outdoors all wrapped up in a weekend of family fun.

This was our first Just So festival and we would happily return every year. The festival is only in its 5th year but it is now a firm favourite on the festival calendar for families, and it’s easy to see why.

According to fellow campers, improvements had been made on the camping and speed of access to the site from the previous year. We arrived just as the festival opened and although we found the signage to the camper field slightly confusing (I think due to someone driving in to one of the road signs and moving it) it took us no time at all to get on site and set up. You are able to the pitch up before wrist band collection which we find is always an added bonus with kids.

The campervan area circles the general tent camping which means you can camp with friends in tents but it did feel a slightly strangely set up as the car parking was closer to the festival entrance than the tents and campervans depending on where you set up. The central camping field was really spacious with heaps of space for the kids to run around but the campers had much less space and formed a horseshoe around the tents. You also had to walk through a car park to access the festival which meant we were more reluctant to let the kids wander on their own (dark at night too).

Not knowing the festival site, we ended up at the furthest point from the entrance, and the only set of toilets in the field. Still only about 7 minutes away but just a shame the car park and campervan area wasn’t switched around so everyone was camped nice and close. 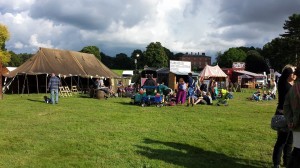 After a brief 10 minute wait for wrist bands we were in to the site. We thought £4 for a map and really nicely put together programme was great value and then we came across the bar.

Overlooked by Rode Hall the site is split in to a few areas surrounding the Lazy Day’s Lawn, where much of the theatrical entertainment takes place and the living room stage is located. Through the Spellbound forest (and Woodland Theatre) you can make your way down to the High Seas with its lake, pirate ship and sandpit. The food and Footlights main stage is in the other direction and centered round a large barn with seating which was great when it rained. Other attractions were the dance workshops in the Jitterbug tent and the Curious Campfire with stories from 6pm till late. 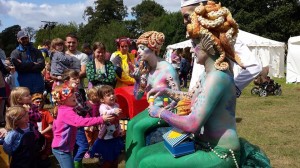 All of our family love to dress up but at smaller festivals, or ones aimed more at families, we tend to find less people bother. For us, dressing up makes a festival fun and gives people a chance to escape from normal life.

Each year Just So hold a tribal tournament where guests choose one of 6 tribes to join. This is obviously an optional part of the festival and you can get as involved as you like.

Foxes were out on mass and clearly in the lead all weekend. All the kids loved getting fully involved in the tribe activities, dressing up and chatting to others about the different gangs. My 4 year old was so excited every time she earned a gold stone from one of the stalls or festival crew and she insisted we go immediately to the score board area to add our stone to the Lion tube and compare how the tribes were doing. It got quite competitive. 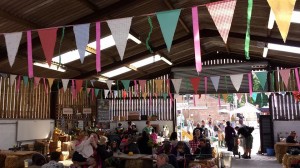 Food, Drink and Other Expenses

We were delighted not to find fun fair rides and loads of trashy sweet stalls. Our kids seemed really well behaved all weekend and didn’t pester us for money as there wasn’t lots of temptation and all the activities were free. Just enjoying the freedom and the great location was enough for them, which helped us have a really stress free weekend.

The local real ice creams was absolutely delicious (£2.50) but with only 1 van and what seemed like only 1 member of staff the wait was always long and we found it closed a few times. The woman also seemed quite stressed (understandable when there are 20 people waiting) and rather impatient with my 8 year old. With this many kids I hope they invite another van next year.

We thought all the food and drink was good value, waits were no more than 10 minutes and there was plenty of choice considering the festival is only 3,000 people. Pieminister £7, paella £7, fish n chips £7, crepes £3.50+, plus kids portions at many stalls. All the food vendors are kept in 1 area (with the exception of a couple of stalls by the High Seas) so litter across the site was almost non-existent. 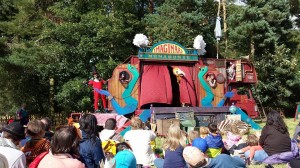 Just So had possibly the cheapest pint we have found at a festival – £3.50 ale and £4 lager delivered from the back of a couple of converted horse box bars around the site. £1.50 tea / chai, £2.50 mango lassie.

There were a few local companies with small stalls selling general festival stuff and some cute handmade baby things but none of the shopping was in your face and crowded. Unfortunately one of the stalls did sell annoying bubble guns that sounded like space invaders and it seemed that almost every child at the festival had one which became quite irritating by Sunday.

The tribal tournament was great fun and such a unique idea for a little festival. It really brought guests together and gave the festival that silly edge that we enjoy. It’s also a great way for kids and adults to start chatting to each other.

Highlights for us were the legendarily wordsmith John Hegley, Lazlo Baby and the brilliant Mr Wilson’s Second Liners brass band who transported us back to the early 90’s with some top rave anthems in a wild and anarchic jump around set. 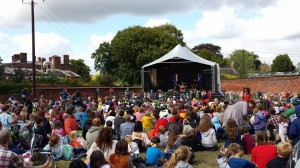 Although music seemed to be a secondary thing at Just So, lots of thought went in to choosing the bands to make sure they would entertain kids and parents. They certainly didn’t opt for the obviously naff kids’ acts that parents have to endure at some festivals, but equally, kids were dancing at all the bands we saw and there was plenty of space for them to get right to the front of the stage, even at night.

We enjoyed several theatrical performances across the site like the Vintage Circus Jugglers, Shall Bros. Circus and the beautiful Mermaids who emerged from Rode Hall Lake.

Les Enfants Terribles traveling performers provided a mesmerising show with the Imaginary Menagerie, all from the back of their converted old Bedford horse box. My 4 year old loved it so much we had to go back to see it again.

Most of the entertainment was aimed at the kids and all of it was family friendly. In my experience, if the kids are happy, then I am happy. 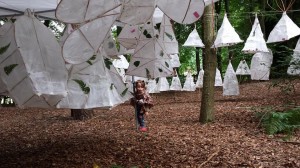 Our kids also loved making the lanterns in the woods and taking part in the parade.

There were a few brands at the event but it’s quite low key and not in your face. I do hope they keep it this way and are able to keep the festival going without caving in to any more sponsorship like so many other festivals. Consideration had been given to the brands there and they all bringing something to the event other than just free samples. BEAR gave out free cereal and also provided a footprint hunt which our kids really enjoyed and Weleda, Sunsense, Naty and a few others all provided activities.

We loved Just So and if you are looking for a first festival to go to with little ones it’s perfect. Older kids, especially teenagers may find they struggle to fill their weekend if they are not in to the great outdoors or just hanging with their family. It’s a really relaxed festival with a slow pace and there is certainly no charging around or people rolling about wasted. 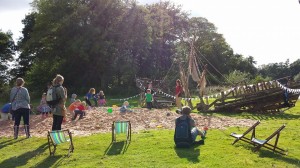 If you want to read more from some other visitors this year check out musings from the potting shed and the adventures of baby Isabella at Dear Mummy. For information on  Just So 2015 visit our factsheet.

We hope to be back @afieldsomewhere