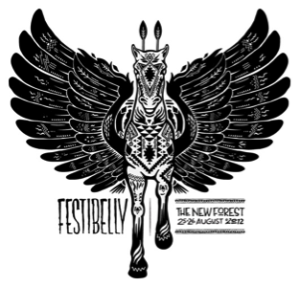 Getting there – No queues.  The carparking field was a bit of a challenge to get into with ruts and a steep entrance but we managed OK.  It wasn’t far to carry our stuff as the camping was in the field next to the carpark.

When we arrived, no one seemed to know if there was a separate family camping area so we were directed to a spot closest to the Owlery kid’s area.  Unfortunately for us, this turned out to be the worst place for a family to camp because it was also adjacent to the Terrapin Station which was open and full of partying people until 5am!!

We did discover later that families were supposed to be directed to the top corner of the field (which with hindsight made a lot more sense) but having already pitched up at the point we couldn’t be bothered to move.

The Line Up and Entertainment – Music line up was excellent.  Truly fantastic in fact – so much better than I expected.  Not many bands we had heard of but really high quality all the same and it was great to hear new sounds – some of which I’m sure will be future headliners at bigger festivals in the next year or two.  The programme seemed to be a bit hit and miss with the timings so I was having trouble working out who each band were sometimes but I did see some fantastic sets.  There were several different areas for music and also workshops and some spoken word and comedy which was great.  Definitely well worth the ticket price.

Kid’s Stuff – There wasn’t a huge amount for kids to do, mainly because there wasn’t a huge amount of kids.  The kids seemed to base themselves around the Owlery where there was sometimes something organised going on like a teddy bear’s picnic or a Hip Hop workshop, or a nearby stall had loads of hula hoops, frisbees and stilts and giant garden games for kids to play with – my kids spent the entire weekend hula hooping and playing Jenga!  We also tried using their wheeled toys (I think they were called funwheels?) after one too many sherbets – it seemed like a fun idea but of course we fell off in spectacular fashion, much to our kid’s great amusement.

The Facilities – Toilets started out fine but soon ran out of loo-roll and became rather smelly.  Luckily we discovered Bog-in-a-bags which were an absolute godsend when the portable toilets were full and little one was refusing to go in them! Highly recommended! 😉

The Camping – The site was small and on a slight slope but if you looked around you could find a fairly flat spot to pitch your tent.  The camping was really close to the main arena – in fact the whole festival was in the same field – so it meant you didn’t have to carry so much stuff around as you could leave waterproofs and jumpers at the tent and just pop back if needed.  Perhaps next year they will sort out a better area for families – or at least make sure all the stewards know where it is!

What improvements could be made?  A designated family camping area away from late-night revellers! It’s a festival and I don’t mind people staying out all night partying but as a parent we had to sleep instead and that was difficult when you are next to 500 teenagers singing along to Bon Jovi in the ‘silent’ disco!
There was also a group camped near us who had brought a loud stereo and sat outside their tents drinking and swearing loudly all night – again our fault for not camping at the far end of the field, but not pleasant for our children all the same. It would have been nice if personal sound-systems in the campsite had been better policed.

Did you feel safe? – Yes.  The site was small and the crowd was friendly (if a little young and drunk!) so we felt it was safe to let them roam around on their own a bit.  Even at night we put them to bed while we watched bands in the tent nearby, knowing they could easily find us if there was a problem.  They did expand their vocabularies slightly more than I would have liked, mainly due to the number of non-parents with very little child-awareness… but again, this is to be expected, and for us is not a problem – we just use the opportunity to teach the kids that it is not appropriate for them to use those words themselves (if they ask… most of the time it goes over their heads anyway).

Any other comments?  Families are in the minority here, which we actually liked.  It meant we felt we were at a real festival rather than paying a hefty price tag only to spend our day shut away from all the action in a remote craft tent.  Festibelly is small but has all the elements of a bigger festival that I enjoy, lots of different areas, great crowd, line up and atmosphere, very laid back but it’s not too busy.  The site was really nicely laid out and very arty and attractive with flags and bunting and festoon lighting.  You might not get much sleep, but at least you will have experienced the atmosphere of a proper festival!

Most memorable moment:  My daughters staring in disbelief and awe as a young girl about their own age showed them all sorts of impossible hula hoop tricks!  Talk about inspirational!

Music-wise we loved Kitty, Daisy and Lewis, Skinny Lister, some awesome band called Evergreen (?) and so many other bands we caught but didn’t find out their names…

Would you go again? Definitely.  But next time we’ll camp further away and bring our ear plugs so we can sleep!

[Editor’s note: Thanks Mark and Sue, I remember you! Was lovely to chat to you and glad we came to your rescue with the boginabag!  The hula hooping girl was my daughter – she’s obviously been to too many festivals ;)]

Festibelly is held in Lymington, New Forest, Hampshire in August each year.  For more information see the main Festibelly listing.