Larmer Tree is a wonderful family friendly festival for all ages

Review and pictures by Naomi Jones – with her girls Eloise (6), Charlotte (3) and Amelie (3)

I have wanted to go to Larmer Tree festival for so long – mainly because of its reputation for being one of the most family friendly and inclusive festivals in the UK. And it didn’t disappoint. 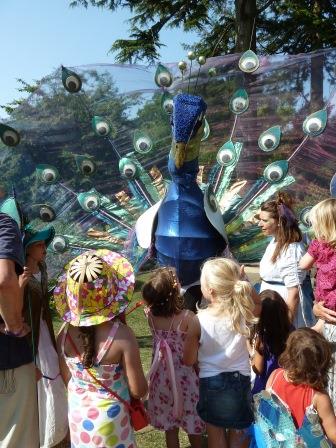 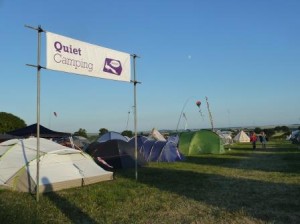 The campsite was beautiful, situated on the top of a hill overlooking a valley. It was well laid out so that fire paths remained in between tents and there was loads of room – the children had plenty of room to run around in the camping field. We regretted not bringing a kite as we could have easily flown one up there!

The facilities were clean, plentiful and well maintained. There were mobile toilet blocks that were kept spotless and I didn’t encounter a single dirty toilet – they were cleaned regularly and nearly always had toilet paper and soap. There were drinking water taps spaced regularly throughout the site, and I never had to queue for water or toilets. I even managed a shower on the Saturday morning and I didn’t need to wait long – there were at least 4 blocks of lovely hot showers in the campsite. The car parking was right next to the campsite, and they let us drive to our tents at the end to pack up, which was wonderful as we could pack straight back into the car.

I have to give a special mention to the treatment of the elderly and those with disabilities around the site, because it was honestly so great to see them being treated with such respect. There was a raised platform in a good position so that people in wheelchairs could see the stage, proper disabled toilets and paths, and the ‘Larmer Express’ which took those less able to walk from one end of the campsite to the front gate.

The crowd was the oldest we have ever seen at a festival – I would say 40 was about the average age of the adults which made the vibe very laid back. It did miss a little bit of a festival ‘edge’ because of this, but I think this appeals to most families and I was happy not to have to avoid the drunken gangs you sometimes see at festivals. I noticed a lot of families who had brought grandparents along and they all set up chairs and picnics at the main stage, and it was lovely to see the whole family being included in this way. I spoke to some people who had grandchildren but were there without them – they had been going to festivals for years and they didn’t intend to let their age stop them! However there was a tent called The Social that had DJs playing until the early hours, we went to bed at midnight so didn’t experience this but I heard it was great fun, so you could party late if you wanted to.

The only problem we had was that for such a small festival it was spread out through the park meaning that with small children it became tiring to trek around it to see anything. We soon found ourselves staying put in either the children’s area making things, or at the main stage watching the bands. Unfortunately this meant that we missed out on most of the other entertainment, such as the circus, comedy, and the other band tents – the range on offer seemed very good so this was a shame, we will just have to wait until our children are older! We realised early on that we had to carry the portable potty around the site, as there were no toilets in the children’s areas making life very difficult for a family with 2 potty training toddlers! But no one minded us doing this – so my advice is to take a potty around with you. 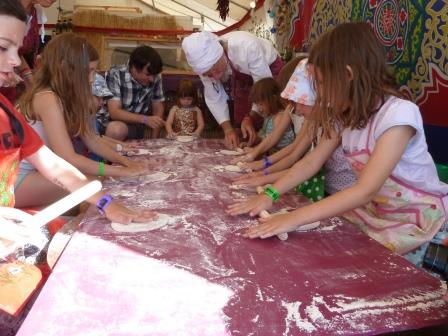 There were so many workshops and arts and crafts, which were separated into three sections – children, teenagers and adults. This helped us because as much as I love the ages mixing sometimes small children need a bit more space. During the festival we made and ate pitta bread, decorated masks, practiced our circus skills, watched puppet shows, and at night we explored woodlands filled with fairy lights and watched the fire show with twirling hoops and poi. 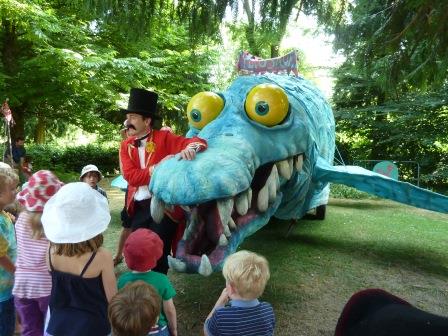 The highlight for the children was Horace the pliosaur – a large puppet dinosaur which you could actually climb inside to watch an interactive film inside its belly. This was exciting and enchanting – immersive street theatre at its very best; the creation of Emerald Ant, containing a film by the great Forkbeard Fantasy theatre group.

The children also loved seeing Shlomo’s Beatboxing for Kids – where he demonstrates the art of beatboxing before getting some children up on stage. It’s a wonderful thing to watch – he managed to coax even the shyest child to participate and added his own sounds to transform them into a real (and very adorable) beat box band. There’ll be children going ‘Prrr Te Khh’ around the house for weeks. We were even lucky enough to meet Shlomo after his performance where we discovered that his family loved the Festival Kidz website and had found our advice invaluable when taking their 2 year old son to festivals. The admiration is mutual Shlomo!

The highlight for me was the Sunday afternoon carnival – we spent a large part of Sunday making costumes and then joined in with the procession, dancing along behind the drums, weaving our way through the whole festival site while everyone else watching and waved. When we went past the main stage the sections of the carnival were announced, which was wonderful for the children as they really felt involved. The children were the first part of the procession, all dressed as flying fish, then the teenagers all as green aliens. Then the adults with giant people puppets and finally the Larmer Tree peacock – a giant puppet which the children gathered round to stroke. 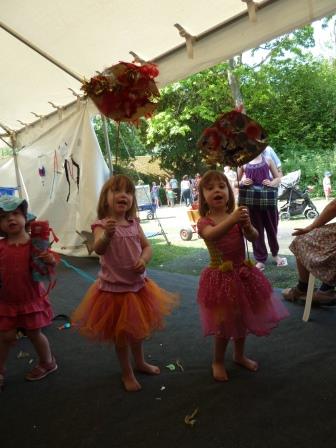 Sunday ended with a lovely relaxing set from KT Tunstall followed by a fun jump around to festival veterans Bellowhead. And just as I was commenting there were no fireworks at the end, the wonderful British weather treated us to a massive tropical storm with dramatic forked lightning blazing across the sky. It was a stunning end to the weekend – thank you Larmer Tree for arranging everything so perfectly!