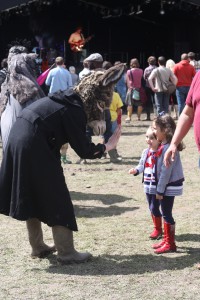 Reviewed by Lisa Morris, husband Joe and 2 children, aged 4 and 9.

Psychedelic, bonkers, imaginative and uplifting! That’s how I would sum up the Lunar Festival.

This is the first year that the Lunar Festival has taken place at Tanworth-in-Arden, Warwickshire, although apparently they had a “practice” event a couple of years ago.

As we live close by, my husband was able to go ahead and set up camp and we joined him once school had finished. Our travelling time to the festival was under an hour, much less than usual. This was less tiring for everyone involved and has made me think about the value of attending local events, especially during school term time.

It didn’t take long to explore the festival site, as there was one main stage and a couple of other areas with tents for dancing and food stalls. For me, the fact that the festival is small was a bonus as it meant that our 9 year old could go for a little explore and I felt confident that she could do this safely. 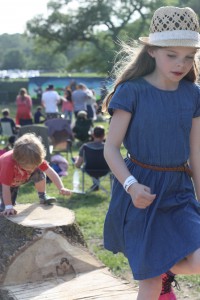 The festival is small but beautiful; you could probably walk from one end to the other in 10 minutes. In the middle of the festival site was a bonfire, which was constantly alight and kept everyone cosy. The campfire was surrounded by log benches which served as a barrier to keep children from coming too close, provided great seating and was also decorated with carved messages and animals. My son (aged 4) loved standing on the logs, playing air guitar or sword fighting with his sister.

At the head of the campfire was a majestic carved wooden bird, watching over the proceedings. By the Lunar stage there were beautiful spray painted posters and an artist in residence who continued to paint throughout the festival. 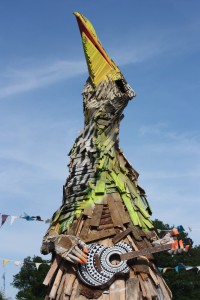 The majority of the children’s activities took place on an adjoining field next to the main festival site. There was a varied programme of activities for children of all ages, including circus skills, a climbing wall, sports, crafts, pottery, sword decorating and stories around a separate small campfire.

My kids had a great time at a felt making workshop run by Ursula Westwood, making Yoda pictures and a peg doll Batman with a flowing cape. This cost £3 each but they were entertained for well over an hour. Most activities were free and when my kids weren’t attending a workshop they were playing their own imaginary games, cartwheeling around the site or dancing to the psychedelic tunes being played at the Riverside Bar.
There were also activities open to people of all ages, including ska aerobics, Bhangra dancing and a Northern Soul dancing lesson, which was brilliant fun in the mud! We avoided doing any handstands or press ups though… 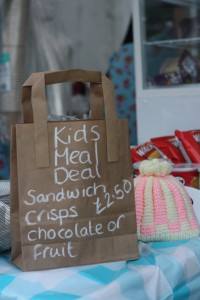 Food and drink
The food and drink on offer was of an extremely high standard and featured lots of award winning street food from Birmingham. The lead singer from the Polyphonic Spree announced on stage that his burger from the Meat Shack was the best he had eaten in his life and hugged the stall owner.

There was also Harefield’s Bakery, run by a previous contestant from the British Bake Off (their Sunday roast was incredible), a deli serving pasta and crepes, gourmet sausages, burgers at the Meat Shack and fabulous curries (meat and vegetarian) at the Lunar Café. Cups of tea were a pound and there was local beer available from the Purity Brewery for £4 a pint.

There were plenty of great food options available for kids too, including toasties, pasta, sausages and packed lunches, all for very reasonable prices (£3-5). My daughter loved the rocky road waffles served from a vintage caravan (£4).

Site and facilities
As I’ve mentioned before, the site was small and easy to navigate. Unfortunately there was heavy rain on the Saturday morning and the beautiful green fields quickly turned into a quagmire. However, this did not seem to bother the kids who merrily played on in their waterproofs and wellies. There were some small areas with walkways on but I think that they could have done with a few more of these on the heavy traffic areas.

The family camping area was a very short walk to the festival site (approximately 5 minutes) and the car parking was very close by. During the day the proximity was a bonus and it was easy to pop back to the van for meals, coats etc. However on the first night, the music was very noisy and went on until 3am. Even with earplugs in I found it difficult to block out the noise and couldn’t sleep. Not fun when you have to get up at 6am with a four year old!

I understand that in the family camping area it wasn’t as bad as they were further from the main festival area. However I happened to have a chat with the festival organiser about the noise levels and the volume of the bass seemed to be much better the following evening. The organisers acknowledge that as this the first time they have run the festival, they have discovered a few things that they would change next time and were eager to get things right. 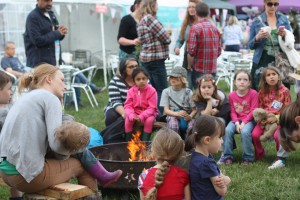 Toilets
There were plenty of toilets and they also had hot showers in the family camping area which was a real treat. I didn’t really have to queue at all so the numbers were about right. Unfortunately they were not very well maintained, frequently ran out of toilet paper and could generally have benefited from being cleaned and emptied more regularly. Some sinks were available on the kid’s field and in the family camping for hand washing.

Rubbish and recycling
There were plenty of bins on the main festival site and there was hardly any litter on the floor, less so than any other festival my family has been to.

Accessibility
Although there were no steep hills on site, the ground became difficult to navigate in places because of the mud and the lack of hard standing paths would be challenging for wheelchair users.

Music
There was a bit of a sixties/ seventies psychedelic theme going on, which felt different to any other festival I had been to before. The crowd was made up of people of all ages, including lots of people who had enjoyed the sixties first time around, trendy teenagers and families. It was a very friendly and inclusive atmosphere.

My personal highlights included the Polyphonic Spree (every member of the band and the audience had beaming smiles throughout), Temples and the chance to hear music from smaller bands such as Lanterns on the Lake and the Dirty Old Folkers, a Birmingham band who had the children dancing on stage with a giant panda, the Grim Reaper and a couple of nuns (I guess you had to be there). On a more chilled note, my husband enjoyed listening to Nick Drake’s Pink Moon album being played on Nick Drake’s own 1960’s record player in the woods at midnight around a camp fire.