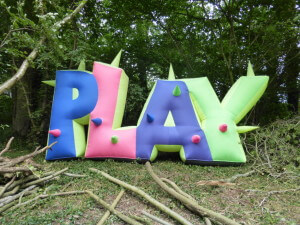 It was our first visit to Starry Skies, although we were excited about it because it is run by the same people as Shambala (my favourite of the adult festivals).

Starry Skies doesn’t list itself as a music festival as such – it is more like a family camping holiday with activities. For us, this meant it was all the best family friendly parts of a festival without the crazy madness, and with the chance to get a decent night’s sleep!

The weekend started well – we were told to drive up to the campsite to drop off our stuff before parking. This was amazing as we didn’t have to carry anything – we dropped off all our stuff then set up a few metres away! On the way out we could also drive back up to camping and park by our tent to load our car up – as we were doing it in the pouring rain this removed all the usual misery of dragging our stuff across the site. 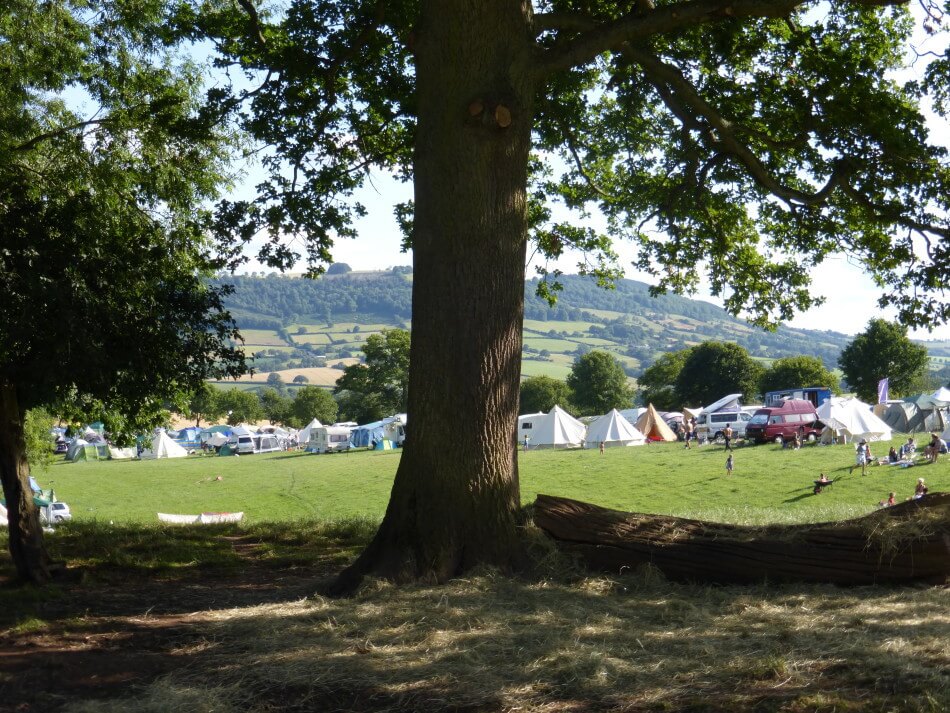 The festival was spread through sloping fields and woods in a beautiful valley close to the Welsh border. We were in a field separated from the main area with a path through the woods – this was immediately exciting for the children and they couldn’t wait to explore. There was a large block of clean toilets and showers serving the field we were camping in, plus more very clean toilets across the site. These were regularly cleaned and stayed perfect for the whole weekend – as my husband put it “there’s no drunk teenagers to destroy them!”

The main festival area had a large tent containing the music acts and the bar, a small cinema, a chill out tent (for the little ones), and several other tents offering non-stop activities. In fact there were so many things to do that it was difficult to decide which ones! On top of that there was a large adventure playground, the woodland tribe area, and many organised outings such as a farm tour and a forest school – which came into the site at certain times to collect people in a large truck. It made such a difference that everything was for children – there was no need to check which activities were offered for them, as it was all for them! Even the cinema showed only children’s films (which was fantastic when the children were tired, as they could watch a film while the adults watched the live music in the bar!) 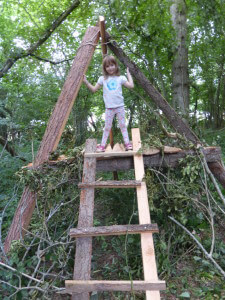 The festival was surrounded by woodland, leaving so much room for children to run and play, and really get a feel of nature and living outside. For my children aged 5 and over this was fantastic, but I would include a caveat that if you had very small children you need to keep a close eye on them so they don’t run into the woods! We were also advised to make sure our children were visible at night (so glow sticks were essential, to make sure they didn’t get lost in the woods!)

There were a couple of food stalls selling lovely freshly prepared food, and there were 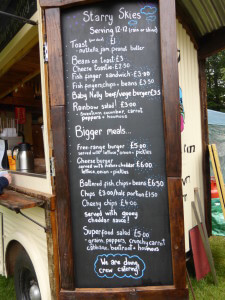 also several opportunities to do cooking classes and cook over the fire. There was also a well stocked campsite shop, better than any I’d seen at other festivals (they even sold vegetables!) and they let campers refreeze ice packs in the freezer which was fantastic for us as we like to bring our own food.

There was live music on throughout the weekend, and if the weather had been better I could see that we would have spent more time relaxing and listening to it. There was a large sandpit just outside the music/bar tent, so the children were kept occupied, and there was also a children’s mini rave called Little Fluffy Clouds which was great fun. There weren’t many opportunities to dance – but this was more of an activities weekend than a dancing one. 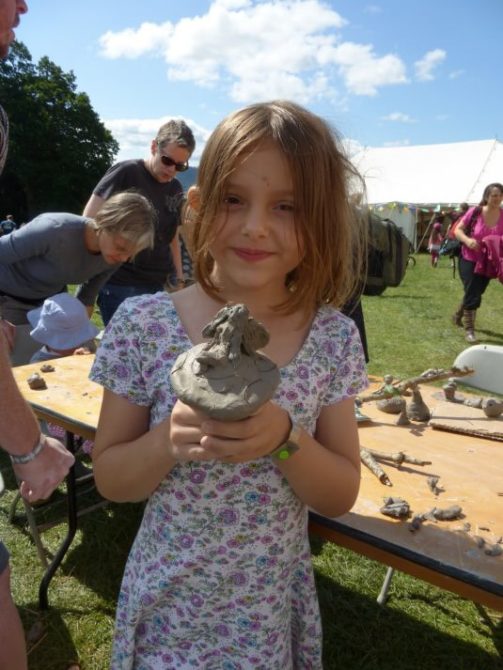 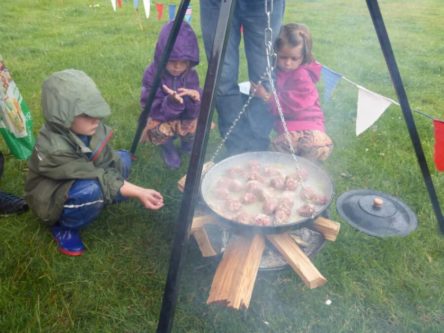 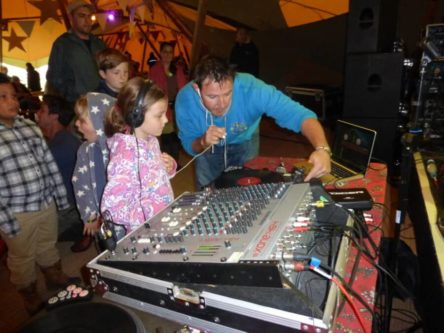 The activities were varied and interesting, and certainly kept the children busy! My children particularly loved the ukulele workshop,  the clay modelling and the storytelling, which kept them enthralled from beginning to end. 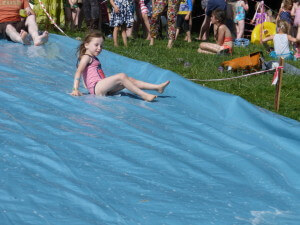 Many of the activities were spoiled by the weather, but there was so many different things going on that the children were never bored. There were a few for older children too – my eldest daughter loved the DJ workshop and she also queued up to do tree climbing with a proper harness and ropes.

The star of the weekend was the huge waterslide (essentially a large piece of plastic on a hill) which people braved  despite the bad weather. I heard there had been some queing problems the previous year that they had fixed with a ticketing system.

For the most popular activities, overcrowding and queing were a bit of a problem (although if you weren’t too fussy there was always plenty to do). For two of the main activities, the Forest School and the Farm Tour, there just weren’t enough places, which meant that even arriving 15 mins early wasn’t enough. We weren’t able to get on the Forest School at all, although we heard it was amazing, and we ended up queuing for nearly two hours to get a place on the Farm Tour, as we just missed getting on the one before and my 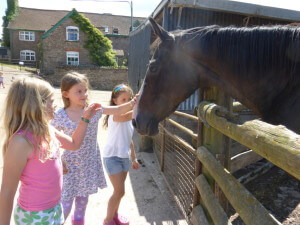 daughter desperately wanted to go. Luckily the family in the queue behind us saw this and took pity on us, and held our place in the queue so we could go to get some food! The Farm Tour was worth the wait – it was a lovely small farm full of piglets and ponies to pet.

I was pleased to see a few adults brave the waterslide, but there was a general feeling that the activites were for kids only which was a shame. For me festivals are a place where I can play with my children without feeling self conscious, and yet some of the activities I was told by the organisers I couldn’t join in with. I realise this was often due to there not being enough space, but in a festival with only kids activities it sometimes let the adults feel a little bored. Fortunately the woodland tribe area was all about participation, so we spent the majority of the weekend there. 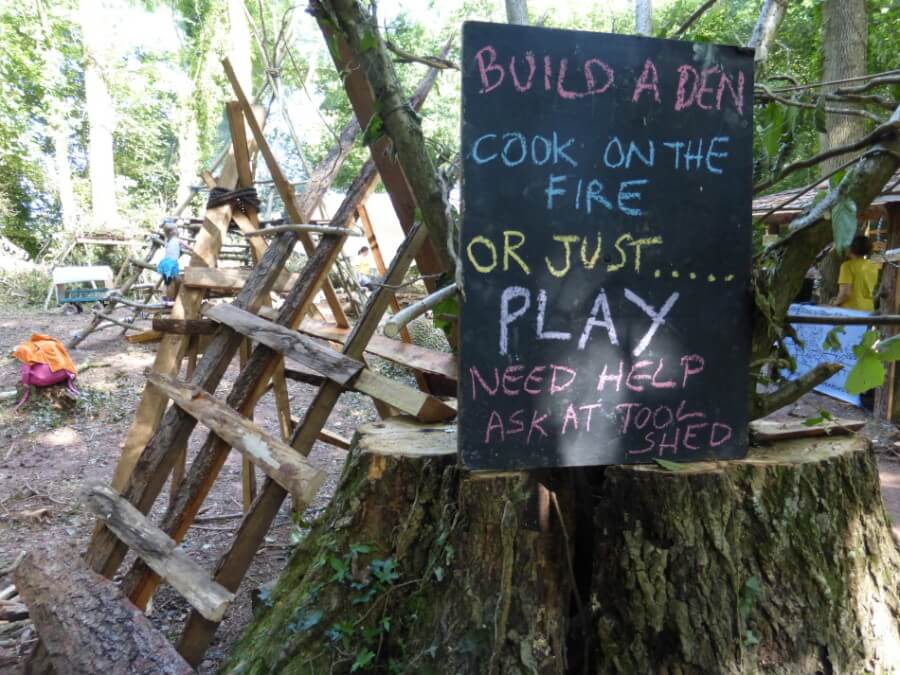 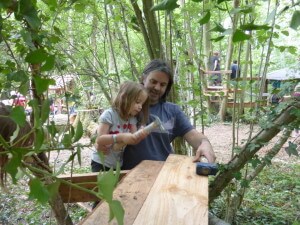 The Woodland Tribe was easily our favourite part of the festival. It was a separate area set up in the trees, and had an area for cooking round a campfire and making fire, and another area for building. You went over to the shack to get hammers, saws and nails and then grabbed some wood and rope from a pile, and then you could build what you liked! Climbing frames, houses, walkways and swings were constructed in the woods by families, with people adding to existing structures, creating a wonderful changing playground through the trees. My family started on a treehouse, and spent hours hammering nails into wood over the weekend. 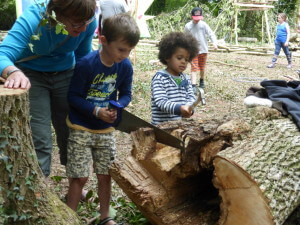 Any parents reading this who think that giving children hammers and nails is a bad idea – maybe this isn’t the area for you! Or maybe it is. I have to admit to feeling a bit anxious at first, but then I realised what an amazing opportunity it was. I’ve never seen children have so much freedom around activities that are usually considered too dangerous for them, and it was a wonderful place for new experiences, and a real feeling of exploration, learning and achievement, when they climbed on platforms they had build themselves! 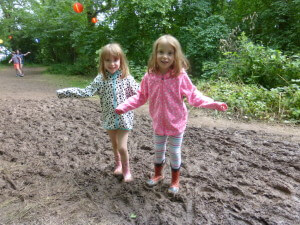 The weather that weekend was some of the worst I’d seen at a festival – with torrential rain for two full days of the weekend, so it was a real test of the organisers’ planning abilities. I always say to run a successful festival in three days of blazing sunshine is an easy thing compared to running one in the pouring rain – and it’s a testament to the organisers of Starry Skies that the rain didn’t ruin our experience at all. True, many people packed up and went home early due to the weather – but this was mainly due to their tents leaking and not the festival’s fault – there was so many activities under cover that there was plenty of space and plenty of activities regardless. They even laid straw down on all the paths so the site was mercifully clear of mud, on a weekend where many other festivals were a complete washout.

The whole family loved Starry Skies, and would definitely go there again. I think they’ve managed to create a unique experience for outdoor loving families such as ourselves – the chance to spend a weekend surrounded by nature, building dens in the woods and toasting marshmallows over the fire. I only hope that next year it doesn’t rain so much that we get a chance to see the starry skies too!