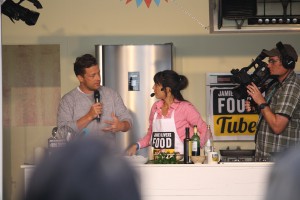 Reviewed by Nikki Payne and family

We love food. And we love music. And we love spending the weekend together as a family in a field. So we thought The Big Feastival would be the perfect combo. And indeed if you fancy a weekend of watching celebrity chefs, in a field, with a side serving of live music and a huge dollop of fete then this is the perfect festival for you.

As you’d imagine, an event hosted by Jamie Oliver, attracted lots of celebrities and brands, was well merchandised, big-hearted (donations to his charities), and had some lovely thoughtful touches. But disappointingly we found it lacked our preferred brand of festival spirit – the quirky, the bohemian creative and the serendipity was missing, And more surprisingly the big idea of food wasn’t brought to life as imaginatively (all consumingly) as we’d expected.

The Big Feastival was hosted on Alex James’ farm in the beautiful Cotswolds. Taking place in two large fields on the top of a hill, it gave you a sense of both space and exposure – affording glorious sunsets, and leading us to prayer (of the please don’t rain variety). Each field had its own perimeter of stalls and tents with tepee inspired bars dotted around the centres, and both fields had fun fair rides (no escape, natch).

The vast majority of guests must have come to see the chefs at work. And once you’d found the (AEG) Big Kitchen there were lots of big names and cooking demonstrations to see.

Our children were amazed and delighted to see and hear Jamie Oliver at work. And although I couldn’t persuade them to stay watching for as long as I would have liked, we all agreed it was a real treat to see chefs so close up. The demonstrations were filmed live and beamed to the back of the tents, so no one could complain of a poor view.

If you wanted something more intimate, you could also squeeze into a gazebo and ask a food guru a question or two. And then of course the ideal your opportunity to meet your favourite chef presented itself at their book signing (in the book store tent). 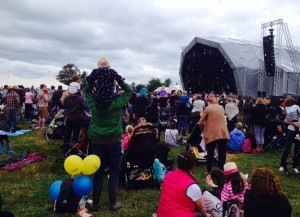 Children, and there were many small children, could join in a couple of cooking activities themselves (if they booked in time and were old enough). Our nine year old particularly enjoyed his session in the AEG Family Kitchen but I could have done without the sales pitch for their latest induction hob.

And it was the ‘sales’ and merchandising that dampened our enthusiasm for this festival. It would be very easy to spend lots of money at the Big Feastival, in addition to the books, there were a myriad of beautifully packaged products, many edible and quaffable or indeed wearable, on sale from well presented little stalls.

More frustrating for us, was many of the children’s activities were hosted by major brands selling or promoting their products e.g Lego, Skylander, Sylvanian Families. A very popular activity was welly throwing (£1 donation per throw), hosted by Joules, where the prize was a pair of Joules wellingtons.

On the whole we felt the children’s activities could have been more imaginative. Don’t get me wrong, there was a lot to do – our son really enjoyed the Change4Lfe (with Disney) rowing and cycling activities, story telling (with Roald Dahl Museum, and Puffin) and the circus skills – but we’d expected food, as the big idea, to be brought to life more thoroughly and thoughtfully. Where were the ‘create your own scarecrows’, or the to-scale-hay-bale-tractors, or the giant Lego cabbages? Admittedly we didn’t get to participate in every activity, and may be we were just unlucky… 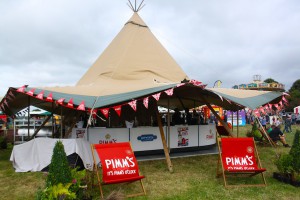 The food offering itself did meet expectations – from bacon rolls with a twist to lobster wraps through to the humble and delicious corn on the cob. And although your could spend £12 on something with lobster you could easily eat for £6.

Similarly the drink suppliers were as diverse – whisky, Argentinian wine, Pimms, cider etc. Although much less choice on more traditional festival drinks such as ales. Next year, it might be an idea to create sheltered hubs for people to sit and eat – not just to sit and drink.

And then there was the music…also fairly diverse but perhaps not given as much prominence as the food (surprising considering the involvement of Alex James). Having said that, our absolute highlight of the festival was Fat Boy Slim – he was amazing and our thirteen year old was blown away by his performance. 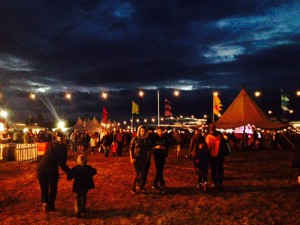 On the main stage the three headlining acts were quite different – Bjorn Again on Friday (much, much better than we could have ever felt possible), Fat Boy Slim, and then Jamie Cullum. But aside from the headliners and the penultimate acts, the crowds for the performers were surprisingly small, and many of the audience remained seated, on their chairs, through out so we got a great view.

The smaller of the two music stages, The Udder Stage, hosting up & coming acts had to compete, unfairly we felt, with the noise from neighbouring bars, and rarely mustered a decent sized audience through out the days. Perhaps the stage could be located somewhere more cossetted to allow the smaller audiences to build a decent rapport with the band.

There were some fun musical gems to be found at The Bandstand – Gospeloke were a family favourite (yes, this was unexpected for us too). But again, they did have to compete with the music from the main stage and other bars.

It was very telling that the crowd for Justin Fletcher from CBeebies was larger than the crowd for Laura Mvula, and definitely more enthusiastic!

Hoards of small children as far as the eye could see meant that all camping seemed to be dominated by families. One sign did decree the field we were in as Family Camping, boasting a fenced off cooking area (studiously ignored by most as they surreptitiously used stoves in their awnings) but everywhere was rammed. We had to ask a security man up on a raised platform to see if he could see a space anywhere for a tent. He found one. Yay. Although it was probably empty because of its proximity to ‘the noisiest children in the world’ (quote unquote our nine year old).

On the plus side there were lovely twinkly lights and a wide mown walk ways guiding you through the camping fields (all on a slope). The loos and showers were clean, and the family camping was well located for breakfast pre-festival opening (although the queues were long whether you got there in a skip and a jump or not). The security guards were very smiley and empathetic no matter what hour. 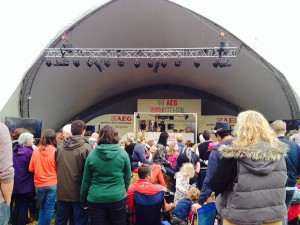 We’ve never seen such long queues for showers so early in the morning (the Big Feastival obviously attracts very clean, early-up people) but by 11am you could have a queue-less hot shower in a very clean cubicle.  There were people quickly wiping down the showers between occupants!

There was glamping – fine looking, orderly rows of bell tents, on a slightly less rolling site and a bit further away from the late night noise (if need be) and yet within a reasonable walking  (or electric buggy) distance. Disabled camping was located right next to the festival entrance, with a wheel-chair friendly path but with its metal fencing it looked more like a holding area than a campsite. The campervan site looked very busy to us, more like a car park than a community. We couldn’t have managed to transport our camping gear from car park to site without the fabulous Mr Trolley which is a bonus at any festival with kids and all the camping gear that comes with them. The pimped up trolleys were in huge demand for the evenings and were all booked up (online) before the festival started so it’s worth noting if you are booking tickets.

In summary, a really great idea, beautifully executed and does exactly what it says on the tin but for us it was too commercialised, not celebratory enough and didn’t have the magic festival fairy dust that we think essential to make a truly pukka (memorable) festival.