First celebrity selfie – tick; first silent disco – tick; first big concert by someone famous (for 7 and 9-year-olds, that is) – tick; first time at the front of the stage among a heaving crowd – tick. The Big Feastival proved to be a big hit with our boys.

The sixth Big Feastival, on Alex James’ Farm near Kingham, Oxfordshire, fell on a gloriously warm and sunny August Bank Holiday weekend and the crowds turned out to bask in it and revel in the fun and frolics.

While we were half expecting to bump into David Cameron or Jeremy Clarkson as part of the Chipping Norton set at Alex James’ annual shindig  in the Cotswolds, we were pleasantly surprised to discover a family festival that spanned the generations with enough varied offerings to satisfy kids, parents and even the ‘silver shakers’ of the family. 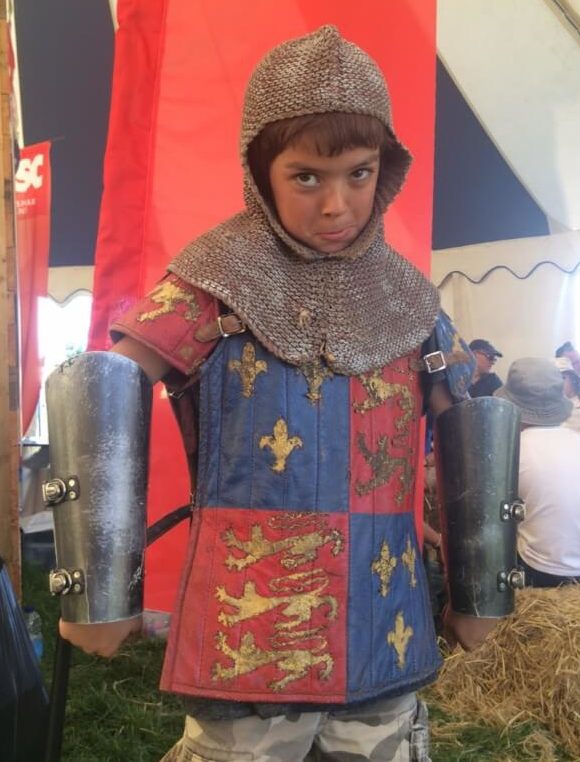 There’s a distinct family day out/local fete feel about the Feastival crowd but at the same time it’s a festival full of big name brands and that’s not just the celebrity chefs. You can pop into the Fevertree area for a gin and tonic or the Veuve Clicquot garden for a glass or two of bubbles but, just so you don’t forget you are down the farm, there are also piles of hay bales around the site – much to the delight of my kids (it’s the simple things!).

It’s a nice layout for a sizeable festival. The camping is on either side of the main entrance, in front of the car parking area. There was also an entrance for those travelling by train, just off the main arena.

There were five areas: The Food Village and Little Dudes kids field; the main arena, the lifestyle village, the Udder field with smaller entertainment tents, and the Village Green area, which was tucked at the far side of the main arena. There was also a huge VIP area that ran the length of the main arena.

Among all this were a variety of bars and tents and food outlets. When we arrived on Saturday afternoon it was really busy with long queues for food at nearly every stall. We decided to wait until the rush was over, which turned out to be a smart move on our part. 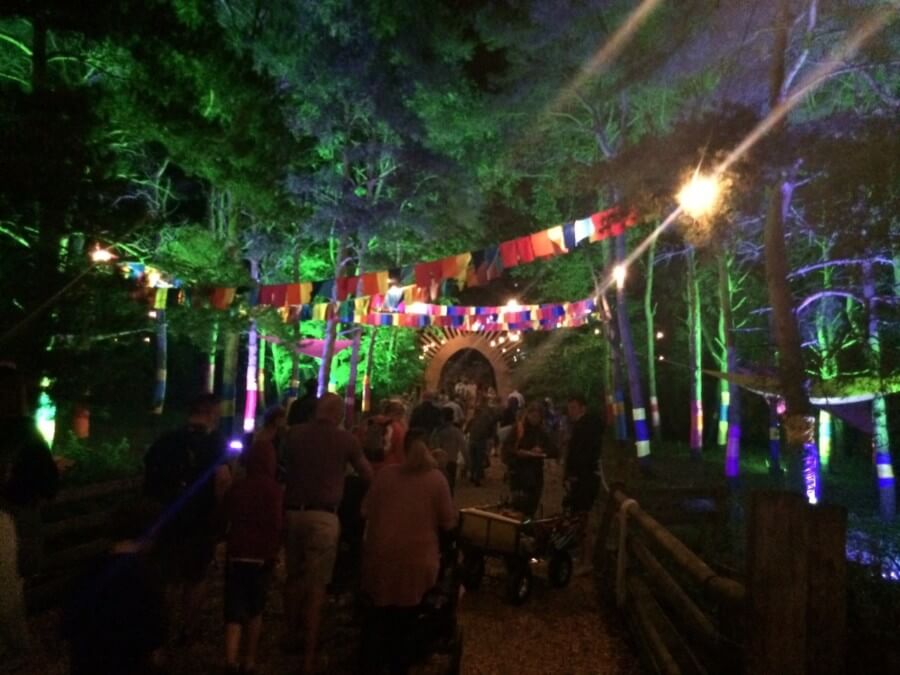 The parking was well organised. From the parking area the campsites were located off the main pathway into the festival. There’s a sizeable campervan area and the tented areas are on even ground. The four fields were named after fruits and each had toilets and showers. Although we didn’t camp I had a look at the Strawberry campsite, which was closest to the fun and had an accessible car park, a breakfast area – with coffee and porridge stalls and posh loos. The luxury toilets could set you back £35 an adult for the weekend for the privilege of using flushing loos and hairdryers and straighteners.

There appeared to be plenty of space around tents and areas where you could pre-book a space as well as a glamping field.

The Big Feastival as the name suggests is about food and for keen foodies there were a number of cookery schools, masterclasses and table sessions. We tried to book into the Neff Cookaholics Cookery School. There were two sessions to sign up for but when we enquired about the 1pm session we were told it was full and people had queued since 11am to get a place. Among the chefs on stage giving demonstrations over the weekend were Jamie Oliver, Gennaro Contaldo and Michelin Star chefs Raymond Blanc and Tom Kerridge. 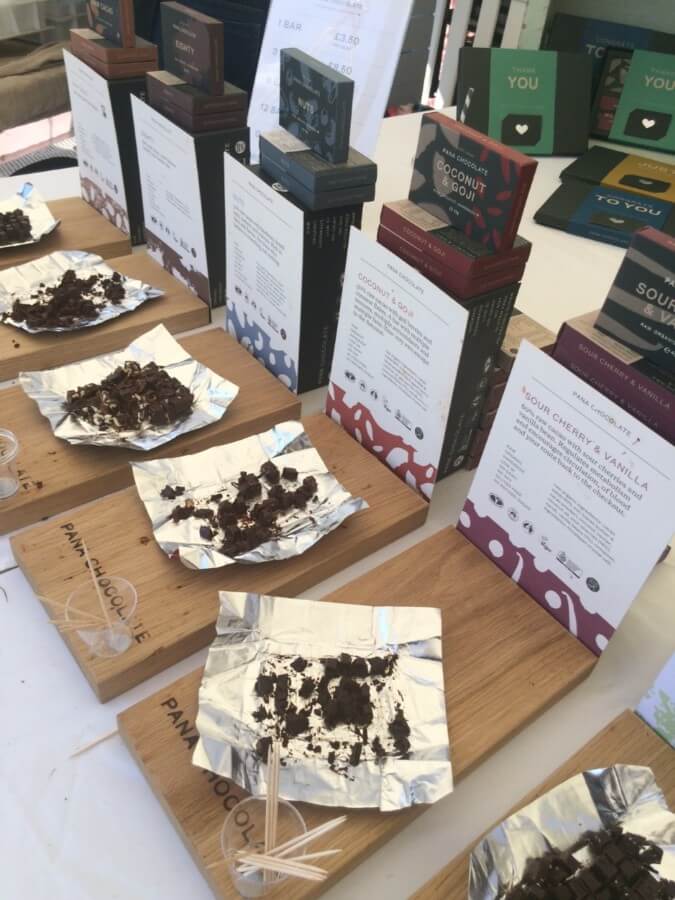 For those that booked ahead there was also the Friday Night Supper Club where the likes of Neil Rankin and Jack Stein (son of Rick) helped prepare the banquet. If you like to combine food and dancing then Alex James’ The Cheese Hub was worth a visit. By day, you can sample, buy and take home some artisan cheeses made at the farm and at night, the place transforms into a music venue with the odd DJ appearance by Mr James himself.

The Fools Tree House stage, located near the main entrance, offered yoga sessions, ukelele playing and hula fun. Nearby was a new area for teens called The Common Room with beanbags, sofas and giant games. The boys enjoyed a few games of table tennis and air hockey while we relaxed on the sofas and beanbags. 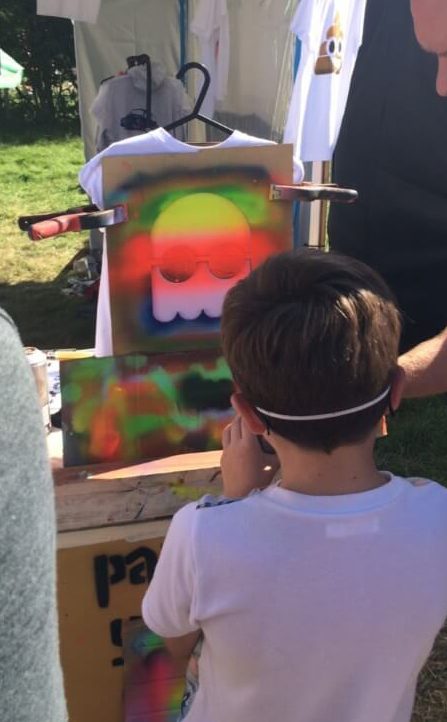 In the  Little Dudes field, the main tent offered dancing, music and storytelling for kids. There was a variety of activities including circus skills in the field as well as the usual face painting (£10 a pop!) and hair braiding. Children could also spray paint their own T-shirt for £7. The Play-Doh tent was a big hit and the Animation Station tent, where children could make their own animation (very popular with our boys) also had activities and storytelling by the Royal Shakespeare Company.

The Village Green, tucked away to the right of the main stage, was, as the Feastival calls it: ‘a celebration of our green and pleasant land combining agriculture, gardening and cooking’. Countryfile’s Adam Henson, who my husband boogied alongside when watching Madness, hosted his own Cotswold Farm with some of his own farm animals. If Morris dancing, listening to poetry,  the Women’s Institute or taking part in a three-legged race is your thing then this was the place for you. 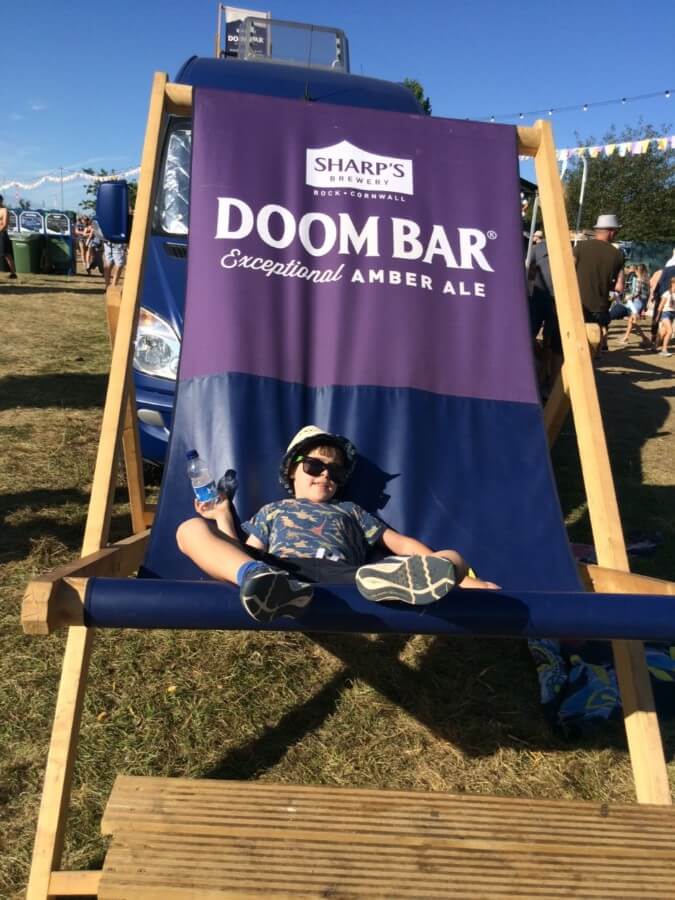 For music lovers there was an mix of genres performing – from Hacienda Classical (a throwback to the Madchester scene of the 1990s) to Soul legends De La Soul, Olly Murs and the likes of Norman Jay MBE doing DJ sets.

The Main Stage was hosted by Radio 1s Jo Whiley with Ella Eyre, X-Factor’s Louisa Johnson, The Cuban Brothers and The Cribs all performing over the weekend. For our boys it was a first experience of seeing a famous pop star live – Olly Murs. For us grown-ups, the main attraction was Sunday night and catching De La Soul and headliners Madness.

Outside of the main stage, The Udder Stage was the venue for The Big Feastivals’ Got Talent. At night it transformed into another family favourite – the Silent Disco. 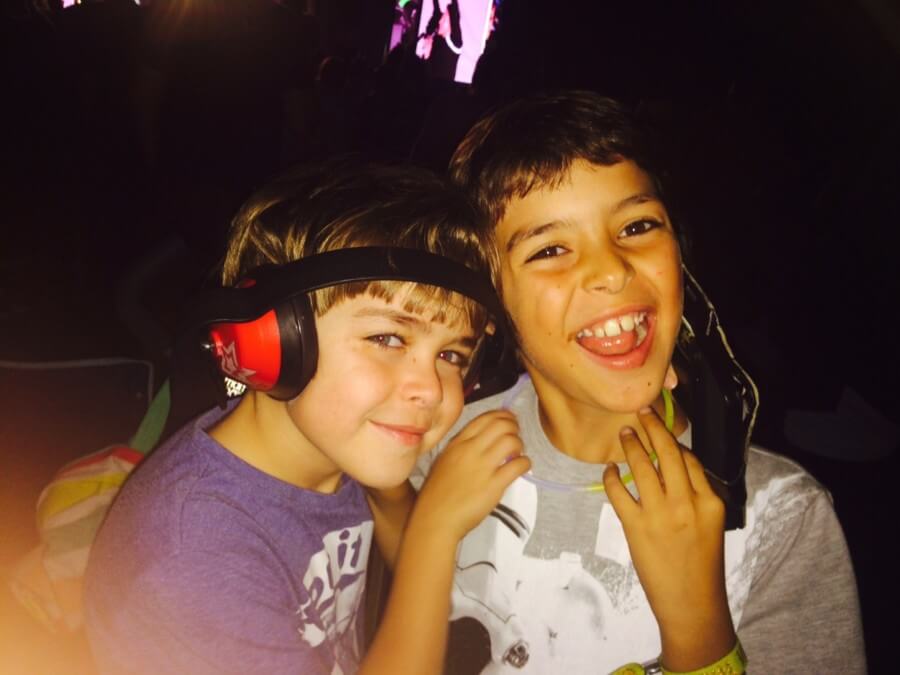 The Band Stand was where up-and-coming talent had a chance to perform. It also hosted kid’s TV favourites Dick and Dom and our boys managed to have their photo taken with the pair. The duo’s gig on Sunday afternoon in the Little Dudes tent  had both parents and kids in stitches.

Near the Little Dudes’ area there were a selection of stalls in the Food Village where you could sample an array of foods and local produce made by small independents producers selling, among other things, chutneys, organic sausages, cakes, chocolate, a variety of cheeses.

Street Food Alley offered a good selection that included: pizza, fish and chips, crispy fried squid, vegan curries, Japanese food including gyoza, and hotdogs but some stalls ran out of chips on Sat eve around 7.30pm. Other fare on offer included Spanish paella, crepes, Indian and Thai. For the coffee lovers there were lots of cafés scattered around the site. And as well as gin and Champagne, the usual offering of cider and beer was plentiful with Sharp’s Brewery and Weston’s Cider.

All the toilets were chemical portable toilets with sinks nearby. The festival site is pretty flat – there is a bit of a slope – but overall it’s good for getting about with buggies or wheelchairs. All the toilet areas included disabled loos and baby change facilities.

A great family festival and, although we didn’t stay over, it looked like it would have been easy to camp. There was enough to keep the kids occupied and the atmosphere was relaxed. You don’t feel like you’re roughing it at Feastival – it’s festival-ing the easy way – posh partying, middle class moshing and glamping all rolled into one. It doesn’t feel too big and with its mix of activities there’s enough to amuse little ones and adults alike. If you after a quintessential ‘English country’ festie, this is for you.