Parent Reviewer: Vashti (with a bump, 2 year old and a teenager)

Kaya Festival is a brand new festival in a beautiful location in North Wales, which was warmly welcomed by myself and other local festival goers used to long drives to reach festivals such as Glastonbury. The musical lineup was a treat for lovers of genres such as reggae, African music and afrobeat, with Lee Scratch Perry, Ska Cubano, Dub Pistols and more on the bill; plus a good selection of local bands. Faenol, a historic estate just outside Bangor, is a gorgeous setting for events, with a lake and rolling fields set against a backdrop of distant mountains; and the festival was small and full of friendly faces. 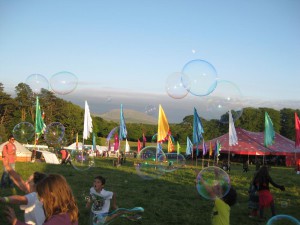 The first outing for Kaya had various issues which could be improved upon for future years; the first being festival information and communication, which was actually initially very good, with a well designed website, and a stream of information via Facebook and Twitter, but dipped just prior to the festival. Details such as site maps and programmes were released very late – which may have been due to hitches behind the scenes – but made final preparations a bit more difficult. On site, signage and site maps could have been more in evidence, to ensure festival goers found all the things available; and announcements need to be made from stage in the event of main acts not appearing (it happens – I once waited to see Afro Celt at a London festival and they never showed up – but audiences need to be told!).  More clarity would have also been helpful on the first day, when people had to wait in sweltering sunshine for several hours beyond the promised time for the site to open.

The main aspect of the festival which was widely praised by my friends (and in online feedback) was the music, and local people particularly appreciated the opportunity to see such a great lineup on their doorstep. Lee Scratch Perry, Dub Pistols, and local bands such as Drymbago, Celtic Cowbois and Bandabacana apparently all went down well; and I enjoyed the DJs on the main stage on Friday night as I wandered around site with my toddler. The Friday evening was probably my favourite moment of the weekend; with a sunset glow over the site, bubbles drifting everywhere, excellent tunes playing, and smiling faces. 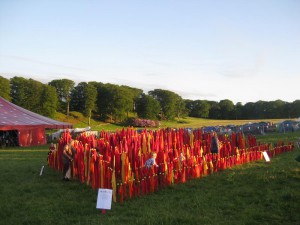 As I was at the festival with a two year old (plus bump – I was just over halfway through my second pregnancy at Kaya) – I didn’t see very much music! My son had a lovely time chasing Dr Zig’s Giant Bubbles, and going round and round the “Flaggyrinth” (a labyrinth of flags), and exploring the lovely garden in the Healing Field. There were also circus activities led by Syrcas Circus. Although we enjoyed ourselves, there seemed to be less children’s activities than the website implied. Maybe in future years a cordoned off Kids Area with a sandpit would be good (inspired by the fantastic Kidz Field at Glastonbury)?

Other areas for improvement include the range of stalls – there were not many food stalls and only one (Moel Faban) seemed to have much in the way of vegetarian options. This was problematic given that campers had been told naked flames were not allowed on site, and were expecting a good selection of hot food. I remember another small festival I attended had a similar problem with insufficient food stalls in the first year, and the situation got much better after they acted on feedback. There were also only a small selection of general stalls – there were some nice unusual items including masks, and more African and reggae themed stalls than I have seen at a festival before – but I felt there was room for more clothes stalls.

The strong African / world / reggae flavour to the music, stalls and food was an inspirational focus to the festival, reflecting the “world music, world food, world love” message of Kaya; I enjoyed this aspect very much, and look forward to seeing this angle develop further in future years. It was a shame that we had poor weather on Sunday as there was a carnival procession planned and I love parades – I’m not sure if this took place as I took my bump and toddler home for the day to keep out of the rain – one great thing for me about the festival was being located so close to my home comforts!

I think last-minute issues behind the scenes affected the site layout, so am hoping in future years that festival organizers listen to the feedback about camping and try their best to locate tent campers closer to car parks (or lay on festival transport to help carry belongings) – a lot of festivals seem to have a long walk between parking and camping, which is no fun for anyone, particularly parents with young kids and lots of stuff! We were lucky enough to be in the camper van field, which was blissfully quiet at night, but a little far from the action. Ideally next year, a quiet camping area not too far away from the main arena will be provided both for people in tents and for people in camper vans (tents were right by the main arena this year), as well as of course a camping area right in the action for those who enjoy that! 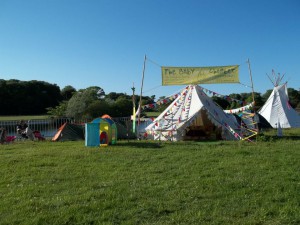 Something did impress me and showed that the organizers are listening to suggestions: Prior to the festival, a conversation developed on the Kaya Facebook page about facilities for parents of babies, and I suggested that breastfeeding and nappy changing areas might be one issue to consider. Kaya responded promptly by booking the Baby Chamber tent to provide these facilities. I know some friends with young children made use of this tent, and hope it’s booked again!

I’m hoping my review is a fair summary of the experiences of some festival goers, particularly those with young children, and will be read as constructive suggestions rather than with negativity.  There was a lovely friendly atmosphere at the festival, the security and stewards were pleasant, and with the size and location, it has the potential to be a lovely festival for families.  It’s important to emphasize that this is just one perspective, and I should note that my teenage stepdaughter – who was able to have a more traditional festival experience hanging out with friends and listening to bands had a really great time, as did many of my friends. When you spend a whole weekend chasing a lively toddler around a field, you miss a lot of the festival!

I’d like to thank Kaya Festival for a lovely weekend, and acknowledge all the hard work that went into festival preparation; I really do feel that the organizers have good and genuine intentions in creating this new festival, and appreciate as an event organizer myself (part of the team organizing a large Halloween event) that doing these things is exhausting and a huge learning curve!

There is a great deal of goodwill and enthusiasm locally for this new venture, and I hope the various feedback they received will be taken in good spirit to improve the experience for next year’s paying punters.

I certainly intend to take my son (and new baby) along next year, and who knows, maybe I’ll even see some music! 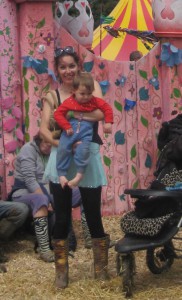 Vashti has a two year old son and a second baby on the way, and her boyfriend has a lovely teenage daughter from a previous relationship who has been in her life for nearly a decade. Vashti has been going to festivals for 20 years, ranging from Glastonbury to smaller events; and in the last couple of years she’s moved from dancing to wild festival bands at 3am to sitting in sandpits and chasing bubbles with her son.

Vashti is part of a team who organize a Halloween event in North Wales called Fright Night.  She also recently organized several kid friendly DJ afternoon events under the name Magic Carpet Soundsystem, together with her boyfriend and friends. She loves parenting, writing stories, babbling rubbish, and dancing at festivals.