Timber is a small, yet beautiful festival, nestled in the National Forest in Staffordshire. I was so pleased that our family were able to return to Timber’s second year.

The site is impeccably clean, there is open space to wander around and it is strangely peaceful! Not something that I expect at a music festival…

When we arrived at the wristband point, we were greeted by a cheerful sign that shows that cyclists are welcome at this festival.

The festival encourages people to cycle to the festival and it is possible to arrive via a guided cycle tour with Red Fox Cycling. For £45 they will transport your equipment to the campsite and give you a lift home at the end of the festival.

We followed the path into the woods and went into the first area, called As the Crow Flies.

In this area is a campfire with storytelling and singing. There were glowing puppets. including an owl that seemed to fly through the woods, and a cat playing with a sleepy toddler in her festival wagon.

As we walked down the hill towards the Halcyon Days area my son was delighted to see an array of giant board games. We had a great time playing Guess Who and climbing onto the huge dice.

We saw other families playing Ludo (where each person is a meeple moving around the board), giant Tiddlywinks and a huge Scrabble board.

There were large ropes available which led to spontaneous tugs of war and skipping contests.

After climbing to the viewpoint at the top of the festival, there was obligatory hill rolling to be done. I saw a mum with a toddler on her chest giggling as they rolled down together.

We headed to the Woodland disco at the Eyrie Stage, where a DJ played on an elevated wooden platform. It was a great laugh dancing to indie, Northern Soul and ska classics.

It was particularly fun when the CanCan started to play and some boys were having a contest to see who could keep dancing for longest without stopping.

In the main field we watched Stealing Sheep play. The site has had a few changes this year, so the stage was in a different location and was now a covered tent.

This led to an amazing view of the band and a good atmosphere. However, it’s worth noting that that the sound is louder and it’s a good idea to bring ear defenders for little ones.

On Saturday, I was able to walk straight into to the hot showers at 7am which, a good start to the day! It rained a bit in the morning which caught a lot of us out, as it hadn’t been forecast.

My son and I spent some time in a large National Forest tent, where photographs of the festival uploaded to Twitter were converted into a huge jigsaw of the landscape. It’s lots of fun to place the stickers in the correct places and see the picture grow over the weekend.

We found a tiny bookshop called ‘How brave is the Wren’, which is inside a converted vintage caravan and packed full of beautiful books. It was a difficult decision to choose one book and we ended going back there the next day to buy more!

Inside a micro-theatre, a tiny metal pod on wheels with space for only 6 people at a time, the Talking Birds put on a brief yet impactful show about the seasons.

Undeterred by the rain, we decided to go to a hip-hop dance workshop and join the ukulele chorus around the campfire. Within the space of an hour, Gacko had forty people playing ukuleles, including chord changes, which culminated in us singing a Hawaiian song to our audience (an unsuspecting family who were collared as they wandered through the woods).

You can also take part in a forest school, archery, and in the “hair in a handcart” area have your hair styled and decorated with local greenery.

The small size of the festival means it’s very easy to return to your tent/camper van for a rest, and this allowed us a couple of hours to rest, reading our new books, before going out for the evening.

Bring insect repellent if you are going to the woods at night!

We enjoyed watching The Forest of Dreams, an immersive theatre experience reimagining Little Red Riding Hood to explore themes of survival within a forest.

After a lighthearted start, the story uses lifelike puppets to the tell the story of a refugee who’d been forced to live within the forest in the hope of a better future for his family. They put on different shows which include themes suitable for little ones, families and older children.

We watched Baron In the Trees, a romantic fable performed by the Lost in Translation Circus. The show includes fantastic singing, an array of instruments, acrobatics, juggling and rope skills/trapeze.

After the show we wandered over to the Field Notes stage where we came across Robert Maseko and Nu Beat.

The crowd had a fabulous time dancing to the joyful beats of Congolese Rumba, with lots of children (and grown-ups) dancing, hopping, wiggling and spinning!

On Sunday, we decided to look at the quieter parts of the festival, including a Coppice Maze. At the MET office tent my teenage daughter enjoyed discussions of meteorology and climate change, wildlife printing with Extinction Rebellion and a giant marble run made out of carved rhododendron.

Not many meals were specifically for kids, but there’s a good selection of child friendly options to choose from. Meals are reasonably priced from £5 for a hot dog, £7 for a vegan wraps, £6.50 for a cheese and bean toastie and £7-£9 for pizza. Tap water is freely available around the festival.

Alcoholic drinks are served in a tipi by Tollgate Brewery, a local craft beer company. A great range of locally produced beers and ciders are available (around £4.50 per pint).

Non-alcoholic options are available, including a speciality chai tea stall (£3.50 for an iced chai tea which was heaven on a sunny Sunday afternoon!) and iced latte for £3.50. And if you fancied a non-alcoholic cocktail making workshop, by Seedlip, you have to book in advance.

On Saturday night Perfectly Edible hosted a Binner Party. It is made entirely of food which would have been thrown away by supermarkets. Not surprisingly this event booked up quickly before the festival had started, but it’s something I would love to try another time.

There are lots of healthy options available including energy bars, flapjacks and a smoothie bar.

The forest included undulating hills, yet I saw lots of babies in pushchairs and several wheelchairs. I was very impressed to see mobiloo, a fully accessible space with a hoist, changing table, and toilet. We saw several festival goers with learning disabilities enjoying the festival and as it’s so peaceful and spacious, it is an ideal setting.

The festival is ideal for babies, toddlers and younger children.

There are lots of opportunities for woodland exploration, puppetry, making fantastic creations in Cardboardia and taking part in the forest school. There are also lots of weird and wonderful things going on, such as dancing tea ladies, and a man playing a double bass on top of a bicycle.

This festival is probably best suited for primary age children. However if you have an older child who is interested in geography, environmental issues or ecology, there are lots of fascinating talks available. There’s also a woodland cinema from 9.30pm.

Timber is a beautiful little acorn of a festival. It is relaxing, informative and beautifully maintained.

I hope more people hear about the festival and it continues to grow and develop, much like the newly planted forest which surrounds it. 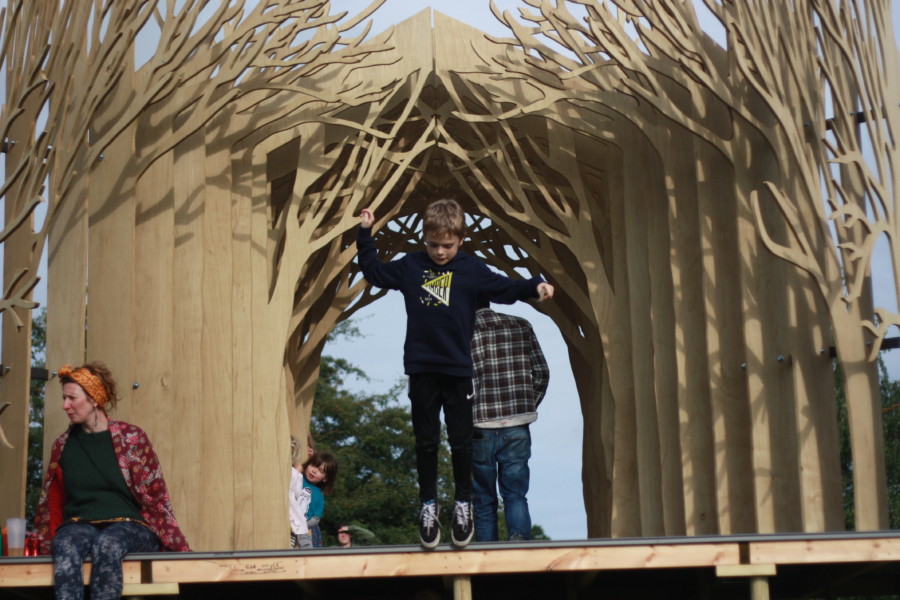