Wilderness Festival… Where the wild things are…

Review and pictures by Vicky Lane

This was our second visit to beautiful Cornbury Park the home of Wilderness festival. The organisers really couldn’t have found a more perfect place to have a festival. We were so excited and so grateful to be invited back after discovering what felt like a wonderful secret last year.

In a slight change to last year, this year the gates opened on Thursday afternoon rather than the Friday. Although family tickets had sold out this year, rather than make a larger space (or keep it as it was last year), the family camping was moved across the field, into what felt like a smaller area, to make room for the boutique camping.  Sadly, this resulted in the family camping area being completely full by the Friday morning and the area being very short of space and play areas for the children.  The only space for the children to play in the campsite by Friday night was next to the toilets. This seemed such a shame, especially when you could see so much empty space in the field along a bit which was reserved for Disabled parking.  I counted just 18 cars in the virtually empty field. Maybe by Saturday some of that field could’ve been opened up for more camping, or at least somewhere for children to play?

There were plenty of toilets and showers in the area but the showers were not great.  I’m not bothered about missing out, us festival veterans remember when showers were very much a novelty at festivals,.  However, if you are going to have them and advertise them, at least have them working!  Speaking to people in the shower queues, many families told me they they were either not working, cold or incredibly dirty.

Anyway, enough of the minor niggles, the plus side to the camping being somewhat squashed was that it made us spend more time away from the tent and out and about checking out all the great things going on at the festival! 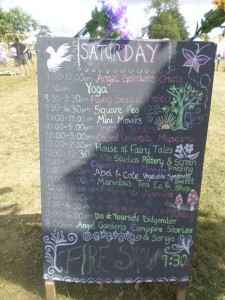 The Kid’s area is great at Wilderness. You can pretty much spend all day every day there and be thoroughly entertained. It was a real struggle to get Dylan away from it to see anything else.

The Flying Seagulls were back, much to the absolute delight of Dylan. He adores Bash (the leader of the Flying Seagulls) and has informed me when he grows up he is going to join Bash and the circus!  What better a role model could I wish for? a clown, circus master, pirate, musician, charity worker and all round gentleman traveller, the rarest of men, a truly free one…  They had the children enthralled and captivated – it really is a joy to watch.

Another main attribute for making the kid’s area the magical space it is comes from Angel Gardens. Angel and her team create so many of the special activities going on there, from craft workshops and making bath bombs in the day to story times and fire shows in the evening. Dylan is not usually one for sitting and listening to stories, so it was so lovely to see him sitting himself down to listen open-mouthed to the story of Oliver Bear – such a lovely story with great actions and even a paper bear at the end of the story to colour and take on journeys (which you can share on the Oliver Bear website).

Angel also organised for Ned the kid’s Dylan to play around the campfire for the children, a 12 year old singer song writer, more used to playing to adults and large crowds than a small group of children.  He was brilliant and so lovely for the children to have the chance to see someone up close playing that not only plays incredibly well but writes his own music. If you ever get the chance to see Ned play you really must.

The Unicorn Theatre were based in the children’s area but the mission for the children was to find the unicorns spotted around the festival. I loved this idea – it gave parents a chance to have a look in other areas other than the kid’s area with the excuse of looking for unicorns! All you need is a pair of Unicorn-spotting-specs and most importantly, you need to believe!

‘The House of Fairy Tales’ had workshops and structured review gathering for the daily online newspaper and a daily show at 4pm. On the Saturday it was a strange green octopus/ alien creature which the children went crazy for. 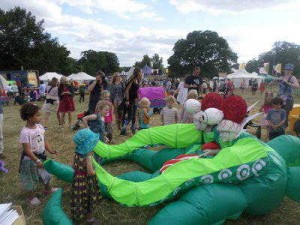 Just below the main stage and past the cricket ground was a tiny area which us adults would easily mistake for a small garden rockery. This tiny patch of rocks and grass was  a complete fascination to Dylan and many other children. Hidden beneath rocks and shrubs were fairies and pixies. Little doors to knock on, small ponds and dragons with eggs, signs and poems led them to look around it for more secrets. Dylan must of spent the best part of a hour poking around in this tiny area, just goes to show the smallest things can capture a child’s imagination.

Whilst Dylan poked about looking for fairies, we enjoyed the cricket. A really popular part of the festival and so it should be, I understand very little about it but they make it funny and entertaining.  I loved it when rain stopped play (2 ladies running on with watering cans and watering the pitch). Just relaxing and watching in the sun is heavenly. 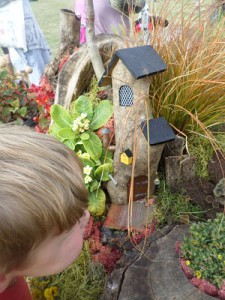 Saturday afternoon we headed to the lake all prepared to take a dip. Although very beautiful, it was far too busy when we went.  Maybe we just timed it wrong but it was not really what I had imagined it to be, again a lot busier than last year.  The Spa Area looked divine, but was totally closed off of course unless you had paid to be in it. As with the family camping situation, I again felt we where looking on and at another area wishfully thinking we were in it!

Wilderness takes pride in having a wide range of food and drink and the food we had was lovely. We had a really tasty paella from Paellaria near the main stage.  I could’ve eaten dishes of it, it was one of the best paellas I have ever had. We loved the pizza idea in the kid’s area with pizzaface: children could make and cook their own pizza and enjoy eating it after all their hard work. It was lovely to see flour going everywhere and excitement over the end result.

I would have appreciated a few more options for children’s priced meals though. Food was between £6-£10 a meal, so we tended to try and share to keep the costs down. We did find a place in the kid’s area doing yummy waffles and hot chocolate for £5. There were lots of really good bars on site and people walking around selling pints of lager so you didn’t even need to move to get a cold beer!  Upwards from £5 a pint is certainly not cheap though, but you do of course have the wonderful option at Wilderness to take your own drinks pretty much wherever you want.

I have to confess we were pretty rubbish at catching much of the music on the main stage this year.  We listened from the kid’s area and enjoyed what we heard, but I insisted on seeing Melodys Echo Chamber and was not disappointed with the beautiful music.  They sounded amazing and really looked like they loved being there.  Whilst we listened, Dylan and a group of children played over to the side on a emergency exit sign, all very happy to play whilst we enjoyed the music. 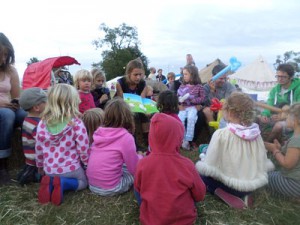 Straight after was Tom Odell.   I went down the front to watch Tom and left the boys watching at the back.  I thought he was brilliant, he had the whole crowd, smiling, singing and swaying to his beautiful voice. After Tom had finished we headed back to the tent to get some warm clothes ready for the big event of the evening.

All weekend Les Pepones had been rehearsing  and teasing us with bits of their show,  Dylan was so excited. Hailing from the famous circus city of Toulouse, it has become one of the most talked about trapeze shows to emerge from Europe in recent years. A comic tale through breathtaking swings, catches and somersaults all to swing music. With a cast of nine ‘voltigeurs’ and ‘porters’ performing the hour-long show thirty feet above the audience it was an incredible show and the children loved every second of it. Definitely a highlight of the festival for us.

When the show finished we went our different ways, Mr Lane went off to watch Rodriguez on the main stage.  I would’ve loved to have seen him too but Dylan and I went to watch the Angel Gardens fire show in the Kid’s area instead. We’ve seen a few fire shows this summer at festivals but this one was the best we have seen: children clapped and cheered with delight and it was a really special moment being cuddled up to Dylan watching.  I cannot thank Angel and her team enough for making such special memories.

So to sum Wilderness 2013 up, I would first ask the organizers to please not make it any bigger and if it must stay at the size it did this year then please look at the family camping. It has to be in a bigger area next year and please look at the parking – walking that distance from the car park up and down hills with families is really hard going.  If it hadn’t been for Mr Trolley I do not know how we would have managed, his team were so helpful and kind in providing the trolley for us to get to and from the car. You can hire the trolley’s over night and your little ones can have a snooze and keep warm whilst you enjoy the evening. We would of been lost without the trolley to get us to and from the site this year.

If I had any suggestion for change next year maybe look at the amount of ways in and out of the kids area to cut down on people trying to use it as a short cut, it was very easy for little ones to wander off out of the area due to it being open both ends.   Apart from that the area is perfect and you really could spend the whole weekend in it and be thoroughly entertained.

One thought on “Wilderness 2013 Review”