‘They’re not like they used to be’ – something we hear a lot at FestivalKidz as we get older. Parents reminisce about the ‘good old days’ of festivals.

Before sponsorship took over. Before you needed to take out a bank loan for a pint at the bar. Before the music made your ears bleed. Before the word ’boutique’ found a place in a field anywhere.

Beautiful Days festival remains true to its roots and is set firmly in the ‘good old days’.

Set at Escot Park in Devon, this is a stunning location but does seem to suffer from its own famous micro-climate challenging the festival name. It had been 10 years since we’d visited this festival so we were keen to see how it had evolved over the years.

We arrived around 7pm on Thursday and thanks to the fantastic organisation of this medium sized festival we were quickly set up. No long lines or waiting really makes a difference with kids and for a festival capacity of around 16,000, the efficiency was excellent. Our pitch was in the crew camper van field and we were helped to park by a couple of friendly staff close to both toilets and posh wash showers.

There’s a dedicated crowd of festival guests who return year after year to Beautiful Days making this a sell-out festival well in advance of the event. It’s proud of its no advertising or sponsorship ethos but does make up for the lack of revenue from this with plenty of market traders. If you aren’t keen on pester power from the kids then this may present an issue. The vast array of around 50 stalls selling general festival clothes and jewellery was a bit much with our 10-year-old. She loved all the stalls but it became an expensive festival for us with the inevitable ‘no more’ causing upset at some point each day.

This is the first year we’ve taken our 6-year-old to festivals without a pushchair so we wanted to be as close as possible to the festival. There are several campsites, some which are a good 15 minutes from the music where you can opt for more quite spots so it’s worth considering this and pitching wisely.  The site is really pretty with lovely views and several ancient trees offering shade. I saw several families with wagons but due to the uneven ground I’d recommend an all-terrain 3 wheeler with little ones.

We asked to pitch as close to the festival as we could as wanted to avoid the long steep walks home. As the weekend went on I regretted this. The noise went on well past 3am every night and we ended up bailing on Sunday as couldn’t stand another restless night.

Unfortunately you can’t pick your neighbours on a campsite and we inadvertently pitched right next to a late night crew tent and loud sound system. Reggae, drum and bass, and even the wonderful Lionel Richie at 4am is going to keep even the drunkest of parents awake. With most kids getting up at 8 there wasn’t much time to sleep. Note to self for future: check what’s inside any marque you camp next to. 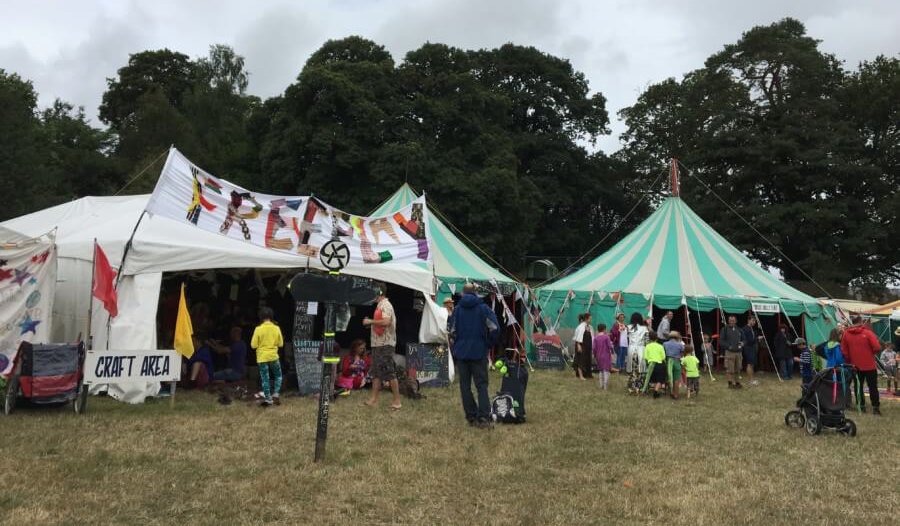 The kids absolutely loved the craft tents. Beautiful Days has some of the best free activities we’ve seen at festivals. No matter what time of day we visited the extensive kid’s area there were several different free craft activities on offer. We found it hard to tear the kids away.

At 6 and 10 we were able to give them some freedom but felt the festival was a little too large to let them roam all day on their own. There is a very safe feeling at Beautiful Days and it feels more like a country fair than a big scary music festival. 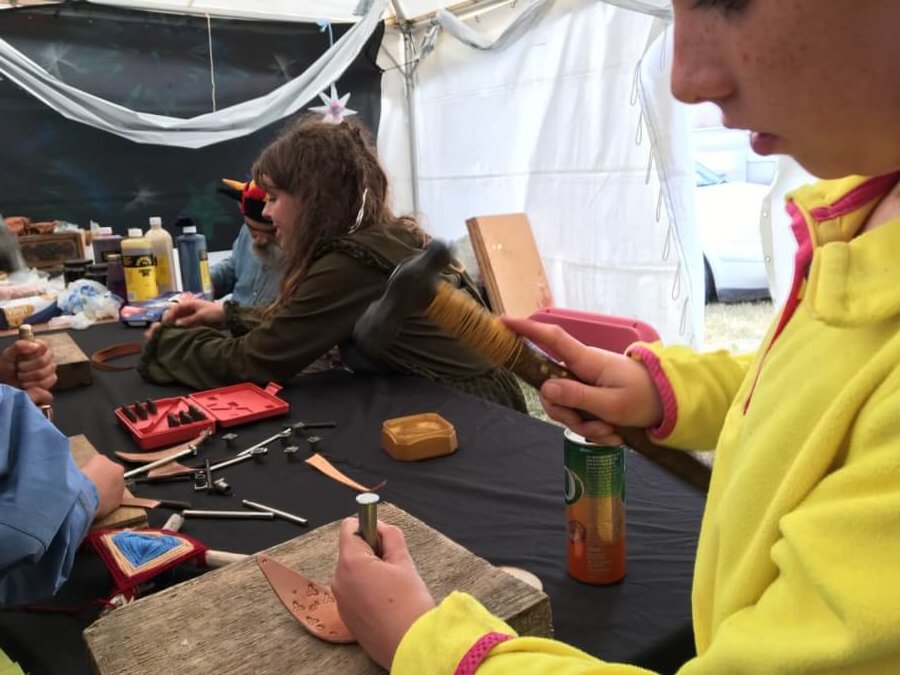 The girl’s favourite activity was the traditional leather craftsman who showed them how to create lovely bracelets and key rings. We were really impressed it was free as we’ve seen costs of up to £10 for these workshops at other festivals. They could have stayed all day making things in the craft areas. Alien spaceships, wooden mobiles, dream catchers and musical instruments including brilliant saxamaphones (as they named them). We went home with a van stuffed full of new creations. Thanks to all the excellent crew of patient helpers. 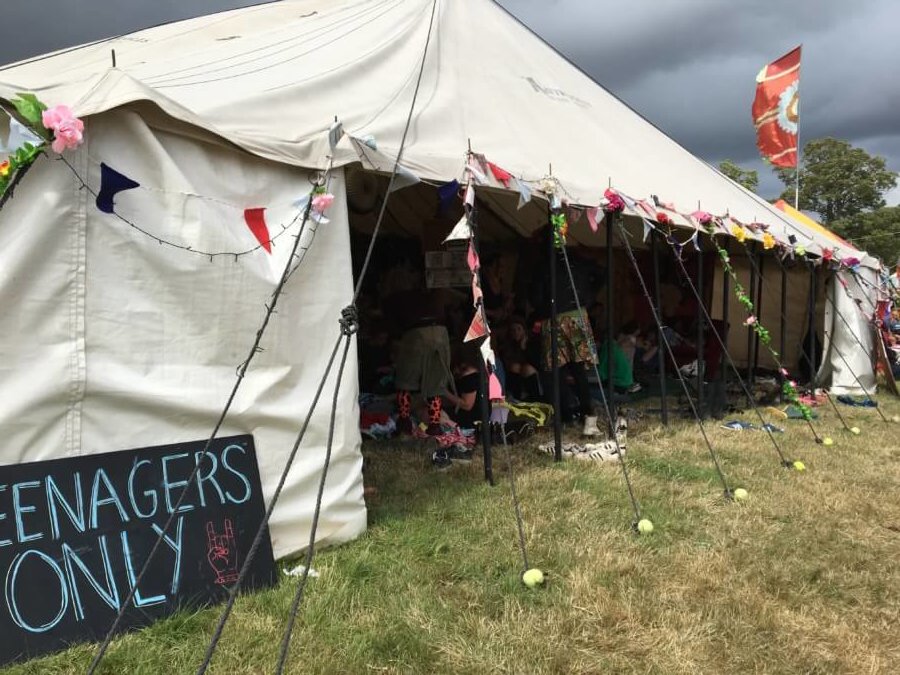 Other activities in the kids area were circus skills, drama workshops, a toddler area, and plenty of great walk about theatre. A teen only area is provided (which we were quickly ushered out of). 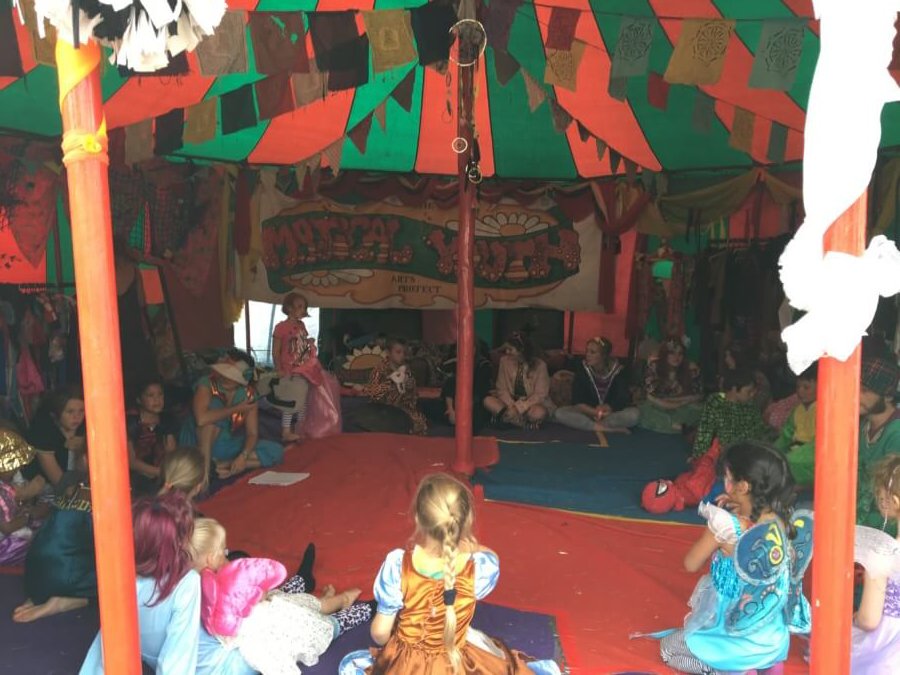 For me there were too many fun fair rides and paid side show activities at Beautiful Days. As a parent on a budget, I’d prefer not to fork out another £20 a day on unnecessary activities.

There was a charge for swing boats (£1.50), trampolines (£2), the big wheel (£2 each – no single riders), and various other hook-a-duck style fairground stalls. You could even smash up some old crockery for a couple of quid if it took your fancy.

We don’t mind a ride or two but we’ve found most of this additional expenditure is unwanted by most parents. 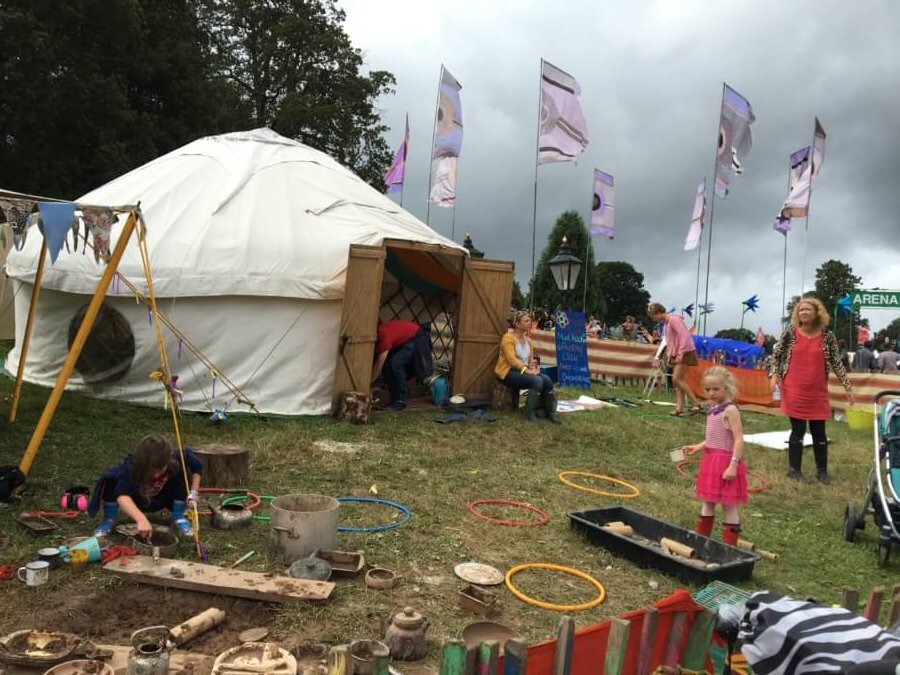 The kid’s area was sandwiched between one part of the festival (The Big Top) and another (The Main Stage). It’s very busy and could be quite hard to keep an eye on really little ones. 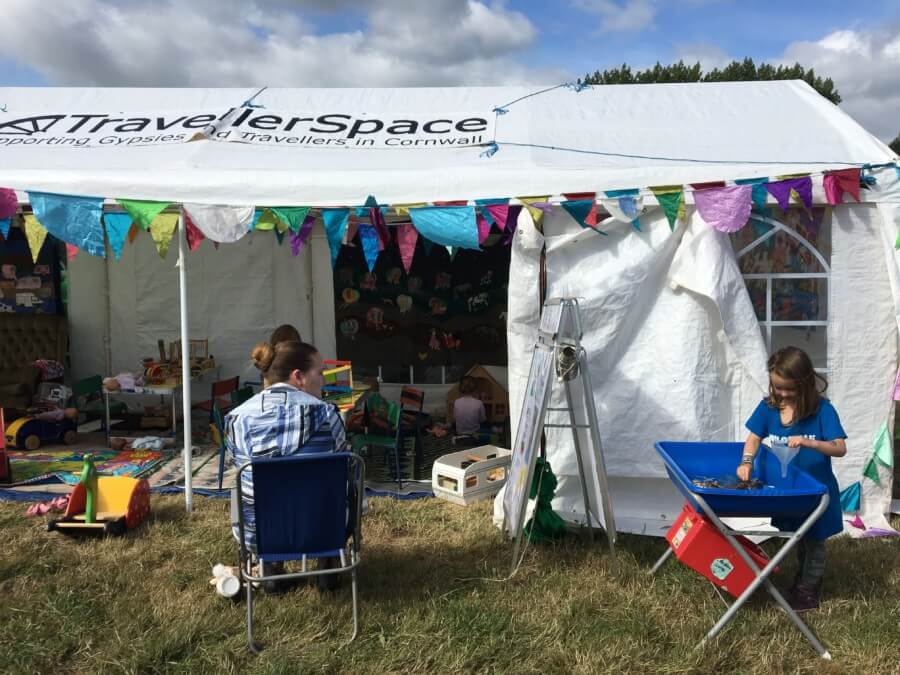 Set at the bottom the main camping field were several tents to keep the kids busy including a book nook and the traveller’s kid’s tent with various preschool toys and activities.

A free giant bouncy pyramid, located next to the normal bouncy castle (£5!), was opened for a few hours each morning and afternoon.

There was plenty for the kids to do elsewhere and several climbing frames and circus toys at different locations. 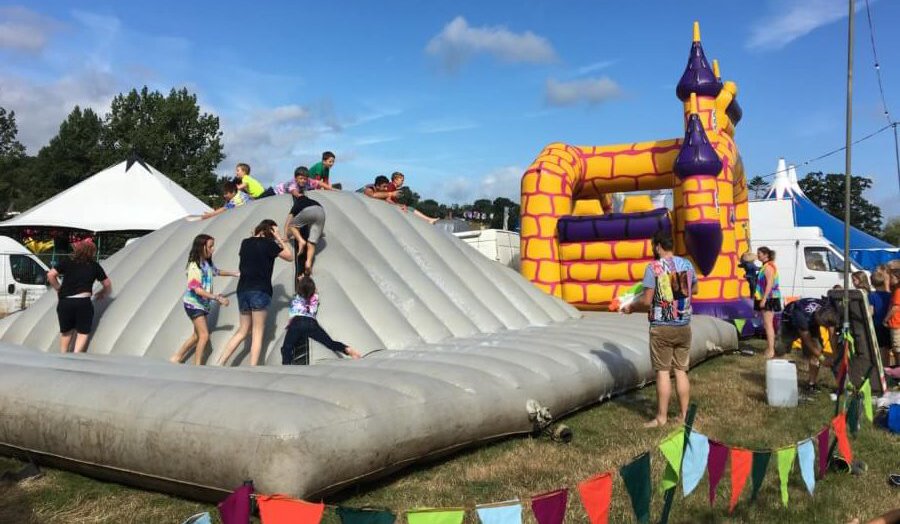 Beautiful Days has grown somewhat in the last 10 years but still keeps the village fair feeling. The six stages are the Main Stage, The Big Top, The Little Big Top, The Band Stand, the Theatre Tent and the fabulous The Bimble Inn.

Festival founders, The Levellers perform twice over the weekend. Opening the festival in The Little Big Top with an acoustic set (which there is not a chance of getting anywhere near with kids), and then again on the main stage at the end of the festival. As always, they put on a great show and drum up a magic festival vibe.

Our favourite venue has to be The Bimble Inn with a great line-up of music all weekend AND a fantastic bar and crew. 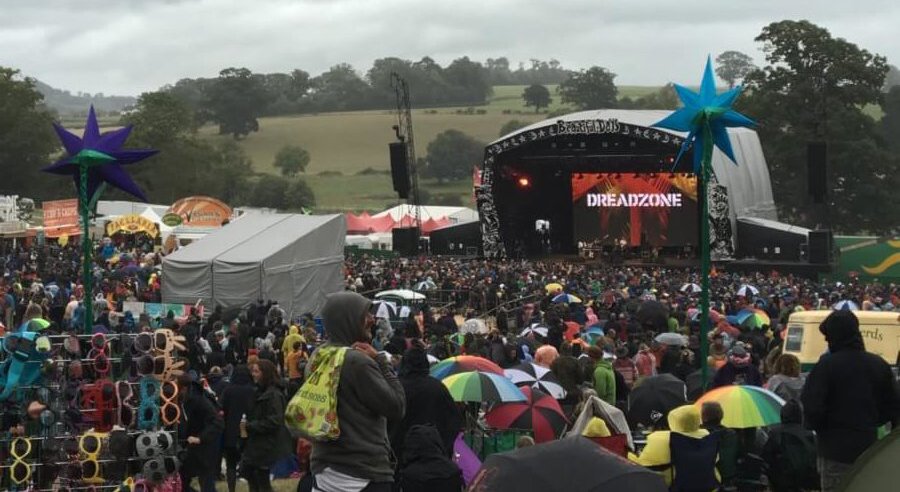 Musical highlights of the weekend were the awesome Dreadzone taking us back to our youth, and the unstoppable Gentleman’s Dub Club. We LOVE you!!

Beautiful Days is a big drinker’s festival. That’s not to say people are rolling around plastered but at £3.50 a pint it’s rude not to get stuck in. The bars were plentiful and there were heaps of local brews to sample.

Food is slightly below average festival price. The kids had fish goujons and chips for £4 and adult meals were around £7. There was plenty to choose from with everything from paella to pie and mash plus a few junk food stalls including doughnuts and sweets.

A big part of Beautiful days is the large seated theatre tent. We enjoyed several kids’ shows here and the end of some great comedy on Friday evening.

We tried to see more comedy on one of the other nights but were told it was far too rude for kids and asked to leave. This was slightly disappointing as our kids love theatre and comedy and I’m not sure why everything couldn’t be family friendly.

Each morning the younger kids were entertained by the brilliant Rob Pudner of Entertainingly Different with the high octane Rise and Shine show. Such fun seeing all the little ones of stage. Even the grownups got involved.

On Sunday we watched a beautiful performance by Makeshift Ensemble of the idiots guide to owl and pussycat. A really touching show that the kids adored.

Facilities at Beautiful Days were good and kept clean and serviced. There was a problem with some of the showers over the weekend so we saw long queues. But who needs a shower anyway?

A good effort was made to separate rubbish with recycling bins across the site. We struggled to find general rubbish bins in the campsite though so there were a few piles of waste starting which seems to escalate into everyone giving up. It was upsetting to see so much rubbish in some areas of the campsite and groups of teenagers literally camped amongst all their waste. Sadly a sign of our throwaway generation.

The bars had compostable plastic cups which was brilliant. Why can’t all festivals invest in these?

Beautiful Days is a great middle sized event for families who want to enjoy festivals as they used to be. Back in the good old days!

Find out more in in Beautiful Days factsheet