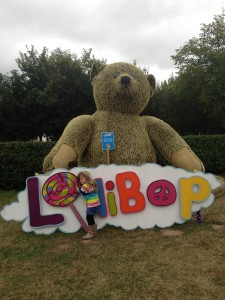 Hatfield House, Hertfordshire
I’ve always been intrigued about Lollibop and its ambition to be the “big bash for little people”. But having been held in London for the last few years I’ve been put off from travelling down and negotiating the Underground with small people, so was pretty happy to see that the new venue was in the grounds of Hatfield House. As my husband had a prior commitment my dad came with me and Evan stayed with my mum for the day.

This was easy, two hours door to door, although the M25 was avoidable from Norfolk. Excellent sign posting from Hatfield, little queuing on the way in. The entrance was less than a minutes walk from the car.

We found the security to be a bit too heavy handed on the gate – I had left my purse in the car and needed to go back to get it, and I was aggressively questioned as to why I wanted to leave the event. Later on my dad needed to get to the car and was questioned about why he wanted to go out, and that a ‘lone man’ would not be allowed re-entry. This seemed ridiculous, as at a family festival it is often the father that needs to go out to get something, and unfortunately tainted the mood of the day.

From the outside I thought it looked like a glorified village fete which in essence it was, only with well known brands promoting their wares. It was a good layout, all the stalls and vendors were well spread out, perhaps too spread out as it looked a little sparse. Giving them the benefit of the doubt I would imagine that being in a new venue would throw up all sorts of issues as to where to place stalls and tents and if they choose to hold the event at Hatfield House again, they would put more thought as to how to get the most of of the site. Some events can be so crowded but I didnt feel overwhelmed by crowds here because of the space. 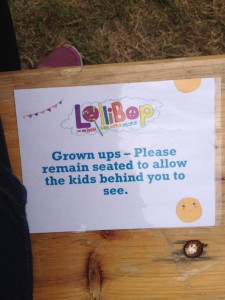 There were two stages on which acts from Cbeebies and other TV shows were performing. One was an outdoor stage and the other was an enclosed tent which I am not a fan of as once they are full there they are stuffy and difficult to get in or out. This put me off completely and every time we walked past there were either massive queues or the act was fully booked. However we caught Lazy Town and Poppy Cat on the main stage and saw a bit of the brilliant Justin Fletcher’s performance before we left.

There were a few other large tents containing dressing up, the Science Museum and Baby Ballet. I thought it was good that the organisers gave parents and carers gentle reminders to sit down during perfomances so that the children could see although this wasn’t always the case from what I observed.

The Lollibop Wizzard tent was pretty good with wand making and a few other activities although these were a little prescriptive with the helpers helping a little too much (something my very independent daughter is not used to) the magic show was entertaining with Hagrid and Harry Potter, who looked very much like the film characters.

There were lots stalls and companies there; we were delighted to see BEAR with their tasty snacks which my children adore and saw the Pom Bear picnic area and big bell tent, we are big fans of both snacks in this house so a bonus that we had some tasty free treats to take home with us.  However I did feel that there were too many brands and product promotion and not enough of these were offering interesting activities.

We struggled a bit to find activities and there were either massive queues to get into something such as the River Island tshirt design shop or there wasn’t really much going on once you got there, so we were looking forward to the pirate school and when seeing a pirate ship on the map Eila got all excited, she was disappointed to see that there wasn’t actually a pirate ship at all, just a group of people dressed as pirates and we weren’t sure how you could participate.

The highlight of her day I think was the entertainer in the VIP and press area who kept a large group of children entertained for over an hour! He was excellent and she didn’t stop talking about it after. 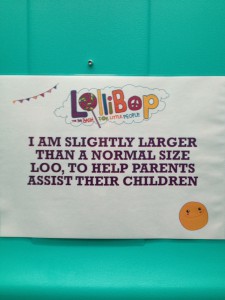 We could not fault these, they were immaculate with toilet paper and hand wash, they were larger style portable toilets so that parents and carers could assist their child if need be. And there were plenty of them!

Baby change tents and feeding tents were available as well as excellent looking disabled facilities such as an elevated viewing platform near the main stage, accessible toilets, adult changing facilities and pretty easily to navigate terrain.

There were tables located around the site with small Little Tikes tables for children to sit at and IKEA high chairs to use for eating picnics or food bought on site.

There was a range of food on offer for most dietary requirements. Usual festival prices of £6 and up for adults. Children’s portions and menus were advertised on most food stalls which was pretty good and these started from around £3.  The queues looked pretty crazy around lunch time so we were thankful we had bought our own picnic, and it was great there were so many places to sit and eat.

For the grown ups there was the “Adult Crèche”, basically – the bar. These appeared to be sponsored by Laurent Perrier Champagne and advertised different size bottles of champagne (which weren’t all for sale but yes you could in fact buy a bottle of champagne if you so wished) you could buy a can of low rate lager for £4.50, no draft at all so no choice of pints or halves. Although the event was for children it would have been good to have had something decent to drink other than champagne – some real ale and cider please for next year?

Would I go back?

I’m not sure, it’s not the sort of event I am used to as it is exclusively for children, and I am used to events that have something for all ages so this was a different experience for me! not. The venue was brilliant and I am glad I have had the opportunity to go but it was very disappointing with no atmosphere, nothing to bring it together, no organisation, half hearted security and poor communication between them and the Lollibop crew.

The actual activities on offer, that I observed, weren’t actually thought out activities, most of them were very perscriptive which my daughter didn’t really like. In my humble opinion for families who want to take their children to a family friendly event, there are many more out there for a lot less money and with a lot more going on.

The only way I can decsribe it is, Lollibop like “V Festival for Kids” well known brands and and names and it does what it says on the tin and you will either love it or hate it.

I would like to think though that the organisers value feedback and will make changes as and where appropriate. I do think that they should stick with Hatfield House, it’s a beautiful venue and good location for many families.