How can I describe our time at Camp Bestival 2015? Epic, joyful, sunny, crazy, busy, vibrant, loud, wonderful and exhausting. 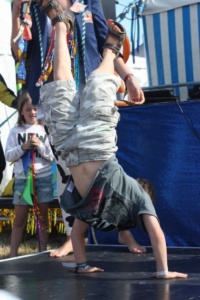 We used to go to Camp Bestival many years ago and wanted to return this year as our youngest is 5 and we thought that he was a perfect age to enjoy it. He had an absolutely wonderful time.

It also made me think that what I want from a festival (something arty, relatively peaceful and with a radio 6 friendly music line-up) is not always the same as what a little boy might enjoy.

He adored the silliness of the Blue Coats and promptly got on stage to show off his breakdancing skills. He went to watch the motorcycles on the Wall of Death three times with his Dad (I could only face it once). His eyes nearly popped out his head when a giant T-rex puppet walked past him in the field. He played in the mud at the Dingly Dell,made puppet shows, had a noughts and crosses competition on a tree stump in the woods and rolled down huge hills. He threw some crazy dance shapes to Underworld and watched the firework show with a mixture of terror and amazement. He had a blast. 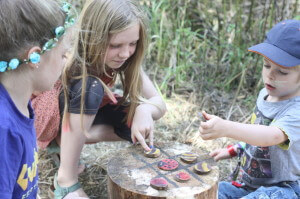 s we arrived, we had no problems driving onto the site and we were directed into the campervan field. Pitches were well organised and generously sized.

The kids had no problem sleeping at night although I definitely needed some earplugs to muffle the sounds of the bass coming from the dance tent and late night revellers returning home.

Running water and toilets were available at the campervan field however they were situated at the very top of the field some distance from where we were pitched. Fortunately we had a camping toilet with us and this was helpful for the children in the middle of the night. 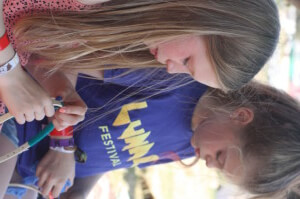 Camp Bestival is a well-oiled machine on an epic scale.

It’s so massive that at any one time there could be 30 activities running at once. So we were never going to see everything that’s on offer and we tried not to tie ourselves to the programme and wandered around to see what caught our eye.

There are plenty of wacky activities to enjoy. Our favourites were being wedding guests at the inflatable chapel, watching the kids showing off their wild skills in a competition to win a golden pineapple at the Blue Coats stage and doing aerobics with Pan’s People, who are still in very good shape!

My son adored going on the Train of Lost Souls, which was basically a very slow tractor ride, but the actors inside each carriage transformed it into something magical. The spectacle continued throughout the weekend, with giant giraffe and dinosaur puppets walking through the crowds and a carnival procession on the Saturday evening. 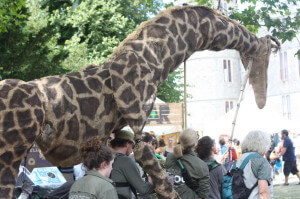 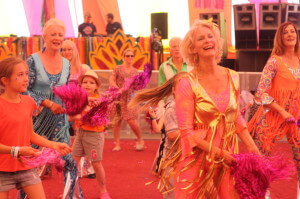 Nothing seems too crazy or impossible here. Want to sing karaoke on stage with a gospel choir behind you? No problem. Want to lie in a hot hub on top of a double decker bus whilst drinking bubbly? Fine. Want to take a llama around a race course, ride a unicycle or bet on a ferret race? Step this way.

Whilst the diversity and creativity is wonderful, sometimes the craziness, the sun, the dust and the noise got a bit too much for me and I found myself craving a bit of peace and quiet.

Searching for something a little less stimulating led us to Caravanserai, a mini festival within the festival, where you can relax in a vintage 70s caravan and read the paper for a while, or sunbathe in a fairground waltzer whilst sipping a cold can of lemonade (or cocktails for the parents). We even bumped into some friends in there, which we wouldn’t have predicted given the size of the festival.

We also spent time in the shady playground at the Dingly Dell and at Lizzie’s way, which is a woodland walk full of beautiful little dens, play kitchens, nature themed puppet shows and was perfect for little ones.

The festival theme was Wild Thing and we enjoyed looking around the National Trust’s 50 things to do before you’re 11 ¾ area. My daughter would have loved to try the tree climbing but it was fully booked. It looked great fun though. 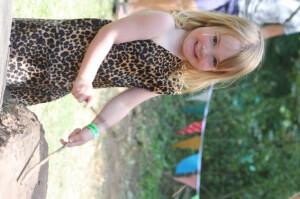 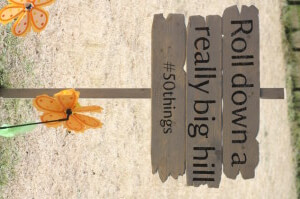 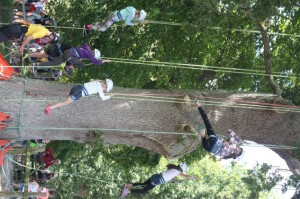 Whilst it was easy to find lots of activities for younger children and there was a dedicated space for teenagers (no parents allowed), my 10 year old daughter seemed to fall between the two camps.

Luckily she had a friend with her and they had lots of fun chatting, doing cartwheels, playing on the crazy bikes, eating churros and mooching about. Even the fairground rides (£2.50 each) seemed to be aimed at a younger audience.

Their favourite activity was making a dreamcatcher, which at £6 was very good value as the activity took 1.5 hours of peaceful chilling out in the woodland crafts area. I think that she would have enjoyed the comedy tent and some of the theatre shows.

There is music everywhere. Every corner you turned around had a rave, reggae party, disco or an MC. We had fun dancing to the funky tunes of a steel drum band playing Uptown Funk and the conga.

All of the family enjoyed dancing to Norman Jay’s Good Times set and waving our glow sticks with Underworld on Sunday night (despite a couple of trips to take the kids to the loo – arrgh!). We danced and oohed and aahed to the fireworks finale, which took my breath away.

I’ve got to be honest and say that the music line-up didn’t particularly excite me this year, although the main stage area was always very busy and we could hear the crowd having a great time singing along to the Kaiser Chiefs on Saturday.

Kate Tempest did an amazing set, with some very inspiring words for young girls in the audience, but then she spoiled it for me by using the F word too many times. The artists know that there will be loads of kids in the audience and whilst I accept it when swearing is in the lyrics, I don’t think it is necessary when talking to the crowd.

I also enjoyed catching some music from new bands such as Slaves, which seemed to have loads of happy Dads and teenagers in the mosh pit!

There was an amazing selection of food and drink to try, from the Farmer’s Market to the Feast Collective, Woodland Banquets, Indian food from Thali, street food from Dorshi and the good old W.I. tea tent.

The kids were pleased to see some more child friendly options including Nandos and fish and chips. Sweet treats were provided by the very popular churros stall, green brownie stall and amazing ice cream from the Purbeck ice cream company- the mango sorbet went down a treat.

Prices were more expensive than other festivals we have been to recently- just under £5 per pint, £8 for cocktails, £5-7 for children’s meals and £7 plus for adult meals.

There were plenty of opportunities to try high quality and diverse food but you have to have deep pockets, or treat yourself to one expensive meal a day and supplement it with food at the campsite.

Camp Bestival is a well established and well organised festival. There must be an incredible amount of work behind the scenes to make such a huge event seem so effortless.

The site is set in the beautiful grounds of Lulworth Castle and I love how they make the castle the star of the show during the fireworks display. The decorations are beautiful and well made.

Although there were some areas which were run by corporate brands, the activities provided were good quality and we were not bombarded with marketing. 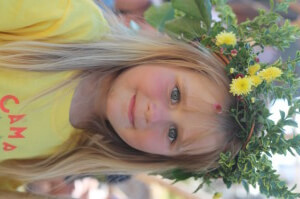 The site is large, which means that a lot of walking is involved or lugging around a pushchair or festival trolley.

Pulling the trolley up the hill at the end of the day is a bit of a killer but just about manageable.

There are large crowds of people but it never felt over-crowded or stressful. Leaving the site was a bit more challenging with a 1.5 hour queue to leave the car park on Monday morning. As there is only one road to enter or leave the festival, I’m not sure that much can be done about this, so in future we would make sure that we left the site early to miss the rush.

In contrast, my husband drove the campervan off the site fairly quickly! I think that the stewards were stopping the cars to allow the campervans to have a clear run up the hill so they didn’t break down.

There was a sense that luxury and convenience is available, if you are able to pay for it. There are a huge array of glamping options available. You can pay £2 to use a clean, illuminated toilet, £45 to sit in a hot tub and have a shower or £125 to reserve a camping pitch a bit closer to the main area.

Given that the ticket prices are relatively high, I personally would prefer to see good quality facilities available for everybody, rather than for those who can afford it. I’m sure that the high end market is a good money spinner for the festival but it does create a bit of an “us and them” atmosphere.

The toilets were generally clean and well maintained, although I think they could do with some more around the castle stage as there were often queues. Running water was freely available at several points around the site.

Phone charging was available for £6 and there were well staffed hospital and welfare tents. The security staff were helpful, courteous and relaxed. No glass was allowed on site but there was no checking of bags before entering the festival arena.

Drinks were provided in paper cups, and I saw several children rummaging in the bins to grab the cups and return for money, as well as lots of recycling points around the site.

The site was generally clean and well maintained.

For younger children, this is a spectacular, creative, high energy event which is bursting with activities, diversity and imagination.

There seemed to be less for older children, which is an area I would challenge Camp Bestival to think about in order to keep families returning.

For myself, seeing my son’s joy will leave me with many everlasting memories. But this is not a relaxing event, it is a 72 hour party and it’s hard work for parents! 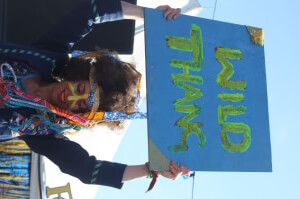 One thought on “Camp Bestival 2015 Review”