As a family, we love castles, we love festivals and we love a bit of living history. Therefore, England’s Medieval Festival was a fantastic choice for us.

Where better to hold a medieval festival than in the grounds of a beautiful medieval castle? It was fit for a fairy tale. Herstmonceux is just North of Eastbourne and the Castle and the next door Observatory are must sees if visiting East Sussex. If you want to see the Castle tell its history, then this is the weekend to choose. The castle itself remained closed to visitors during the festival, but there was entertainment in the cloisters. The castle moat added to the beauty, with its pretty lily pads.

One of the great things about a festival site that is open to the public for the whole year is how accessible it is – the ground is reasonably even, and ease of access has already been taken care of before the festival arrived. There were a few steps, but it was easy to avoid these. The campsite was very bumpy, but we were directed to camp near the entrance, so we didn’t have too many bumps to navigate around.

Dressing up is definitely encouraged, and enjoyed by so many. Medieval is such a fun style to embrace as knights and fair maidens both look great! My costume felt a bit too much like fancy dress, whilst I was surrounded by living history. There were many stores supplying outfits and accessories, and it did not take me long to find the perfect dress, so that I blended in for the rest of the weekend. Among the younger attendees, I spotted many Meridas, Elsas and Rapunzels, alongside several gallant knights. It was such a fun world to become a part of.

Every morning, the festival opened with a parade followed by a chance to see a staggering portrayal of the siege of the castle. This was a wonderful way for festival goers to really get a feel of the era.

There were nine areas around the grounds with timetabled events. The main event was the daily re-enactment of the Battle of Herstmonceux, replaying events from the showdown between the Lancastrians and the Yorkists.

The schedule was the same for each of the three days, which was great as it meant that we could definitely everything that we wanted to.

We watched the wonderful Pentacle Drummers a lot, as they performed a lot, all around the festival. For the Medieval Festival they abandoned their regular black, red and green outfits for traditional medieval dress, and they looked great. I imagine their highlight was when two of them got engaged on stage. How lovely!

One of the three bars had a story telling stage attached to it – a marvellous way of keeping the whole family happy! 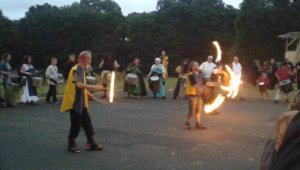 My kids aren’t keen on sitting and listening at festivals. When my son needed some downtime I took him, under protest, to see the Fool’s Puppet Show. He still won’t admit it, but he loved it. It was great to sit at the back, watching him yell out, “The sausage dog put a wish in the wish basket!”

In front of the castle was more drumming and acting. We enjoyed watching the Elemental Fire Show in the day time, but it was so much better to see them dance with fire at dusk with the drummers behind them. It was quite mesmerizing.

Whenever we go somewhere with jousting, we always make it a priority to see it. The Medieval Festival display was put on by the Knights of Camelot. This Holland based group showed us knight skills in the early afternoon. Later they wowed us with an uncoreographed jousting competition. It was fabulous to watch. My two wanted to see every show.

We saw theatre like nothing I had ever seen before. Theatre In The Mud was fantastically squelchy and muddy. They retold tales of old including a rendition of William Tell, with Tell aiming a handful of mud at the apple on his son’s head. It was lots of fun, and attendees were advised to arrive early, but perhaps not sit too close!

We also really enjoyed a demonstration of sword fighting by the Klopffecter Sword school.

Every lunchtime, in front of the castle, there was a demonstration of archery, medieval shotguns, and Europe’s largest working portable trebuchet. It was explained in detail how the contraption worked, and then it fired balls wheeeeeeeeeee into the moat. Splosh! Four times!

If your children are doers rather than watchers, make sure you load your wallet for this festival! There were so many fun and unusual activities to partake in, but none were included in the ticket price.

I’m used to going to festivals and saying, “Choose one thing out of the ferris wheel, the banana swings and the helter skelter and that’s it!” I resent having to pay out for the same old rides that are everywhere we go. However, I found it impossible to begrudge them a turn on any of the have-a-go activities at the Medieval Festival, as they were all so brilliant.

Both my children tried their hand at archery, cross bow, axe throwing, bowling, catapult, ballista and jousting. All of the stall owners were very skilled and knowledgeable and ever so friendly. The kids had an amazing time trying everything out, and it was wonderful to watch.

They also tried Archery Tag for the first time. This sport is basically like paint balling, but shooting with a bow and arrow instead of firing painful paintballs. They loved it, and I thought it would be a fantastic idea for a birthday party next year. 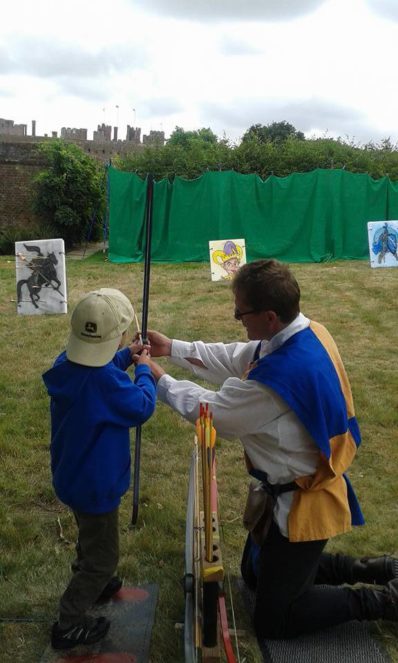 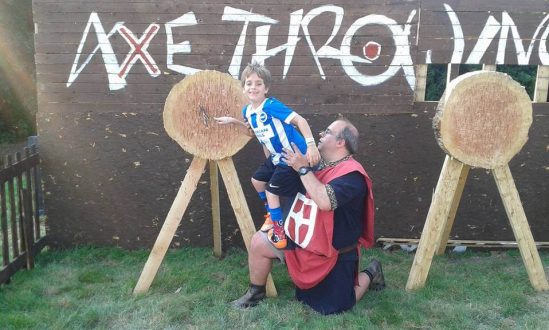 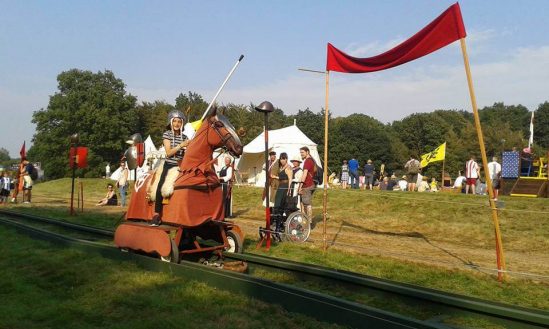 I think most of the people who chose to camp were performing or participating in some way. It was spacious enough and quiet at night. It could have done with more toilets, certainly some accessible toilets and a temporary shower block or two. There were six showers to use but they were a five minute walk away. Also, as they were such lovely showers, people were spending ages in them, so the queue was painfully slow.

As temporary residents of the castle grounds, we were made to feel quite special. Entertainment for day visors finished at 6pm each day. However, for campers, two of the bars remained open, and at least one food outlet. At about 7.45 a torchlit procession made its way through the campsite finishing with drumming and a fire show in front of the castle. Stix led the procession on Saturday, and then the Pentacle Drummers led the way on Sunday. 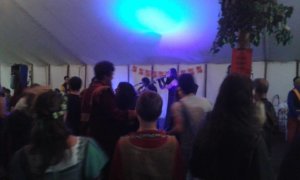 The main bar (The Buxom Wench) offered live music and dancing until late. I don’t know how late as I was already asleep when it finished and evening entertainment was not listed in the programme. The other bar (The Knight’s Tavern) showed two films per evening in the garden. We were there on Saturday and Sunday night. Saturday’s films were aptly Brave followed by A Knight’s Tale. Sunday night was equally appropriate with How to Train Your Dragon and then Rapunzel.

Also, being next to the observatory, meant that we could see the lasers going up to the satellites. It was quite a sight to behold.

The food was fine – we all ate well. At one end of the festival, at the top of the jousting field, were burger vans and curry vendors. There was a delicious fresh lemonade stall, and my daughter loved the spiral potato on a stick things!

At the other end of the site, there was a lovely cake stand, and what seemed like a lot of places to buy sausages. That could be an exaggeration. As a vegetarian it always seems to me that there is a lot of meat on sale! My favourite food outlet was The Flying Machine Café. It offered an extensive menu ranging from breakfasts to Mexican dishes to chocolate waffles. The staff were more than happy to adapt to whatever each customer fancied. They also served the best hot chocolate. It was ideally located by the outdoor cinema. I got breakfast and dinner from them every day.

England’s Medieval Festival is a beautiful event in a perfect setting, and would suit anybody who is a fan of history, theatre, dressing up, castles or just fun. Along with everyone else it seemed, we had a fantastic time. Both my children and I hope to return next year, and bring friends,and will look out for more medieval events in the meantime (not just so I can wear my dress again!) 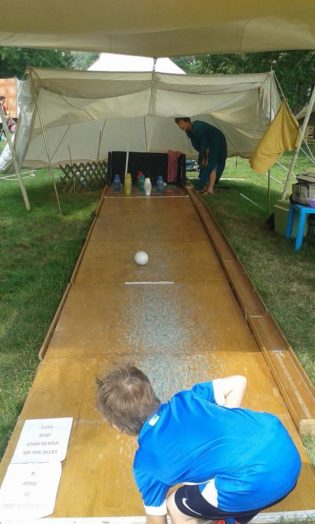 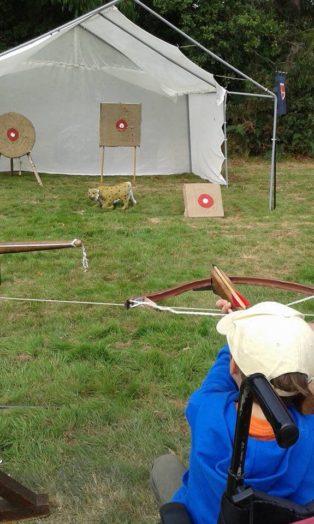 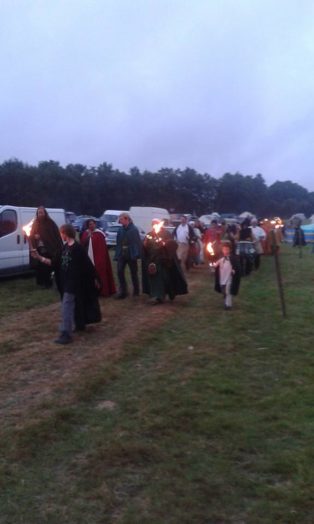 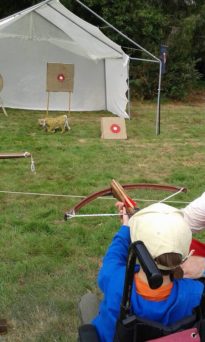 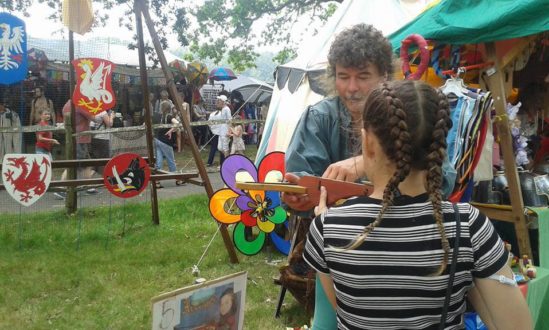 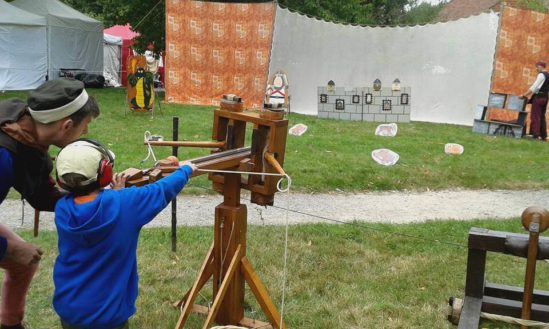 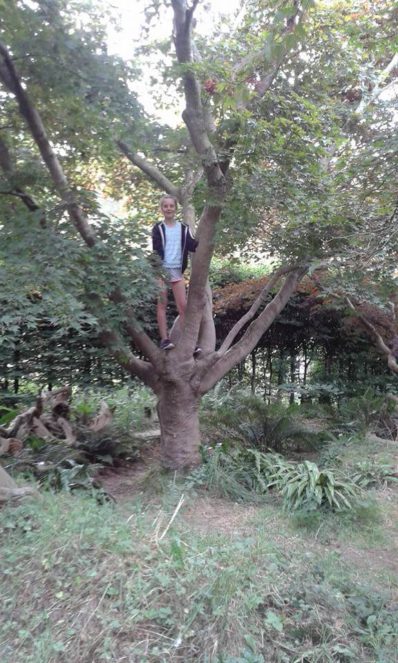 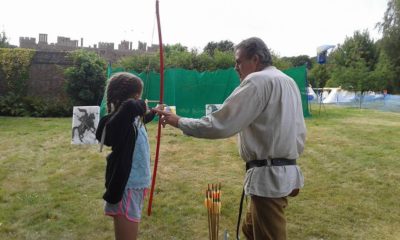 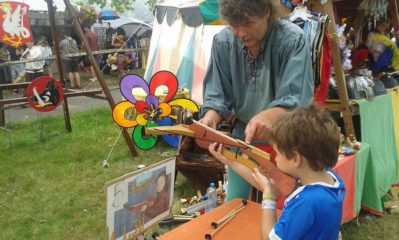 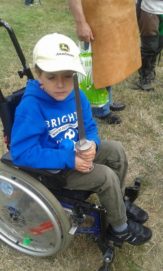 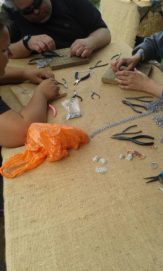 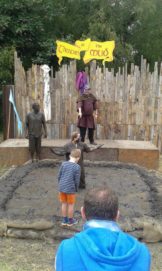 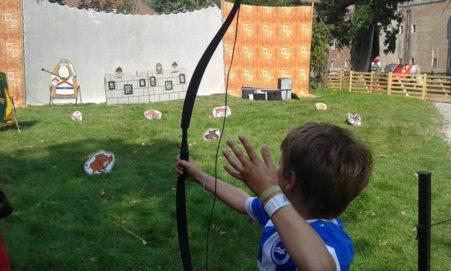 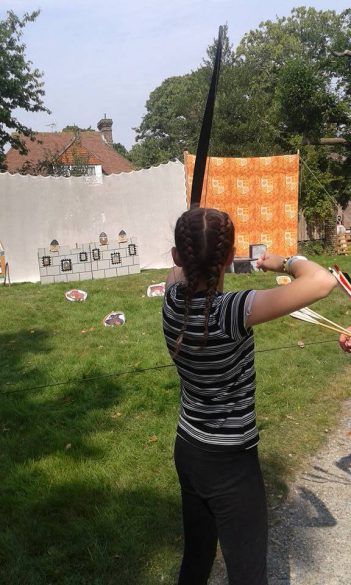 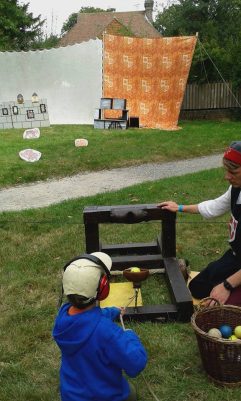 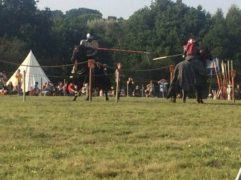 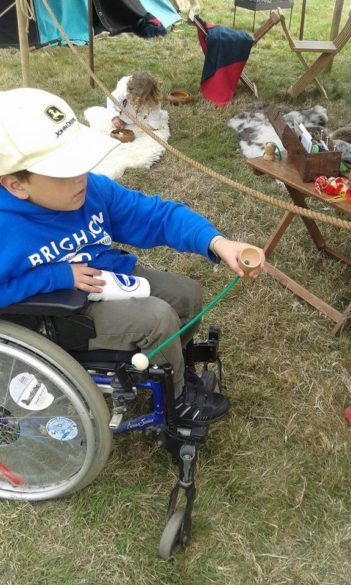 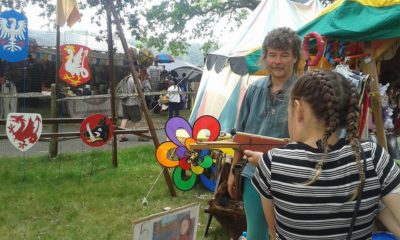 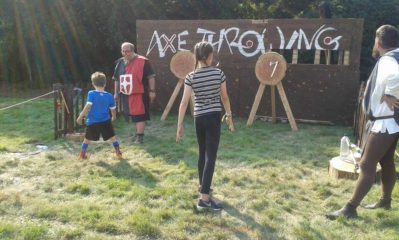