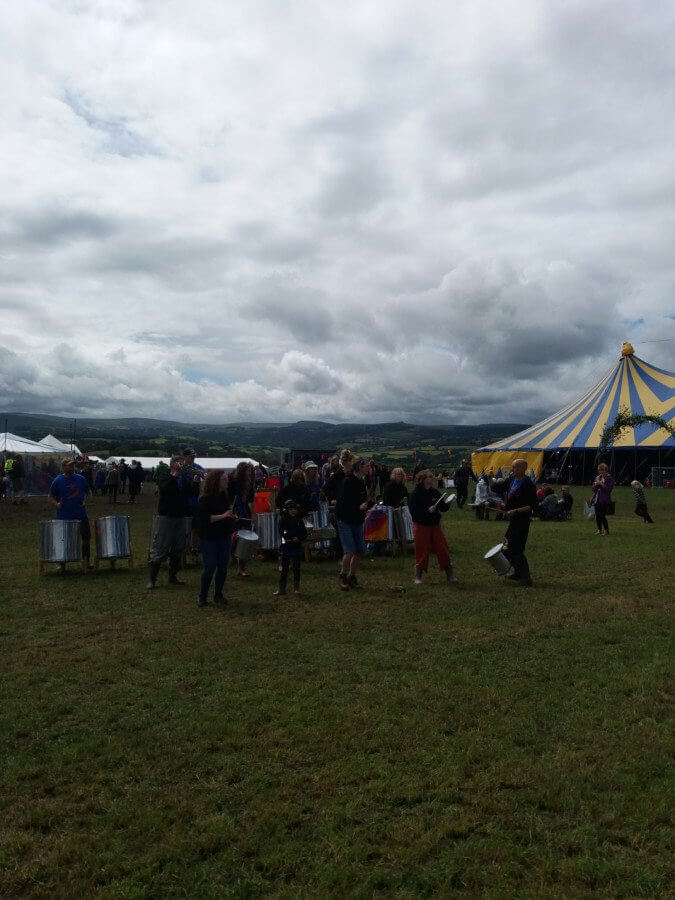 It was wet and cold but at Chagstock I saw only happy faces. People had come to enjoy themselves and that’s what they did.

This was my family’s second time at Chagstock. We came in 2015 (to see The Levellers and New Model Army). We returned this year as we had so much fun the first time. Travelling from Sussex, we were a little hesitant when we saw the weather reports from Devon – lots and lots of rain! On their Facebook page, the Chagstock organisers had assured ticketholders that despite the weather, the festival would be going ahead. Ever the cynic, I doubtfully loaded the children into the packed car and drove towards the rain. We knew we had a safe haven if it did turn out to be a wash out as my parents live less than an hour away from the site.

We did ended up bottling out of doing the whole wet festival experience. After dropping the children off at Grandma and Grandpa’s en route, (at their insistance,) I continued solo. I was very keen to see Slamboree, despite knowing nothing about them aside from their description online as the World’s first pyro circus rave massive act – very intriguing.

The rain had stopped a while before I arrived. I had missed witnessing a glorious double rainbow over the arena. There are however some beautiful photos captured and posted on Chagstock’s Facebook page. This is a lovely example. I was also a bit sad to miss Black Water County as they always put on a fantastic show and that would have been my only time seeing them this year.

Chagstock really is a happy place. Every single steward that I spoke to smiled and was genuinly excited to be there. They were all happy to chat and very helpful.

Rain did not stop play!

The car parks and the camping areas had all suffered from the rain. The organisers dealt with the adverse conditions extremely effectively. Chagstock clearly maintains a fantastic relationship with the locals of the surrounding area. It did not take long to arrange for tractors to be brought in to assist with the parking of cars and camper vans.

The weather did necessitate some schedule changes such as Friday night headliners having to appear in the marquee rather than the main stage. There wasn’t a single grumble about this though as changes were announced from the main stage. The announcements could be heard from across the whole site, so there was no confusion.

The camping areas are not too far from the car parks or the arena, and with plenty of toilets and running drinking water. The happy helpers were back with their wheelbarrows, to transport equipment from car parks to camp sites. They just asked for a couple of quid donation to charity. There was a separate quiet area for families. Chagstock are also happy enough to allow tents into the campervan field, so that friends can camp together. Accessible camping was flat with accessible toilets and was right by one of the entrances.

Si Ford, the Chagstock Organiser chose the theme as a tribute to his mother, Sheila Ford (nee Monypenny) who worked as a code breaker during World War II. She sadly passed away late last year, after being a great supporter of the festival. She even hosted the first Chagstock in her back garden!

My favourite group effort was the Austin Powers collective. 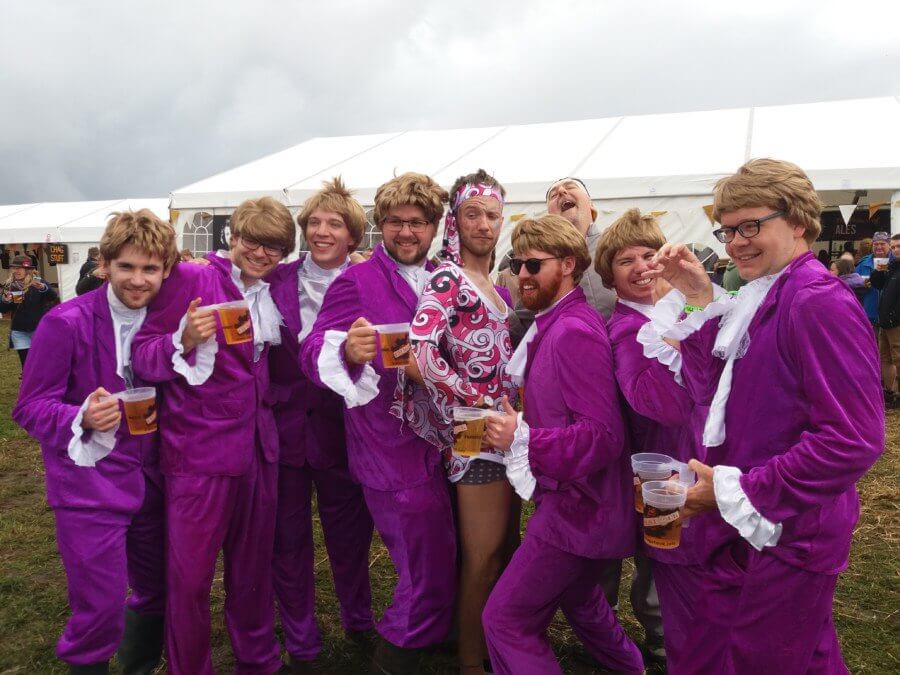 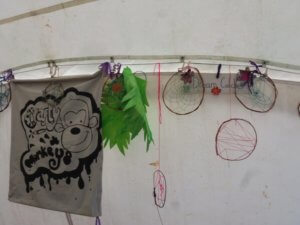 I took my two (13 and 9) to spend the day at the festival on Saturday. They were both pleased to see that the plate smashing was back. The craft tent was free, and offered opportunities to make and decorate paper top hats, dream catchers, fairy wings and more. Adjacent to the craft tent was face painting. Those wanting their face painted needed only to offer a donation. Glitter tattoos were available at a reasonable £1.50. Hair wrapping cost 90p per inch.

Apart from the craft tent, there were fairground rides. Whilst these weren’t free, they were cheaper than at other festivals. I was paying £1 or £2 per activity for each child rather than the usual £3 or £4. Mine both enjoyed the banana boats, shooting galleries and my son was just about small enough to still enjoy the bouncy castle and slide. (I’m sure he will be next year, too!) He loved the football free kick game as well until he didn’t win. Both the football and the shooting game owners were kind enough to offer consolation prizes though. That cheered him up! 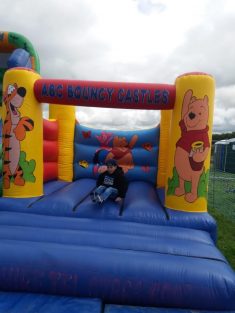 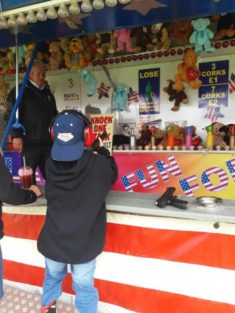 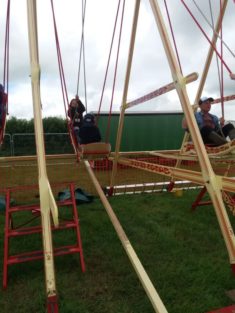 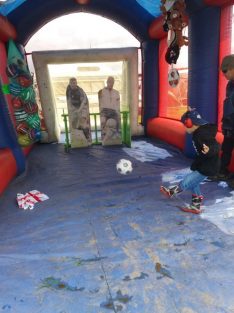 Outside of the main children’s area were other fun activities. My daughter and my son both mixed lovely smoothies by pedal power. That is always a favourite, and we see the smoothie bikes at a few festivals over the summer. My daughter made a beautiful crystal keyring for £3 in the healing area, Peaceville. She didn’t get a henna tattoo here although they were on offer.

They probably spent the longest amount of time at Totally Potty. This fabulous Plymouth based stall is a place where children and adults are able to paint beautiful pottery items. My son, who normally just likes the physical play stuff at festivals, actually sat for a good twenty minutes painting his train. They only had large trains and I was concerned about the cost, but Emmeline was kind enough to do me a deal as my daughter fancied doing some painting as well. I even got to wander off and have a bit of an explore while they were so engrossed. If we lived nearer, we would defiinitely visit Totally Potty in Plymouth. I hope to see them at other festivals.

Another idea that I absolutely loved at Chagstock was a large colouring in mural, thoughtfully set up at the end of the bar in the beer tent. There was a table of paints. Adults were getting involved too. I thought it was an ingenius way of keeping children focused on a fabulous activity. Everyone was happy in here – dry, and able to take a break for a while.

Personally, I think Chagstock could do with a bit more free stuff for children that aren’t so artsy crafty. I’d love to see a climbing frame or hay bale maze. Circus skills workshops are also popular at most festivals. 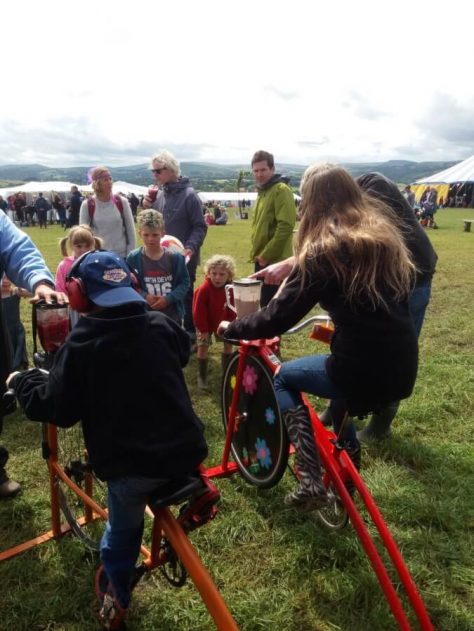 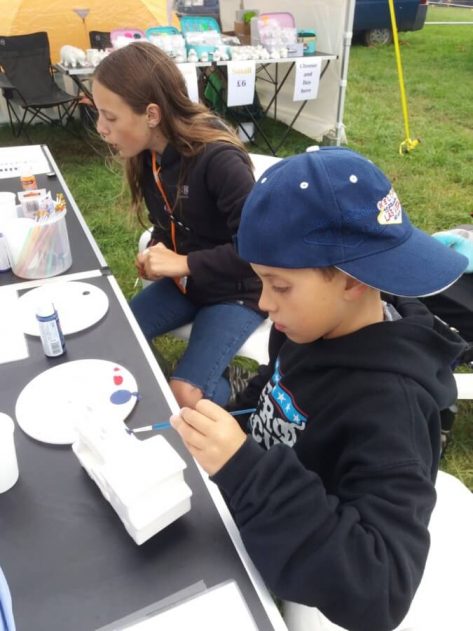 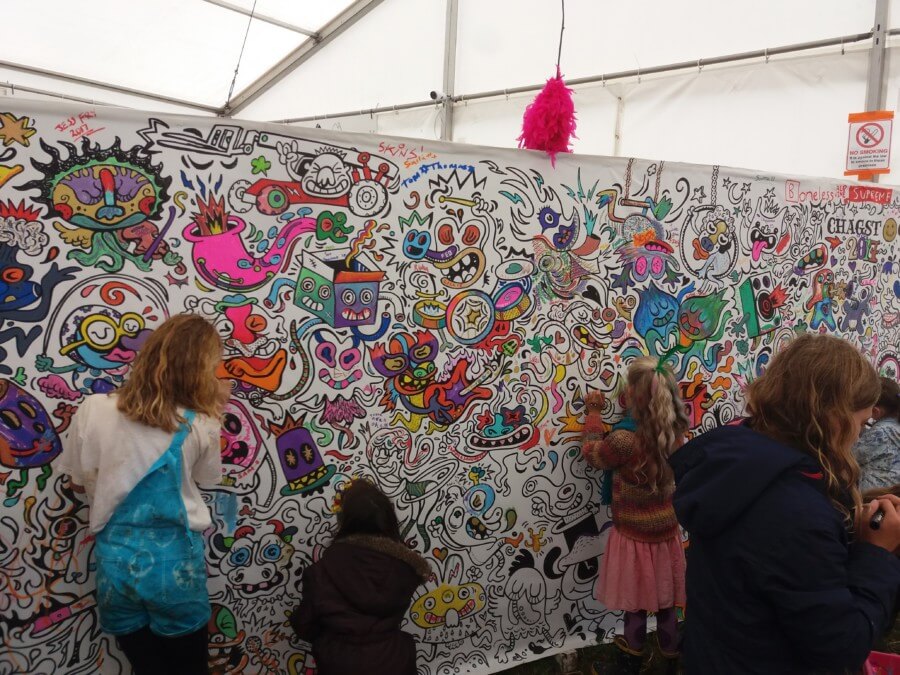 I was so glad I went down just to see Slamboree as they were outstanding! The theatrics were similar to Circus of Horrors, only with a lot more focus on beauty and dance. The combination of burlesque, circus, techno, rap, and so much more was a feast for all the senses. I can’t wait to see them when they tour in the run up to Hallowe’en this year. My favourite song of their show was Feels it Going. The lead vocalist got the whole crowd involved, joining in with the singing. This is no mean feat for a relatively new act. They taught us a dance in another song. They ended by getting us all to squat down in the mud and then jump up bouncing, fists held high, for the crescendo of the very passionate Revolution. They were just brilliant. They’d be perfect for any festival. 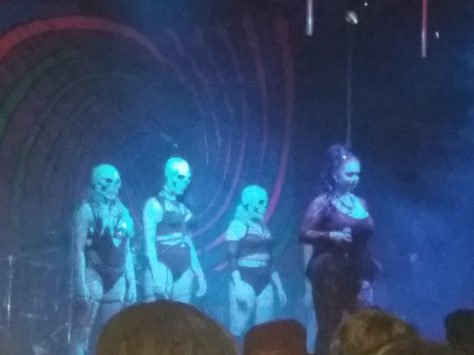 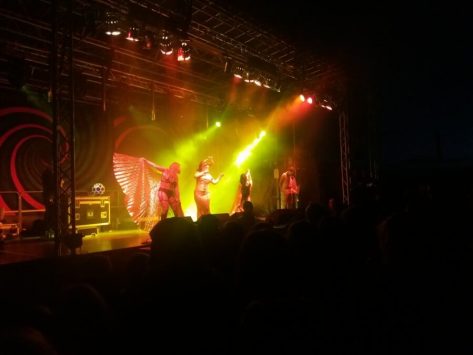 Despite the fact that Slamboree put on a show easily good enough to be the finale for any event, it was a pleasing contrast to be transported back in time a couple of decades to witness the hugely popular Soul II Soul. It was evident from the packed out tent that they had been hotly anticipated. They opened with Keep On Moving and kept the crowd happy with vocals from both Caron and Charlotte.

Other musical highlights over the weekend were Dub Pistols, Skinny Lister, Dr Feelgood, The Shires, and the more relaxed vibe with the local bands in the Live Lounge. Another treat were the drummers at the top of the field before the music started on the stages. It was a great start to the day for me, watching and listening to them with the backdrop of the festival and then the rolling Devonshire hills further behind. 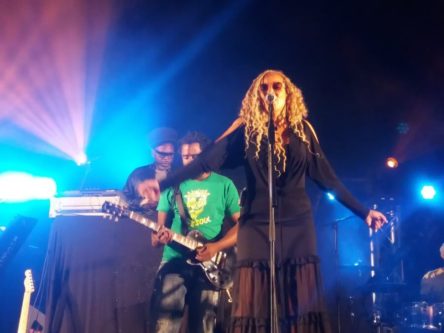 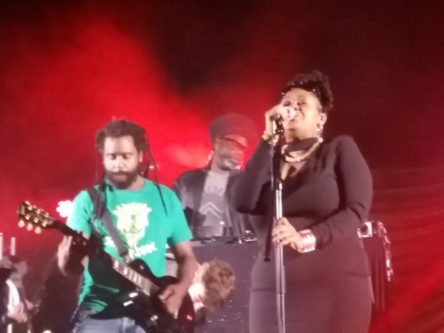 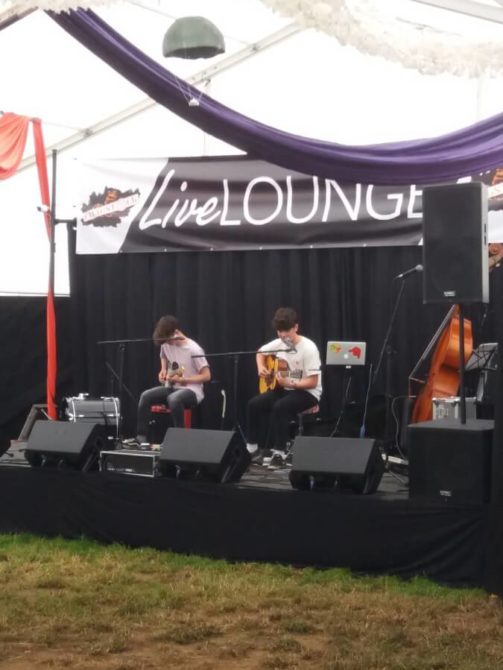 There was easily enough choice for food and no queues at all really. The veggie burger stall was uncomfortably next to hog roast, but I ate there anyway and couldn’t taste or smell meat. I might not have been so fortunate if the weather conditions had been better. A burger and chips cost me £8, as would a pizza. Chips were £3 or £3.50. The prices were even more reasonable at the bar, with nearly all lagers, ales and ciders etc costing £3.50 for a pint. Only Tarka was £4. A spirit and mixer was also £3.50. I thought this was a bargain compared to many other festivals.

In the arena there were proper flushing toilets, that I also never saw queues for.

The accessibile campsite was great as it was flat and close to the arena. Getting around was trickier with the mud, but that’s a given on farmland, and true of most festivals. The satff were amazing, always offering help. It didn’t even get that bad to be honest. We managed to navigate ourselves around the whole arena without getting stuck. Nor did the wheelchair go home in anywhere near as bad a state as I would have predicted.

Viewing platforms would make a nice addition. We could still see from the back though due to the slope down to the stage.

One aspect that I thought was excellent was the pricing. Day tickets were an option, which included camping for that evening, and also entry into the arena until 12pm the following day. That’s a great way of doing it as it means people can have breakfast on site before packing up and driving home.

It was a lot of fun despite the weather, and I came away with a positive feeling about how Chagstock is evolving. There is a great team behind Chagstock, and it shows in all aspects of the festival. The line up is impressive for a small festival, and its charm is reflected in the smiles on the faces of everyone there.