The Flummoxed Festival was tiny. Teeny weeny tiny. Previously I had thought a festival with under 5000 people was small, but this one had 150 people, including the kids.

So I’m not sure whether the Flummoxed Festival is a festival or not, or just a lovely family friendly camping event with lots of live music and activities added for good measure.

But this was actually what made it a very enjoyable, friendly, relaxing experience and one that my whole family would readily do again next year.

This is a fledgling festival which appears to offer something quite different for families, a bit of a middle ground between staying on a normal camp site and going to a large, noisy festival.

Flummoxed was set up by Peter, a drummer in a band who was looking to play at a festival. He decided to solve the problem by creating his own festival to which he invited all of his family, friends and their children. And that’s what it feels like, a big sociable gathering of friends on a lovely field in the countryside.

Everyone was so friendly and chatty and the kids made friends straight away. They were running in and out of each other’s tents, making loom bands, swapping glow sticks, playing frisbee with someone else’s dad, buying each other sweets from the vintage caravan café, even popping over to another family’s tent to grab some breakfast!

It felt extremely safe and I was able to let my four year old explore on his own (he was always within my line of sight as the camp site is so small). Normally I can’t take my eyes off him for a second when we are at festivals so this helped me to have a relaxing time too.

There were a couple of organised activities including a ukulele workshop, which was run by Adrian, the guitarist in the band. The kids loved this and were confidently playing Incy Wincy Spider by the end of the session. The grownups also had a chance to play and my husband was happily jamming away. 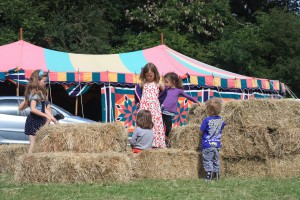 The website had said that there would be a storytelling bus, this didn’t happen but a local author came along and read along some grisly tales. The kids loved it.

We were pleased to see that the children made their own activities, which involved building forts out of bales of hay, going for walks in the local woodland or around the lake, toasting marshmallows around the camp fire, having their faces painted, playing football and dancing to the music. The kids played in a big gang and I didn’t see one child get upset or overtired.

There was one catering stall which sold bacon sandwiches each morning. In the evening they had a barbecue, vegetarian food and salads. The food was very good value (£3 for a vegetarian curry, £4 for a burger) and there were options for the children.

There was also a vintage caravan, owned by Adrian’s parents who sold hot drinks, enormous slices of home made cake, sweets and drinks for the kids. They also provided marshmallows and sticks for the campfire, which my daughter enjoyed handing around to her new friends.

There wasn’t a licensed bar but there was an honesty box where you could buy 3 cans of lager for a fiver, which I thought was a bargain. Most families seemed to bring along a lot of their own food and drink as well as buying from the stalls. 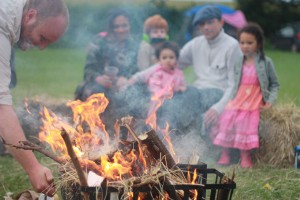 The site was fairly small and included one colourful Indian Marquee, some bales of hay and a campfire and that was it. There was plenty of space for games and the children played in and out of each other’s tents. I saw several toddlers and a tiny baby and all seemed very contented.

One of the great things about this site is that you can park your car right next to your tent. So no need to carry your bags and tents across a field.

The facilities were basic but perfectly adequate for a weekend. There was a running water tap at the end of the field and it was possible to pop out to a local village if you forgot anything. There were four toilets which was fine for the number of people.

There were plenty of boxes around the site to recycle cans and paper. Families were encouraged to take their own rubbish home at the end of the festival.

The site was flat and would be fine for wheelchairs or pushchairs. Everything was accessible within a 30 second wander back to the tent, so no need to carry all of your belongings around with you. 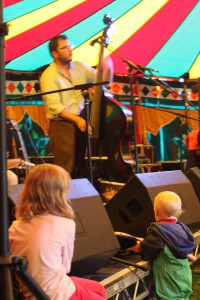 There were two bands who played on the Friday night, who got the crowd dancing away. Scarlett Rae and the Cherry Reds played a rockabilly set and my son made the crowd laugh by enthusiastically break dancing at the front.

On the Saturday, most of the music was provided by people who were staying on the camp site. So one minute you would see a man chopping wood for the bonfire and the next moment, he was standing on stage in his smart jacket singing his heart out.

Double basses and banjos would appear out of nowhere. Peter the festival organiser appeared in his rockabilly shirt and played his heart out on the drums with We Happy Few. The kids loved it and the adults had a good old dance.

After the bands ended there was a disco and I heard loads of classic tunes that I haven’t heard in years. It would have been helpful if there had been a blackboard which told us which bands was playing as I didn’t have a clue. But it didn’t really matter.

If you are looking for the latest headline acts, big production values and endless activities, this isn’t for you.

But if it is your first time at a festival, if you are a single parent, if you have younger children or if you just want a more relaxed experience, this is the festival for you.

One thought on “Flummoxed 2014 Review”