We’ve been home for a few days since the Lunar Festival and I’m still full of that happy, relaxed glow that comes when you’ve had a great time.

I’m in two minds about writing this review. Part of me want to tell everyone about how great Lunar is, and part of me wants to tell nobody so it stays a special secret between those “in the know” and doesn’t grow any bigger.

Lunar Festival takes place in the lush green countryside of Warwickshire, yet it is only a 20 minute drive from Birmingham. As a Brummy family, we are very used to driving for 5/6 hours to get to a festival, pitching the tent, feeling tired, hungry and a bit crabby. Not so with Lunar.

The festival takes place in the half-term holidays, so my daughter went down with her friend and her family and we pootled down an hour afterwards. The kids played together while the tent went up and by lunchtime we were all set up. Job done. It was also very easy to get home so the children were not too tired for school on the Monday.

Lunar is easily accessible from the M42 motorway which runs around the edge of Birmingham (10 minute drive) so easy to reach from most parts of the country.

Lunar takes places on the Umberslade Estate. This houses a children’s farm (free entry with your festival ticket) which is an ideal place to take smaller children for a tractor ride or some peace and quiet.

The festival takes place in two fields, one housing the main stage, the Bimble Inn (a huge tent, complete with double beds for relaxing in) and the Crow Bar. Walk through the bar and at the back is a beautiful enclosed area with caravans for relaxing in, an area for dancing and a psychedelic table tennis table.

In the centre of the festival site is a welcoming campfire which keeps burning throughout the festival. At the head of the campfire stands an enormous wooden crow, made out of pallets and willow.

On Sunday night there was a procession before the crow was set alight by Matt Berry- all very pagan but everyone seemed to love it!

Family camping is a short walk from the festival arena. Showers were available, with hardly any queues. You had to get up early to get the hot water though.

Recycling facilities were readily around the campsite and the toilets were well maintained. I did make sure I had tissues, wipes and hand gel on me at all times as they tended to run out.

This is the third year we have come to Lunar and my 6 year old son was at a perfect age to get stuck in to lots of activities.

He is football mad, so spent lots of time playing games with older kids. Learning soccer skills and taking part in the lunar Olympics. He also had a great time on the skateboard ramp, which provided protective pads and lots of helpful people to hold his hand while he attempted his first half-pipe.

My older daughter is 11. She loves Lunar because she is allowed to have more freedom than she would at a larger festival. She enjoyed going off to the sweet shop with her friend, making hedgerow headdresses, samba drumming, making bath bombs and slacklining. 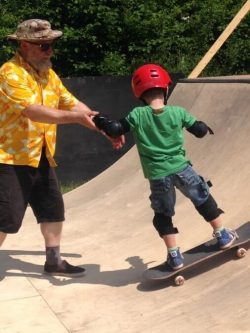 Loving the half pipe with A Third Foot skateboards 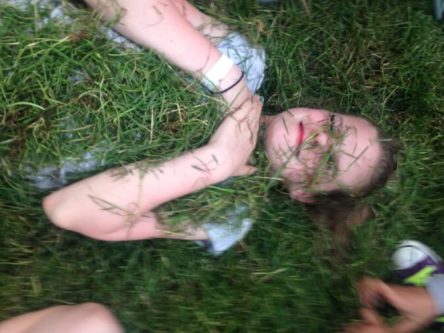 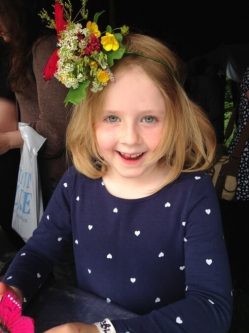 Hedgerow headdress- what a cutie!

All of these activities were free. I do wonder if there could be a few more activities for slightly older tweens/teenagers, such as DJ skills, trapeze or festival make up/hair workshops.

There were some excellent craft workshops including felting and spoon carving for a small fee. I also liked that there were free nature walks and activities, as well as story-telling each day.

The kids were slightly disappointed that the promised helter-skelter wasn’t there. Actually, the lack of lots of organised children’s shows and rides meant that the children relaxed, messed around and had fun.

Many hours were spent doing cartwheels, covering each other in grass, plaiting each other’s hair and generally chilling out. The weekend was unexpectedly hot. Thankfully there were several covered areas where you could get out of the sun, which worked well.

A special mention goes to the How Brave is the Wren travelling bookshop, where you could sit and read some beautifully curated children’s books.

To be honest, it’s often difficult to get the kids to sit and watch a whole band. But as the site is so small, you can still hear the music perfectly from the campsite or watch from the back of the field while the kids are playing.

We really enjoyed Stealing Sheep, Badly Drawn Boy and the Super Furry Animals were an incredible end to the weekend. It seems amazing that such a tiny festival can get such acclaimed acts to play. Which is a testament to the fact that Lunar is also a festival for serious music lovers.

Bentley Rhythm Ace on Saturday was pure joy and silliness. With their gold outfits, a flashing mini and Brazilian samba dancers on stage which had all the children and parents dancing like loons. Once the children have gone to bed, the parents who were lucky enough to have a babysitter can go and listen to Nick Drake in the woods or dance at the well-respected Birmingham club nights Sensateria and magic door.

We went to bed early with the kids. So I made sure I did plenty of dancing during the day at the Northern Soul Dance Workshop. We also learned samba drumming with Bloco Louco.

On Sunday afternoon the whole family were entertained by the Mariachis, who played an entertaining set of covers from Dirty Dancing, Proclaimers and Tom Jones.

Food and drink is good quality and reasonably priced. Children had a variety of food options, including pizza, hot dog meals, toasties, fish fingers/ chicken goujons and chips. All available for around £5.

Free fruit was given away in the children’s field and water taps were freely available. A great ice cream van, selling locally made ice cream, sold out because it was so popular!

The usual falafel, vegetarian curry, and burger stalls were available too. I can’t help thinking that we have such an amazing street food scene in Birmingham it would be great to get more of our local food businesses involved.

It was great to see the Kitchen Garden Café selling a great selection of food, coffee and home-made cakes. I did sneak in there for half an hour on Sunday afternoon by myself for tea, cake and a read of the paper.

Beer was provided by local brewery Purity for £4 a pint. Along with cocktails, gin and prosecco served from a caravan.

A cracking weekend, thoroughly enjoyed by all the family. This is a very special little festival which is going from strength to strength. Highly recommended.

Counting the sleeps until next year…

Find out more about Lunar in our factsheet.