In the words of my 5 year old: “I wish it could be WOMAD everyday”

Confession time, we were WOMAD virgins but this only added to the excitement of setting off on our five and a half hour journey to Charlton Park and our very first WOMAD experience.

Just as we were packed up and ready to leave home at 6.20 am the rain came. Nothing to worry about as we had managed to get everything in our trusted Dolly (our camper van) and at least we were dry.

Ten minutes into our journey and we were starting to worry a little as the heavens opened and just being able to see the road ahead of us was a struggle. Thoughts of “NO please don’t let this be how our first WOMAD is going to be” entered our heads but there was no use in worrying, what will be will be!

We arrived dead on midday and were directed to where we were going to be camped for the weekend. The sun was shining and boy was it hot. Setting up our awning was done in record time and it was time to kick back and relax with a well earned drink in our hands.

Refreshed and we were ready to explore. Immediately I could see that WOMAD were not only offering us A World of Music and Dance but in one corner alone a world of tastes and smells were on offer to stimulate our senses too and the array of contrasting cuisines were dotted all over the festival site. 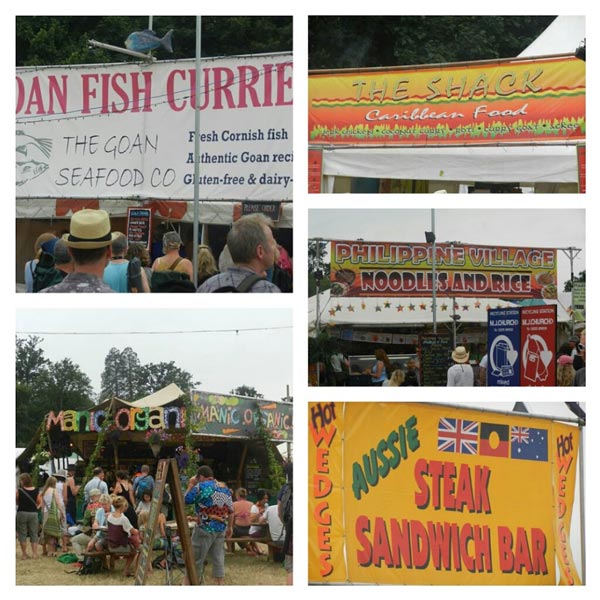 Having explored all corners we were impressed by how well the festival site was set out and that everything seemed to be within easy walking distance. One corner that grabbed our children’s attention straight away was taken up by Carters Steam Fair and a great opportunity to view the festival from the top of The Big Wheel. 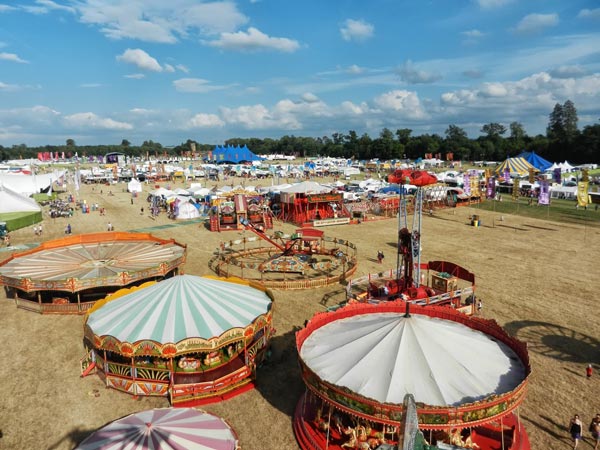 Time for some music now and as is tradition for Thursday’s at WOMAD we were treated to a performance from Malmesbury School Project 2013 with Farah (UK/Egypt/Lebanon/Germany) Some more exploring and we finished the evening listening to the sounds of Rachid Taha (Algeria) and for us it was time for bed, it had been a very long day.

Friday and Emily and Boo were keen to see what was on offer at the kid’s area. This years theme was Flying and Floating and I can honestly say I have never seen so many arts and craft workshops on offer in any one place! From making tutu skirts, flying creatures and machines, butterflies, bats and jellyfish, or designing your own WOMAD T-shirt using the festival as your inspiration, and so much more, there was something for everyone. 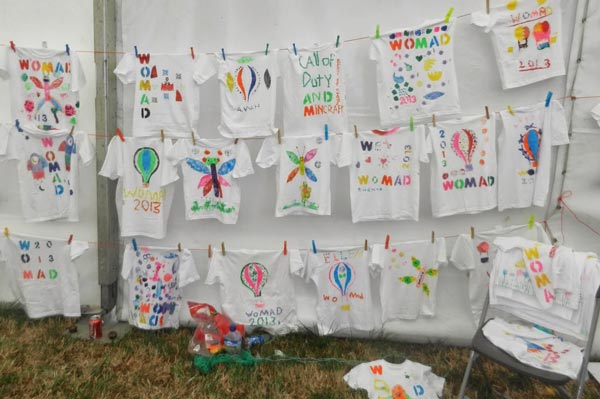 Friday was turning into a scorcher so we headed over to the Siam Tent for some much needed shade and to listen to the sounds of Huun Huur Tu (Russia, Tuva) From there a quick dash over to Molly’s Green Bar as it was time for Kids Guitar Club with the brilliant Dan Guitarman. Quite accustomed to playing the air guitar with his Daddy, Boo was now getting the chance to play with a professional and he loved it. 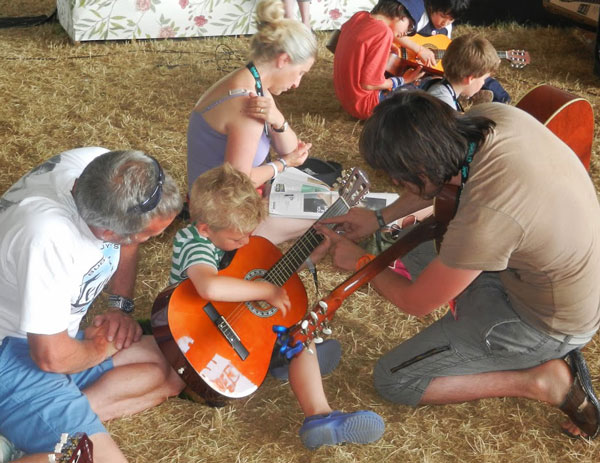 Back over to the Siam Tent and Ondatrópica (Columbia) up next, sounds of Colombian style salsa mixed with some hip hop, ska and a pinch of funk thrown into the mix makes for swaying hips a plenty!

As we were over that way it was time for today’s ride. On Thursday, when we had come across the fair we had struck a deal with Emily and Boo, one ride a day would suffice as anything more than that and we would end up spending too much. A good way to limit expectations and not have to listen to recurring pleas of can we go on ….. every ten minutes! Today it was the Dodgems and it was girls vs boys, I can’t tell you who won as there are mixed views on the result!

More music from Spoek (South Africa) and then off to get Emily a Jagua Tattoo which she was very pleased with. Lee ‘Scratch’ Perry & Max Romeo (Jamaica) next and there is something to be said for listening to reggae in the sunshine, a match made in heaven! Could it get any better than this? – it was just about to: Parov Stelar Band (Austria) became a definite highlight for us. Watching the crowds go wild and to witness people of all ages losing the ability to stand still or even manage to walk without dancing was something to behold.  As the sun went down I realised there was no other place in the world I would rather be.

That was going to be a hard act to follow but we were in no doubt that if anyone could pull it off Festival Kidz favourite Shlomo (UK) could, and of course we were proved right!  Although by now it was getting late we were determined to stay up for the next must see act on our list Heymoonshaker. After catching them at Shambala 2012 we were not about to miss them and they were certainly worth staying up for.

Being that by the time we had crawled  into bed it was after 1am we decided to ease into Saturday and a lazy morning at camp was in order. The heat was immense, a late breakfast and plenty of cups of tea and we were ready to go again. Stopping off at Firetoys for a more advanced diabolo for Boo, as he was really into performing his tricks now, we watched while lots of other WOMAD children practised their skills. 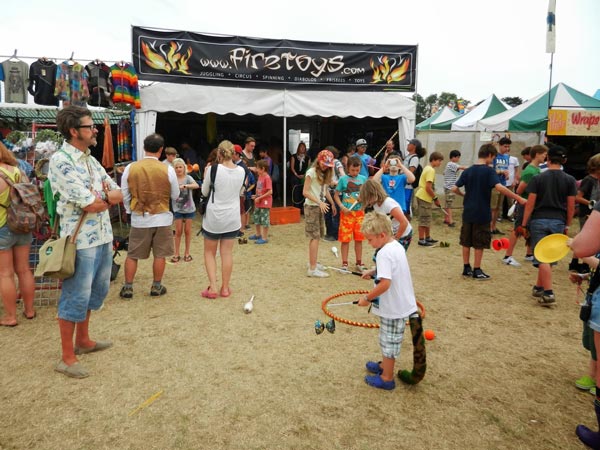 Time for some music and Bwani Junction (UK) were our first choice of the day. Listening to them from outside the Big Red Tent I made the mistake of mentioning how grateful I was for a few spots of rain as the heat was becoming quite unbearable – I spoke too soon! As we headed over to catch some Ed Harcourt (UK) at the Siam Tent there was something in the air that told us things were about to change. The wind was getting up and a storm was definitely brewing. We knew next on our list was YesKing (UK) and knowing that they were back at the Big Red Tent it made sense to head back there.

In the words of Dinah Washington “What Difference A Day Makes” listening to reggae in the sunshine yesterday but in the pouring rain today, it still made for some lovely listening though! After their set we headed back to camp as we need to change our attire. The rain was by now relentless and after changing into something warm and dry we decided that we would have tea undercover.  Spaghetti Bolognese for the kids and bacon omelette for Mum and Dad.

It was really tempting to call it a day but knowing that Arrested Development (USA) were headlining we couldn’t pass up the opportunity to tick them off our must-see list. Waterproofs at the ready and it was time to bounce to the familiar sounds of  People Everyday and Mr Wendal –  the rain couldn’t dampen this WOMAD crowd’s enthusiasm and we were so glad we had made the effort to be part of it. 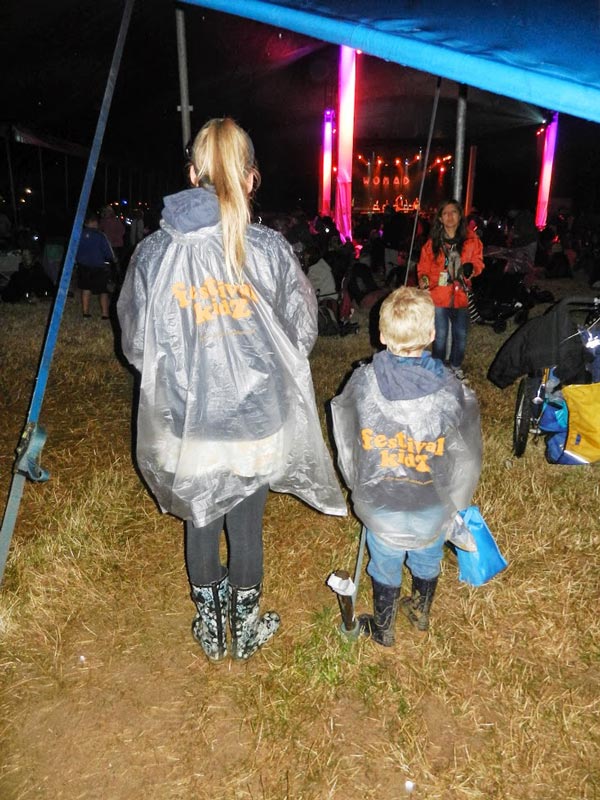 Sunday and the sun was shining again. First on our to do list were Dub Inc (France) and a bit of Dub in the sunshine meant smiles all round. Back to Carters Steam Fair and this time a ride on the swings.

Over to the fabulous kid’s area next and more making and doing. Whilst I was there I took the opportunity to pop into the breastfeeding tent and speak to Vanessa Brooks, a Midwife who was on site throughout the weekend, and meet some of her lovely guests who all seemed to be having a great WOMAD. As far as I know, Vanessa didn’t have to put any of her birthing knowledge into practise at WOMAD but if anyone knows differently it would be great to hear of any unexpected deliveries that were made! 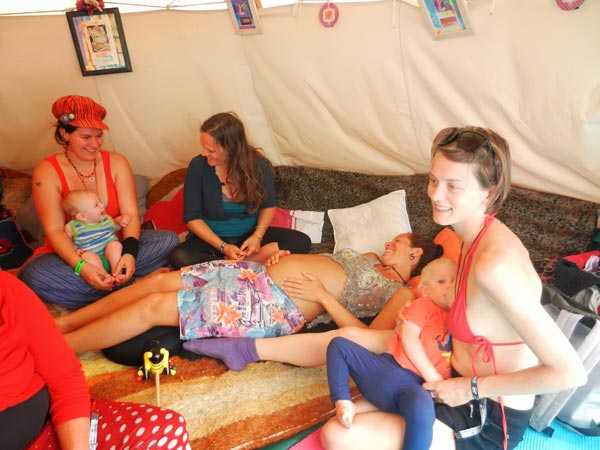 Some more music now and we were off to see Riot Jazz Brass Band another highlight for us and a great opportunity to dance and have a sing along. For anyone who was there I have this to say: “Incoming” … I bet you did it!

Even though the kids had been on the swings earlier on in the day they had missed out on Saturday’s ride due to the weather so as a treat for them, or was it for Dad? – They chose the Wall of Death. I opted to stay outside and look after our belongings, a decision I now regret, as seeing their faces when they appeared after the show was priceless. They had been well and truly ‘WOW’ed and said it was something they would never forget. 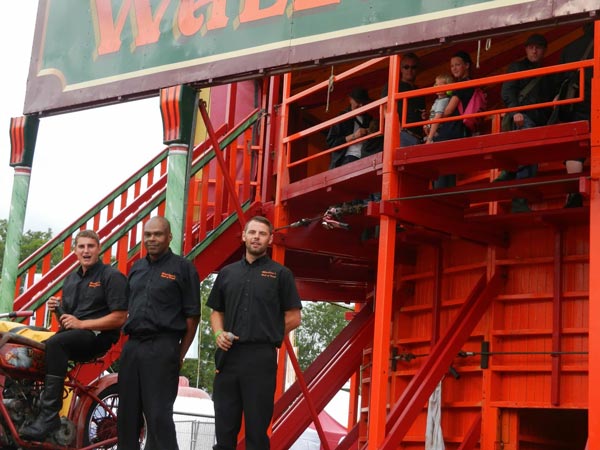 The last act of the weekend for me were The Heavy (UK) and what a way to end the weekend! If you haven’t checked these guys out I can highly recommend, I know we will be looking out for them again on our travels. Boo had decided to take up his now favourite sleeping position on Daddy’s shoulders so it was off to bed for us leaving Stuart to catch Gilberto Gil (Brazil) and me to enjoy listening back at camp with the kids tucked up and a cup of tea in hand – I’m so rock and roll!

On Monday the heavens opened again as the last piece of equipment was packed into Dolly (campervan) and for the first part of our journey we were once again on that white knuckle ride of not being able to see where we were going just as we had been on the way there.

When I asked Emily and Boo if they would like to do WOMAD again Emily’s reply with no hesitation was “a big fat yes” and Boo’s “I wish it could be WOMAD everyday” – I think that says it all!

I would like to take this opportunity to thank all the wonderful families we were lucky enough to meet at WOMAD. After speaking to lots of you about your WOMAD experience I am happy to report that when asked if you would change anything about the festival the answer was a resounding NO.  The only comment I did receive was that maybe a few more men’s urinals would not go a miss.

WOMAD I would say that you have nailed it! We hope to see you again in 2014.