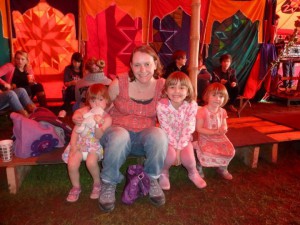 Naomi took over the running of Festival Kidz in October 2013.

She was accidentally recruited when she entered our competition and won tickets to Summer Breeze.  It was the first time she had braved a festival with all 3 of her children but she had such a positive experience that she felt compelled to write about it – and sent in a review which the then owner, Romany, loved and published. After a few more reviews Romany asked if she wanted to join the Editorial Team and Naomi accepted it as a dream come true!

Naomi’s first festival was Reading 1991 as a teenager, and she loved it, but her real love affair with festivals begun the following year at Glastonbury. Since then she’s attended around twelve Glastonbury festivals (she’s not completely sure  how many!) as well as a handful of other smaller ones. She and her husband were even married at Glastonbury in 2005 by a Shwarmi in a boxing ring (their legal wedding was a year later and although lovely was quite a lot less exciting!)

Now that she has small children she has no intention of letting motherhood prevent her festival-going. Her eldest child went to her first festival Secret Garden Party in 2008 aged 2 and Latitude the year after. Naomi’s first overnight festivals with all 3 children were 2012 *Chilled* in a Field and Shambala, and she enjoyed them so much that they went to 6 the following year!

Naomi loves a wide range of music, comedy and theatre. The whole family loves a good bit of old style dance/trance – it’s great to get out the glow sticks and turn on the UV lights. But what Naomi loves the most about festivals is the alternative ‘green field’ type fun. So if there’s a secret fire ceremony, a paddling pool car race, or a tiny ballroom dancing tent, she’ll be there!

Planning a family holiday? Why fests are best